Home » Training » Why Do I Get Itchy When I Sweat?

Why Do I Get Itchy When I Sweat?

Have you ever noticed that you are itchier after you’ve exercised?

Depending on where the location of your itching is, it could be happening for a number of different reasons.

Itching in the legs is a common sensation for runners to feel either during or shortly after exercise. If it happens to you, there’s no need to worry, as you’re certainly not alone.

If you’re wondering what causes this itching, how you can avoid it, and ways to relieve it, then keep reading… 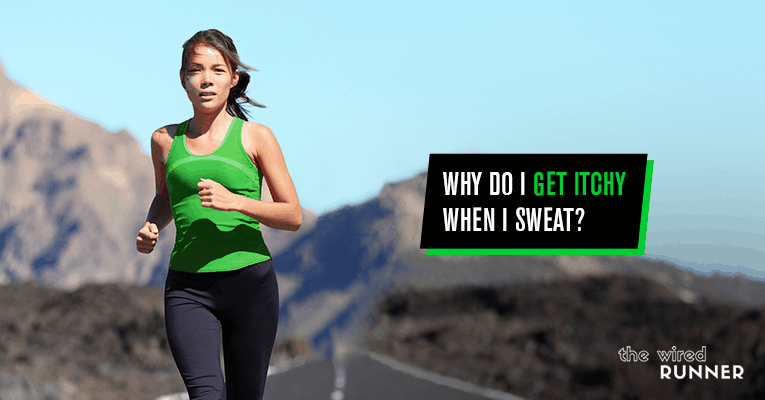 What is Runner’s Itch?

Runner’s itch is the name for an itching or tingling feeling experienced during or after exercise, usually running. It’s most often felt in the legs and stomach, but it can occur anywhere on the body.

It’s usually harmless, although it can be very uncomfortable and even lead to pain and swelling if you scratch too much. The sensation may be accompanied by welts or bumps on the skin, known as hives—cholinergic urticaria.

Runner’s itch doesn’t usually require medical help, although some people may require an antihistamine to alleviate the symptoms.

So Why Do I Get Itchy When I Sweat?

The itching or tingly sensation on your skin during or after exercise usually happens as a result of an increase in body temperature.

In many cases, the itching has nothing to do with sweat at all, although sometimes sweat can cause itching too. If you have sensitive or dry skin, the sweat can aggravate the skin and lead to itching.

Sweat can also become trapped in the pores of the skin and lead to blisters that can be itchy. This often happens when you get really hot and sweat excessively.

It’s always wise to bathe or shower as soon as possible after exercising. Not only will this cleanse your pores, but if sweat lingers on the skin—especially in confined spaces—it could lead to a growth of bacteria, which could also lead to itching.

Another possible cause of the itching is your body releasing histamines. Histamines are usually released by the immune system in response to allergens. They help to open up the blood vessels to flush out toxins, but in some cases the body may trigger this as a response to fatigue instead of an allergen.

When hives appear along with itching during or soon after exercise, it’s known as exercise-induced urticaria.

Other potential causes for itching include food allergies, environmental allergies, or reactions to medication. These are usually less common occurrences and need a specific trigger such as eating a particular food or taking medication before exercising.

If you’re prone to allergies, how do you know when the itching you’re experiencing is non-allergic itching?

There are two types of non-allergic itching: heat rash and cholinergic urticaria.

Heat rash is a common cause of itching that isn’t directly related to allergies. Sweat can become trapped in the pores, forming small blisters that can itch or burn. This occurs more often during the summer when you’re more likely to sweat excessively.

Cholinergic urticaria is when hives form on the skin as a result of the body releasing histamines into the bloodstream.

If someone is prone to allergies, this kind of reaction needs a stimulant—allergen. But in the case of cholinergic urticaria, the body doesn’t react to an allergen, but instead to the rise in temperature due to exercising.

How Long Does the Itchiness Usually Last?

The itching can last from a few minutes to 30 minutes. When you feel the itching start, you should slow down or take a break from exercising to give your body time to rest and adjust. 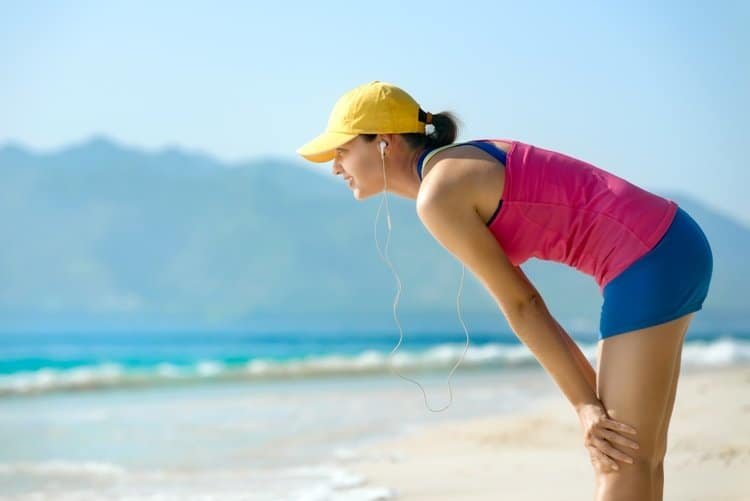 If you’re just getting back into exercise after a long break or you’re only just starting to exercise, the itching may be more intense and last longer. The more your body gets used to exercising, the less likely it is to happen.

The best way to reduce your chances of Runner’s Itch is to develop a regular exercise routine. When your body becomes used to exercise, the chances of you experiencing the itching sensation will become less and less.

If the heat makes the itching worse for you, consider wearing clothing that is better suited to the heat. More breathable apparel that can allow for better airflow could help reduce heat-related itching.

Regular and prompt showering or bathing after exercise can also help reduce the effects of Runner’s Itch.

If nothing else seems to work, you may want to try tracking your food and drink to see if there’s a pattern that could indicate a food allergy. Non-drowsy antihistamines might be a helpful measure if nothing else helps.

If you’re suffering from Runner’s Itch in your legs, there are some ways you can relieve it instead of waiting for the itching to pass on its own.

A lukewarm bath will ease the burn. Make sure the water is neither cold nor hot, as extreme temperatures will aggravate the itch. Add oatmeal to the water for a light exfoliating effect, or Epsom salts or baking soda to relieve the itch.

If the hives are severe, try applying a topical cream to relieve the itching and pain. Aloe vera gel is an excellent choice, as it has anti-inflammatory properties and is particularly soothing on sore or dry skin.

If aloe vera gel doesn’t help, you may find relief when applying hydrocortisone cream. This is a steroid-based medicinal cream that may provide relief if a natural remedy such as aloe vera doesn’t help.

You can purchase some of these creams over-the-counter, although if these don’t work then you may need to ask your doctor for a prescription for a stronger cream.

If you need immediate relief from itching and don’t have either aloe vera gel or a hydrocortisone cream at hand, then applying a cold compress could help relieve the symptoms. This will most likely have a positive effect if your itching is caused by a rise in body temperature.

The cold compress will help to regulate body temperature and cause the capillaries to contract again, taking pressure off the nerves and alleviating the itching and burning sensations.