Home » Races » When Was Running Invented? A History of the Sport

When Was Running Invented? A History of the Sport

Running is said to be the oldest sport in the world. Humans started to run over two million years ago!

Research done on fossils found by paleoanthropologists show that running shaped our anatomy into what it is today and that running was born out of a need to survive.

There are close to 60 million people who run or jog in America. Every day more people start to run, as they either want to run a marathon or have fitness goals they want to achieve.

But how did running evolve into one of the most popular sporting activities in the world? 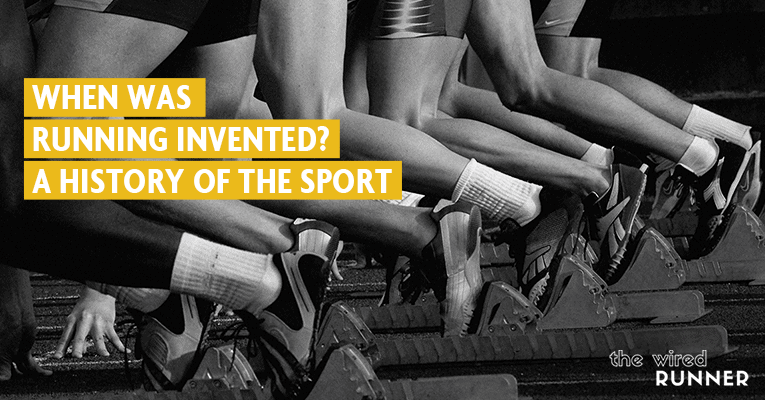 Running races – how did they start?

Running is something humans have been for as long as they have existed. Running may have been discovered as a necessity rather than invented as a sport, but at some point, it did become a competitive sport.

It is believed that competitive running began during religious festivals. One of the oldest accounts of running as a sport goes back to the Tailteann Games—between 1171 and 632 BCE—which were about honoring the dead and included “funeral games”. Running, swimming, archery, and a variety of other competitive events were held.

The first officially recorded Olympic Games happened in 776 BCE in Athens, Greece. This was also part of the celebrations of a religious festival to honor the Greek god Zeus.

We can thank Pheidippides, who was a Greek soldier, for marathons! His story has become legend—he ran from the Marathon battlefield to Athens—26.2 miles— where he announced the defeat of the Persians.

Very few know that just a couple of days before that, Pheidippides was tasked to gather the support of the Spartan troops to help the Athenians fight the Persians. Phedippides had to run over 150 miles from Athens to Sparta.

Once he delivered his message, he then had to run back to Athens to tell the Athenians that the Spartan troops were busy celebrating a religious festival and that they’d be delayed. Pheidippides was in fact an ultra runner!

To honor Pheidippides, the first marathon race was created at the first Olympic Games, from Marathon to Athens. The distance of this marathon was set at 40 kilometers—25 miles.

It wasn’t until the Olympic games were hosted in London that the distance of the marathon was changed from 40 kilometers—25 miles—to 42.195 kilometers—26.2 miles.

The extended course was to accommodate the marathon starting on the lawn of Windsor Castle and finishing in front of the Royal Box inside the Olympic stadium, as per Queen Alexandra’s request.

From then on, the mileage for the marathon remained 42.195 kilometers—26.2 miles—and the length was formally standardized in 1921.

The Olympic Games have ancient roots, as they were originally held in Olympia, Greece between 776 BC and 393 AD. We have Baron Pierre de Coubertin to thank for the modern Olympic Games, as he first suggested the idea in 1894. 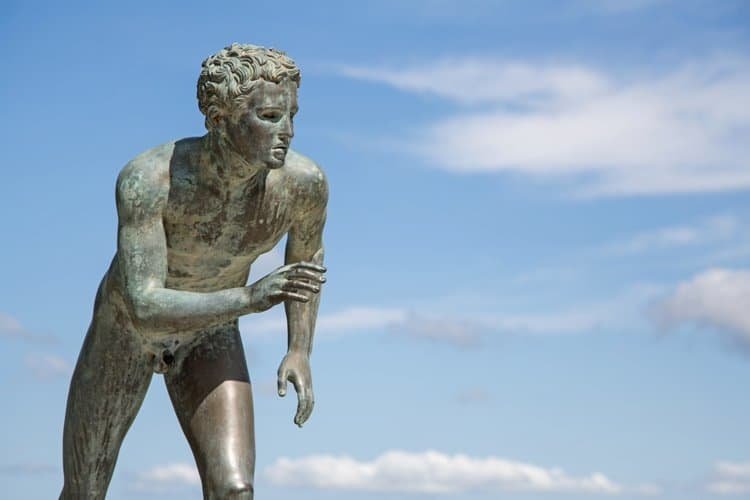 In 1986, the first modern Olympic games were held in Athens, Greece.

John Graham was so inspired by the first modern Olympic games that he created the Boston Marathon.

At first, it was called the American Marathon and the original route selected started in Ashland at Metcalf’s Mill and finished at the Irvington Oval in Boston. This route covered a distance of 24.5 miles—39.42 kilometers.

The Boston Marathon is the oldest marathon in America and is known as being one of the most prestigious running events. Every year runners from around the world take part in this marathon and tick it off of their bucket list.

The summer Olympics in 1908 was held in London and is also one of the most iconic marathons in history. This is where the official marathon distance was born, as the marathon started on the lawn of Windsor Castle as per Queen Alexandra’s request.

It’s also the race where the Italian long-distance runner, Dorando Pietri, won the hearts of many. While his pace may have been slow in the first part of the race, he started to pick up his pace at the 20-mile mark and moved into second place.

When he reached the 24-mile mark, he passed Charles Hefferon—a South African runner—but as he neared the last mile, he was experiencing severe dehydration and fatigue.

Dorando took the wrong turn as he entered the stadium and he fell. Race officials were there to help him to his feet and point him in the right direction, but he fell another four times.

Each time he fell, the race officials helped him back onto his feet, where he crossed the finish line in first place, exhausted. American runner Johnny Hayes finished second, but the American team lodged a complaint with race officials and Pietri was disqualified for receiving help.

Johnny Hayes was awarded the gold medal, but due to the public outcry for Dorando Pietri, Queen Alexandra awarded him a gilded silver cup.

Even though the first seven modern Olympics had six different marathon distances, 1909 was the year where marathon running grew in popularity. It’s also the year that’s known as “Marathon Mania”.

Some races had just 150 runners, but the streets were lined with thousands of supporters at the Brooklyn Marathon. 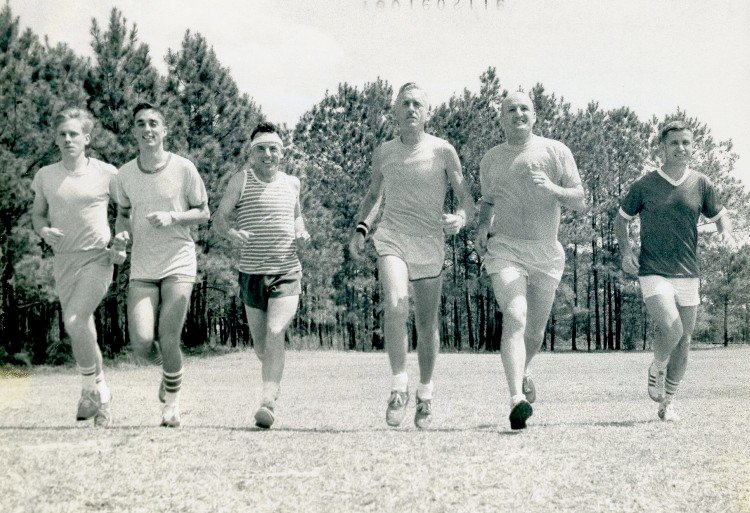 The first five marathons that were held in New York were also held on special days, like Lincoln’s birthday—12 February. Marathon runners started in Crown Heights and ran to Sea Gate and back, covering a total distance of 26 miles.

But marathons were also run on Thanksgiving Day, the day after Christmas, New Year’s day, and on Washington’s birthday.

It also took 13 years before the International Amateur Athletic Federation—now known as World Athletics—adopted the standardized marathon distance from the Olympics held in London in 1908.

Although the first marathon only had 8 runners, it quickly grew in popularity and was soon recognized as being one of the world’s top marathons, alongside the Boston Marathon.

It was also known as the “Marathon of Freedom” between 1945 and 1952 when it went back to its original title of Kosice Peace Marathon.

The 1936 Olympics that were hosted in Berlin started to see a change in footwear. Runners like Jesse Owens were wearing Adidas shoes with spikes.

Although the running shoes with spikes had also made an appearance in the 1928 Olympics—Lina Radke—they gained popularity when Jesse Owens ran in them.

The inaugural race of the Fukuoka Marathon was held in Kumamoto and is the third oldest marathon in Japan. Originally, only locals could take part in the race, which took place in different locations across Japan.

There are very few marathon runners who can say that they not only set a world record and won a gold medal, but they did so while running barefoot. But that is what legendary Ethiopian Abebe Bikila did at the 1960 Olympics in Rome.

Abebe Bikila ushered in the generation of East African marathon runners that we see dominating and breaking records today.

Derek Clayton was no stranger to breaking records and always pushed himself harder in the next race. He set a world best time of 2:09:36.4 in the Fukuoka Marathon in 1967. This was the first marathon that had ever been run in less than 2:10. 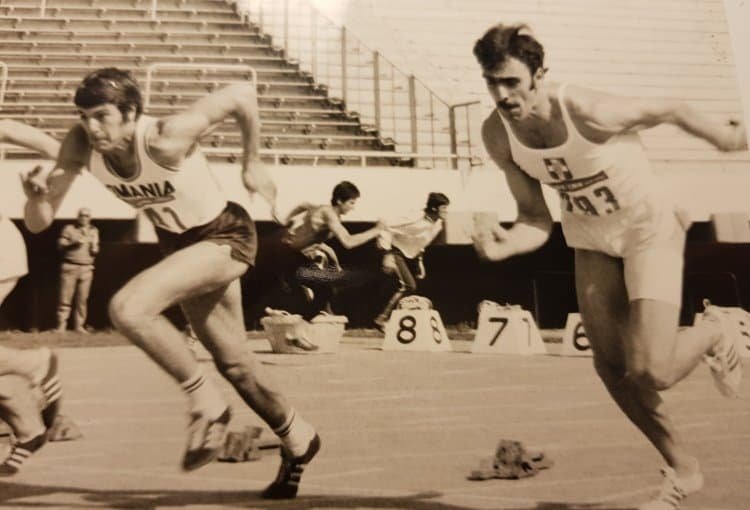 For the next three decades, runners would shave seconds off the time Derek ran. Eventually, almost three minutes were shaved off of the men’s world record.

At the 1972 Olympics that was held in Germany, Frank Shorter took home the gold after running the marathon in 2:12:19. Frank’s victory at the Olympics inspired about twenty-five million people to take up running, which is also known as the “Running Boom of the ’70s.”

He even inspired President Jimmy Carter to take up running as a hobby! Frank Shorter was never able to break his PR of 2:10:30.

The 1984 Olympics was hosted in Los Angeles, California, and it was also the first time that it featured an official women’s marathon.

While extensive research has been done on the effects of long distance running and hydration, we’ve also seen a rise in sports nutrition products and sports drinks to help runners.

But sports energy gels can be traced back to a product called Leppin Squeezy, which was produced in 1986.

During the 1988 Ironman Triathlon in Hawaii, triathletes had access to Leppin Squeezy and the popularity grew from there.

Today, there are a number of brands that are manufacturing a variety of products, from gels and jelly beans to gummies. These are an effective way to refuel and replace carbohydrates and electrolytes while you’re on the move.

Eluid Kipchoge is a legend amongst runners. He’s an Olympic marathon champion and he has been setting world records.

Who could forget how close he came in Berlin in 2018 to breaking the two-hour marathon time? While he set a world record with a time of 2:01:39 at that marathon, he dared to push himself further.

Eluid has inspired people around the world to take up running and to challenge their own limits.

Running has grown in popularity and it continues to become a favorite among people. If we look at the number of marathons that were scheduled throughout the U.S in 2019, you’ll find that there were 715 on the list.

Each year more and more runners cross the finishing line of these marathons, which shows that running is just as popular now as it was in 1909.

Training Tips for Walking a Half Marathon