I’ve been there. As a new runner, you wonder how in the world you’re going to be able to spend 30+ minutes running. What are you supposed to think about???

The good news is that with a little bit of practice, you can become a pro at making the miles fly by. Start by incorporating these tips on what to think about when running. Come up with your own, too, and figure out what’s best for you. Not everybody is the same, but one thing is always true: distance running is a mental challenge as much as it is a physical challenge.

Here are some tips on how to up your mental game. 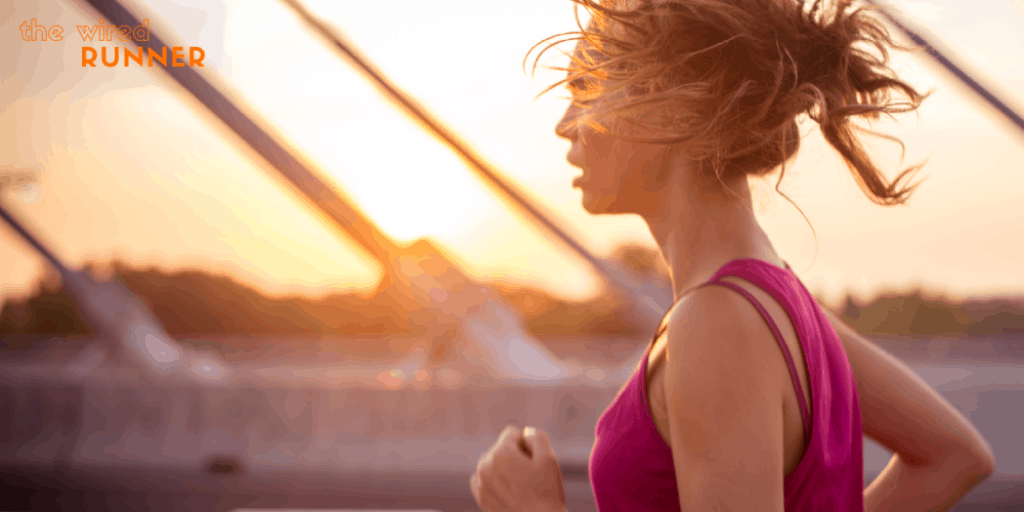 Don’t Think. Instead, Be Mindful

Some of my runner friends can tune out their brains so quickly and blaze through the miles. They just go on autodrive. I am definitely not that way—I’m always thinking.

For me, that means that sometimes the miles are painfully slow, because I can’t just space out. When that happens, if I can’t get my mind thinking about something else, I try to focus on my running form, breathing, and cadence. Focusing attention on your body like this is a basic form of mindfulness and meditation. It’s not easy at first, but with practice, is can become a central part of your running.

If focusing on your breathing is a little too zen for your taste, try some other menial mental task. Sometimes I’ll count in my head (or even out loud) to make the time go by faster. Occasionally I’ll play a game, especially when I’m doing sprints, where I count a certain number before I let myself look at my watch to see if my sprint is done.

I try to make the number I’m counting to last just slightly longer than the sprint I’m trying to do. For example, I count to 150 during a ¼ mile sprint because there’s a good chance I’ll have reached 0.26 or 0.27 miles by the time I’m done counting and have done just a little bit more.

Mantras for Tough Parts of Your Run

I also will use counting and mantras when I’m going through tough parts of my run. Hills are the bane of my existence, and I normally have to motivate myself to keep running through them. I’m sure many of you are the same way.

My go-to mantras normally center around gratitude. I have people in my family who are older and can barely walk, so I’m fortunate to be able to run. I’ll say things to myself like, “It’s a gift that you’re able to run” and “Life is precious. Tomorrow is never guaranteed.”

I know other people who prefer one word phrases like “belong” or “push.” You have to figure out not only what phrase or word is best for you but also what tone. I prefer to be gentle with myself because I’m already a perfectionist.

You, on the other hand, may need to be harder on yourself. Obviously, this is what the military thrives on to push individuals through runs and other challenging exercises. Figure out if you prefer the nice or harsh mantras and start incorporating those.

Food You Want to Eat/Make

I love to make food, so this is one of my favorite things to think about during a run. I love thinking of meals I can make in the upcoming days, or desserts that I want to try. Running is definitely a time for me to meal plan.

I also think about Louis Zamperini’s comment in Unbroken that talking about food and going through the steps of a recipe is one of the ways that he stayed mentally alert stranded for so many days on that lifeboat surrounded by sharks in the Pacific Ocean.

I’ll sometimes run through the steps of recipes that I love—bubble tea is one of my favorites—so that I stay mentally alert during my run just like Louis Zamperini.

I definitely go quite in-depth with food, but you could just think about what you’re going to eat for breakfast, lunch, or dinner. For most people, that’s probably more than sufficient.

Interesting Things You See on Your Run

This can be a fun one. Depending on where you’re running, you might have beautiful views of nature, or you might get to people watch. That’s always fun, because you look at what is the most popular color for shirts that day, what type of people are out, and so forth.

I sometimes like to play a version of “I Spy” with myself. If I were running with someone else, what might I pick as my object for “I Spy.” Then I’ll survey the landscape, select something, and then begin to describe the object in my head without saying what it is.

Sometimes I’ll focus on all the birds and wildlife that I see. My sister is a huge birder, so I try to get as detailed a description as I can of birds that I see so that I can tell her about them, especially if it’s a bird that I’ve never seen before.

Coming Up With the Perfect Response

For some people, winning arguments isn’t their thing. But for those of us who enjoy discussions and debates, running is the best time to come up with the perfect response. You can work through different ways to say something and make your point.

And if you’re running for longer than 30 minutes, you have so much time to make sure that you have the best response by the end of your run. More broadly, running can also give you the time to think through what you believe.

If there are things you’ve been trying to figure out in your belief system, you can work through them when you run. The great thing about running is that you have so much extra time to think or listen to music, podcasts, and books. It really gives you a chance to be alone for a short time during the week.

Solving a Problem at Work or in Your Personal Life

Depending on the day and my mood, using runs to solve a problem at work or in my personal life can be a really good use of time. I am a freelance writer, so I distinctly remember one run in March when I had just taken on my largest project and was pretty overwhelmed.

I went for my run that day and began to dissect the project into manageable pieces, figuring out the step-by-step process I planned to take in order to be able to complete the project in the two-week timeframe.

Without my 8-mile run that day, I don’t think the project would have gone as well. Plus, my run went by super quickly, because I was so busy trying to figure out how to solve my problems at work.

I’ve also used running to work through problems in my personal life. The last year of my life has been one of the most challenging—which is actually why I got into running in the first place—and I’ve used runs to think through pain I’ve experienced as well as what I can do differently going forward.

This suggestion definitely isn’t for everyone, but if you’re like my brother-in-law, who is getting a Ph.D. in mathematics—he’s ABD, all but dissertation now—and who loves to run, I can guarantee working through math/logic problems on your run is the way to go.

I’m definitely not as advanced with numbers, but I do love statistics and data. Sometimes during my runs, I’ll figure out what my average minute-per-mile pace is, or when I should finish based on my times.

I’ll do calculations based on my previous runs and figure out how much faster I’d need to run now to get a particular pace. But most of my math all deals with the run or running itself.

One of my favorite things to do at the very end of a longer run is count down the minutes. I tell myself I have less than 30 minutes to go, then 15 minutes, then 10 minutes, and finally 5 minutes. That always feels good!

Thinking About What Races to Sign Up For Next

If you’re trying to make a big change in your life and you decide to sign up for a race and train for it, there’s always a chance that it will be a one-time thing. But there’s a good chance that you’ll catch the bug like I did, and now your runs will turn into times where you think about your upcoming races.

This is the sandbox, as one of my professors in college called it. Dream big about where you could run and distances you’d like to complete. Most likely, you won’t end up going to half of the races you think about, but hey…it’s fun to dream.

I tend to think about all the races I’d love to run overseas, like the Berlin Marathon or a birthday-weekend, Caribbean-island half that has a finisher medal the size of a dinner plate (crazy, right?). You might even imagine yourself running one of those races or crossing the finish line, and that’s sure to keep you going.

Listing The Things You’re Grateful For

I saved this suggestion for last because it’s the one I use most often. And it’s the best one, in my opinion. At the end of the day, to be able to run is a huge gift. You are in good enough health that you can do so, while so many people aren’t and would love to be in your place.

I had experienced some painful events in my life while preparing for a half marathon in May, and the runs, even the shorter ones, were mentally hard. I tended to focus more on the pain—both in my life and on my runs—but that all changed when I started focusing on gratitude.

I remember running one day on a treadmill at a hotel in Indiana, waiting for my sister to deliver my nephew, and I felt so discouraged about everything. So I started thinking, “If my sister can handle childbirth, surely I can run five miles.” I began to list things I was thankful for.

My run went incredibly well, and I saw the impact that gratitude had on my running. I was determined to keep it up, so it’s now a part of my running routine. I start off with things I’m grateful for, and I come back and list more things every time I get discouraged during my run.

It’s amazing what gratitude can do in your life, whether on a run or just in general. It helps you see all the positive things, even if it’s true that you have a lot of negative stuff going.

Gratitude will change you as a runner and as a person. If you don’t incorporate any suggestion except this one into your running routine, you’ll still reap the largest benefit, make the miles fly by, and just feel amazing overall with a dose of thankfulness.