A triathlon is often the next step up for runners who are looking for a bit more of a challenge. It consists of three disciplines; swimming, cycling, and running.

Those who aren’t sure about swimming might go for a duathlon first, which adds a cycling leg sandwiched between two running legs.

Most runners can make the transition to a duathlon or triathlon fairly easily with a bit of extra training in the swimming and cycling disciplines.

But what about a quadrathlon?

If you’re a triathlete looking for something new, interesting, and challenging, keep reading. You may find that the quadrathlon is appealing and offers a new challenge! 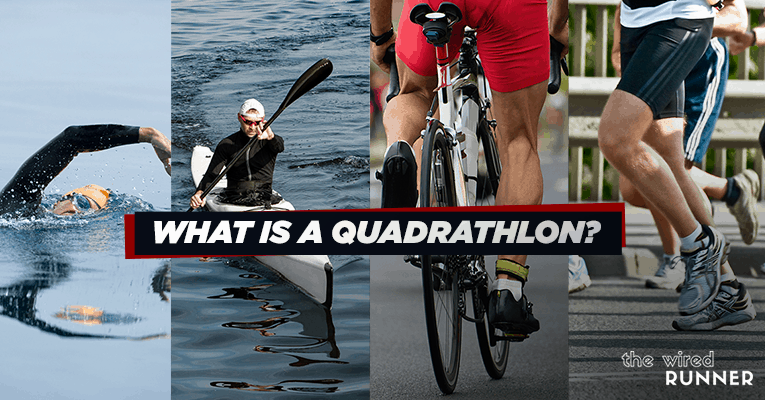 Just like a duathlon has two sports and a triathlon has three sports, a quadrathlon’s name gives it away. It’s a four-discipline event, consisting of:

Usually, this is the order in which the events are completed, although there’s no official standard. In some cases, the order may differ.

It’s also possible that the events may change depending on the organizers, the location, and the weather.

Places that have cold winters and get snow may replace the swimming and kayaking legs with snowshoeing and skiing.

As you might expect, the quadrathlon came after the duathlon and triathlon. The first one happened in Ibiza in 1987, but it wasn’t exactly a roaring success.

It took three years for the first quadrathlon organization to be established, the World Quadrathlon Federation (WQF).

The European Quadrathlon Federation (EQF) was created in 1997. Some time later, the British Quadrathlon Association (BQA) was formed.

Since the inception of the quadrathlon, huge competitive events have become popular. The WQF began holding a World Cup in 2001, and the BQA hold a British National Trophy Series.

Today, quadrathlons are still not quite as popular as triathlons but they’ve gained a lot of momentum since their beginnings in the 1980s.

There are various quadrathlon lengths, depending on the event and the location. The first quadrathlon events consisted of a 3.1-mile swim, a 12.4-mile kayak, a 63.1-mile cycle, and a 13.1-mile run. That’s quite a workout!

Today, you can choose from three different distance events: sprint, middle distance, and long-distance. The longest distance is true to the original quadrathlon distances.

The sprint is the best way for beginners to get used to the four-sport event. Its distances are as follows:

Once a sprint starts to become too easy, the middle-distance quadrathlon is the next logical step. Here’s what you can expect:

Those who have the stamina and strength can do the long-distance event, which follows the same distances as the original quadrathlon back in the 80s.

What Disciplines Are in a Quadrathlon?

The swim is usually the first event of the quadrathlon. It takes place in open water, often river-based but sometimes in a lake or even the ocean. This obviously depends on the location.

The majority of quadrathlon events vary between swim distances of 0.3 and 0.93 miles (Olympic distance). Long-distance events are less common. 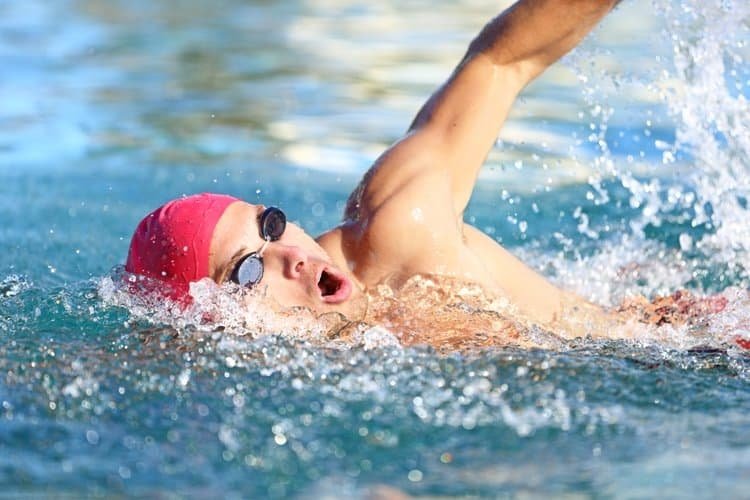 Like a triathlon, competitors may wear wetsuits if they want to. Athletes may rest and stand in shallow water or lean on a flotation device at any time.

Following the swim is the kayak leg. Distances typically range from 2½ to 5 miles in the sprint to mid-distance events.

The body of water on which the kayak takes place really depends on the area. Canals, lakes, and rivers are common. The distance can be covered in one straight line or in laps, depending on the size of the body of water.

Kayaks are sometimes available for hire at the quadrathlon venue. Athletes may bring their own, borrow from others, or rent. As long as it features an airtight bulkhead or has space for a life jacket or flotation device, you’ll be good to go.

Cycling legs usually take place on roads, but on occasion events may contain an offroad bike leg instead. Some events even do cyclo-cross. This generally depends on the area, but offroad cycling is much less common.

Drafting (riding in another’s slipstream) is not allowed. Neither is blocking, which is riding within 3 meters next to each other. This is only allowed when passing and should be done within 15 seconds.

Other rules of the road must be followed, including stopping at stop signs and traffic lights and keeping as far right as possible.

Any time competitors are on their bikes on the race site, helmets need to be worn and securely fastened.

The run may be on the road, on a trail, or even coastal terrain. If your legs are giving in at this point, you are allowed to walk or jog lightly.

It’s important to know that there are certain rules and regulations for each leg that the World Quadrathlon Federation has put together.

Each leg has its own rules (which we’ve spoken about above), and there’s usually a pre-race briefing to explain the specifics of the race.

Here are some general rules you should know:

If you do end up breaking a rule, your number will be called by a race official. At this point, you’ll need to stop and await instructions.

You may be given a verbal warning, a time penalty, both, or a disqualification, depending on the severity of your rule-breaking.

You have the right to appeal, and you may also protest other competitors’ behavior or anything about the course that you find to be unacceptable.

How To Get Started

Generally, athletes who attempt a quadrathlon have already got a significant amount of triathlon experience. In fact, we recommend that you get a few triathlons under your belt before even considering a quadrathlon. 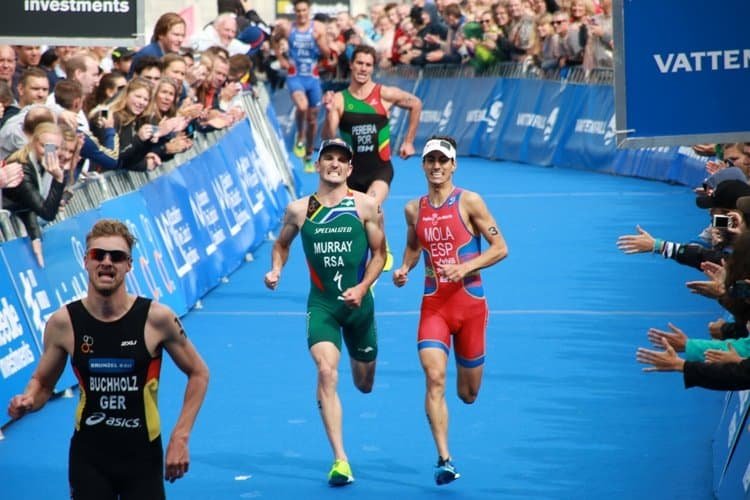 While getting your triathlon experience in, we suggest joining a kayaking club. This is the discipline most athletes will have the least experience in, so you’ll most likely need to work on it before leaping into a competitive event.

Joining a club is an excellent idea as you’ll be able to experiment with a variety of different kayaks, paddles, and techniques. This will help you to find the right one for you so when you do get into a competition, you’re using equipment that’s easy to handle.

Also, until you have an idea of how much you enjoy kayaking and what level kayak is suitable, you shouldn’t buy your own. Clubs may rent out their kayaks, or some helpful club members may even be nice enough to lend you theirs.

It’s just one extra discipline, but some serious training is necessary if you’re not an experienced kayaker. Here’s what we suggest you do to be well-prepared when you hit that starting line.

Learn How to Kayak

You can’t just hop in a kayak and paddle for 2 to 5 miles if you haven’t had some training! 2 miles may not seem like a far distance, but we highly recommend doing some kayak training beforehand.

It’s more than just staying up and moving forward. Joining a club will allow you to learn kayak skills, and also offer both interval sessions and endurance training. Both of these are important for a quadrathlon kayak session!

Beginners who don’t learn proper kayaking techniques often use only their arms to paddle. To get more powerful strokes, you should be using your core and legs!

You’ll also get the chance to train on water that’s similar to what you’ll be on during your event (if you train in the same area). Remember, kayaking in river water and on the ocean are quite different!

It’s an excellent idea to be training on the type of water you’ll be competing on. A kayaking club may give you the opportunity to train on a variety of bodies of water.

It’s hard to find these things out unless you get proper training. Without it, you may be able to paddle the full distance, but you’ll end up with fatigued arms and a much longer time than you could be achieving.

Work On Your Transitions

Transitions are as important in a quadrathlon as in a triathlon. Maybe even more so, because instead of just a bike, you now have a kayak too!

In fact, transitions are often called the “fourth discipline” in a triathlon. It would be considered the fifth discipline in a quadrathlon!

It’s a great idea to practice getting in and out of your kayak before you head into competition. This is called “portage” in kayaking lingo. 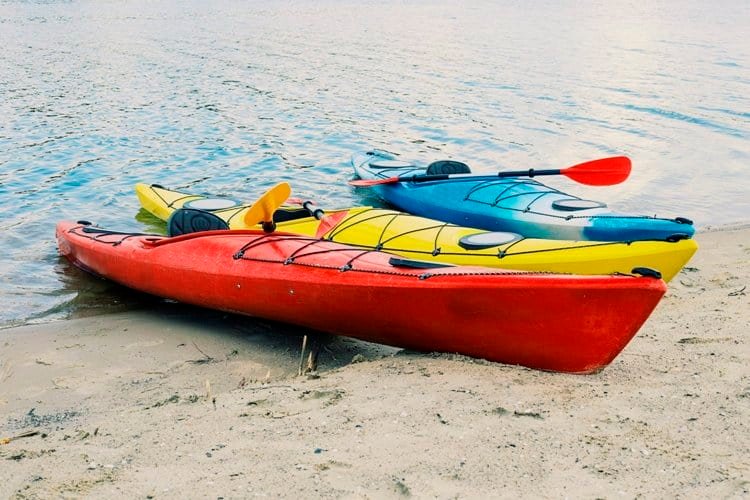 Officials will direct you to your space so you can set up your transition zone with your important items.

Remember that you aren’t allowed to get on your bike in the transition area. You’ll need to wheel it to the designated mounting area and go from there.

In order to strengthen the muscles that you’ll use during kayaking, it’s great to add rowing to your cross-training.

Some kayak clubs and most gyms have rowing machines, which are excellent for working on your form and strength even if you can’t get on the water.

It’s also a great idea to row the distance that your quadrathlon event is going to be. That way, you’ll become accustomed to sustaining the motion for an extended period of time.

Here’s what you’ll need to invest in if you’re planning on taking part in quadrathlons on a regular basis.

Your regular triathlon equipment will also be used in a quadrathlon. Your base layer usually consists of a tri suit and triathlon watch, and from there you should add your accessories.

Not all of these will be absolutely necessary. But they can make your event easier and improve your performance.

If this seems like a lot, you should consider buying a transition bag to keep all your items safe and in order.

Being organized from the start also helps to calm your mind and reduce race anxiety!

Apart from your normal triathlon gear, you’ll need a kayak. Check if there’s an option to hire a kayak at your event, or if you need to bring your own.

If you need to take your own, you can rent one or borrow one, possibly from a club or from a friend.

As long as it meets the WQF’s standards (mentioned above) you’ll be fine.

You can’t kayak without a paddle. Generally, when you hire a kayak it will come with a paddle.

But double-check this before you head off. You don’t want to arrive at the event only to realize that you’ve left your paddle behind!

A life jacket or other buoyancy aid is a necessity. Considering you’ll be spending half of the race on or in water, you can’t afford to neglect this item.

If you’re a beginner, put your life jacket on before you leave the transition area. Should your kayak turn over, you’ll be glad for the extra protection!