Home » Races » Marathon » What Is A Marathon Pacer?

What Is A Marathon Pacer?

If a marathon is on your list, no doubt you’ll be preparing for it long in advance. You’ll most likely have a detailed marathon training plan put together, have your gear checklist for race day, and hopefully chosen an outfit.

You’ve probably even taken a look at the course and developed a race strategy. And if you are running a medium to a large marathon, these races often provide a unique way to manage your pace: a pacer!

But what is a marathon pacer, actually? And how can you use a pacer to make your run easier?

We’ll tell you all you need to know in this article! 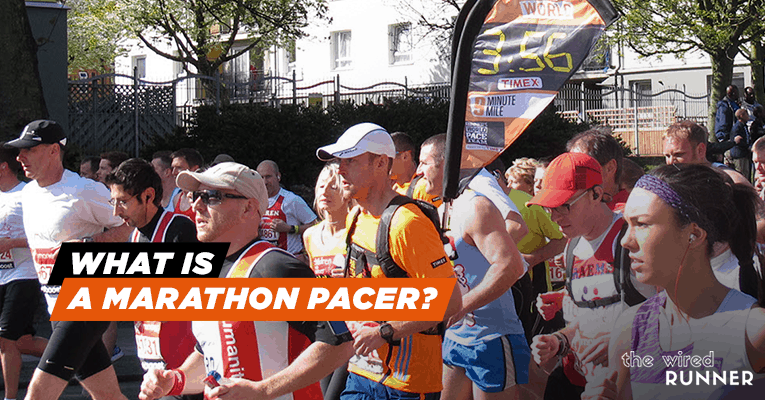 What is a Marathon Pacer?

A marathon pacer is a runner who runs the race at a specified pace. They’re an experienced runner who can consistently set this pace for the entire 26.2 miles.

You can usually spot a pacer pretty easily in the start zone. They’ll be wearing a shirt that’s marked so you can see them easily, and they also often carry a running pack with a tall flag in it, so you can spot them as you start the race.

There are usually between 10 and 15 pacers in each race. Each one has a set pace that will result in a specific finish time. For example, one pacer may be set to a 4-hour finish time, while the next will be set to 4:15, the next 4:30, and so on.

It’s as simple as finding the pacer that’s in the time zone you’re aiming for and sticking with them throughout the race!

Pros of Running with a Pacer

1. Prevents You from Starting Too Fast

Less experienced marathon runners can easily fall into the trap of starting too fast. Starting fast may mean you have the race of your life and maintain that pace the entire time.

But more likely is that you’ll run out of energy later on, often to the point that you finish with a worse time than if you started slower.

A pacer helps you to stick to a steady but effective pace from the start. You can always speed up later on to meet your goals.

Following the pacer will help you to do equally well in both halves. If you’ve got a particular time in mind, this will help immensely.

3. They Can Help Set Records or PRs

In fact, many professional marathoners have hit their best times by using a pacer. Some have even hired two pacers, one for the first half of the race and one for the second half.

If the pros use pacers to break records, you can too!

4. Less Need to Check Your Watch

Do you find yourself checking your watch every few minutes to make sure you’re on pace? Following a pacer means you don’t have to do that!

There’s nothing specifically wrong with checking every now and then. It doesn’t slow you down, but it can break your focus just slightly. 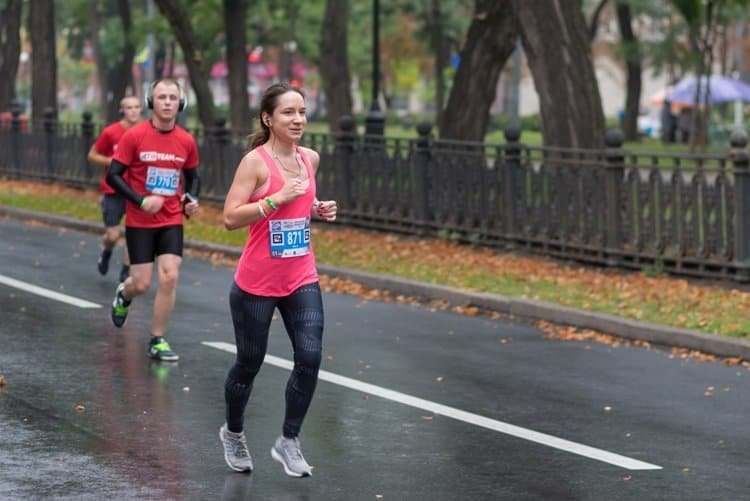 Running with a pacer means you don’t need to check your watch to know that you’re on pace. As long as you’ve got eyes on the pacer, you know exactly how fast you’re going.

Pacers are usually very familiar with the marathon course. They know the twists and turns, and they also know which sections need a bit of extra effort and when they can ease up and save energy.

If you don’t know the course that well, running with a pacer will give you a blueprint for the race that you can just follow as you go.

6. You Won’t Be Weaving In and Out of the Crowd

Pacers are usually runners who have plenty of experience. They know exactly how to keep pace, and they also know that encouragement is essential!

They’ll often offer plenty of encouragement and motivation throughout your race, and help you get through the harder parts of it with plenty of inspiration.

Cons of Running with a Pacer:

While a pacer can be super helpful, not everyone will be comfortable running with one.

Here are some cons you can expect when running with a pacer.

1. Not All Runners are the Same

Not everyone will be comfortable following the pacer for the entire race. The pacer knows the course and has planned for hills, curves, and anything else it might contain.

He or she might slow down at certain parts of the course and speed up in others – all to keep the right pace during the race. They’ll also run even splits.

But this might not be how you trained. Perhaps you’ve spent your entire training working on a relaxed first half and a powerful second.

Or maybe you’re the type of runner who likes to take it mile by mile, slowing down here and there to shake out the muscles and hitting it hard when you feel that you have some extra energy.

If you’re one of these runners, a pacer may feel restrictive. If you feel restricted during your race, you’re not going to be running at full capacity.

If you’re with a pacer that’s slightly above your usual race pace, you may find yourself struggling to keep up.

Putting pressure on yourself might work for some runners. But for many, this isn’t a great way to start your race!

Pushing yourself to keep pace could result in overexertion, which could lead to injury, fatigue, and psychological breakdowns.

It can be easy to get stuck in a group with a pacer that’s hitting your ideal pace, but if you haven’t trained for and made sure you can handle it, that pace may be too much for you. 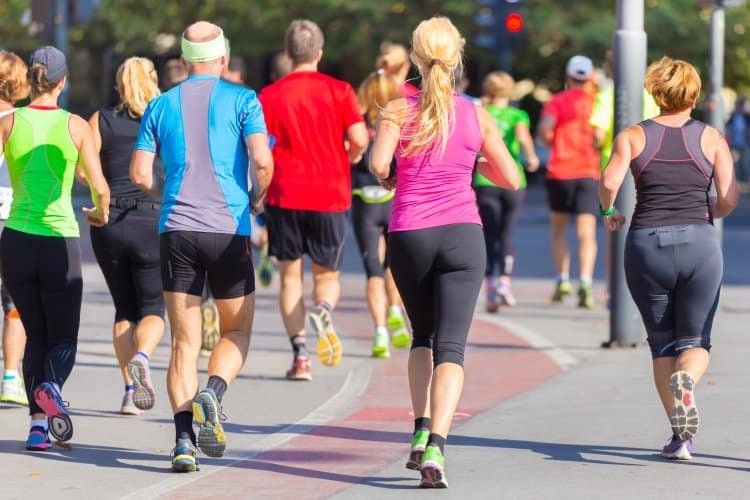 In the same vein, you may find it frustrating if you start in a pacer group that’s too slow for you. You can always speed up or slow down to meet the next pace group, but it can throw you off if you begin in the wrong spot.

But less experienced pacers, pacers having a slightly off day, or pacers on a very hilly course may veer from their pace.

If you’re aiming for that particular time, you’ll need to double-check on your own watch every now and then to make sure you’re on track.

What Happens if I Can’t Keep Up with My Pacer?

If you can’t keep up with the pacer you chose, no worries! Simply slow down and join a slower pacing group as they reach you. Usually, pacing groups are 10 to 15 minutes apart.

If your current pacer’s a little too fast, just fall back and wait 10 minutes for the next group to come along.

It’s absolutely nothing to worry about if you need to switch to a slower group. Rather switch and run or walk a comfortable race than try to keep up and end up injuring yourself!

Do Pacers Run the Whole Marathon?

Pacers usually do complete the full marathon. That way, you have someone to follow throughout the entire race so you don’t have to worry about them disappearing halfway through.

Are There Marathon Pacer Rules?

There are! When you’re a pacer, there are some specific rules you need to follow. They’re mostly about not helping runners during the race!

Pacers may carry their own water, snacks, and fuel during the race. But they’re forbidden to carry anything for other runners. Not food, fuel, water, or even clothing. This is known as muling!

Pacers are also not allowed to provide any kind of physical assistance to runners. The only thing you can do as a pacer is giving encouragement.

If pacers are caught helping a runner, both the runner and the pacer can be disqualified from the race.

It’s worth knowing that in some racers, muling is allowed. But it’s best not to get into the habit because certain races will definitely not allow it.

How Do You Become a Running Pacer?

Not just anybody can choose to become a pacer. You need to be a very experienced runner and be able to show some kind of credentials or racing history to prove that you can sustain a particular pace for an extended period of time.

Most running pacers do it on a volunteer basis. Elite athletes may hire a pro pacer, which will be a runner with a proven track record of hitting specific times and keeping to a particular pace.

If you’re interested in becoming a pacer, you’ll need to find out who puts together pacing teams for the bigger marathons.

For example, Nike is the sponsor behind the Chicago Marathon’s pacing team, while Runner’s World puts together the pacing team for the London Marathon.

Your best bet is to check the individual races’ website to see if there’s any info about becoming a pacer. Remember to do this quite a bit in advance!

Everything You Need to Know About Walking a Marathon