What Is A Beer Mile?

When is a mile not a mile? When it’s a Beer Mile!

There’s nothing wrong with enjoying a few beers now and then, even if your fitness and health are important to you.

But have you ever mixed beer and running? If not, you may be curious about the beer mile event. If yes, then you’re definitely going to want to try this! 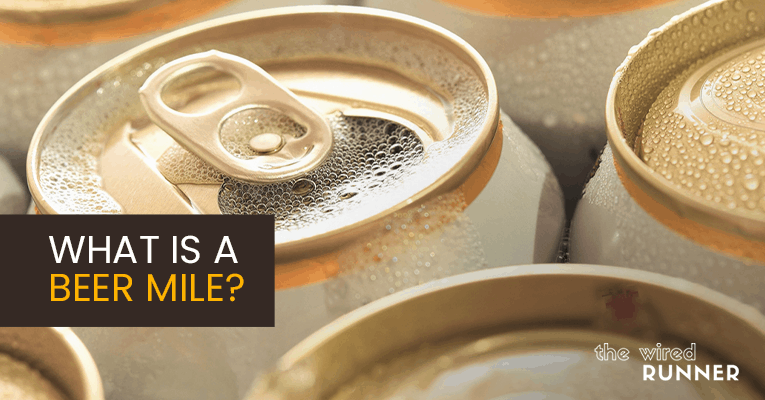 What is a Beer Mile?

A beer mile is a mile-long race with a twist. The objective is to finish the race, but you won’t be running on glucose and energy gels – you’ll be full up on beer.

These races usually take place on a ¼-mile track. Participants are required to down a full 12-ounce beer before each lap, equating to four beers and four laps!

The History of the Beer Mile

The idea for the beer mile was born in Ontario, back in 1989. It began like many ridiculous but fun things do – with a bunch of friends sitting around drinking beer.

In this case, they were catching a celebratory beer after a run and talking about the idea of combining two things they enjoyed doing – drinking beer and running.

It didn’t take them long to come up with the beer mile idea, and then they were off to the track to test it out.

One of the chaps only made it through three laps before throwing up, bringing about the first beer mile rule – an extra lap if you vomit.

Since then, others have caught onto this idea and the beer mile has taken off across the world! They even have two Beer Mile World Championships per year!

Rules vary by region, but these are the main ones to be aware of.

The rules can vary by region, or by the event. The public has been very creative in coming up with their own versions of beer miles!

If you’re interested in some other ways to make this kind of event work for you, here are some unique variations.

What Happens To Your Body During a Beer Mile 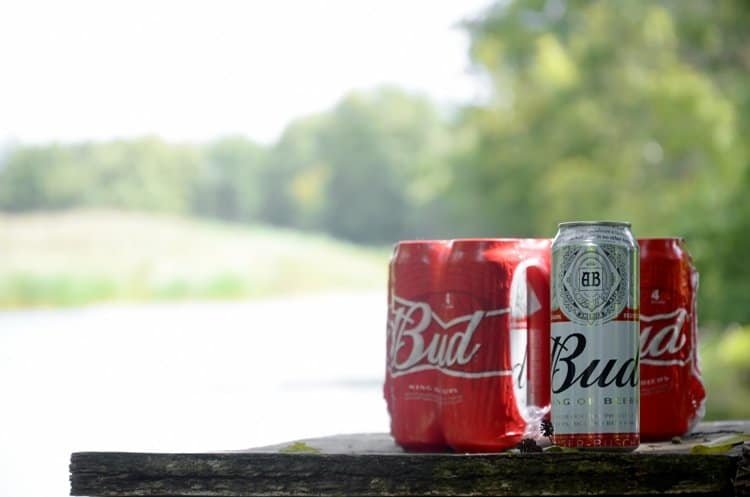 Here’s what goes on in your body during a beer mile. It’s worth learning all the possible effects before you choose to partake in one of these events!

A 12-ounce beer takes up about 1 ½ cups of volume in your stomach. Your stomach only has a capacity of about 4 cups of volume, so you can imagine how this is going to go!

Within the first minute of drinking your 12-ouncer, some of it passes through the lining of the stomach and enters your bloodstream. This is what causes those initial feelings of euphoria and inhibition!

Much of the alcohol you ingest gets absorbed by the small intestine. But it can only get absorbed so quickly.

Because you’re running after you’ve chugged your beer (and it goes sloshing around in your stomach and intestines), there’s a chance of gastrointestinal distress. This could lead to cramping or the dreaded extra lap vomit.

The liver generally breaks down alcohol into glucose. But during a beer mile, you aren’t giving it a lot of time to do its job!

One beer usually takes about an hour to break down properly in the liver. During a beer mile, you’re knocking back 4 beers in about 10 minutes!

It takes 4 to 5 hours to process this amount of alcohol. The liver has to work overtime to get it done.

So, after four beers, you’re going to be right at the legal limit.

Ingesting any amount of alcohol has an effect on your coordination, your judgement, your speech, and your filter!

When you’re taking in a lot of it in a short time, those effects can be compounded.
Also, keep in mind that the fitter you are, the quicker alcohol tends to affect you.

Think running a mile is easy? Try getting your legs to cooperate when you’re full-up on alcohol!

The presence of alcohol in the brain and body can have detrimental effects on the leg muscles. Firstly, the brain and muscles don’t communicate as well as usual, so your coordination may be off.

Secondly, muscle recovery will be affected. Alcohol-saturated blood carries less oxygen, which means it’s going to take longer for the muscles to receive the oxygen-rich blood they need to recover.

Tips for the Race

Planning on getting a beer mile under your belt? Here are some tips to help you do it easily and safely!

1. Hold Your Breath While Drinking

Try not to breathe in any air while you’re downing your beers. It takes up valuable space in your stomach that could be filled with liquid! 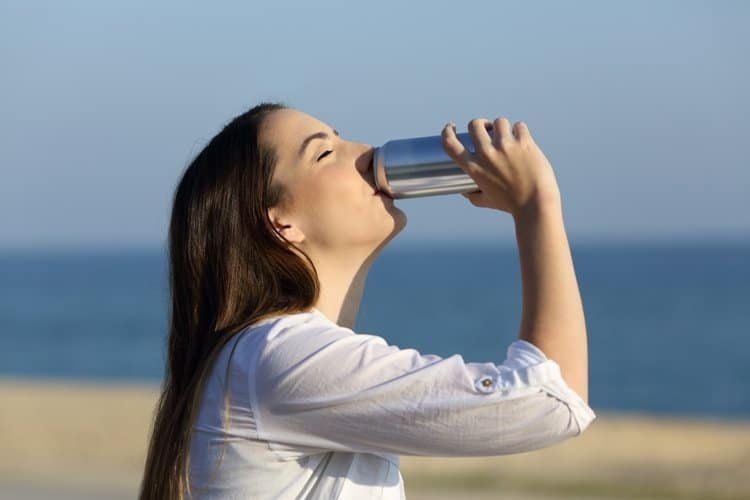 Too much air can also lead to being gassy, which means the chance of you throwing up becomes higher.

2. Let It Flow Straight Down or Take Large Gulps

If you can open your throat and pour down a beer like drinking a shot, this is the best way to do it. If not, take large gulps rather than little sips. This will help you to down your beer quicker and move on to your next lap.

3. Don’t Slow Down to Taste the Beer

It can be tempting to slow down and savor the taste of your beer while you’re drinking it! While enjoyment is part of beer drinking in most cases, not so in this one.

If you slow down to enjoy it, you’re going to end up drinking too slowly and pushing your time back. Pour it down and don’t try to taste it!

4. Suppress the Urge to Gag

On your non-dominant hand, grab your thumb with your other fingers and squeeze it. Surprisingly, for most people this blocks the gag reflex so you can down your beer fast and easily.

While you should be downing your beer quickly, there’s also such a thing as too fast. You should be drinking at a comfortable pace, even though you’re going pretty fast.

The same goes for your running. It’s tempting to push it hard from the start, but rather stick to a comfortable pace that you can maintain.

Going too fast in both of these respects has the potential to cause cramps and stomach issues during the race.

6. Run on a Full Stomach

Don’t attempt a beer mile on an empty stomach! If you’re going to be having a chilled out drinking session with friends, then your empty stomach may be able to handle it.

But when you’re going to be swallowing four full beers in a 10-minute window and still doing exercise on top of that, you need all the help you can get!

Make sure you have a good meal before the race. A healthy meal of whole foods is the best choice; something like oatmeal or a healthy sandwich would be a good option. Try to avoid junk food, as it could make your stomach feel worse!

7. Avoid DIPAs and Other High-Gravity Brews

Be discerning about what exactly you’re drinking. Budweiser is always a good choice, as it’s fairly light and easy to handle, especially when you’re going to be taking in a whole lot of it in a short space of time.

8. Seal Your Lips Around the Can

Sipping can add too many extra seconds to your time. Create a seal with your lips around the opening. This will help you to drink faster without spilling.

9. Drink Your Beer with a 45-degree Backward Tilt of Your Head

If you struggle to open your throat enough to pour your beer down, try tilting your head back at 45-degrees. It’s the most efficient angle for fast drinking!

Yes, yes, we know. Warm beer can be insipid. But remember, you’re not drinking it for enjoyment here. In fact, it might help you to avoid slowing down to savor your beer if you’re drinking it warm. 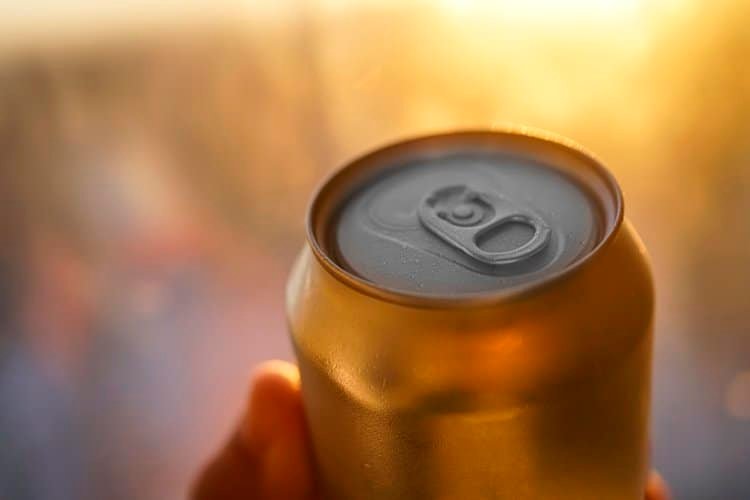 The other advantage is that warm beer tends to lose its carbonation much quicker than cold beer. Fewer bubbles make it easier for you to drink it without needing to burp or feeling overly full.

11. Get a Designated Driver or Take a Taxi Post-Race

You’re going to be taking in a lot of alcohol in a very short time. Even if you’re going to be hanging around afterward to celebrate with your buds, it’s a good idea to have a designated driver or order an Uber to get you home.

Don’t mess around here! Even if you feel great, your judgment is definitely going to be impaired. Be smart and responsible and decide in advance what you’re going to do to get home safely.

Can You Walk the Beer Mile?

You can! There’s no need to speed through it unless you’re specifically aiming for time. You can sprint, jog, or walk the beer mile. Whatever suits you!

Can You Drink Something Other Than Beer?

The official beer mile rules require that you drink beer. If you’re planning on taking part in the World Champs, then definitely beer is the only thing you can drink.

But there are plenty of competitions across the world that allow runners to drink other drinks. Non-alcoholic beer and soda miles are common! Have a look around your area and see what you can find.

If you can’t find something suitable, why not start your own?

Yes, there are beer mile record holders! The men’s world record is held by Corey Bellemore, with a time of 4:33 set at the 2018 Beer Mile World Classic.

The women’s record of 6:08 has been standing since 2015, when Erin O’Mara set it in the Beer Mile World Championship.

Other Types of Beer Mile Variations

There are many variations of the beer mile across the world. Some notable ones include:

We understand that beer drinking is a fun activity and is enjoyed by multitudes of people the world over. But we’d be remiss if we didn’t offer a health warning!

The beer mile is a unique and exciting activity that mixes two fun things together. But consuming that amount of alcohol in such a short period of time can lead to some unpleasant health consequences.

Not only is your coordination and judgment impaired, but your ability to recover is also hampered. If you’re very health-conscious, a beer mile may not be appealing to you.

But if you’re keen to take part, be aware that consuming a large amount of alcohol (even if it is weak) in a short amount of time may lead to you feeling ill and require a few days to get back to full health.

Regular partaking in beer mile events could lead to long-term negative effects on the liver, stomach, and brain.

Be smart about it!

How to Race in the Rain – Tips for Wet Weather Races