Home » Beginners » What Does Chip Timing Mean In A Race?

What Does Chip Timing Mean In A Race?

Running a race can be a big first accomplishment for any new runner. A local 5k might fit the bill, but a “big city race,” one with a field in the thousands, can really show off a city’s running culture and community. These big races are common goals for first-timers.

The excitement of the race is one thing, but the excitement of getting your official results is what many runners are looking for. It might come as a surprise, then, when you receive two different times for your one single race. And these times, your “Gun Time” and your “Chip Time,” can be surprisingly different. What do they mean?

We’ll cover everything that you need to know about chip timing in a race, including what it is, how it works, and some advantages and disadvantages. By the end, you’ll be a pro at knowing the difference. 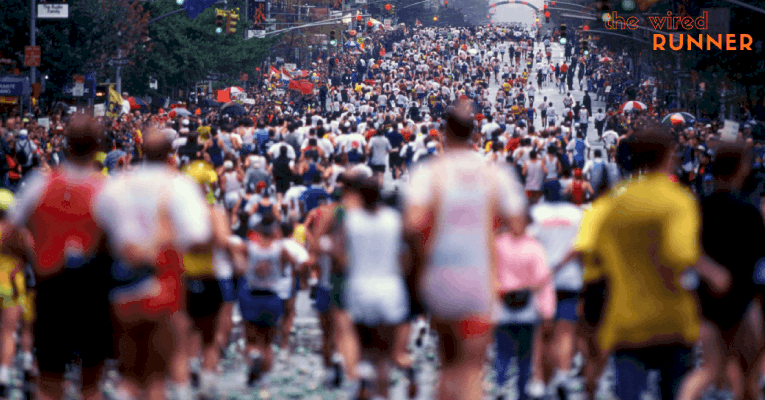 What is Chip Timing?

Let’s start with a definition. Chip time means the time of the race is based on a transponder chip that each individual runner has. It figures out exactly how long it took you to run the race.

If a race field has thousands, or even tens of thousands of runners, there will likely be a staggered start. Some runners start right when the gun goes off. Other runners don’t even line up at the start line until 5, 10, 20 or more minutes later. If you are starting 15 minutes after the gun because of start line logistics, it doesn’t mean that your finishing time is automatically 15 minutes slower. Enter chip timing. Chip timing starts the race clock when you cross the start line, and ends when you cross the finish line. It doesn’t matter if it took you 45 seconds to get to the start line after the race gun went off, or 45 minutes. Your clock starts when you do.

Chip timing is the actual amount of time it takes you to run a race from start line to finish line. It is useful for determining Personal Records (PR) for a particular distance, as well as for age group placings.

How Does Chip Timing Work?

Chip timing requires two elements in order to function: a transponder chip typically worn on the bib (hence, the name) and mats that register your time.

Chip timing is figured out based on a transponder chip that runners wear during the race. Typically, it’s found attached to the back of the bib, and you are told not to remove it. Transponder chips can also be worn on the ankle or tied to shoelaces.

Older versions of transponder chips were collected at the end of the race and reused, but most current versions are disposable and are only used one-time for a race. If you decide to keep your bib nowadays, the transponder chip will still be on the back of the bib.

Mats are then placed throughout the race course, depending on the length of the race, to record runners’ times as they pass the mat. Once a runner crosses the RFID mat, the chip sends out an electromagnetic wave that records the time.

Mats are often placed at the start of the race, which records runners as they cross the starting line. This allows timing to start equally for runners at the back of the start corral who will take several seconds or even minutes longer to cross the start line after the race has officially begun.

Mats can also be placed mid-course for big marathons or half-marathons. When I ran a half marathon, there were two or three mats throughout the course in addition to the mat at the starting line/finish line.

Mid-course mats help your friends and family track you in real time, too. During my half-marathon, real-time text updates went out to my family and friends about my pace and expected finish time. I used the information to compare my split times after the race. I could see if I ran the first half faster than the second, where I struggled with the most, and so forth.

Mid-course race mats are also helpful to race officials because they can identify cheating. Runners who cut the course and try to run a significantly shorter “marathon” miss timing mats. This missing data can show how and where they left the course. 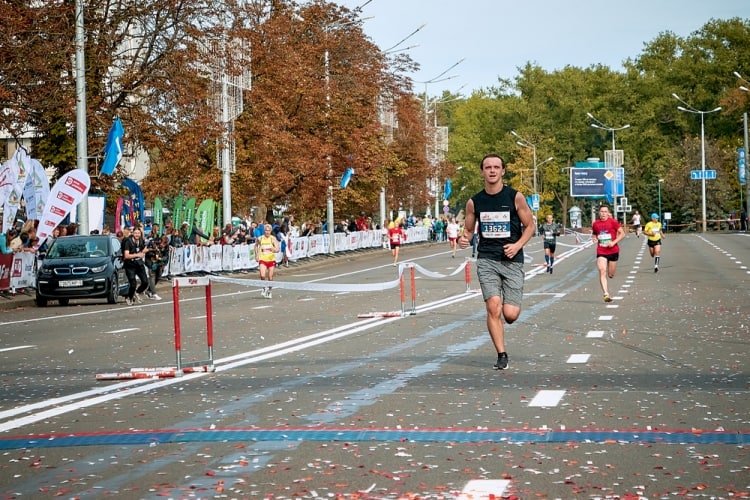 Finally, mats are placed at the finish line, and they record runners’ times as they finish the race. This provides the most accurate race time for each individual. Most runners use chip time when they talk about their race times (unless they are elite). In other words, a new PR is based on your chip time, not gun time.

What’s the Difference Between Chip Time and Gun Time?

If you’re near the start line, your gun and chip time will be very close, if not the very same. However, if you start near the back of the field, your gun time will be longer than your chip time.

Since there can be differences between these two times, there can be occasional controversies. For example, during the 2008 Chicago Marathon, Wesley Korir of Kenya had the fastest chip time. But he lost to a competitor with a faster gun time.

And during the infamous war of attrition that was the 2018 Boston Marathon, no fewer than five women who began in the mass start, long after the elites left the start line, ran fast enough chip times to place them in money-winning spots, including 5th place overall. The Boston Athletic Association opted to award them prize money, even though they were chip times, not gun times.

Right now, for a variety of generally good reasons, gun time is the official method to measure time in an elite race, according to the United States Track and Field Association (USATF). The idea is that it is the fairest way for elites to compete against each other. If you can’t see the other people you are trying to beat, it is harder to race.

What Are Some Advantages of Chip Timing?

Chip timing is the most accurate way to time a race. It gives each individual runner a good idea of how they personally performed. If you start five minutes after the gun goes off but have to rely on gun time, your time is going to be slower than it actually was.

It’s also helpful for race organizers to figure out results and age awards much more quickly as opposed to gun time. Finally, it helps to alleviate timing mistakes and cheating. If you don’t cross a mat with a transponder chip, it’s going to be clear. Relying just on gun time doesn’t give you that certainty.

What Are Some Disadvantages of Chip Timing?

Chip timing can make it hard to tell how you are doing during the race relative to other runners. There will be runners who start and finish behind you but who ran faster (and vice versa).

You may cross the finish line at the same time as someone else, but the final results will show you ahead or behind the other person depending on when you crossed the start line. This is why elite runners use gun time, not chip time in order to gauge competition during the race. 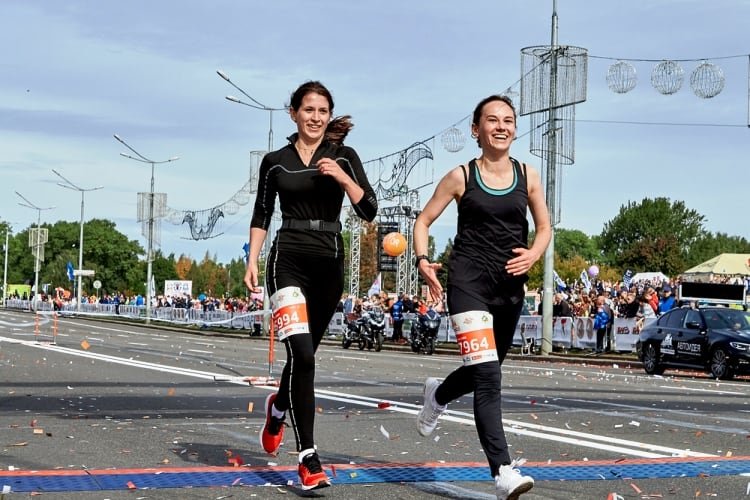 Additionally, timing chips are technology, meaning that they can malfunction. Mats can miss reading your timing chip so there can still be errors.

Typically, the transponder chip on the bottom of a bib or the back of a bib is known as a B-Tag. First, don’t remove this part of the bib thinking that it’s unnecessary because it doesn’t have your number on it.

Additionally, make sure that your bib isn’t folded or wrinkled, pin it in all four corners so that it’s flat, and make sure that all race officials can see your bib. It should be on the front of your shirt and shouldn’t be covered by clothing or runner belts.

As increasingly more people become interested in running and racing, it’s helpful to have chip time to get an accurate result for people who don’t start near the start line. Knowing how you personally ran a race is what every runner wants to know.

It’s also now impossible to fudge your race time because the chip time is extremely accurate as long as all of the technology works. This helps race officials keep runners honest and oversee the most fair race possible.

Chip timing is here to stay, but whether or not it even replaces gun time remains to be seen. As of right now, many larger races have both chip and gun time. This gives you the best of both worlds. You see how you did in comparison to the other runners. You also see how far behind of the lead pack at the starting line you were.

How to Race in the Rain – Tips for Wet Weather Races