Wetsuits are designed to be used for open water swimming. They serve two purposes: to keep swimmers warm in cold water and provide some buoyancy when swimming in an uncontrolled environment.

You can invest in a wetsuit for training purposes if you swim a lot in open water. But they’re most often used by triathletes, as it’s compulsory in many cases to wear one for the swimming leg of your triathlon.

USA Traithlon has put together triathlon wetsuit temperature guidelines and rules to follow. It’s important to learn and understand these if you are a triathlete or if you’re planning on starting.

The rules have practical reasons behind them and should be followed in every event. If not followed, swimmers are at risk of being ineligible for awards. 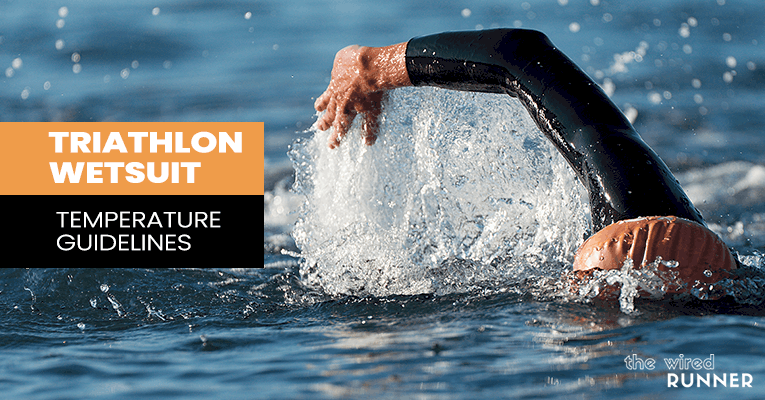 What Wetsuits Are Available for Different Temperatures?

Sleeveless wetsuits can have short sleeves and long legs or they can have both short arms and legs.

These wetsuits are ideal for warmer water temperatures. But they do let in more water, which can cause drag if you’re swimming for time.

Often, sleeveless wetsuits are less expensive than full wetsuits. This is mainly due to the difference in the amount of material used to make the wetsuit.

Full-sleeved wetsuits are a better option for colder water temperatures. They are also the better choice if you are aiming for speed as they produce less drag than sleeveless wetsuits.

Full wetsuits are more expensive than sleeveless wetsuits but they are durable and designed to withstand the elements.

USAT strictly enforces these rules in order to keep swimmers as safe as possible. It is important to note that the temperature refers to the water temperature and not the weather.

If the water temperature on the day of your event is below 60.8 degrees Fahrenheit, the USA Triathlon Association (USAT) has stated that it is compulsory to wear a wetsuit.

You can choose if you prefer a sleeved or a sleeveless wetsuit, but the wetsuit needs to cover the back and torso fully.

Some events may work on 58 degrees Fahrenheit as their measurement instead of 60.8. It’s always advisable to check the rules of your particular event.

Waters that are between 60 and 65 degrees Fahrenheit can be braved without a wetsuit.

But USAT highly advises wearing one in order to stay as warm as possible while in the water and prevent dangerous incidents related to cold exposure.

Water with a temperature of between 65 and 78 degrees Fahrenheit is suitable for swimming without a wetsuit if you so desire.

Fully-sleeved wetsuits are less popular at this temperature. You may see many swimmers opting for sleeveless wetsuits—arms or both arms and legs.

At this temperature, participants are allowed to wear wetsuits if they want to but they may not be eligible for awards. Because the water is considered warm, a wetsuit may be seen as a performance-enhancing trick instead of a safety measure.

That doesn’t mean that participants are not allowed to wear wetsuits. They are not banned or disallowed, but in official terms, are “not sanctioned”.

In most cases, it comes down to the race director’s judgment as to whether or not wearing a wetsuit disqualifies one from receiving awards.

Even if one isn’t allowed to receive awards, some triathletes will choose to wear a wetsuit at this temperature in order to reach a specific time goal.

If the water temperature exceeds 84 degrees Fahrenheit, triathletes are not allowed to wear wetsuits—sleeved or sleeveless.

At this heat, a wetsuit can trap heat between the suit and the skin, leading to overheating, excessive dehydration, and heatstroke.

What Thickness Wetsuit is Allowed in a Triathlon?

There is no minimum thickness for a triathlon wetsuit. But it is not allowed to exceed 5mm anywhere on the wetsuit. 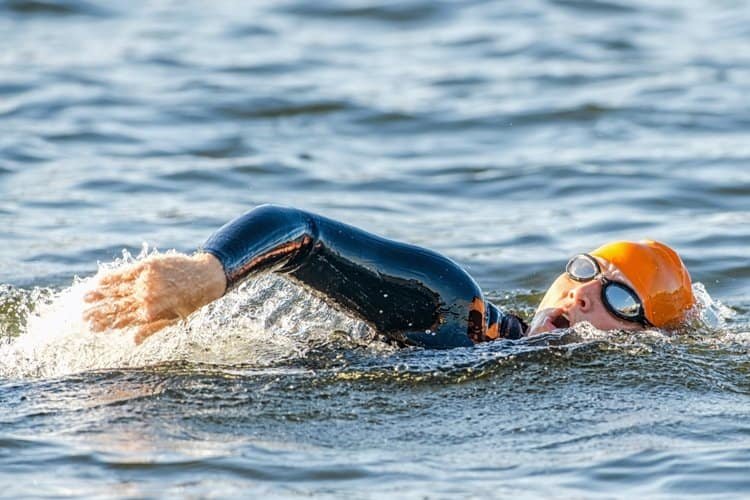 Some wetsuits are made from two pieces that are sewn together. In order for the wetsuit to be legal to race in, the overlapping pieces need to be less than 5mm in thickness.

This is to prevent triathletes from gaining extra benefits in terms of buoyancy.

What Else Should Athletes Know About Wearing Wetsuits in a Triathlon?

Disabled Athletes May Wear Wetsuits for All Swim Events

Although there are restrictions for able-bodied athletes depending on the water temperature, physically challenged (PC) athletes and those using a and handcycle (HC) are allowed to wear wetsuits at any water temperature.

Make Sure Your Wetsuit Fits Properly

Although an ill-fitting wetsuit is not illegal during triathlons, making sure yours fits right is important as it will help to provide effective buoyancy and keep you warm.

A wetsuit that is too big will allow water to seep in and weigh you down. One that is too small will be difficult to get on quickly during your transition.

Water Temperature Is Measured on the Morning of the Event

The water temperature will be measured on the morning of the triathlon event. It may be measured more than once if weather conditions change abruptly.

This way, you can pack the appropriate wetsuit—if you own more than one—and you can know beforehand if you will be allowed to wear your wetsuit or not.

No part of your wetsuit may cover your face, hands, or feet. This is seen as giving one an unfair advantage, especially if the water is at a cold temperature.

Some triathletes may be tempted to wear neoprene booties. These can be useful for training, but they are only allowed if you’re swimming in water of 65 degrees Fahrenheit or lower. Any sort of head, face, or hand covering is completely prohibited.

Timing Chips Must Not Be Obstructed

You will need to make sure that your wetsuit is not obstructed the signal of your timing chip.

Timing chips are also not allowed to be placed on top of a wetsuit, as they may be accidentally removed when stripping the wetsuit off after the swimming leg.

You will need to put some thought into how to display your race number while you are swimming. If you’re using tattoos, they will most likely be covered by a wetsuit so you will need to find an alternative for your swim leg.

Although covering your race number is not against USAT’s rules, it should always be visible for safety and identification purposes.

A good option is to mark your swimming cap with your race number. That way it will remain visible throughout the length of your swim and you can go back to using your race tattoos or other forms of race numbers after your swimming leg is finished.

How Long Do Wetsuits Last?