If you’re getting into triathlons after either being a runner or a cyclist, it’s possible that you’re wondering about triathlon vs road bikes. What’s the difference, and is it really that important?

The differences between a road bike and a triathlon are subtle. But they can make a significant difference to your performance when actually riding them.

In this article, we’ll describe what each one is, go through the traits and benefits of each, and help you decide if a road bike or triathlon bike is the right choice for you. 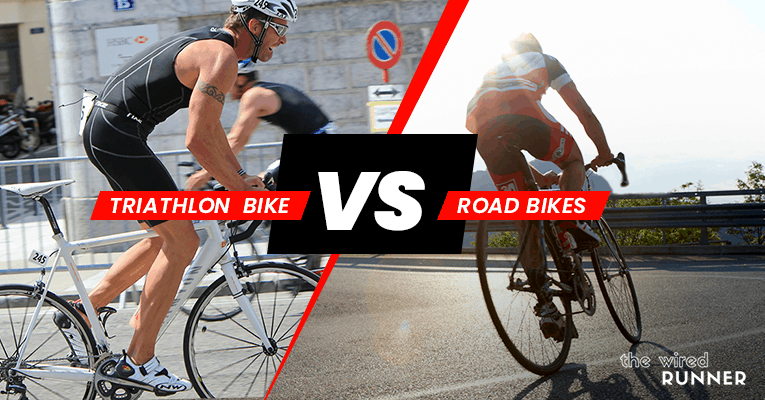 What is a Triathlon Bike?

Triathlon bikes are designed for aerodynamics.

They have a slightly lower handlebar to allow the rider to get into a real aerodynamic position. It’s designed to bring your arms close to and tucked in line with your torso, to prevent any drag.

The seat on a triathlon bike is also angled slightly differently, also with the intention of bringing the rider into a more flat position.

What is a Road Bike?

Road bikes are not designed to be streamlined.

They feature a flatter seat and higher handlebars, and they’re typically easier to maneuver than a tri bike. They’re also easier to adjust than tri bikes.

Key Traits of a Tri Bike

Triathlon bikes have built-in aerobars, which can be removed or replaced with others. These are straight or curved bars that attach to your handlebars right in the middle and jut out in front of you.

These serve as handlebars as well as a place to rest your elbows when you’re in the aero position, so there’s less strain on your wrists.

Generally, you can take the aerobars off and replace them with others that are more comfortable to you, although this can be quite a mission and isn’t just an easy thing to do.

The frame of a tri bike is more aggressive, which basically refers to the angle of the seat tube.

The two above features serve to make the experience of riding the bike more aerodynamic.

Other things that add to the streamlined nature of the triathlon bike are a slightly longer top tube to allow for a comfortable ride in the aero position and more weight over the front axle which makes handling more precise.

Aerodynamically-shaped tubes and wheels also contribute to a more streamlined contour of a triathlon bike.

Triathlon bikes are usually more expensive than road bikes. This is mostly because they include specialized tubes and wheels for aerodynamics and aerobars.

The seat on a triathlon bike is angled at around 72 degrees, as opposed to the ±78 degrees of a road bike. This helps the hips to sit in a more forward position while the rider is on the bike, reducing strain on the upper legs.

It’s also much easier for the rider to lean forward in the aero position when the hips are positioned this way. So not only does it keep your upper legs muscles feeling better, but it actually helps you to be more aerodynamic.

Typically a triathlon bike has more storage space than a road bike. This is because, depending on the length of your triathlon, you could be in the saddle for a bit longer than you would on the average road bike.

Aerodynamics are important on a triathlon bike. Drafting is not usually allowed in a triathlon (riding behind another racer to minimize wind resistance), so the bike itself needs to be more streamlined than a regular bike. 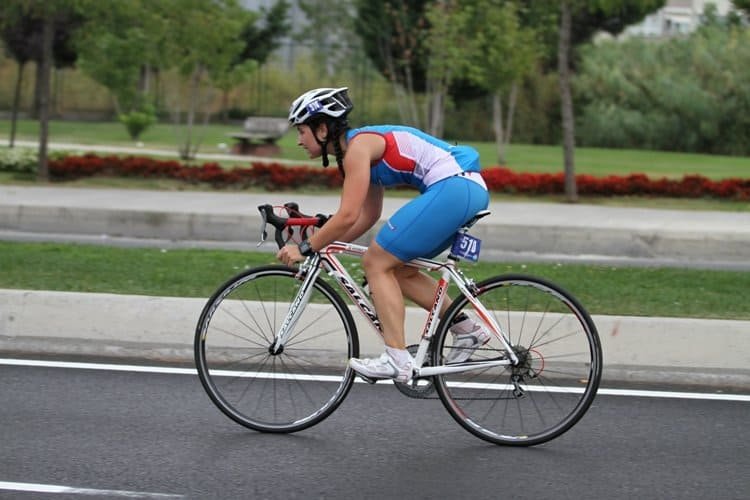 Your aerobars, aerodynamically-designed tubes, deep carbon-fiber wheels, and strategic seat position are all created and put together specifically for this function.

They’re also created in such a way that the rider remains comfortable for long stretches on the bike.

Road bikes are an excellent choice if aerodynamics are not your top priority. Thanks to their more boxy frame design, they’re easier to maneuver on a course than tri bikes are, especially for newbies.

The frames are usually slim and use more rounded tubes than tri bikes. They’re equipped with tires that are geared towards road riding.

The handlebars are straight and don’t come with the option of aerobars, although you can buy aerobars separately and install them on your road bike if you want the option of using them.

They’re a good option for beginners who aren’t invested enough in the sport to buy a full-on triathlon bike.

Key Traits of a Road Bike

Road bikes are much more versatile than tri bikes. You can use them for training, leisure rides, road races, or triathlons.

Thanks to their easy handling, they’re a much better option for a variety of different rides.

Although tri bikes are made to be aerodynamic, road bikes are generally lightweight and easy to ride with.

This also contributes to the ease of handling these types of bikes as opposed to tri bikes.

If you want to, you can even have a different seat post fitted to allow for a more tri-feel, which helps immensely if you’ve got aerobars fitted. You can also fit clipless pedals if you want to generate more power on the bike, or a variety of different wheelsets.

The better bike for you depends on your specific needs. If you’re new to triathlons or do more road cycling with just a few triathlons here and there, a road bike is probably the better choice.

Not only is it easy to customize (although it may be costly), but it’s also easier to handle than a triathlon bike. Tri bikes can take a lot of getting used to for beginners.

However, if you’re very interested in triathlons and plan on doing them often, especially if you’re aiming to do a big one like a Half Ironman or an Ironman, then choosing a dedicated triathlon bike could be the better choice.

Riding a road bike in a triathlon is actually far more common than you might think. Tri bikes are excellent for pros and those who are experienced enough to handle the precision that’s necessary for a tri bike.

If you’re wondering if using a road bike will impact your performance, it’s not likely to make a big enough difference unless you’re participating in a professional competition like the Ironman.

Triathletes can, and do, perform excellently using road bikes. If you want better aerodynamics, then a tri bike is worth it.

But for newbies and those who aren’t specifically cyclists, a road bike is a perfectly fine option to use in a triathlon.