Maybe you’re like me, and you’ve always been someone who has run on roads. If you’re thinking about switching from running on roads to running on trails, this article is for you! We’ll cover the benefits of trail running as well as some things to keep in mind if you switch.

I personally still have kept up the road running, but I love adding in trail runs every so often to change things up. No matter what you end up deciding, you can’t go wrong with a trail run every now and then! 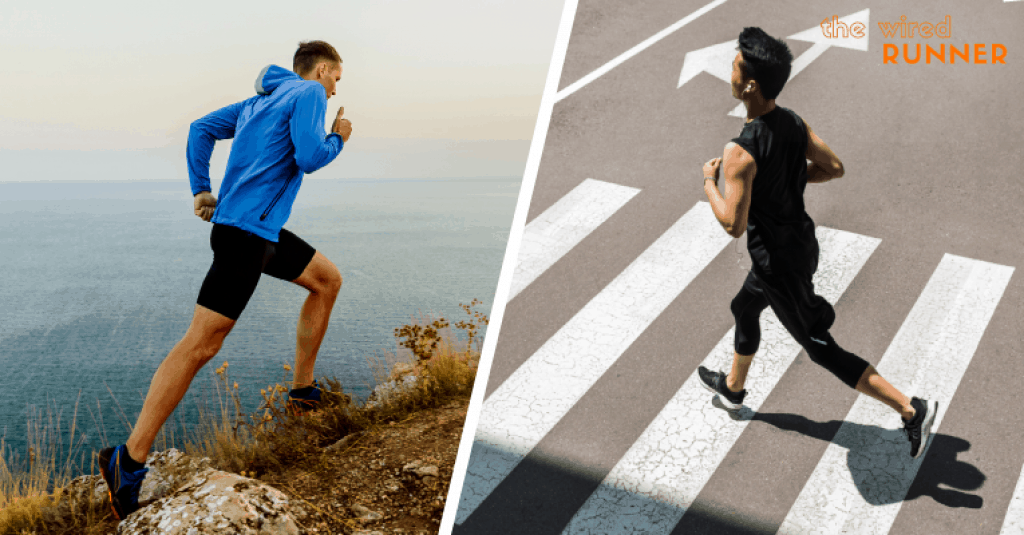 Before starting anything new, you probably want to know what the advantages are. It turns out that there are a lot of advantages to trail running. It’s a great change of pace and can offer you some safety that road running just can’t.

Depending on where you live, road running might be pretty boring. When I used to visit my parents at their old house, if I wanted to run anywhere within a couple mile radius, it was all boring subdivisions and strip malls. Not exactly the most visually interesting place to plan out a route.

But running on trails will definitely give you a much better environment. You’ll be in nature (or at least something like it), so it will be quieter and more serene. You’ll have lots to look at, so it will be more interesting.

And you’ll get to experience the seasons changing if you run more or less year-round. My parents’ subdivision was the same year-round, except the temperature outside. Fall and spring are especially great times for running on trails because there are so many different colors.

Plus, you’ll give yourself a more challenging run. You need to be constantly aware of your surroundings so that you don’t trip and fall on something, and there will be greater variation in elevation. It will be an excellent physical and mental workout. Probably one of the biggest downsides to road running are the cars. If you’re fortunate enough to live near paved paths as I have several times in my life, this makes road running a lot safer. But if not, you’re going to have to deal with cars.

Obviously, you aren’t going to encounter any cars on the trail or any motorized vehicles, so it will be a lot safer for you. Additionally, we all know how hard pounding the pavement can be on our legs and knees.

You’ll likely experience fewer injuries running on trails, although you might get more cuts and scrapes depending on what sort of terrain and foliage you have to run by/around. But you’ll definitely have fewer overuse injuries like runner’s knee, which is great if you’re prone to injuries or older.

With road running, you have a road. Depending on where you live, it might be flat, or it might be hilly. But you’re mostly going to encounter asphalt and concrete.

With trail runs, you’ll encounter a much greater variety of surfaces: dirt, mud, rocks, roots, single-track, and double-track. Plus, hills can be bigger, longer, and steeper (Wait! Come back! That’s a good thing!). I speak from experience: my 12-mile trail run from training for my first half marathon about killed me. In a good way, of course. There were so many hills!

Additionally, while the environment is very peaceful and relaxing, you have to stay more alert when running on the trail. It is mentally demanding. You cannot zone out because you need to watch the ground. You’re not going to trip on something like a big boulder or fallen tree. You’re going to trip on something the size of your thumb. But hey! At least you’re getting a physical and mental workout at the same time!

Because of its technical nature, trail running slows you down, no matter what your pace. Change your expectations going in. You might run an 8:00 easy pace on the road, and struggle to maintain 10:00 on the trail, even with hard effort.

It’s easy to run a fast mile on the track or a flat piece of road, but speed-friendly trails are harder to come by. You need to mentally adjust your paces. In fact, most trail runners opt to walk or power hike up hills. To road runners who are used to hills with a 6% grade, this sounds like taking it easy. The first time you hit a 25% grade on a trail covered with golf-ball sized gravel, you understand.

If you’re used to running up the few slight hills that you might encounter in your road run, you might think about walking up hills on trail runs too because I guarantee there will be a lot more—and a lot longer and steeper ones that aren’t graded like ones on your road routes!

While it’s true that you won’t have to deal with cars, you will need to stay alert and aware of your surroundings to stay safe on the trail. You will encounter a lot fewer people when you’re running on the trail, something that is especially important to keep in mind if you’re a female.

You might want to consider running with a friend, and you definitely don’t want to do trail runs at night. In fact, most parks won’t let anyone in after dusk. Make sure that you know your route and bring a map because it is much easier to get lost and much harder to get reliable GPS reception.

Fortunately, many parks have maps along the trails, so you’ll be able to check as you go along if needed. Finally, bring your cell phone. This isn’t something you’ve likely been accustomed to as a road runner, but you need to have a way to call someone if you get hurt or in trouble.

If you’re running on the road, in a pinch, you can get to a nearby gas station or store or ask a stranger, but when you see a lot fewer people on the trail, your options are much more limited. Don’t risk it. Bring your phone and make sure it has service. 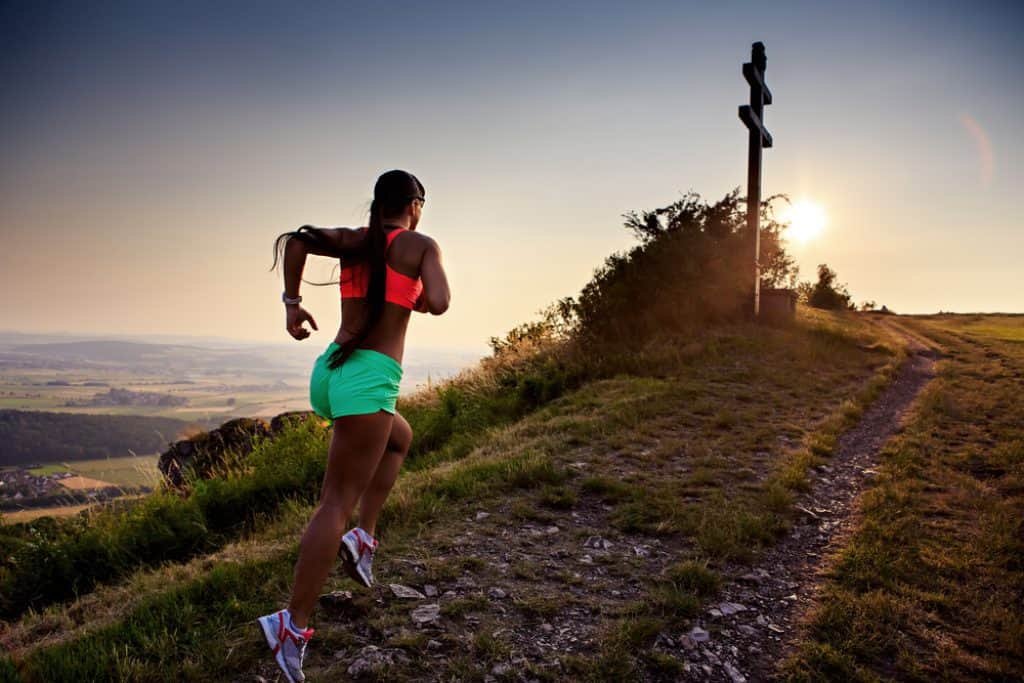 While the attire you wear trail running will be similar, you might want to consider getting different shoes and/or gaiters. You can use road shoes, but trail shoes (since they are designed for trails) have better traction, protection, stability, and durability. Something as simple as scraping the side of your upper along a rock can ruin a road shoe that is not designed with rugged wear in mind.

If you’re running when it might be wet, gaiters are great ways to keep water from getting inside your shoes and soaking your feet. Gaiters are also good for keeping sticks, rocks, sand, and anything else you may encounter on the trail outside of your shoe.

Trail shoes are especially good for dealing with moisture. Unless it’s raining outside, you’re likely never going to have to deal with water getting into your shoe running on the road, but it’s a much greater chance on the trail. Do your feet a favor and keep them dry.

If you’re a big race junkie, you might be worried about giving up races if you pick up trail running. You would be wrong. There are plenty of trail races. It’s just that you’re going to have to be willing to run longer!

Many trail races tend to be longer than the standard road fare. Half marathons are the usual minimum distance. Maximum distance? Hard to say. 100-milers are not uncommon, and there are longer races as well, sometimes over multiple days. Anything longer than a marathon is called an “ultra.” Trail 5ks exist but are few and far between. You’ll also have to be prepared that the aid stations will be farther apart than for road races. But they’re also more fun…get ready for things like toasted cheese sandwiches, bean burritos, and maybe the occasional Fireball in addition to fruit and water.

Unlike a road race where there can be an aid station every 1-3 miles depending on the length of the race, typically trail races have aid stations that are 5 miles apart.

But trail races do have a benefit that road races don’t: there is typically more comaradery in trail races. That means that you’ll get lots of encouragement as you run longer distances!

In the end, if you’re looking to mix things up, if you want to run in more aesthetically pleasing scenery, or if you’re trying to be easier on your joints, switching from road to trail is a great idea.

By making sure that you have the proper gear, are prepared for safety concerns, are aware of terrain and pace differences from road running, and get ready for trail races, you’ll be set to become a trail runner!

What To Do if You Get Caught Running in Lightning?