Do you know what kind of foot strike you have? Surprisingly, many runners have no idea! But you can only have one of three—forefoot, midfoot, or a heel strike.

Most runners are heel strikers. For many of us, that’s the natural way we run and it doesn’t cause any problems.

In many cases, there’s no need to even consider how to stop heel striking when you run. If you aren’t hurting yourself, your body is probably running the most natural way it knows.

However, if you are getting injured often or your form is poor, you may want to consider changing a few elements of your form. One of these is changing your foot strike. 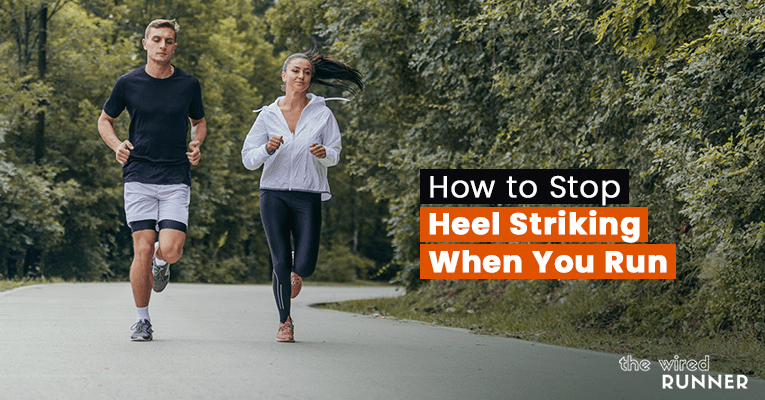 What Is Heel Striking?

Heel striking, which is also known as rearfoot striking, is when your heel makes contact with the ground first, and then the rest of your foot follows.

You’ll notice that your foot is pointed upwards—flexed in ankle dorsiflexion—towards your shins when the heel lands and that your heel is landing first in front of your hips.

How Do Most Runners Land When They Run?

Heel striking is the most common type of foot strike amongst runners. It’s so common that research has shown that most mid-distance to long-distance runners are heel strikers.

There’s also evidence that suggests that heel striking is more energy-efficient at slow to medium speeds.

This could be one of the reasons why mid-distance to long-distance runners may prefer a heel strike over a forefoot strike. As the distance increases, the forefoot or midfoot strike would become less efficient.

With that being said, most distance and recreational runners don’t consciously choose to become a heel striker; rather, it’s something that occurs naturally.

You may also inadvertently become a heel striker if you spend most of your day seated. This can cause you to develop chronically tight hips and weak glutes. When you run, your stride then reaches much further out in front of you than it needs to.

With the heated debate over foot strike styles, it’s important to note that there’s nothing inherently wrong with heel striking.

What Are the Other Foot Landings?

When you run your foot will come into contact ground in one of the three defined foot strike patterns:

With this type of foot strike, the front of your foot—or ball of foot—would come into contact with the ground first.

You may also notice that your body is bent slightly forward at the hips when you run, similar to the posture of a sprinter.

Sprinters run with a forefoot strike, as their feet will spend less time in contact with the ground, and they achieve a more powerful sprint because of the forward force production.

While forefoot running may be great for when you need to pick up speed or run up a hill, running long distances in this footstrike style could lead to tightness and cramps in the Achilles and calves.

The midfoot strike, which is also known as the neutral foot strike, is when your forefoot and heel come into contact with the ground at the same time.

Since this happens simultaneously, you’ll find that your weight is balanced, impact is distributed evenly on top of your hips, knees, and ankles, and it can help runners remain injury-free.

When Is It Ok to Heel Strike?

It’s really only necessary to consider changing your foot strike if you have weak calves, ankles, and feet and you’re suffering from injuries in these areas often.

If you’re new to running and wondering what foot strike is best, you should go with whatever feels the most natural. If it’s heel striking, then that’s probably the right thing for your body. 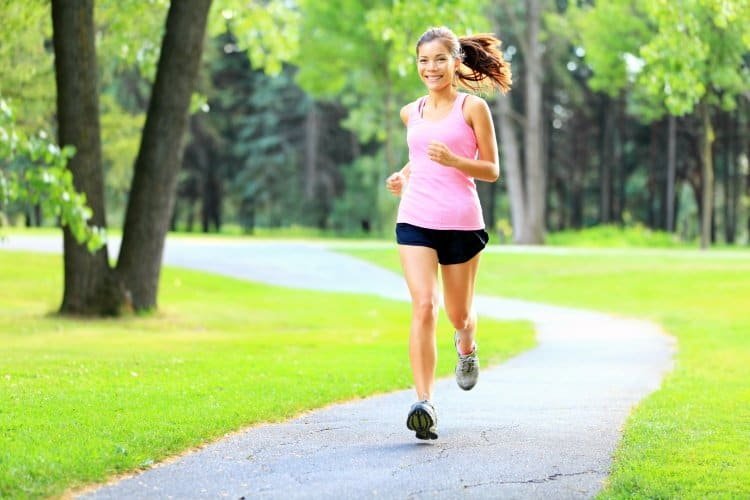 Those who run anything longer than sprint distances can perform exceptionally well with a heel strike. Sprinters shouldn’t be heel striking, but with any other runner, it’s okay.

The only time you may want to run on your forefoot instead is when you’re pushing uphill. In this case, striking with your heel can make you feel off-balance, while a forefoot strike can push you forward with momentum and pick up speed.

What Problems Can Arise With Heel Striking?

Runners who heel strike may find that problems tend to arise when their heel lands out in front of their body and the knee is fully extended.

This puts an increased load and excessive amount of pressure on the hip, knee, and surrounding soft tissue.

The repetitive jarring on the joints can increase your risk of developing one of the following injuries.

Heel strikers are more likely to develop an Achilles injury due to the instability of the heel during the foot rollover process.

During this process, there’s an increase in overpronation, as your body weight is transferred across the foot. This places your Achilles tendon under excessive strain, which can lead to an injury.

Research has shown that the IT band is placed under excessive strain during the early phase of the heel strike, when the body “brakes”.

There’s also more motion through the hips and knees, putting stress on the IT band. This puts heel strikers at a higher risk of developing IT band issues.

With every heel strike, your stride is slowed down, which sends a considerable amount of impact to your knees.

Your foot can also land ahead of your center of gravity with your knee extended straight in front of you, which reduces your ability to absorb the shock.

Over time, the jarring impact to your knees can either lead to joint pain or inflammation on the surrounding soft tissue.

As a consequence of a heel strike running style, hip pain and injuries are common.

This can be caused by the excessive braking forces that are being absorbed by the hip joint, or because the hips are required to provide increased stability for the lower legs.

Why Would You Want to Change to Mid or Front Foot Running?

The best reason to change your foot strike from a heel strike to a midfoot or forefoot strike would be if you experience heel-strike-related injuries often, like the ones mentioned above, which can lead back to your gait.

This could indicate that your foot strike is not optimal for your body and a different strike may be more beneficial.

In most cases, changing your foot strike to improve performance is not a valid or a viable reason for changing—unless you are switching from being a mid- or long-distance runner to a sprinter.

If you run any distances that are longer than a sprint, switching to a midfoot or forefoot strike is not energy efficient, and may lead to you losing energy halfway through your race.

You may also develop other injuries if you are running with a different foot strike, as different parts of your leg and foot will be placed under more strain.

In most cases, if you wish to improve your performance, you should focus on fixing small problems with your form—like your landing foot placement—and your foot strike will correct itself if necessary.

What Are Strategies to Change Foot Landing?

If you do feel the need to take action to change your foot strike—and you have the backing of a coach or foot specialist—here are some strategies you may consider to help you make the change.

Working on repetitive movements while incorporating your desired foot strike will help to ingrain your foot strike into your muscle memory. 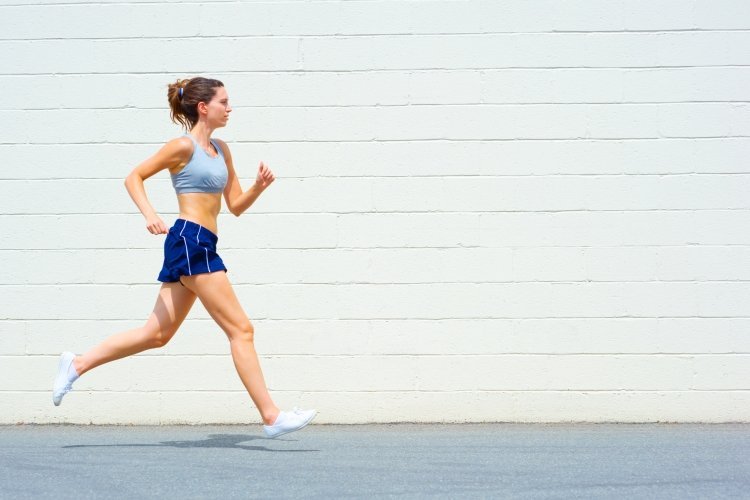 Try doing quick, dynamic movements like high knees, side shuffles, or even running backwards while concentrating on using the foot strike you want. This will help to get your muscles used to the feeling.

Focus On Your Running Posture

In most cases, improving your running form means your foot strike will default to its natural style, which is what you want.

Make sure your foot is landing underneath your hips when you land, and your entire body—from ankle to shoulder—is in a straight line.

You shouldn’t be leaning at the waist or overextending your legs so your feet land in front of you.

Pay attention to proper arm swing and try not to cross your arms across the body. You can also fix overstriding by consciously shortening your stride, which may actually increase your cadence.

Don’t forget that your core and glutes should be engaged while you’re running, in order to stabilize your body.

Running shoes with a high heel-to-toe drop encourage heel striking, as the heavier heel naturally lands first due to gravity.

However, if you want to change your stride, it may be a good idea to switch to a lower heel drop or a zero-drop shoe. This will eliminate the heavy heel and allow your feet to land as they should naturally.

If your shoes have a narrow toe box, you may unconsciously be heel striking to avoid jarring the boxed-in toes.

However, wearing shoes with a more spacious toe box will give the toes room to splay and grip naturally, allowing your forefoot to be more free and comfortable if you choose to try forefoot striking.

The theory is that the less cushioning and stability features there are in a shoe, the more your foot will go through a natural foot strike.

If you want to, you can choose a minimalist shoe and get used to how your foot feels with its natural strike.

With that being said, you should alternate between your old shoes and your new shoes if you wish to do this. Don’t just switch shoes completely, as this can lead to injury when your foot is placed in a different position for a prolonged period of time.

Another option is to run barefoot. You may not be able to do this in urban areas, but if you can find a safe grass, sand, or soft dirt area, you can start incorporating short barefoot runs into your training.

Not only will it encourage a natural foot strike, but it will also strengthen the muscles in your feet.

Practicing sprinting will help you to get a better feel for a forefoot strike. You can add this into your running drills.

Warm up properly and then do a few sets of sprints. Make sure to hit the ground with the right part of the foot and lean forward as you run.

You can increase the time by about 5 to 10 percent every week, until your body is used to it and it becomes a natural way for you to run.

Once you become acclimated, it will become a habit and you’ll start to run this way every time.