Should You Go Running Shirtless?

Do you live in a hot place? When you’re running during the heat of summer, sometimes a shirt can feel like a torture device.

Although most running apparel these days uses technology to encourage airflow through the material and wick away sweat, it can still get soaked with sweat and stick to your skin. This might make you wonder if a shirt is even necessary…

But should you go running shirtless? It could be a great idea in some places but in others, it may be considered inappropriate.

Let’s have a look at the pros and cons of running shirtless (or in a sports bra) so you can decide if it’s the right thing for you. 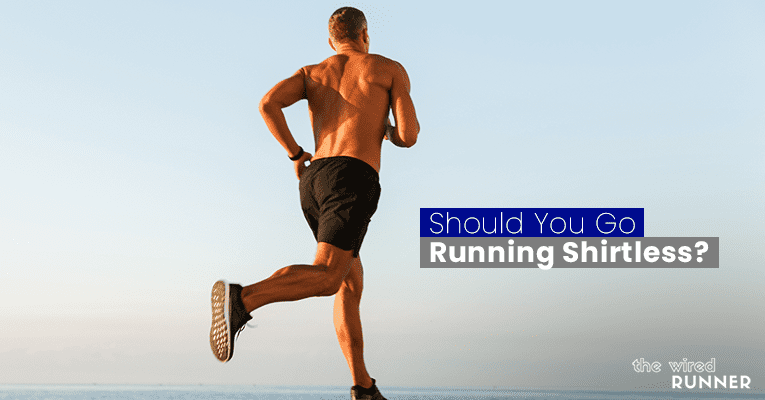 Perhaps the most tangible advantage to running shirtless is that it can be very motivating.

If you feel like you look good enough to run without a shirt on, then not only will your exercise feel better, but you’ll also always be more motivated to keep yourself in good shape.

However, if you start to get lazy with your exercise, you may find yourself wanting to put your shirt back on when you go for a run. So running shirtless can be an easy way to keep making positive progress with your workouts and your nutrition.

This is one of the most practical reasons for running without a shirt on. If you live in a hot or humid environment, running with a shirt on can sometimes contribute to overheating while running.

Most running shirts are designed with cooling technology, which helps to wick away sweat and bring air in to circulate and cool down your skin. But if you’re doing an intense run or a long run, sometimes you sweat too much for the technology to work effectively.

In these cases, your shirt can become drenched with sweat. When this happens, the shirt becomes clingy and can increase the chance of chafing. It also becomes heavier and uncomfortable.

Also, when the shirt is too saturated with sweat, the cooling effect is negated and you can actually become hotter instead.

Running without a shirt means that you don’t have to worry about your apparel becoming saturated, heavy, clingy, and uncomfortable. Air will be directly against your skin, cooling you down easily.

If you don’t have time to spend outdoors other than during your run, running without a shirt on allows you to catch a tan at the same time as you’re getting your exercise.

If you want to get tan while you’re running, you can run without a shirt or just with a sports bra.

However, runners should pay careful attention to how long they spend in the sun. Make sure you’re wearing a strong sunscreen, like the Banana Boat Sport Performance Cool Zone.

Runners who will be running for a long distance may need to take some sunscreen with you so you can reapply it every 30 minutes or so, especially as you sweat.

Chafing—especially nipple chafing—is a common and painful problem for runners, especially men. As you run, the material of your shirt rubs lightly against the nipples, which can cause rawness, redness, swelling, and burning pain.

Running without a shirt removes this problem. While runners can always use an anti-chafing lotion to ease this condition, removing the shirt takes away the friction between the skin and the material that leads to chafing.

Running shirtless may slightly reduce the drag runners experience when wearing a shirt. Those who run for pace may find that they run slightly faster when they’re running without a shirt on. 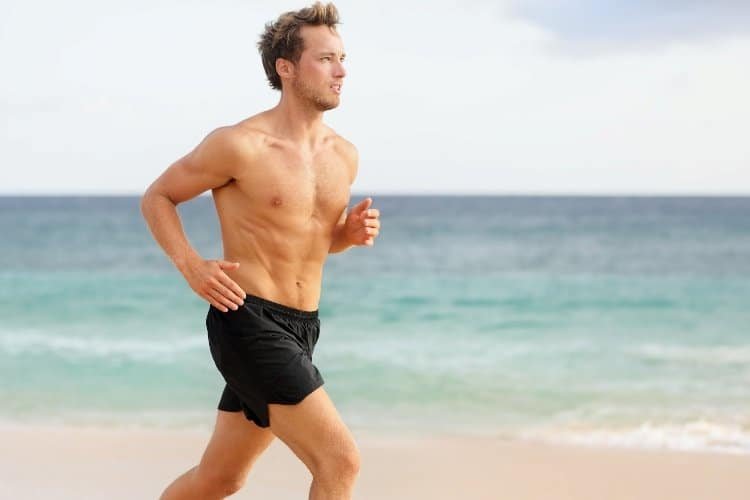 There may also be a mental aspect to this feeling. Runners who feel fit, healthy, and confident may naturally run with more power, increasing their pace.

Runners who are environmentally conscious will be happy that running shirtless also means doing less laundry. While this is convenient, it also helps to reduce the amount of water you use in the long term.

While one less shirt doesn’t make a difference in one load of laundry, over time this can add up to eventually save you an entire load of laundry. This is especially true if you run very often.

Many races—if not all races—require that runners wear a shirt. This is partly for protection against the sun and also partly so that runners have somewhere to pin their race numbers that officials can see easily.

If you like to run shirtless, you may not be able to do so when running competitive races. You should check the race guidelines before entering the race so you know what’s appropriate for that specific race.

No Place To Wipe Sweat

If you choose to run shirtless, you may find that you seem to sweat a lot more than usual. This is because you have no shirt to catch the sweat, so it will be running down your body and you’ll feel it more.

Runners who are in the habit of wiping their brow with their shirt may find that it takes some time to get used to not having a shirt on. But this can be fixed by using a wristband or wearing a headband.

But if runners get used to running without a shirt on in the summer months, it may be a little more difficult to get used to wearing a shirt again in the winter months.

Going shirtless is not appropriate in some situations. If you’re running on the beach, on a trail, or a dedicated fitness area like a running track or a CrossFit box, then it should be okay to run shirtless.

However, if you’re running in a public place like on the sidewalk in town, a public park, at a public gym, or other places where rules or etiquette don’t allow for bare skin to be shown, running shirtless is not an option.

Runners should be mindful of the other people that will be around the area. If you’re in a place that’s dedicated to fitness, such as a gym, then it’s likely that people will accept you being shirtless.

But runners in public should be considerate of others in the near vicinity. Families in a public park, for example, may feel uncomfortable if you’re running shirtless.

For both men and women, running shirtless or with just a sports bra on can bring about unwanted attention from others.

If you’re running without a shirt on to motivate yourself to keep up with exercise and nutrition so you always feel comfortable running shirtless, you may not appreciate the attention from others.

Runners who are shy or introverted may find that running shirtless is more of an uncomfortable experience for them due to this.

Lined vs Unlined Shorts – Pros and Cons of Each

What Is Dri-Fit – Is It Good For Running?