Home » Training » Running Form » Should You Change Your Foot Strike?

Do you know if you’re a heel striker, a midfoot striker, or a forefoot striker? You may not know if you’ve never taken the time to think about it, or never seen yourself run on video!

The majority of runners are heel strikers. An impressive 70% of runners hit the ground heel-first. Does that make it better than other foot strikes? Not necessarily. But it also doesn’t deserve the bad reputation it gets either!

If you’ve ever looked into improving your running form, you’ve probably wondered if your foot strike is a problem. Should you change your foot strike to reduce the chance of injury or improve your performance?

Let’s explore the mechanics of your foot strike and see if changing it is possible and/or worthwhile to consider. 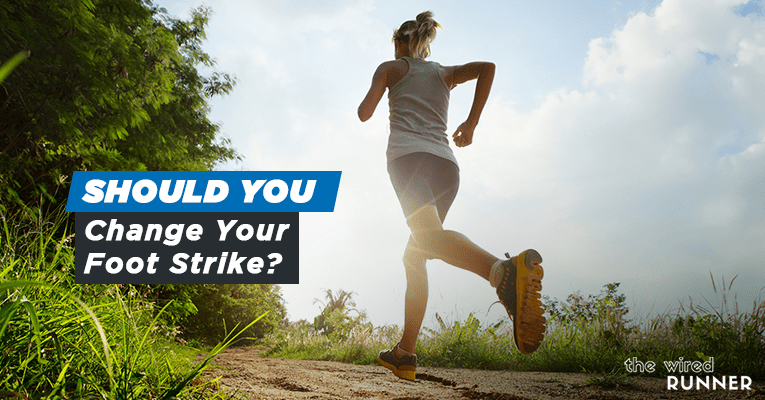 What’s the Difference Between the Three Types of Foot Strike?

It’s pretty simple. You land first on the part of the foot that the strike type is named after.

Check out this handy vid as an example, if you can’t quite picture it:

How Do The Pros Run?

Have you ever watched Usain Bolt win a race? That man’s heels are all up in the air.

Sprinters tend to favor the forefoot strike, and for good reason: it’s bouncier than landing on the heel and propels them forward like a spring.

Take a quick look at this slow-mo clip of some of the top sprinters battling it out. Not a heel striker in sight!

On the other hand, marathon runners tend to favor a heel strike, and research suggests that heel striking is more energy-efficient at these speeds.

How Do You Develop Your Foot Strike?

Nobody taught you how to land when you run. You just did it. That’s your natural gait. If you’ve never been to a running coach or had someone give you advice on your form, it’s highly likely that your form just developed naturally.

If you have been to a running coach, their input may have contributed to how your foot strikes now.

Interestingly, research also indicates that more runners may develop a heel strike due to the latest trend of extra-cushioned running shoes.

Shoes with a thick cushion in the heel naturally puts the heel closer to the ground on the foot strike, not only because of the design of the shoe, but also the heaviness of the foam in the heel.

Is Heel Striking Bad For Your Feet?

Heel striking gets a bad rap. Considering the majority of people do it naturally, it’s truly difficult to say whether or not it’s a bad thing.

Research does suggest that heel strikers are prone to foot and knee injury. However, there’s also research to suggest that rearfoot striking is beneficial for preventing Achilles tendon problems.

So there’s really no evidence to suggest that heel striking is much worse than any other kind. Yay for all of us heel strikers out there!

How Do You Figure Out Your Own Foot Strike?

What’s also interesting is that studies show that most people are completely mistaken about their own foot strike!

Before we get into this, it’s important that you understand that knowing your own foot strike is truly not a hugely important thing.

If you don’t know what kind of foot striker you are, there’s nothing wrong with you. You can absolutely still be an excellent runner without a clue about your foot strike.

However, if you do want to know for whatever reason, the best way to figure it out is to get someone to video you running. Slow it down on playback and you should be able to see quite clearly.

Can You Change Your Foot Strike?

Technically, with focused effort and consistent practice, you can change your foot strike. It’s like any part of running form; it can be changed with enough work and determination. 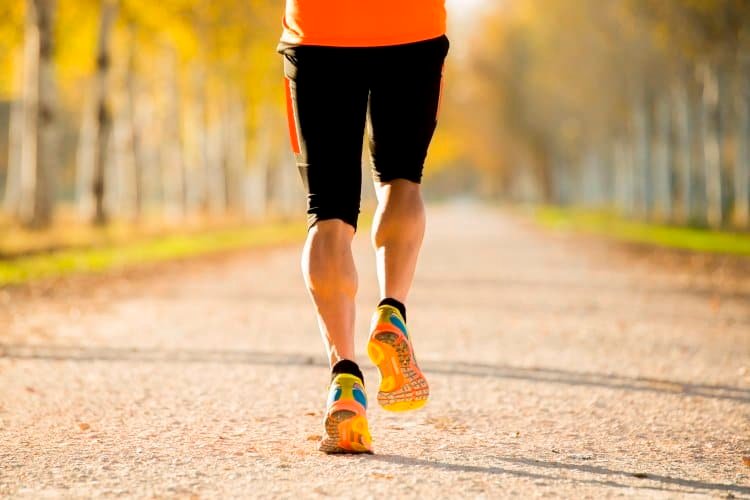 However, the better question would be: why should you (or shouldn’t you) change your foot strike?

Let’s have a quick look into some possible scenarios that may warrant the question.

If you fall into the 70+% of us who strike with the heel, research suggests that changing your foot strike to a midfoot or forefoot strike isn’t likely to improve your performance in any way.

What’s more likely to happen is that you spend a long time working hard on changing your foot strike, you go through plenty of frustration, possibly cause injury if you push yourself too hard, and end up with no improvement in performance to show for it.

There are plenty of other aspects of running that can improve performance much more easily than changing your foot strike. Focus on those instead!

Don’t change your foot strike simply because you read somewhere that a heel striker is more prone to injury than others. The fact is that you can get injured no matter how your foot strikes the ground.

In fact, the process of changing your foot strike can cause you injury too, as you’re forcing your feet to do things they aren’t really used to.

The only exception is if your current foot strike pattern is what’s causing you injury. If you’re a heel striker but you suffer from plantar fasciitis, or you’re a forefoot striker but you have painful metatarsalgia that affects your performance, it may not be a bad idea to consider changing your foot strike.

In these cases, it’s a long-term change that’s based on healing and preventing a current injury, not an injury that may or may not ever happen due to your foot strike.

How to Change Your Foot Strike

If you do decide that changing your foot strike is the way to go, there are a few things to consider doing.

It may be worth shifting to a shoe with a low (or zero) drop if you want to shift from heel striking to forefoot striking.

On the other hand, if you wish to make the change from forefoot striking to heel striking, do the opposite and choose a shoe with a higher drop.

Certain running drills can help you make the transition from one type of foot strike to the next. Check out Rockay’s running drills blog for some ideas!

The key is to incorporate them into your training schedule regularly. Doing them here and there isn’t going to help. Consistency is important to see lasting change!

If you’re serious about changing your foot strike, hiring a coach to help could be your best bet. They’ll know how to do it safely, effectively, and in the right way, keeping the risk of injury to a minimum.

There’s truly no need to change your foot strike if you aren’t suffering from constant injuries related to it. There’s no evidence to suggest that it will improve performance, so rather work with what you’ve got and make the most of it!

Take care to protect and look after your feet by wearing the right shoes for your arch, your gait, and the level of cushion you need. But rather than worrying about your foot strike, embrace what you have!