Home » Shoes » Saucony » Saucony Ride Vs Saucony Guide – Which Shoe Is Best For You?

Saucony Ride Vs Saucony Guide – Which Shoe Is Best For You?

Two of their most popular shoes are the Ride and the Guide. If you’re considering buying a pair of Sauconys, these are two models you’ll see pop up most often.

Both shoes are great daily trainers and are good for racing, too. They’re also quite similarly priced. So what are the differences you should be aware of? 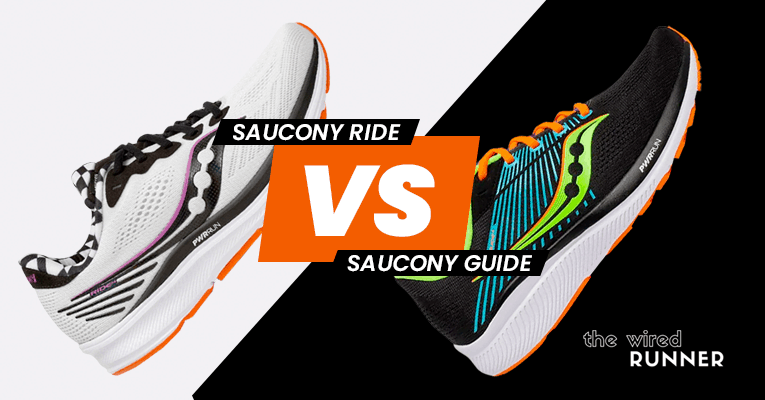 The Saucony Ride is a neutral shoe. It’s great for everyday use, and offers a good amount of support and cushioning where needed.

The Saucony Guide is a guidance shoe. Don’t confuse this with a stability shoe – it’s NOT meant for severe overpronators. But it offers a bit more specific support for slight overpronators or those who need just a touch more support than regular shoes.

This difference is what really separates the two shoes. The Guide will be a tad stiffer, due to the added guidance, while the Ride flexes better without the additional support.

Both the Ride and the Guide have recently launched their 14th iterations. We’ll be comparing the 14s, but throughout the article, we may make mention of the previous versions if necessary.

Let’s get into the specifics of the Saucony Ride vs Saucony Guide!

Both of these shoes have engineered mesh uppers, and incorporate Saucony’s Formfit technology. This tech uses a variety of features to create a hugging, form-fitting feel that keeps your foot firmly in the shoe while on the move.

These features include a sculpted footbed, plush ankle, and heel collars, and 3D-printed overlays. They work together to offer the perfect mix of comfort and support. It also keeps your foot properly locked in and secure, for both safety and comfort while running.

Both the Ride and the Guide have ample toe room and come in bright colors. Users have mentioned that the logo overlays on the shoes can become a chafing hazard if your foot is high in the bridge. 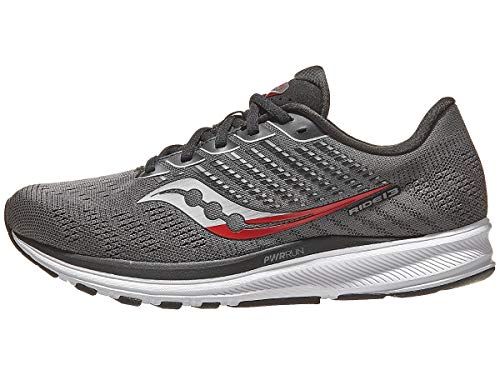 The Ride’s seamless mesh upper is well-ventilated and breathable, thanks to multiple perforations across the upper. Previously, the Ride used 3D-printed dots in the midfoot for extra support. These have been removed on the 14, increasing the airflow thanks to a wider perforated area.

The breathability is complemented by light support, offered by the logo overlays on the sides of the feet. It makes for the perfect mix of support and flexibility, and also provides a secure fit.

Some wearers have complained that the tongue feels a little too thick to be comfortable, but this will come down to personal preference.

The round, stretchy laces have remained in the upgrade from 13 to 14, which some users find annoying but others quite like. Being round in shape helps prevent hot spots against the foot. You’ll get 2 sets of laces with this shoe, one shorter and one longer.

The Guide also features an engineered mesh upper. It has a slight stretch, just enough to provide comfortable flexibility when your foot is locked down.

Like the Ride, an array of perforations allow air to circulate through the shoe effectively. The Guide also features the 3D-printed logo on the side of the foot for extra stability, without adding any extra weight.

Unlike the Ride, the Guide has traditional flat shoelaces. These contribute to getting a custom fit but may create pressure on the bridge of the foot.

Saucony uses their own PWRRUN foam in their midsoles. The original PWWRUN has been further developed to produce PWRRUN+ and PWRRUN PB foams, both of which are lighter than the original.

The Ride uses Saucony’s iconic PWRRUN foam in its midsole. Surprisingly, it hasn’t upgraded to the later versions of the foam, which makes for a slightly firmer midsole than the Guide.

Despite being fairly firm, the cushion is still soft enough to be comfortable and shock-absorbing underfoot.

The Guide is crafted with PWRRUN+ foam. It’s both softer and bouncier than the other PWRRUNs, so runners can expect to feel noticeable responsiveness that’s somewhat unusual for a “stability” shoe. 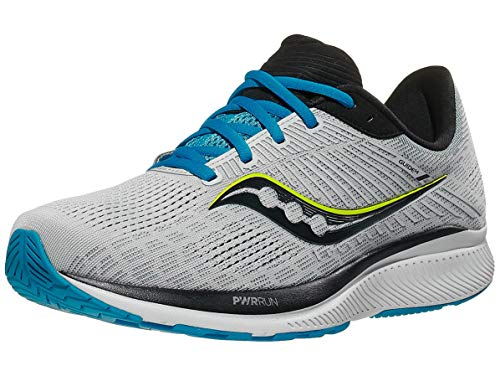 Classified as a light stability shoe, the Guide still feels more like a neutral shoe. Its added stability comes from a TPU Guidance Frame within the midsole. Basically, this is a firmer, more supportive section of foam, and it runs from the rearfoot to the midfoot along the inside (medial) part of the shoe.

This helps to prevent the foot from rolling inward, so slight overpronators will benefit from it. It’s a subtle form of support and is less intrusive and noticeable than the classic medial post.

Both shoes feature flex grooves in their outsole, which offer some flexibility on uneven or rough terrain and allow the wearer better control. Saucony’s are also known for their wide toe boxes, which not only allow the toes space to splay, but also offer some stability on the ground.

The base of the Ride is wide and stable. A TRIFLEX outsole with forefoot flex grooves offers a good combination of grippy traction and forward-moving flexibility.

The Guide features a full rubber outsole. It offers an impressive grip on the ground, helped along by the textured pattern. Flex grooves in the forefoot help the toes to move naturally and assist in a more explosive toe-off.

Both shoes are made more flexible in the toe-off by the addition of forefoot flex grooves, which allow the shoe to move with the toe joints as they flex.

The Ride is fairly stiff due to the firm PWRRUN cushioning. That being said, the Ride is by no means a rigid shoe. Runners who are used to plush cushioning in their shoes, though, may find the Ride to be noticeably stiffer.

While both shoes are well-cushioned, the Guide’s added support makes it slightly firmer. It doesn’t flex as much as the Ride.

Both the Ride and the Guide have a heel-to-toe drop of 8mm. This is quite mid-range and offers a nice rise that doesn’t place too much pressure on the toes but also doesn’t have you running flat-footed.

The Guide has a very slightly higher stack height, 32.5mm in the forefoot and 24.5mm in the heel, as opposed to the Ride’s 32mm and 24mm.

Both the Ride and the Guide are average in weight. The Ride is a little lighter, but as the Guide is technically a stability shoe, it can be expected to be slightly heavier.

The Saucony Ride and Guide are priced the same, at $130 at the time of writing.

The Saucony Ride and Saucony Guide are two of the brand’s most well-loved and best-selling running shoes. They’re both easy to recommend for runners who are looking for everyday running shoes.

However, the Ride better suits runners who don’t need extra stability. It’s suitable for daily training as well as racing, although you won’t get the kind of speed out of it as you would some other dedicated speed shoes.

Runners who overpronate slightly and need a touch more stability and support should go for the Guide. It’s suitable as a daily trainer and is comfortable on the feet for those who could do with a little extra support, but find a full stability shoe restrictive. 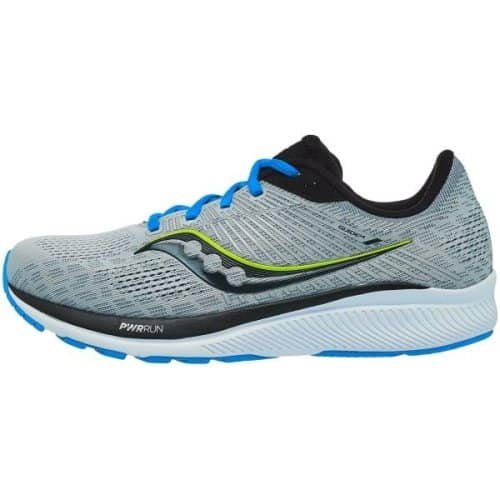 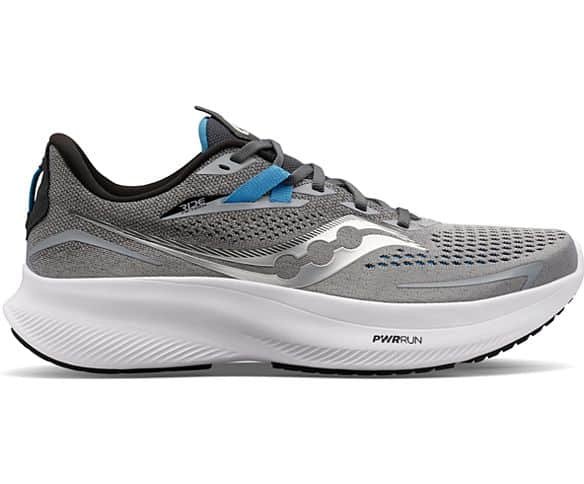