Saucony’s carbon-plated racing shoe, the Endorphin Pro, made its debut in 2020. It was followed not long after by the Pro 2, with a few but well-received updates.

The Saucony Endorphin Pro+ is the latest iteration, released just this week. It’s the lightest of the three by far, making it even more coveted as a race-day shoe.

Note that the Endorphin Pro+ is a neutral shoe, so those who overpronate will most likely need to choose a different shoe.

It’s also limited in availability, so buy yours now! 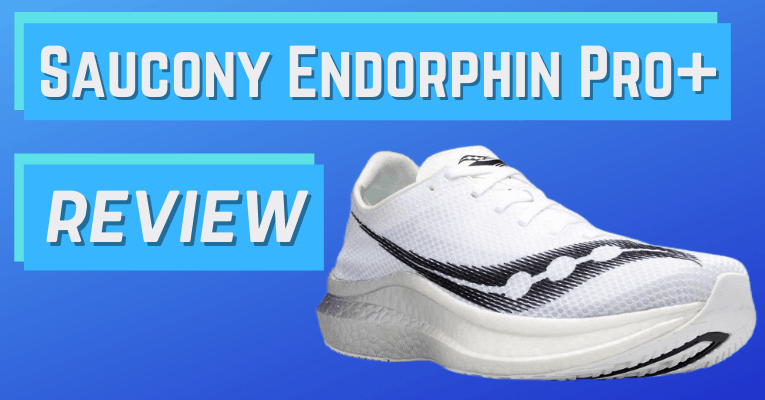 If you want a quick but accurate indication of how much difference this feather-light shoe could make to your running times, just look at the results achieved in the shoe’s launch event.

Athletes competed on a technical course weaving through a UNESCO World Heritage Site, all wearing a pair of Saucony Endorphin Pro+ running shoes.

The most impressive occurrence of the event was Swedish athlete Otto Kingstedt smashing his own world record. The Swede set the previous 10km WR for deaf and hard-of-hearing athletes, 30:06.

With the sleek and speedy Endorphin Pro+ on his feet, he managed to take 10 seconds of it to set a new World Record of 29:56.

As well as this exciting feat, two other athletes beat their own PBs; Norwegian Tom Erling Kårbø, running 8.8% faster than his previous personal best, and USA runner Helen Schlachtenhaufen, beating her own personal record by almost 3%.

Competitive runners are excited about the Endorphin Pro+ for good reason.

Despite its high-quality, super lightweight construction, the Endorphin Pro+ does have a few cons. These may not be true for all runners, but could be a deal-breaker for others.

It’s made of a mixture of smooth suede and breathable mesh. Barely-there engineered mesh mixed with subtle suede conforms to the foot and allows for good airflow around the feet, keeping conditions optimal for a speedy and comfortable race. 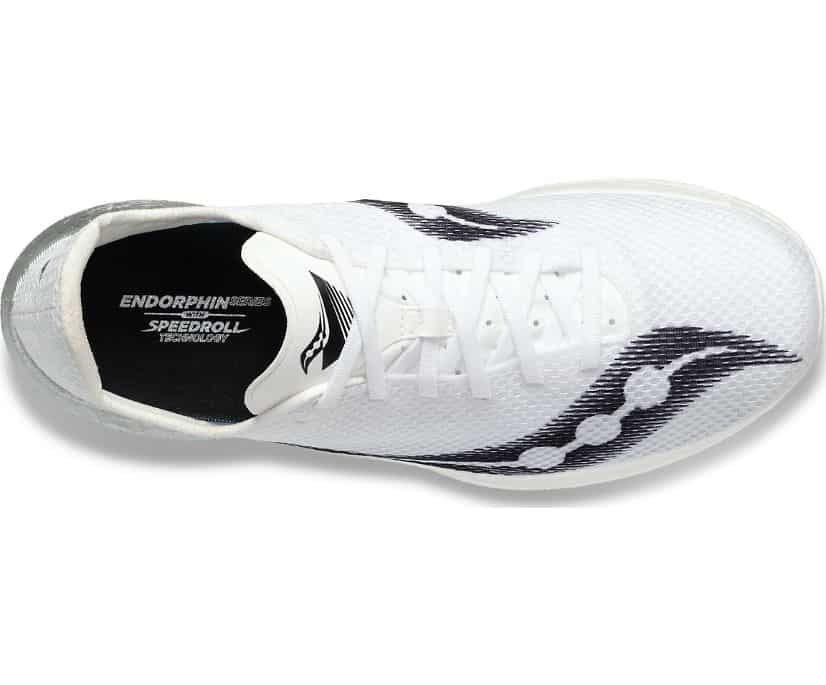 The suede tongue is thin and adds hardly any weight. Runners who are used to a padded tongue may find this uncomfortable, but it’s an excellent feature that saves weight and improves aerodynamics.

Surprisingly, the upper seems to fit more comfortably in the midfoot on runners with narrow feet. Those with wide feet will still get the benefit of a spacious toe box, but may find it slightly too snug in the midfoot

This is where all the speed is. There are a good few technologies in the midsole that all work together to create the extreme performance of this shoe.

The midsole is molded from a slab of PWRRUN PB foam, the company’s latest foam compound.

PB stands for PEBA, which is short for polyether block amide. This thermoplastic elastomer material is known for being responsive, low-density, and highly flexible.

To give you an idea of how low-density this foam compound is, it’s about ⅛ of the density of the foam in their spike-plate shoes.

Despite its density and relative softness, the compound has been engineered to be highly durable. It’s made to last much longer than regular PEBA-based foams, which is partly thanks to its beaded nature.

Saucony has been working on creating a PEBA insole for several years, and they’ve got it right in the Endorphin Pro+.

Of course, this is also where the high-performance S-curved carbon plate resides. Working with the PWRRUN cushion, it provides a really nice snappy energy return, giving you that “raring-to-go” feeling.

Runners who aren’t used to the feeling of a carbon plate may find it to be fairly firm underfoot. This doesn’t ease up, so if softness is a must for you, then you may not be a fan of the carbon plate in this footwear.

But if you’ve tried and enjoyed running in the Endorphin Pro or Pro 2, this one has a similar feeling.

Another bit of tech you’ll find in the midsole is Saucony’s Speedroll technology. This is an early-stage meta-rocker, giving the shoe a pleasant forward-rolling feature on top of everything else. 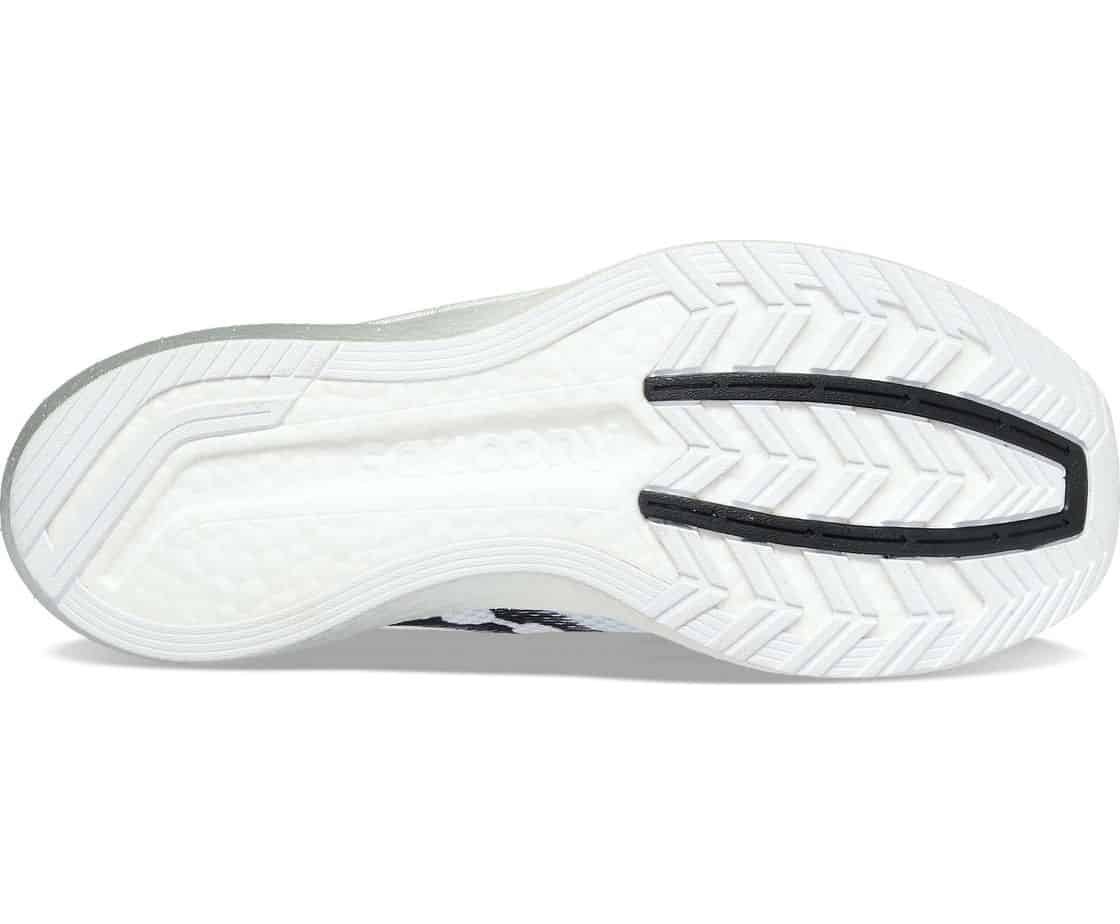 2.85mm of rubber on the forefoot and rearfoot makes the outsole of the shoe fairly durable. Much of the inner section is exposed midsole, although this doesn’t typically touch the ground when running on flat, clean surfaces.

There is a chance of the exposed midsole being damaged on rough terrain, or if you happen to land on a stone or debris.

The reduced weight is where the Endorphin Pro+ really shines. The stripped-down upper gets rid of a significant 0.6 ounces from the previous iteration, putting the Endorphin Pro+ in the sub-7oz category, firmly cementing its status as an excellent racing shoe.

The men’s shoe weighs 6.9 ounces, while the women’s comes in at an impressive 5.9 ounces.

It’s Saucony’s lightest shoe to date, which makes a huge difference to performance when paired with the carbon plate and responsive cushioning.

The Endorphin Pro+ has a heel-to-toe drop of 8mm. This hasn’t changed since the original Endorphin Pro, and is a nice medium for most runners.

There’s no need for a severe heel drop with the addition of the carbon plate. The plate itself does an excellent job of propelling you forward, and there’s no unnecessary pressure placed on the forefoot and toes.

The price is where most runners may think twice about getting the Saucony Endorphin Pro+. This new version comes with a price tag of $250, which is a full 50 dollars more expensive than its predecessor.

That being said, $250 is a pretty standard price for a racing shoe. Considering that the Pro+ is already showing signs of being able to improve your performance significantly, we can’t complain about its cost.

Saucony has certainly joined the ranks of the elite racing shoes with the Endorphin Pro+. It’s lighter, faster, and sleeker than ever, and an extremely worthwhile competitor in the racing shoe world.

If you’re a competitive athlete who values speed, then the Endorphin Pro+ would be an excellent choice. The carbon plate provides superb bounce, in conjunction with the PWRRN PB cushioning.

Weight-watchers will also be delighted at the Endorphin Pro+’s lightweight nature. The shoe manages to pack in exceptional padding while remaining as light as possible.

On the other hand, runners who overpronate may not find the shoe helpful at all. Those who need extra stability, whether for overpronation or more structural stability around the foot, should consider another shoe.

Be prepared to pay for the tech you’re getting with the Endorphin Pro+. If you’re on a budget, then this may not be the shoe for you.