Home » Training » Should You Go Running With Ankle Weights?

Should You Go Running With Ankle Weights?

There are a variety of ways to increase the intensity of your run.

You could run on an incline or decline, increase your pace, or choose the trail instead of the road. One of the ways to place more of a load on your legs while running is to run with ankle weights.

But should you go running with ankle weights or can it do more harm than good? There are a number of factors to consider before strapping on some ankle weights as you go for your daily run.

Let’s take a look at what they are, how they can be used to strengthen your legs and improve your running – and whether or not they’re the best choice for you. 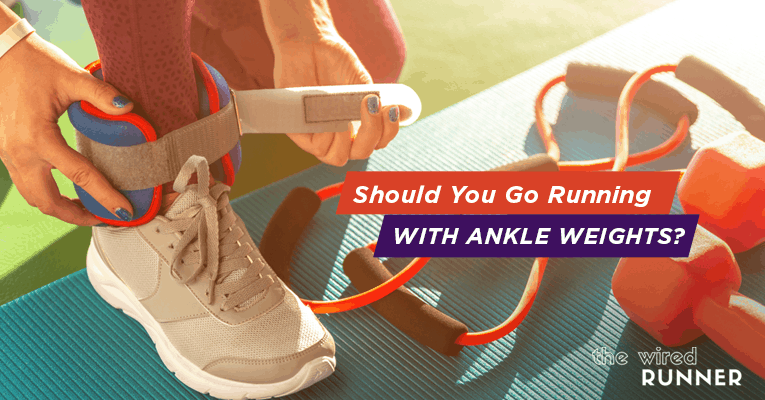 What Are Ankle Weights?

Ankle weights—also known as leg weights—are wearable weights that wrap around your ankles with velcro straps.

The weights are available in a range of weight levels, from 1 to 5 pounds. There are also adjustable weights that allow you to add or remove weights.

Ankle weights are commonly used in strength training to add weight to exercises such as leg raises, ballerinas, and bicycles.

When Running or Walking, Should I Use Ankle Weights?

While using ankle weights when running does provide more resistance, it also puts you at a high risk of injuring yourself. You may even develop muscle imbalances due to an uneven dispersion of weight.

Your running form changes, as your body needs to compensate for the extra weight and still be able to pick your feet up fast as you run.

Having heavy weight on your ankles while you’re running—especially if your legs are not extremely strong—can throw your running form off as your knee drive decreases and instead you develop a “leg drag”.

This in itself is not optimal running form. But it also means that if you use ankle weights often, you could adapt to this new gait. You will probably find it hard to regain your correct form when you run without the ankle weights.

You’ll also be at more risk of tripping or losing your balance with ankle weights on. It’s difficult to stop suddenly, as the upper body may continue moving as the legs stop, causing you to fall. Your control over your own legs will be less. If you already have weak ankles, the chance of twisting an ankle is much higher.

Losing your balance or running with improper form not only leads to a greater load on your joints in the legs but can also lead to injuries along the muscle chain, including the hips, lower back, and upper back injuries.

Ankle weights also put extra stress on the IT band and the hip flexors as one’s gait changes. Your joints take more of a beating, as you’re landing harder with each step due to the extra weight. This can lead to debilitating pain and injuries that could have you hanging up your running shoes for 6 to 8 weeks or longer.

It’s also not the most effective way to build up strength and muscle in your legs. The chance of injury is higher than the potential for building muscle. You should consider a form of cross-training that targets the legs, such as rowing, weight training, or working out on the elliptical.

If you are determined to add resistance training to your running, a weighted vest would be a safer option. 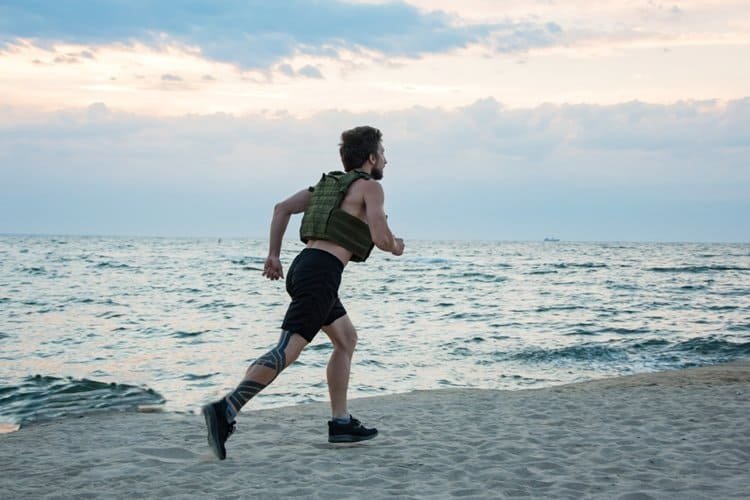 Not only does it have the potential to add more weight than ankle weights, but the weight is more evenly distributed and the core takes most of the load, not the legs.

You would still need to take care to maintain proper posture and form when running with a weighted vest.

If You Do Try Running with Ankle Weights

If you don’t have access to a weighted vest or other forms of cross-training and you can only run with ankle weights, then make sure to do it safely and carefully if you want to benefit from it.

Start slowly working them into your running routine. You will need to build up strength slowly so that you don’t injure yourself. To start, use ankle weights on one short run per week, and as you get used to it, increase either the amount of time or the distance you’re running with them.

That being said, you should also only use ankle weights for short distances. Running for long distances with ankle weights increases your potential for injury as it puts far too much load on the joints and ligaments.

How to Use Ankle Weights

Ankle weights are easy to use. Just wrap the weight part around the ankle and hook it with the velcro strap. Adjust the strap to fit your ankle.

The weight should sit just above the ankle joint so that it gets stopped from falling down while you’re wearing it. It should be snug but not restricting.

If used carefully and properly, one can derive some benefits from wearing ankle weights. These benefits will be the same whether walking or running, although there is an increased chance of injury when running.

Using ankle weights safely can develop one’s endurance, as the body has to work harder to do the same kind of exercise it normally would.

By building strength—even slowly—you’ll find that after a period of time, you can run faster and further than you used to, with the same amount of effort.

While you won’t build a lot of strength in comparison to doing cross-training, you can tone your legs by wearing ankle weights.

You can also burn more calories since you have to work harder to do the exercise. You can add progressive overload with ankle weights, by increasing the weight gradually.

Although we don’t advise it unless you’re an elite athlete or a very accomplished swimmer, some people use ankle weights while swimming. These weights should be the lightest ones possible to avoid sinking and can actually help to build ankle strength without impact on the joints.

When to Avoid Wearing Ankle Weights

Individuals with weak ankles, tight calves, or weak hip flexors should avoid using ankle weights as incorrect use of the weights can aggravate these conditions and increase the chance of injury. 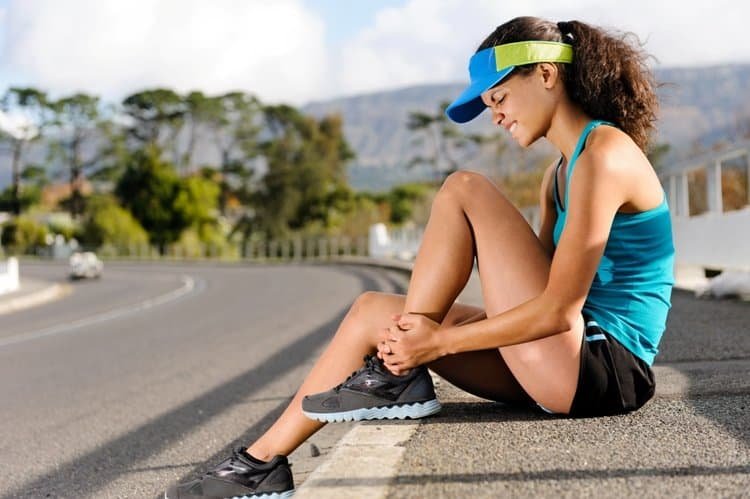 If you have joint pain already—even if it’s not in the legs—then using ankle weights is not recommended. Also, individuals who are overweight or underweight should avoid ankle weights until their fitness levels have improved.

Exercises to Try with Ankle Weights

If you have a set of ankle weights and you’re disappointed to hear that you shouldn’t run with them, there are still plenty of exercises you can do to strengthen your legs with them.

Here are a few you should learn:

Attach the ankle weights to your ankles. You should be facing an elevated surface—a high step, box or seat—with your feet hip-width apart. Place one foot onto the elevated surface and step up. Concentrate on lifting yourself off the floor by contracting your glutes and quads.

This is similar to step-ups. Place the weights on your ankles and stand in front of whatever it is that you’re stepping onto.

Step up with one foot. As you bring your other foot up, instead of placing it on the box next to your first foot, lift your knee up close to your chest. This should be a dynamic movement, pushing up through the heel of the foot that’s on the step.

Step straight back down, so that your other foot doesn’t touch the step at all. Then, repeat the movement for 5 to 10 reps. Change feet and repeat the entire exercise.

Attach the ankle weights to your ankles. Stand on a flat surface with your feet slightly wider than shoulder-width. Drop into a squat—sit back as though you’re sitting down—keeping your knees in line with your feet until your thighs are parallel to the floor.

Then, drive up through your heels—pulling your glutes forward—until you’re standing upright again. As you come up, lift one leg and extend it out to the side, like a kick. Bring it down again and go into your next rep.

With the ankle weights attached to your lower legs, lie flat on your stomach, with your arms extended out in front of you.

Lift your arms and feet off of the floor and hold them in the air for as long as you can. Your chest should lift slightly off the floor, as should your quads.

You will look like Superman flying! You should aim to hold this position for 15 seconds. Then, return your limbs to the ground, rest for a second or two, and do your next rep. One set counts as 15 seconds in the air, and you can do 5 sets.

As always, make sure to keep your back straight and don’t stiffen your neck when doing this exercise as it could cause injury.