Home » Trail Running » What To Do if You Get Caught Running in Lightning?

What To Do if You Get Caught Running in Lightning?

There’s nothing as pleasant and calming as running in light rain. Less chance of sweating or overheating, and the fresh smell of rain on grass!

Of course, you do need to be extra careful when running in the rain. The ground can be slippery, light may be murky, and there’s always a chance of it developing into a storm, which is possibly the most dangerous rainy condition to be running in.

Do you know what to do if you get caught running in lightning? Lightning can be extremely dangerous, and you shouldn’t ignore it if your run happens to be interrupted by stormy weather.

Here’s our best advice for you to stay safe if you find yourself out in the open in bad weather. 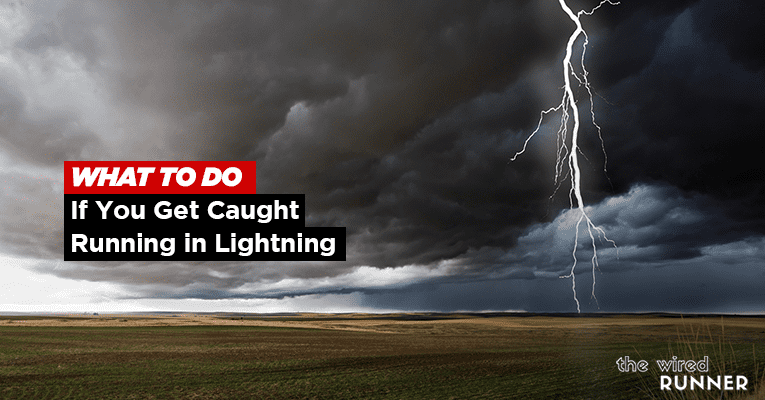 The Science Behind Thunder and Lightning

Thunder and lightning don’t always occur together. On occasion, you can have lightning without the thunder.

In short, if you hear thunder while you’re out on a run, you’ll need to immediately take precautions against lightning.

Thunder is caused because the lightning heats up the air around it, causing it to expand super fast. The speed of this expansion causes an explosive shock wave, causing the rumbling sound and sometimes vibrations.

While thunder isn’t dangerous, lightning is. It’s basically a gigantic spark of electricity from one thing to another – either between two clouds, or between a cloud and the ground.

Remember when your parents told you not to stick your kid fingers into the plug points? Electricity is dangerous!

To give you an idea of how dangerous lightning is, one flash is around 300 million volts and 30,000 amps. In comparison, that dangerous plug point your parents warned you about contains 120 volts and 15 amps!

How to Tell How Far Away the Lightning Is

You’ll need to do a bit of math in order to figure out how far the lightning is away from you. You’ve probably heard that you should count the number of seconds between the lightning and the thunder, but how does that translate into distance?

Keep in mind the 30/30 rule. If there’s less than 30 seconds between the lightning and the thunder, you should get indoors immediately. Once there, you should stay indoors for at least 30 minutes after the last thunderclap.

The safest thing you can do is avoid the lightning altogether. But we understand that it’s not always so straightforward.

Sometimes you start your run in lovely, sunny weather, and find yourself running through a storm half an hour later!

Here are our top tips to stay safe outdoors when there’s lightning around.

It’s always a good idea to check the weather forecast for the day before planning your runs. If there are thunderstorms on the radar, it may be best to opt for the treadmill or a cross-training session instead of taking a run.

If you really want to get out on the road or trail, knowing what’s coming weather-wise can help you choose an appropriate time for your run. If thunderstorms are predicted for the afternoon, run in the morning.

However, if you can’t change the time you run or switch to the treadmill, make sure your run doesn’t stray too far away from shelter in case you need it.

You can find out the weather on TV or radio, but it’s also super easy to check it out on your phone. There’s no excuse for not being prepared!

As the saying goes, “When thunder roars, go indoors”. Easy to remember! Keep in mind that when you hear thunder, lightning isn’t far away. It’s in your best interest to get to shelter as soon as you can. 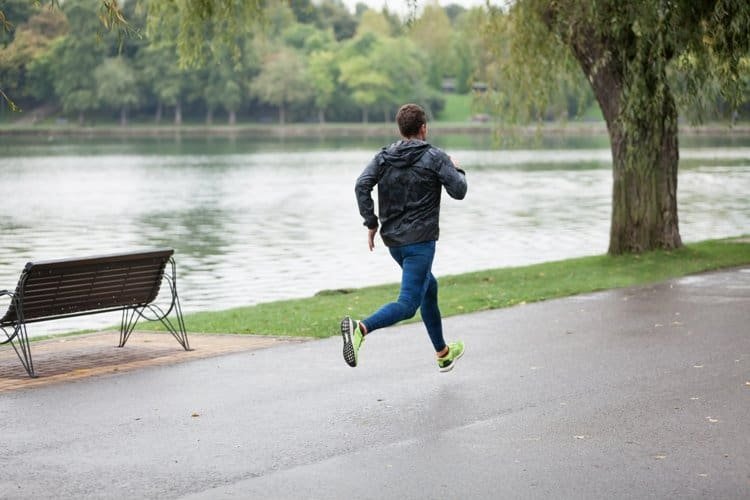 Also, understand that it doesn’t need to be raining for lightning to be dangerous! You can be struck by lightning in very mild weather, so it’s definitely best to take precaution.

You can take shelter in a shopping center, store, office building, your home, or someone else’s (with permission, of course!), or in a hard-top vehicle.

3. Get Away From Danger

If you can’t get indoors, there are other things you can do to reduce the danger. You may have heard that you should get as close to the ground as possible, which will help but it won’t remove the danger.

At all costs, avoid trees, rocky overhangs, and bodies of water. They’re all more susceptible to lightning strikes, and you don’t want to be there when it hits!

It kind of goes without saying, but you should also avoid items that conduct electricity, like electric fences and power lines.

Get to the lowest ground you possibly can. If you are forced to wait it out right where you are, don’t flatten yourself on the ground, though.

Round yourself into a ball and tuck your head into your body, with your hands over your ears. You want to be touching as little of the ground as possible.

If you’ve been running in a group and a storm has struck, as tempting as it is to band together for protection, you’d be better off separating. If lightning strikes the ground near you, it can injure many people in the vicinity.

Separating can help to reduce the chances of the entire group being injured in the case of a strike. While this won’t necessarily prevent you from getting struck, it’s simply a good idea to prevent mass injury if it does occur.

A direct lightning strike is actually quite rare. In many cases, it strikes something else first and then hits the person as a “secondary strike”.

Ground current is probably the most common. When lightning strikes the ground nearby, it can travel through the ground and strike the person nearby, entering through the feet and exiting elsewhere on the body.

In other cases, lightning can strike a tall object nearby and “jump” to a person nearby. Or, more rarely, lightning can travel through a metallic object, which conducts electricity (like a railing) and strike a person who’s holding or touching the object.

Remember, the body consists of almost 70% water. Water conducts electricity, so lightning actually moves quite easily through the body when a person is struck.

With this in mind, it’s easy to understand why you should try to avoid touching the ground, metallic objects, and standing near tall objects in a storm.

If you can’t remember exactly what to do during a thunderstorm, perhaps you should rather keep in mind what not to do! Don’t …

1. Stay in Open Spaces or Structures

Open spaces or structures can attract lightning, so if you find yourself in an open space, try to get out of it as soon as possible.

Of course, wide open areas like sports arenas, golf courses, parks, playgrounds, stadiums, and beaches should be avoided too.

Trees, sculptures, cell phone towers, and other high structures should definitely be avoided in stormy weather. 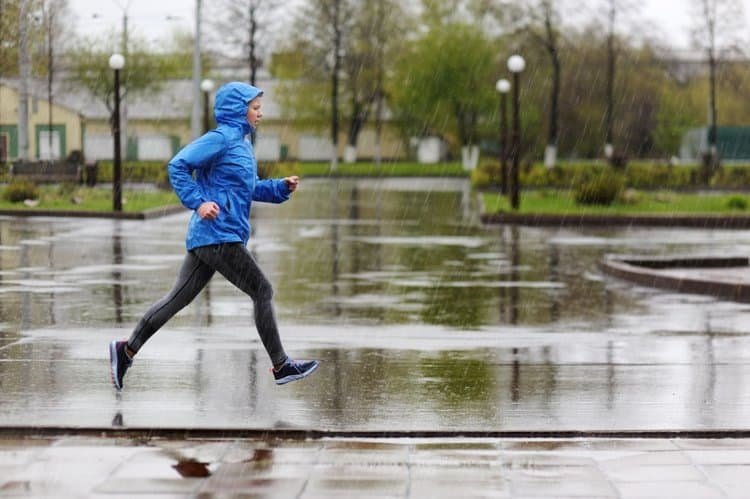 These are at more risk of being struck, and there’s a chance of the strike jumping off and hitting people nearby.

It can be tempting to lie down in order to get as low as possible and be a little more away from the lightning. But the problem with this is that when you lie down, more of your body is in contact with the ground, leaving you more at risk of being struck.

Try to reduce ground contact as much as possible. This will minimize your risk of being struck through the ground.

While lightning isn’t necessarily attracted to metal objects, metal does conduct electricity very well. So if there’s anything metal near a lightning strike, it may carry some of the residual electricity through it.

If you happen to be touching a metal object nearby, you could inadvertently increase your risk of being struck. This may include things like railings, metal pipes, or fence poles.

5. Stand On or Lean Against Concrete

Concrete itself doesn’t conduct electricity. But don’t forget about the metal wires and bars that may have been built into the concrete.

Standing on concrete floors or leaning against concrete walls can leave you open to being struck through metal bits you can’t even see!

First Aid If Running During a Thunderstorm

If there’s any chance of you running during a thunderstorm, it’s a good idea to learn a bit of first aid on the off chance that you come across a lightning strike victim.

Don’t worry – the chances of you being struck by lightning are 1 in 15,300, but it’s better to be prepared and never use the knowledge than to be unprepared and need it!

The first thing you need to know is that when someone has been struck by lightning, their body isn’t carrying an active charge. You can touch them safely and administer first aid that could save their life.

The next most important thing is to contact emergency services. If someone else is nearby, ask them to do so while you perform first aid. This is another reason we recommend keeping an emergency first aid kit in your vehicle!

Keep in mind that you’ll need to continue performing CPR until emergency services arrive. Once you’ve started, there’s no going back until you hand the patient over to professionals.

While you’re performing CPR, someone else should check for injuries. If you’re the only one around, don’t waste time checking for injuries before starting CPR.

Lightning enters in one place and exits in another, usually on the other side of the body. You can expect to find two wounds, and there may also be signs of broken bones and internal bleeding.