It’s an excellent thing to have with you while running to increase peace of mind and prevent or get out of a dangerous situation.

We’ve put together a runner’s guide for using pepper spray the right way to keep you safe on a run, both during the day and at night.

We’ll explain how it works, so you have a good idea of the mechanism behind it, and explain exactly how to use it for the best effect and keep yourself safe while using it. 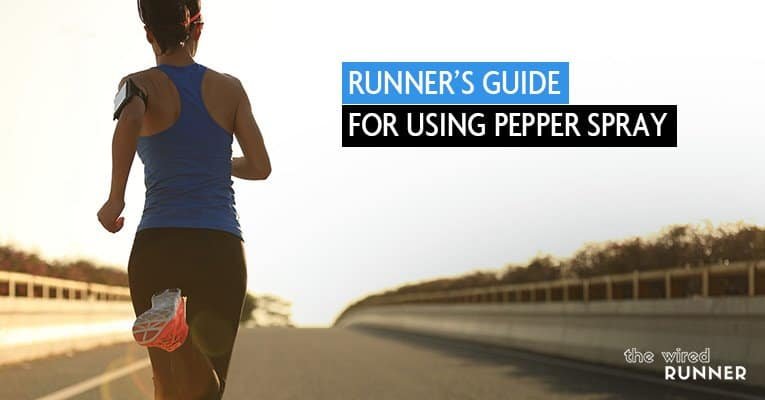 What Is Pepper Spray?

Pepper spray is a popular self-defense tool. It’s easy to carry with you and highly effective while being non-lethal.

It’s made up of a mixture of ingredients that form a non-toxic but extremely unpleasant-to-come-into-contact-with solution.

It’s all-natural but contains various heat-inducing ingredients that can cause painful and long-lasting effects when they come into contact with the skin and eyes.

Its active ingredient is oleoresin capsicum—OC—which includes a compound called capsaicin. This is the ingredient that’s found in hot peppers!

How Does Pepper Spray Work?

The oleoresin capsicum is usually mixed with a water-based solution and a propellant, and then it’s placed into an aerosol spray container.

This is the best way to dispense the pepper spray at high speed and in a certain direction.

When the user presses the spray button, the pepper spray is dispensed into the air into the space of the person who is harassing or attacking them.

How Strong Is Pepper Spray?

The strength of pepper spray depends on the brand. It’s measured in Scoville heat units—SHU—a scale used to determine the heat level of peppers.

What Are the Effects of Pepper Spray?

Pepper spray can have some nasty effects when it comes into contact with the skin, eyes, and throat.

Usually, the pepper spray will be sprayed in the direction of a would-be assailant’s face. When it comes into contact with the skin, it causes a burning sensation, which worsens when rubbed.

But the more severe effects are when it comes into contact with the mucous membranes of the eyes, nose, lips, and throat.

The mucous membranes become irritated and swell, which can cause temporary blindness and trouble breathing.

Other likely symptoms include coughing, choking, and nausea, which may lead to vomiting depending on how much of the pepper spray has been ingested.

A single short burst of pepper spray can affect a person for up to 45 minutes! This gives you plenty of time to escape from the situation.

The effects, however severe, are not permanent, and normal vision, respiration, and feeling will usually be restored within an hour.

How Far Can It Spray?

The distance a pepper spray canister can spray depends on the manufacturer and the canister. It can be anywhere from 3 to 10 feet, with the longer distances mostly being from canisters that emit a stream versus those that emit a spray.

But 3 to 10 feet is usually a good distance to use your pepper spray. Most situations that will require you to use pepper spray are within your personal space, so you generally don’t need one that reaches more than a few feet.

What Do I Need to Know Before Using It?

Pepper spray should be used as a last resort. It’s a good idea to consider alternatives to avoid a dangerous situation in the first place.

Make sure you run in a safe place, like a well-lit neighborhood, even at night. Avoid unsafe, dark, or lonely places that could make you an easy target.

If you can, it may be a good idea to consider getting a treadmill so you can run at any time of day or night in a safe environment. 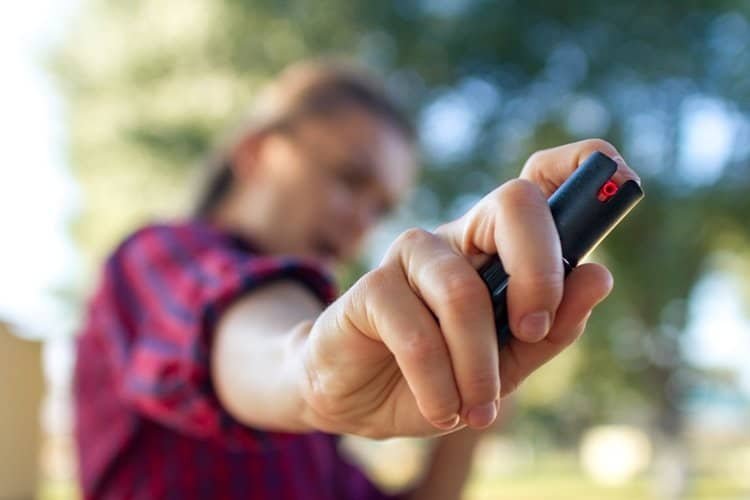 You should also know that there are legal limitations to using pepper spray. If you spray an innocent person with pepper spray or use it irresponsibly, you may face criminal charges.

To be legal, you can only use pepper spray in self-defense.

How to Use Pepper Spray

Some pepper sprays are designed to be handheld. Others will be clipped to your belt, strapped to your wrist or arm, or inside your running belt, and you will have to grab them in an emergency.

Make sure you get a good grip on it when you have it. If you can, we advise using your thumb as the button-pressing finger, so that you can wrap your four fingers and palm around the canister for a better grip.

When you get your pepper spray, consider the dispersal pattern—the way it’s released out of the canister when you press the button.

The dispersal pattern will determine the distance of the spray, how much of the substance gets released with each spray, and how—and where—exactly to spray it.

This is the most common type of pepper spray. It deploys from the canister in a long, stream-like pattern, almost like what you would see coming out of a water gun.

This kind of pepper spray is often used by members of the public and law enforcement officers.

The stream-like pattern is the most resistant to wind due to the long, thin stream. These canisters also usually have a lot of volume, as not very much is dispersed with each use.

However, this dispersal pattern does mean that you need good aim, as you will need to get it directly in the eyes or mouth of your assailant. If you miss, they won’t be affected.

The fog or cone-mist type of pepper spray is more commonly seen in animal repellents like bear spray — it covers a wider area during the spray pattern.

This is extremely effective because the released droplets can remain in the air for a long time. This leaves multiple opportunities for your assailant to breathe it in, and it doesn’t require specific aim like the stream does.

However, these are easily affected by wind. If there’s a heavy wind, your spray could be blown away from your assailants, towards you, or into nearby homes or buildings.

Gel and foam pepper sprays come out of the can similar to shaving cream, although they still have quite a good range.

You will also need good aim for these sprays, but once it covers the eyes, the assailant will not be able to see. Rubbing only spreads the foam or gel and makes the pepper spray burn more.

However, be careful that the assailant doesn’t throw foam back at you, which will then lead to you suffering the same symptoms.

What to Consider With Pepper Spray

Before you use your pepper spray, check how many sprays on average there are in one can. You can calculate how many sprays you have left so you never get caught with an empty spray can. 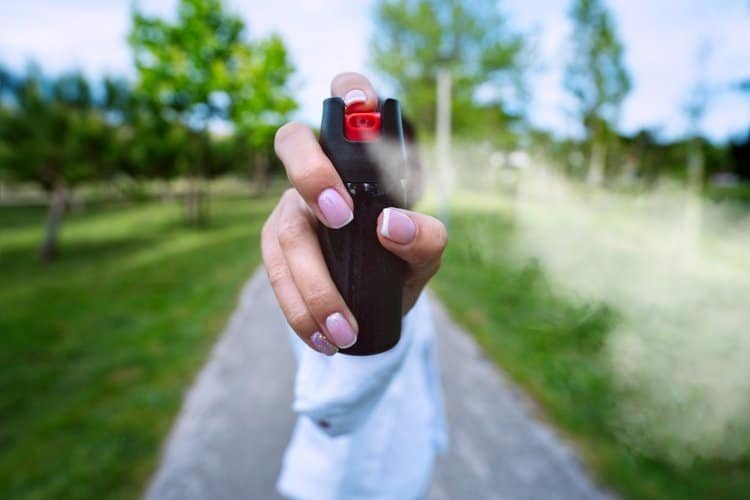 However, it is a good idea to replace your pepper spray with a new one once it’s been used, if you can.

Where and how would you prefer to carry your pepper spray? If you’re nervous about running in the dark, you may want to keep it in your hand at all times.

Many types of pepper spray come with straps that help you to hold it in your hand while running.

Whatever type of pepper spray you choose, it should be easy to access. If you want to keep it in your running belt, we recommend practicing getting it out in a hurry and getting a good grip on it.

We advise choosing a pepper spray with a good range so that you can keep your assailant from getting too close. Most can reach between 3 and 10 feet.

Arm and Disarm Your Device

Most pepper sprays come with some sort of locking device to prevent the mechanism from accidentally engaging while in a bag or pocket.

It’s a good idea to prepare the device for use when you begin your run so that you can use it quickly without having to disengage the safety when an assailant is coming toward you.

But don’t forget to put the safety on again when you finish your run!

It can also attract other people’s attention, who can come to your aid if necessary.

For a mist spray, you should still aim for the face but move upwards and downwards instead to get the best coverage.

Pepper Spray for Running and Walking

You can find a wide variety of pepper sprays specifically designed for runners and walkers.

They include pepper sprays with a wristband, handheld sprays, those that can be clipped onto your belt, and even special pepper sprays designed for baby strollers.

Some pepper sprays also include LED lights and safety alarms, to provide even more safety when you’re out on a run or walk.

What to Do After You Use the Spray

There is a chance of the spray transferring onto you and causing the same symptoms, so we advise getting away from the situation as soon as possible.

Once you’re safely away from the situation, you should contact the police and inform them of what has happened.

It may be difficult for somebody to find their own way to safety once they’ve been sprayed, so it may be easier for the police to find your assailant.

If you do happen to get pepper spray on yourself, rinse the area thoroughly with cold water until it stops burning. You may need to rinse multiple times before the oily substance gets washed off and stops affecting you.

It’s a good idea to keep a small first aid kit with you so that you can get your skin and eyes clean as soon as possible to prevent having to deal with those same nasty symptoms your attacker has!

How to Choose a Running Light

Best Running Self Defense Products in 2022

Best Pepper Spray For Runners in 2022

Best Personal Alarms for Runners in 2022