When To Replace Running Shoes

Running shoes take a pounding. It’s inevitable they’ll need to be replaced at some point. The question when should you replace your running shoes?

The most common answer you hear is: change them after you’ve run 300-500 miles.

And what if you don’t keep track of your mileage? Then it’s even more confusing.

So what should you do?

First, we need to understand why the standard 300-500 miles answer is so common.

Because it truly does vary from runner to runner.

Your size 1 friend who is barely 5 feet tall, weighs less than a 100 lbs, and has perfect running mechanics will get much more mileage on a pair of running shoes compared to a stocky, 6 feet tall runner who overpronates.

The general rule is that heavier runners put more stress on a running shoe and need to replace it more often.

A second factor affecting shoe wear is your running mechanics and gait.

If you run in a way that regularly stresses the same parts of the shoe over and over, it will wear out faster. Someone with a more even gait will spread out the impact from the pounding throughout more of the shoe, making it last longer.

An example would be a runner who lands hard on their heels. These runners put more force on the heel of the shoe, causing it to wear faster in the heel.

Other runners might wear a shoe out more quickly on the outside sole (if they supinate, or roll outwards) – or if they overpronate (roll inwards).

If you aren’t sure if you are this type of runner, look at your existing shoes for signs of extreme wear on the soles. 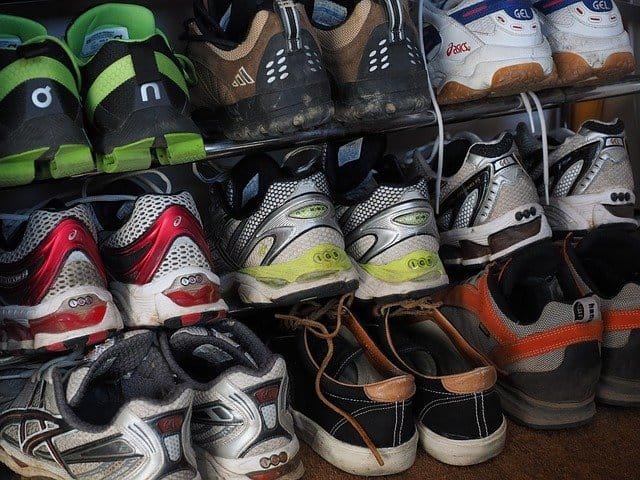 How do you track mileage on shoes?

The easiest way to do this is to keep a running log, even if it’s an old school, hand-written logbook. Just keep track of your runs and which running shoes you were wearing.

If you wear a GPS watch or bring your phone with you, most apps allow you tag a pair of shoes to each activity. This lets the app track mileage for you. 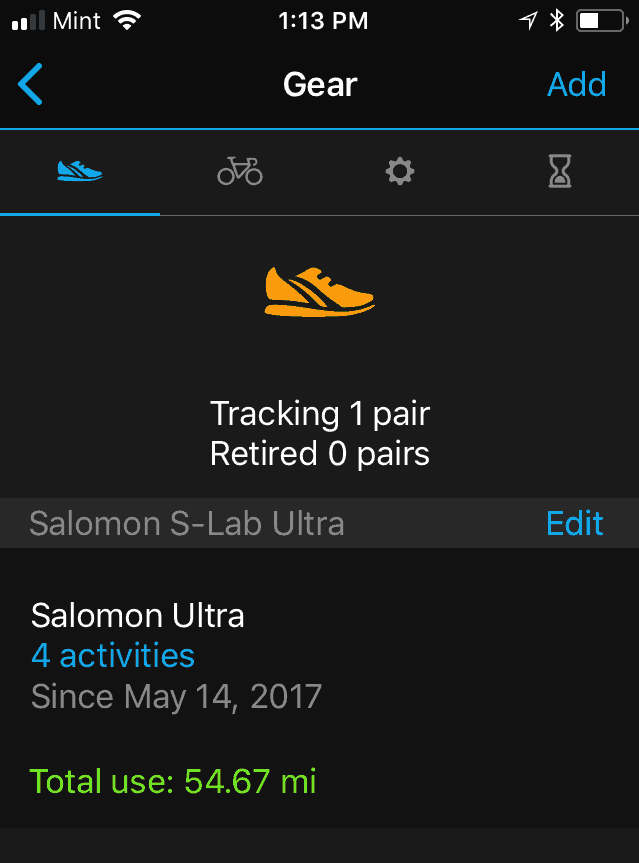 If you don’t want to keep a running log or don’t feel like updating Garmin Connect or Strava to remember the shoes you were wearing, you can also do some simple math to figure out mileage.

Just take the average number of miles you run a week and divide that into the amount of miles you think your shoes will need to be replaced. If you run 30 miles / week, and think you should replace your shoes around 400 miles. Then 400 / 30 = 13.33. So think about replacing your shoes 13 weeks after you bought them.

Pro tip: write the date you bought your shoes with a sharpie on the sole or the inside tongue of your shoe

What if you don’t know track many miles you run? Or don’t run consistently enough to do the math?

Do a physical inspection of your shoes every month or so and see if they should be replaced.

As described by Asics.com, when you check your running shoes, you should look for:

If your current shoes have any of these issues, it’s probably time to replace them with a new pair.

A final factor to consider is the type of shoe you run in.

The 300-500 mile replacement adage is true for most running shoes. But some types of shoes have shorter or longer lifespans.

A barefoot-style running shoe with minimal cushioning and support will last much longer than a standard running shoe. There is no foam or support that is built into the shoe to break down. These kinds of shoes will last as long as the sole on the bottom of the shoe has no holes or excessive wear.

But some lightweight running shoes like the Saucony Kinvara or Brooks Pureflow have less cushioning to reduce weight.

These shoes provide some cushioning and minimal support. But the cushioning they have tends to wear out faster than a standard running shoe. If you use this type of shoe, expect to get about 250-300 miles. 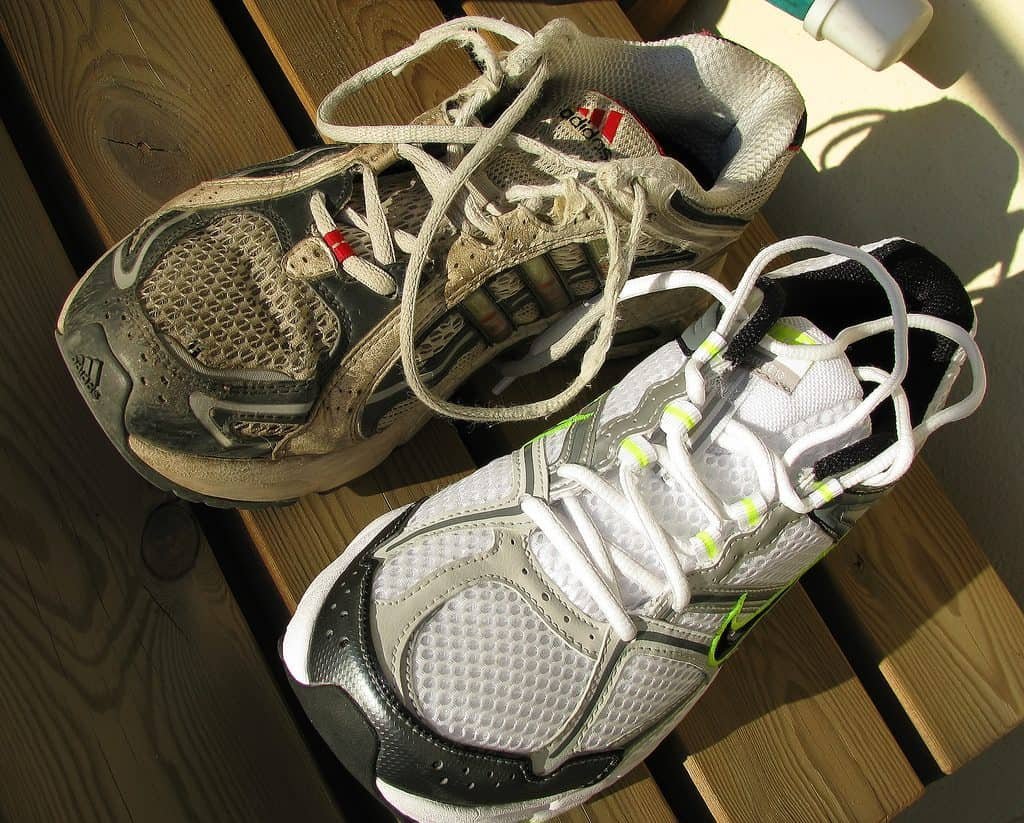 How important is it to replace my running shoes with a new pair?

Very! If there is one piece of gear you should replace on a regular basis, it’s your running shoes.

Not just because your running shoes become less comfortable the longer you run in them, but there is an increased risk of injury in running in old, worn out shoes.

Running shoes lose their cushioning as you put more miles on them. The foam in the midsoles gets compressed every time you go for a run. Within 24 hours or so, the foam returns back to its original state, ready to protect your feet again.

But as you run, the foam gets more compacted and, ever so slightly, loses some of its cushioning. It’s imperceptible on every run, but in the long term, the shoes lose their cushioning and their ability to protect your feet.

If you wear support or stability running shoes, it’s even more important to replace your running shoes regularly.

Stability shoes get their support from a piece of stiff, dense foam called the medial post. This is located in the midsole, near the arch and heel of a running shoe.

The idea of a stability shoe is that it keeps your feet from rolling inwards too much. But with a worn pair, the opposite happens. Your feet get pushed outwards.

This can result in potential injury as your feet, which should be corrected into a neutral gait, are now being forced outwards.

What happens if I don’t change my running shoes?

It’s still possible to run in worn running shoes and not get hurt or feel any noticeable difference.

A lot depends on your body structure, running gait, and how sensitive your feet are.

A worn shoe has no cushioning and little support. Off the bat, you won’t be as comfortable as when you first started running in them.

And because a worn running shoe has less cushioning and support, you lose much of the protection a running shoe provides. So you are more likely to suffer a running injury.

And if you have holes or tears in the upper, debris is more likely to get inside your shoe. Not a huge problem, but it can be an annoyance if you run in places with lots of dust, dirt, or pebbles.

Is there a way to prolong the life of my running shoes?

There are a couple things you can do to make your running shoes last longer.

The first is to buy a second pair of shoes and swap them every other run.

This allows more time for the foam in the shoe to return back to its original form. If you run every day, the foam doesn’t always have enough time to rebound from the compression it experienced during the last run. Taking it out for another run before the foam expands back will further compress it.

The second way to increase a running shoe’s life is to use an insert. The insert will absorb some of the pounding, preserving some life in the foam of the shoe. An insert has the added benefit of making a running shoe more comfortable and adding some extra arch support.