Pros And Cons Of A Protein Shake After Running

Do you drink protein shakes? Protein is known to be an important muscle-building nutrient when used with resistance training, but is it effective to use after a run?

Most people know that protein is one of the big three essential nutrients we need to eat (the others being carbohydrates and fat).

And protein is just as important for runners as it is for weight lifters, as long as you’re getting the right amount and from high-quality sources.

Let’s look at the pros and cons of a protein shake after running. Here’s what we know. 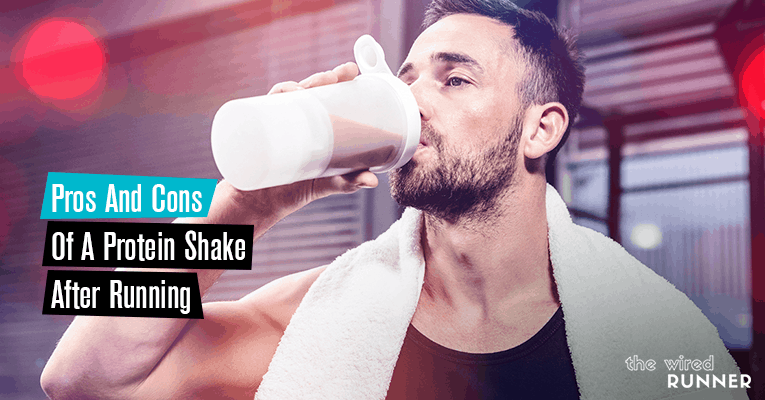 Protein is a compound that is found throughout the body. Contrary to what most people believe, it’s not only found in muscle.

It’s also present in hair, skin, bone, and internal organs. You may be surprised to learn that there are more than 10,000 different proteins in the body!

Proteins are made up of more than 20 small “building blocks” known as amino acids. Different proteins are formed by amino acids bonding together in different sequences.

Many of these amino acids are produced naturally in the body, but 9 of them—valine, histidine, lysine, methionine, tryptophan, phenylalanine, threonine, isoleucine, and leucine—are only found in the food we ingest.

These proteins are being repaired continuously throughout the body in a process called protein synthesis. For this process to occur, the body must have a constant supply of amino acids, both from the body and from our food.

There are many benefits to drinking protein shakes as long as they’re part of a healthy, balanced diet.

Muscle growth is perhaps the most well-known benefit of using protein shakes.

But what most people don’t realize is that it’s not the shake itself that increases muscle mass. Consuming more protein will help with protein synthesis in the body. But it will only help you gain muscle if it’s used together with resistance training.

Consuming a protein shake after running can help to build muscle in the legs and core.

But if muscle building is your goal, you should incorporate resistance training—bodyweight exercises or weight lifting—into your exercise routine.

Protein is necessary for cell repair, in all organs and muscles of the body.

After exercise, your body needs to rest in order to allow it to recover. It’s almost impossible to avoid consuming protein, so even if you don’t use protein shakes, the protein that you ingest in vegetables, grains, and other food will help to speed up recovery.

But sometimes the protein we’re getting in our food isn’t quite enough to repair cells quickly.

That’s where a protein shake can come in handy. When ingesting the right amount of protein for their body, recovery happens faster and more effectively.

Due to protein serving so many useful purposes in the body, consuming the right amount of it can improve general fitness levels.

This leads to improved cardiovascular performance, as well as an increase in strength thanks to more muscle mass.

It can sometimes be difficult to consume the right amount of protein during a busy day. Instead of trying to fit in a steak for lunch, it can be convenient and easy to just have a protein shake.

They can be taken with you to work, to the gym and can be bought at almost any fitness or sports store and some general stores.

One of the little-known effects of protein is that it makes you feel satiated and reduces food cravings. 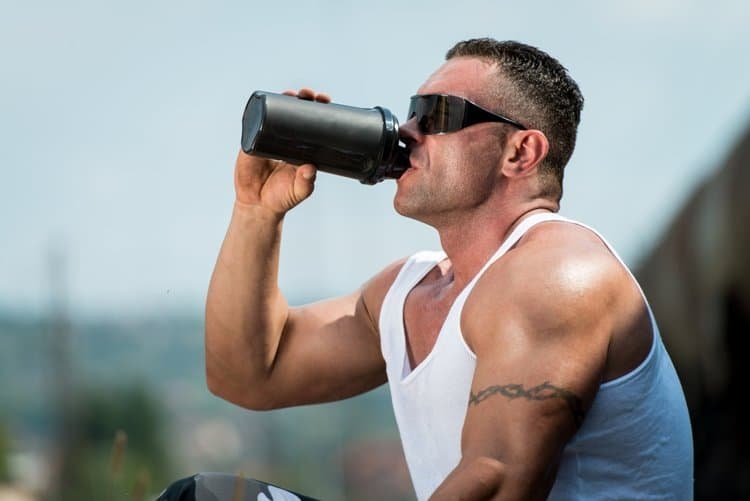 Also, because protein can build muscle when used correctly and together with resistance exercise.

And because more muscle helps to accelerate fat loss, protein shakes can be an invaluable tool in your weight loss arsenal.

As you get older, maintaining muscle mass and ingesting the appropriate amount of protein can become more difficult, especially as appetite decreases.

A protein shake can be a helpful way of keeping your protein intake up.

Protein shakes aren’t totally ideal. Let’s cover some reasons why you might want to avoid them.

It’s entirely possible to get enough protein in a normal diet.

Protein powder—which protein shakes are made of—doesn’t contain all the other nutrients that are found in whole food protein sources.

If you aren’t getting a large portion of their protein from powders, they are most likely missing out on certain nutrients in their diet.

In some cases, the only way to consume protein powder without it tasting bad is to mix it with other foods.

But this means adding extra calories to your diet, so if you are aiming to lose weight, it may not be the optimal choice.

When Should You Consume Protein?

Is there a right or a wrong time to consume protein? Not necessarily, but these tips may help you to choose the right time for you.

1. The “Magic Window” is Longer Than You Think

You should consume some protein after your workout. But while it does have benefits, there’s no need to rush to ingest it for fear of missing the “magic protein window.”

Protein synthesis continues for a long time after exercise. While it’s a good idea to have some protein soon after a workout, it’s nothing to panic about if you have to wait an hour or so before eating.

There’s no need to have a protein shake right at hand to consume immediately after your workout ends. You’ll have more than enough time to shower and get home from the gym so you can have a proper meal rather than a shake.

There’s also no need to consume a huge amount of protein after working out.

Your protein intake should be spread over the day. The body can only absorb so much protein in one sitting.

3. Eating Before a Workout Works Too

If it suits you better, you can also have a protein-rich meal before a workout and reap the benefits of the protein you’ve consumed.

Make sure it’s at least an hour before your workout so that you aren’t training on a full stomach.

Why Do Runners Need Protein?

The biggest reason for runners to make sure they’re consuming enough protein is mainly for recovery purposes. Protein will help runners to build more muscle in their legs. But ultimately, it will allow the body to recover faster. 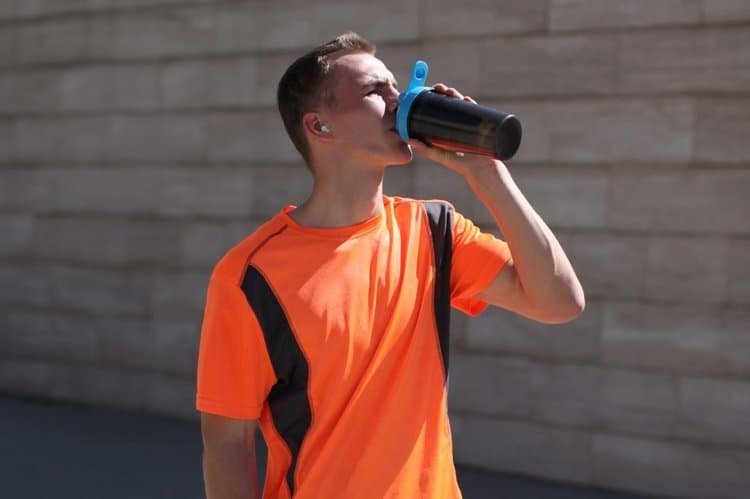 While the body does create its own protein, it doesn’t produce enough to repair the damage done to muscles and other cells when we exercise. This is why it’s necessary for runners to ensure that they take in enough protein especially after a run.

If we didn’t consume protein, the body would take a very long time to rejuvenate and we would easily fatigue. It would be difficult to reach a state of complete recovery.

Why is a Protein Shake Useful for Runners?

For those who need a quick, easy option that can be consumed in the gym, in the car, in the office, or while outdoors, a protein powder is a good choice. You can take the powder with you and mix it after your workout, or pre-mix their protein shake and drink it after exercising.

Those who struggle to ingest enough protein with whole foods may find that protein shakes help to increase their protein intake without adding too many empty calories.

What are the Different Protein Powders on the Market?

Not all protein powders are the same. Each one is created from something different and each one has its own advantage.

Casein protein is made from the insoluble part of milk.

It’s a slow-release protein, taking longer to be absorbed into the body than other types. This means it could also keep you feeling fuller for longer.

Whey protein is by far the most easily available and most widely bought type of protein powder.

Whey is the soluble by-product of the process of making cheese. It’s absorbed into the body quite a bit faster than casein.

Pea protein is an excellent choice for vegetarians and vegans. It’s also lactose-free so it’s suitable for those who are lactose-intolerant.

This type of protein is also extremely well-rounded, as it contains all 9 of the essential amino acids that we need to get in our food.

Brown rice protein is a good source of fiber as well as protein. It digests slower than whey protein, but it’s another good vegan or vegetarian option.

Spirulina is not really a protein powder but it’s often used as a supplement instead. It also contains all 9 of the amino acids we need and it absorbs extremely quickly in the body.

Most studies on the subject are based on 1 to 5 grams of spirulina per day. Even though it consists of 60 to 70 percent of protein by dry weight, this is a much smaller amount than the other protein powders provide.

How Much is Enough?

The amount of protein you should eat depends on their weight and their activity levels, although it is recommended not to ingest more than 30 grams in one sitting.

In the fitness world, it’s generally accepted that 0.6 to 0.8 grams of protein per pound is optimal for those who are looking to build muscle.

Individuals who want to lose fat should aim for 1 to 1.2 grams of protein per pound of body weight while in a caloric deficit.

This will not only build or preserve muscle, but it will also keep you feeling fuller for longer, making it easier to be disciplined with diet.

How Meditation Can Help Improve Your Running

When and How Often Should You Use a Massage Gun?