As runners, it’s something we all know, but don’t always execute: proper running form. If you want to get serious about improving your running form, this article is for you.

We’ll cover everything about running form, including how to have better form, why it’s important, some tips for practicing, and how to avoid injury.

To be the best runner you can be, you have to make sure your running form is up to par. Read on to find out how… 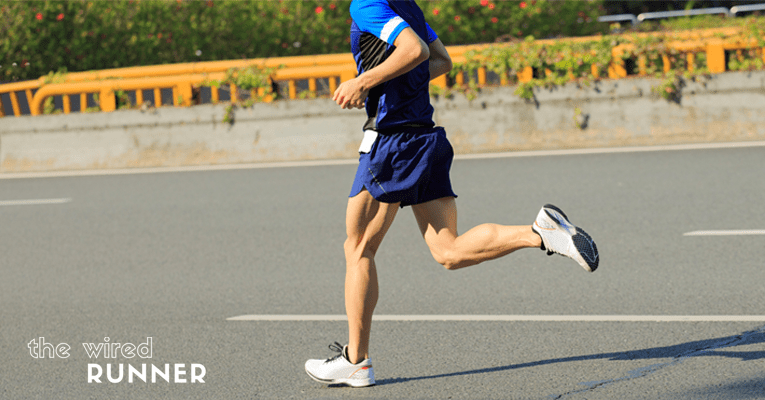 Are You Making These Running Form Mistakes?

If you’re not sure if your running form is correct, ask yourself these questions:

If you answered yes to any of these questions, then you can level up in your running form.

Before we get into the nitty-gritty of form, let’s talk about why it matters. If you run more efficiently with good form, you save a lot of energy, which you can put into adding speed to your runs or even lengthening them.

In addition, conventional wisdom dictates that good running form helps you avoid injuries. When you’re landing where you’re supposed to, then you have a decreased likelihood of getting injured.

(This has been debated among running experts, but for now the general belief is that better form reduces the chance of injury)

Proper running form also just looks good. If you’re about to run a race, you’d probably prefer that your family and friends take pictures of you running across the finish line with impeccable form rather than hunched over or swinging your arms like you’re punching yourself in the chest!

What are the Basics of Good Running Form?

For a brief summary, good running form means a good body placement: keep your head over shoulders, shoulders over hips, hips over the midfoot upon landing, and arms swinging directly ahead.

When you run with good form, you use less energy to run faster. But let’s break it down step-by-step (literally).

First, you want to land underneath your body with short, quick strides ideally around 170 per minute. Don’t overstride. Instead, focus on having a fast, but consistent turnover.

Look Ahead and Stand Straight

Next, you’ll want an open chest with a straight, yet relaxed upper body. Your chin should be up—not looking down at your feet—and your head should be relaxed with your gaze straight forward, not off to the side.

You don’t want to land on your heel and thus heel strike. Rather you want a stride that allows your feet to land midfoot. Focus on the backswing of your leg with your shin parallel to the floor.

Think of a Puppet

You want to stand nice and tall when you run and don’t lower your hips too much. Your shoulders should be relaxed, but you want to avoid shrugging. Think of yourself as a puppet that is being held taute by a string. They don’t shrug. 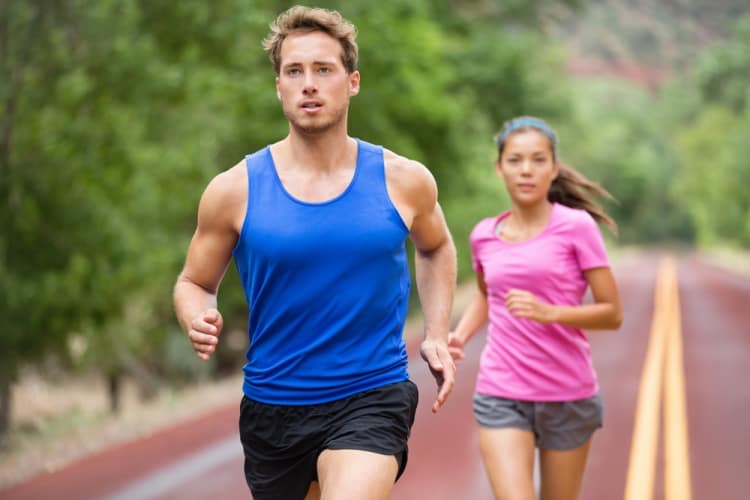 When I get near the end of a long run, I’m starting to get tired, and I find myself slouching, I remember shoulders out and start to stand tall once again. For me, reminding myself to put my shoulders out is enough to get into proper form again.

That being said, you don’t want to make your shoulders too tense. I tend to put my shoulders out and then remember that I’m not standing at attention in the military and therefore can relax them just slightly.

Make sure that your arms are swinging straight forward. You want an efficient arm swing that does not cross your body. Think front-to-back, rather than side-to-side. Try to keep your arms at your side at a 90-degree angle.

It’s easy to start clenching your fist, so make sure to loosen your hand grip. Imagine yourself holding potato chips (or an egg) and avoid tightening your hands into fists.

Instead, keep your hands relaxed and at your waist. If you find it helpful, you could always hold a real chip or egg!

Keep your knee in line with the middle of your foot. When your foot strikes the ground, it should be right under your knee. Make sure that you don’t bounce.

Rather, to paraphrase Teddy Roosevelt slightly, run softly and carry a big stick. People shouldn’t hear you coming from a mile away.

Finally, make sure that your feet have neutral pronation. You don’t want them to roll inward or outward significantly.

Instead, keep them neutral, rolling your feet inward even so slightly. This is hard to do if you naturally overpronate – common for runners with flat feet.

It will probably help to use a running shoe with a 4mm or less heel-to-toe drop. These shoes make heel-striking less comfortable and in-turn easier to land on your mid- or forefoot.

How Do You Get a Good Running Form?

Okay, you might be saying. I now know (or have been refreshed) on what good running form looks like, but how do I make it happen for me?

First, as the old saying goes, practice makes perfect. If you want to get better at your form, you have to practice often.

Make it a habit of going through all the motions/movements in a sort of checklist at the beginning of your runs when you’re still focused. Ideally, you’ll have someone there—hopefully a running coach—to check you, especially those first couple times.

Then to motivate yourself to make good running form a habit, you might consider starting a streak of running at least a mile a day in which you intentionally practice your running form.

Go through your checklist at the beginning, middle, and end just to make sure you’re keeping it up.

Another way you might consider practicing proper running form is by watching people execute it on a YouTube video like this one. You can do this on rainy days and then start to visualize what proper running would look like for you.

While seeing someone else use proper running form is a great way to get the idea in your head, the only way you can really apply it is by doing it yourself and putting it into muscle memory, hence the importance of practicing.

What is the Most Important Part?

In reality, all of it is important in making sure that you’re executing proper running form. That being said, a good place to focus is the landing.

You want to make sure that you’re hitting the ground without overpronation or underpronation and that you aren’t hitting too hard.

However, while it’s good to focus on the landing, make sure that you don’t hyperfocus to the exclusion of all the other different movements that are crucial to run efficiently. You may even want to break it down by run and have one component that you focus on per run.

What are Some Extra Tips for Energy-Efficient Running?

Once you’ve started to improve in your running form, you can start thinking about additional ways to up your running game.

Breathing is one of them. When you inhale, do so relaxed and through your nose and then exhale through your mouth.

You want to avoid breathing too fast, which can lead to side stitches. Make sure that you aren’t always exhaling when you land on the same foot, so try to think in counts of odd numbers like 3 rather than even numbers like 2.

That being said, there is no clear rule for breathing as long as you are relaxed. Make sure that your breaths are nice and deep and aren’t shallow so that you get the oxygen that you need.

Also, avoid breathing so heavily that anyone can hear you coming. You might be overdoing it if that’s how you have to breathe during a run.

Finally, although this may seem ironic, running is actually a lot more mental than people realize. Learn to let go and don’t overthink your movements. Try to keep things as natural as possible and trust your body’s instincts. It’s better to be relaxed and natural than forced and tense.

How Should I Handle Hill Running?

Shortening your stride and running more on your toes will help running up the hill feel easier. Also, don’t forget to pump your arms some too to get your upper body engaged.

Try to lean into the hill/incline just a little bit and focus on staying as consistent as possible as you push up the hill. Hill running is actually a great way to practice your running form because it’s a little easier to focus on it. 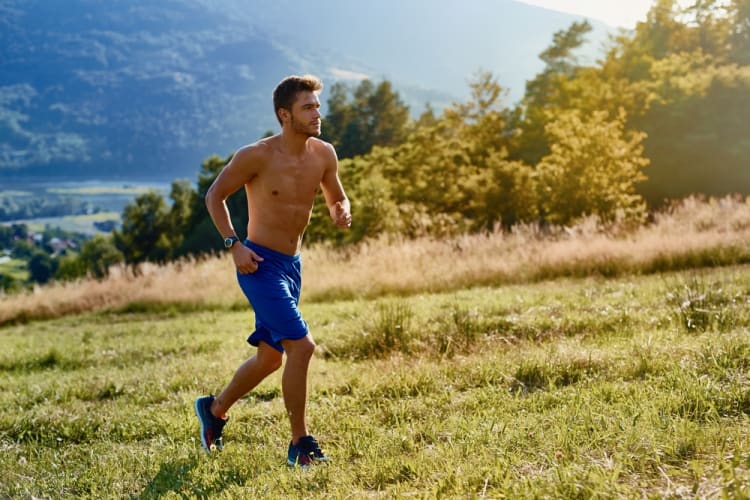 When you are on the downhill, just go with the flow, letting gravity bring you down to the base of the hill. Obviously, don’t go faster than you’re comfortable running, but you also don’t need to feel the need to put on the brakes either. This can put a lot of pressure on your knees.

Instead, you might even consider putting your arms and hands down at your sides and just relax and enjoy that downhill. Make sure that you keep breathing properly and that you aren’t overstriding. Just ride the wave!

What are Some Tips to Avoid Injury?

While having good running form is helpful in avoiding injuries, there are also several other things that you can do to help prevent injuries.

First, you should make sure that you’re mobile and flexible in your hips and ankles. This will reduce injuries in your lower back and knees.

If you’re just getting into running or if you recently decided to up your mileage, make sure to gradually increase the duration, frequency, and intensity of your runs. Build up your mileage and speed over time. It’s a marathon, not a sprint! Just remember that results take time.

Honestly, the best way to avoid injuries is to avoid overtraining and to give yourself plenty of variety. If you always do the same hard run every day, you won’t see improvements in your fitness and you might be a candidate for an overuse injury.

Finally, above all, make sure that you’re wearing appropriate running shoes. Honestly, you just need to find a shoe that’s comfortable and works for you. You’ll want to avoid shoes that are too cushioned and make sure that you replace your running shoes as needed. Low heel drop shoes are best, but not a requirement.

If the bottoms of your running shoes are starting to wear down or if you’re getting close to the recommended 300-500 miles, you’ll want to start looking for a new pair of running shoes. New shoes when needed will help keep you injury-free.

While it can be easy to forget what proper running form looks like, it’s important to get back to the basics if you want to improve as a runner. Making sure that you take the time to go through your running form checklist before it’s old hat is key to improving your form.

By following the tips that we’ve included in this article from imagining yourself holding an egg to standing tall to using shorter strides for hills, you’ll be able to become a runner with impeccable running form.

Best Fitbits for Runners in 2020

Best Base Layers for Running in 2020

Best Running Shoes For Cushioning in 2020

The Best Running Socks and Sleeves for Plantar Fasciitis in 2020