Home » Treadmill » ProForm Vs NordicTrack – Which Treadmill Brand is Better?

ProForm Vs NordicTrack – Which Treadmill Brand is Better?

A treadmill at home is a great investment and comes with many benefits. But with all the treadmill manufacturers and models, it can be overwhelming to choose a brand.

When you’re searching for a treadmill that’s high quality, durable, and has the features that will suit your needs, you’ll most certainly come across these two brands: NordicTrack and ProForm.

They are two of the more popular brands. While they have differences, they also share many similarities.

In this article, we’ll take a closer look at both of these treadmill powerhouses. 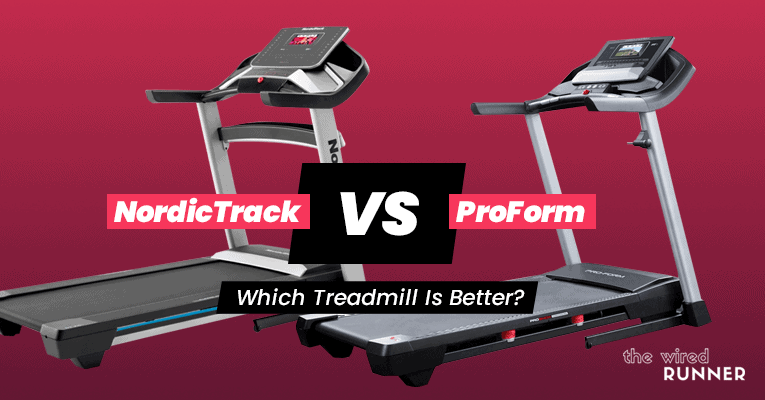 Both NordicTrack and ProForm are owned by the same parent company. They also happen to be one of the largest retail fitness companies in the United States: Icon Health and Fitness.

Before NordicTrack was owned by Icon, it was founded by Edward and Florence Pauls. Edward designed and built a ski machine in his garage so that he could train for the VJC cross-country ski race each day after work.

In 1975, Edward and Florence were already manufacturing the Flip Ski in their basement. These products were originally called “Nordic Jock.” They eventually changed the name of the company to NordicTrack when they realized that their ski machine was a great form of cardiovascular exercise.

From 1975 until 1986, Edward and Florence manufactured and sold the NordicTrack ski machine. In 1986, they were bought over by CML Corporation.

CML started manufacturing other exercise equipment alongside the NordicTrack ski machine. A quick expansion followed. Unfortunately, in 1998 CML Corporation filed for bankruptcy. Icon Health and Fitness acquired NordicTrack as part of the restructuring.

ProForm was founded in 1977 by two business students, Gary E. Stevenson and Scott Watterson. The company started as a trampoline manufacturer, but they expanded the range to include indoor rowers, treadmills, home gyms, and exercise bikes.

ProForm eventually was sold to Weider Health and Fitness, which was owned by Joseph Weider. Both Joseph and his brother Ben were bodybuilders and had a vested interest in the health and fitness industry. We have Joseph Weider to thank for the Mr and Ms Olympia competition, which is known to be the ultimate bodybuilding competition in the world.

In 1994, Weider sold ProForm and a couple other companies to IHF Capital Inc, a division of Bain Capital. The companies were renamed and formed Icon Health and Fitness.

While both NordicTrack and ProForm are owned by the same holding company—Icon Health and Fitness—and while both brands treadmills are manufactured on the same assembly line, they remain distinct brands.

Icon has turned NordicTrack Treadmills into their premium, high-end brand, while ProForm is the mid-range brand. The iFit app that both brands of treadmills come with is also owned by Icon.

NordicTrack also makes incline trainers, on which you can get a 40 percent incline or 6 percent decline.

ProForm manufactures strength training equipment like dumbells and benches, as well as resistance bands. You’ll find HIIT workout machines and the fitness mirror—with onscreen fitness instructions— are made by ProForm. 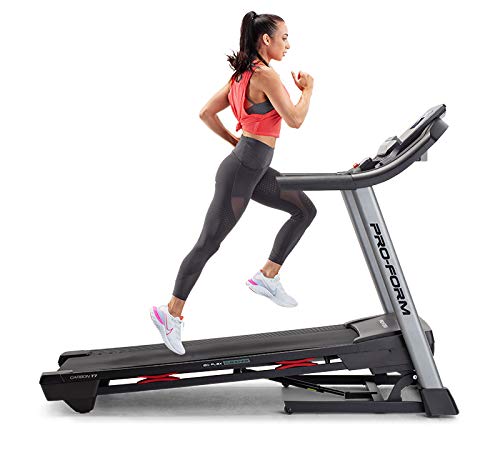 Depending on the treadmill model that you’re looking at, you’ll find that both brands have different sized motors. Whatever your fitness needs and levels, both brands will have a motor that will keep up with you.

While both brands of treadmills have deck cushioning, ProForm treadmills are better known for it.

ProForm is a mid-range treadmill, with prices from $ 2,000 for the Pro 9000 down to $ 599 for the Performance 400i. Depending on the treadmill that you’re looking at, you could have access to between 18 and 40 built-in programs.

Although NordicTrack and ProForm are owned by the same parent company, they are still two distinctively different brands.

Let’s compare the best-selling model of each brand: the NordicTrack EXP 7i and the ProForm Carbon T7.

Let’s have a look at each treadmill.

The NordicTrack EXP 7i has a larger deck, at 20 inches wide and 60 inches long. It features FlexSelect cushioning to help reduce the impact of footstrikes. It also features the Smart-Response Drive System, which is self-cooling and reduces the amount of vibration from the treadmill.

This also helps to mimic running on the road while reducing the amount of strain that’s placed on the body. 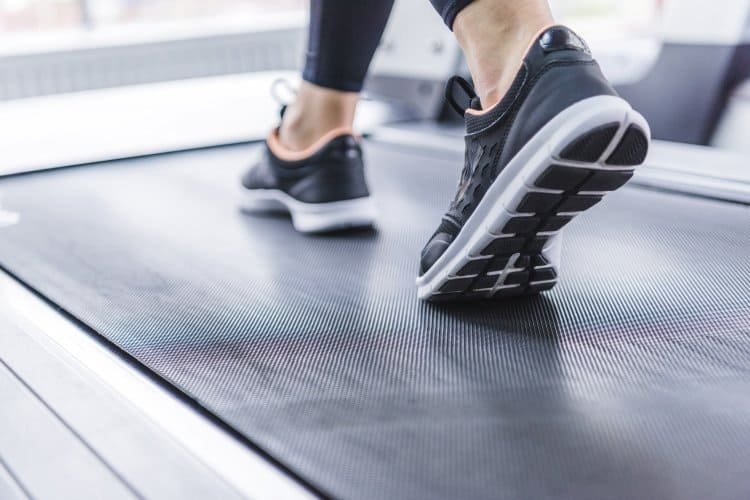 The ProForm Carbon T7 has a slightly smaller deck that’s 20 inches wide and 55 inches long. It also features ProShox cushioning, which helps to protect the joints by reducing the impact of one’s footstrikes.

When it comes to the motor, NordicTrack EXP 7i does have the more powerful motor at 3.0 CHP, which will allow a person to sprint, run, jog or walk without a decline in performance.

The Proform Carbon T7’s motor is a shade weaker 2.75 CHP. This is still plenty for walking and jogging. Advanced runners, however, might find that the motor doesn’t deliver the performance they need.

Both treadmills can reach a maximum speed of 12 miles per hour with an incline range of 0 to 12 percent.

Both treadmills feature a 7-inch HD Smart Touchscreen, which you can use for your iFit workouts. If you’re using the treadmill in manual mode, then the screen will display the time, calories burnt, distance, and heart rate.

Both treadmills have buttons below the screen that will allow you to increase the speed and incline while working out.

Both treadmills include a 1-year subscription to iFit. The automatic trainer controls the treadmill when you’re working out with one of the iFit training programs.

Neither the NordicTrack EXP 7i nor the Proform Carbon T7 comes with any built-in programs. If you’re using the manual mode of the treadmill, you’d need to create your own workout.

The NordicTrack EXP 7i comes with EasyLift Assist, which lets you easily fold and move the treadmill when necessary. Runners will love the AutoBreeze workout fan that helps keep you cool while you’re exercising.

ProForm uses SpaceSaver design that lets you fold the treadmill. When you’re ready to use it again, you simply release the deck and manually help it to the ground.

Both the NordicTrack EXP 7i and the Carbon T7 have handles with built-in EKG Grip Pulse sensors that allow you to check your heart rate in manual mode. Alternately, it can pull the information through to the iFit program that you’re doing.

They also have an accessory tray where you can put your phone or tablet without it interfering with the display screen.

Both treadmills are equipped with Bluetooth audio capabilities and a set of 2-inch speakers. An auxiliary port lets you plug in your smartphone and listen to your favorite songs while you exercise.

They also both require a Wifi or Internet connection, especially if you’re going to be using the iFit app. It’s important to note that these treadmills both have a weight capacity of 300 pounds. 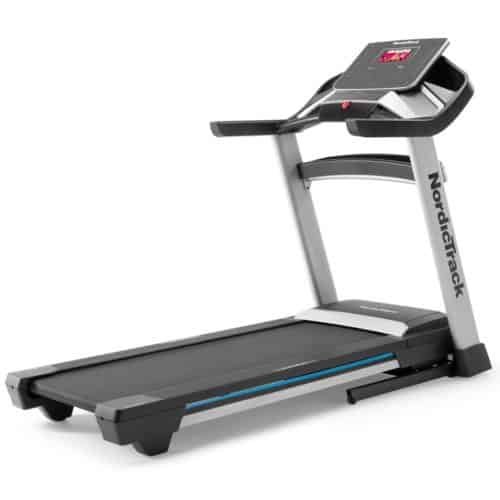 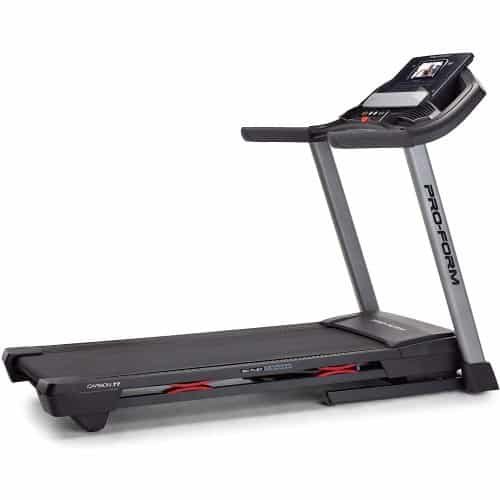