If you’ve ever been three-quarters of the way through a race and hit that wall, you should understand why electrolytes are so important.

Forget to pay attention to your electrolyte consumption, and you could end up with terrible cramps, nausea, or just an absolutely flat feeling (also known as bonking).

If you’re already using an electrolyte supplement like tablets, powders, or drinks, you’re on the right track.

But there’s another potential danger. What if you take too much? Can you overdose on electrolytes?

Here’s what we know and how to make sure you’re getting the right amount. 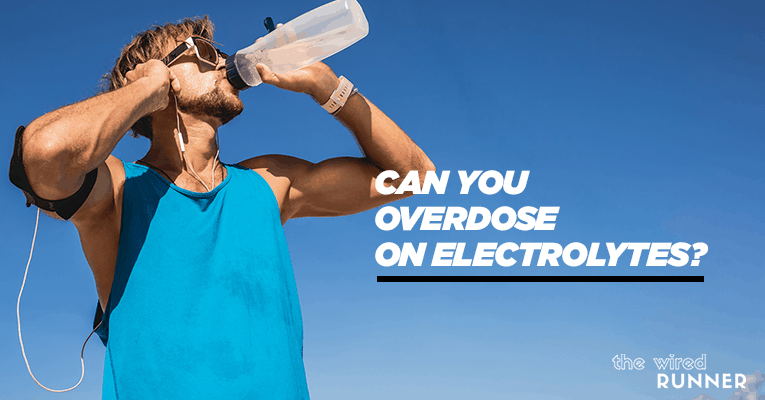 Electrolytes are minerals that are present in your body fluids. The main ones are sodium, potassium, magnesium, calcium, phosphate, chloride, and bicarbonate.

Their main feature is that they’re soluble, and when mixed with water, they help to conduct electricity. This may sound weird, but it’s essential for the body to work efficiently.

We consume electrolytes in every food we eat and everything we drink. The body manages them fairly well, but in some cases (mostly when you’re doing hard exercise), it needs help by way of an electrolyte supplement.

Why Does The Body Need Electrolytes?

Electrolytes are essential for many body processes. Deplete the body of electrolytes, and it suffers! Here are just a few of the functions electrolytes perform in the body.

One of the biggest functions of these minerals in the body is to balance the amount of fluid within the body.

In turn, this helps to move nutrients from cell to cell, as well as moving waste products out of the cells.

This process is crucial and helps the body to maintain its natural performance of things like digestion, cardiovascular function, and muscular movement.

How Many Electrolytes Should You Consume in a Day?

Typically, when you’re not running you can get all the necessary electrolytes from your food and drinks in a day.

There’s not much need to calculate your numbers here, as it’s usually more than enough to sustain you through your day without your body having any problems.

But if you’re running and need to make sure you replenish what you’re losing, it could be helpful to have a rough number.

Here’s what your recommended daily intakes are:

Typically, those over the age of 50 need less sodium and chloride than younger runners. Subtract 200mg (300 if you’re over 70) from those numbers.

Take note that people over the age of 50 do need more calcium to keep their bones strong. Around 1200mg is ideal.

What Can Cause an Electrolyte Imbalance?

The electrolyte levels in the body can be disrupted by a variety of things. Most commonly, we lose electrolytes through sweat.

This is a danger with runners, especially in long-distance races. The more sweat you lose, the more the water level in your body gets depleted.

Severe dehydration leads to a change in the water/electrolyte balance in the body, which can cause havoc. You also lose some electrolytes through sweat, which can make the problem worse.

On the other hand, if you’re ingesting too many electrolyte supplements or salt tablets while you’re on the road, you can go the other way.

Instead of your water levels going down, your electrolyte level goes up too much. This is just as much of a problem as a low water level and can have equally bad effects. 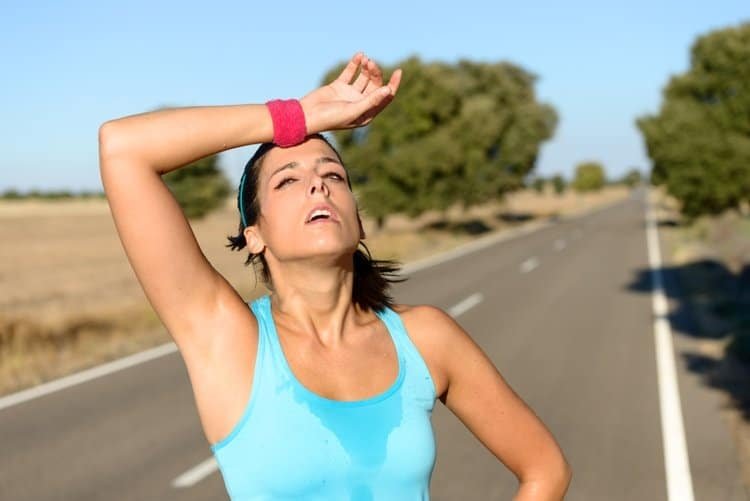 But electrolytes can become imbalanced even if you aren’t exercising. Vomiting and diarrhea also reduce the water level in the body, throwing your electrolyte balance out.

That’s why you often need a rehydration solution after a bout of illness. It’s not just to hydrate you, but they contain vital electrolytes to replace those lost during the illness.

These are the most common ways that an electrolyte imbalance happens in the body. Other, more serious causes, include cancer treatments, kidney disease, heart disease, and certain medications.

Signs of Too Much Sodium In the Body

Often, sodium is the electrolyte that causes the biggest problems. Because many foods (both processed and prepared at home) are cooked with a lot of salt, it can be super easy to overdose on sodium without even realizing it.

A sodium overdose can happen quickly. In just a matter of hours, your sodium level can increase significantly if you’ve been eating foods that are high in sodium and you haven’t been urinating enough (which eliminates excess sodium).

Signs of too much sodium in the body include dizziness, vomiting, diarrhea, unusual thirst, and a dislike or intolerance of any food that’s salty.

As salt begins to build up in the body, the body needs water to balance things out. Extreme thirst is often a telltale sign of too much sodium in the body.

Although it’s easy to accidentally take in too much sodium, when you’re running, the opposite is often true. A low blood sodium level is called hyponatremia.

Given that it’s easy to accidentally go both ways, it’s important to be aware of the electrolyte balance in your body and take steps to make sure you’re within normal parameters.

Signs of Too Much Potassium, Calcium or/and Magnesium

Sodium may be the most well-known and most problematic electrolyte, but the others are important too. If your potassium, magnesium, and calcium levels rise too much, you can have health issues too.

Excessive potassium levels are called hyperkalemia. Mild cases usually present no symptoms. But severe cases can cause arrythmias in the heartbeat, nausea, and even paralysis. Too much magnesium in the body can have the same effects.

High levels of calcium (hypercalcemia) can have dangerous effects such as excessive fatigue, weakness and lethargy, seizures, and pain in the bones and joints.

How to Avoid Ingesting Too Much

The easiest step to avoid ingesting too much sodium is to avoid processed, pre-cooked, or pre-packaged foods.

If you cook your own food, you know exactly how much salt goes into it. It’s much easier to control how much sodium you take in and stick to that 1500mg recommended total per day.

That doesn’t mean you need to eat bland food. Switch salt out for pepper, turmeric, cayenne pepper, or garlic spice. You’ll get less sodium in but your food will still be tasty. In fact, these spices also have anti-inflammatory properties. 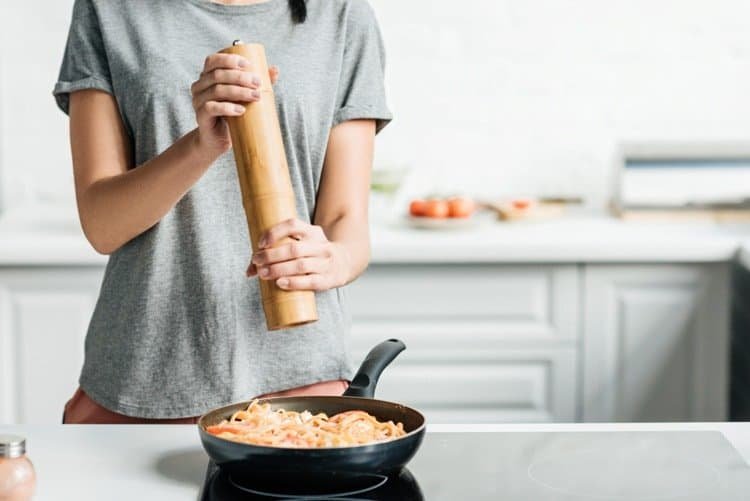 Secondly, up your water intake. Harvard Health suggests that the 4 to 6 cups per day rule is adequate for most healthy people. If you’re very active, though, you’ll most likely need to double that number.

Increasing your water intake will help to balance the water levels and electrolyte levels in your body.

Also, don’t use salt tablets, electrolyte supplements, or even energy chews if you don’t actually need to.

It’s a good idea to monitor your performance and your feelings closely while running. If you feel pretty good throughout your run, chances are you don’t need supplementation.

On the other hand, if you find yourself losing energy halfway through, especially on long races, there may be a need for supplementation.

Test out supplements on training runs before you do so in competitive races. You may need to experiment to find out just what the right dose is for you.

When to Use a Strong Sports Drink with Electrolytes

Sports electrolyte drinks are excellent nutritional supplements in certain circumstances. They definitely shouldn’t be used when they’re not needed, because they can contribute to an imbalance of electrolytes.

If you’re going to be doing a long or very intense bout of exercise, you can preload with an electrolyte drink. It works well for workouts in which you know you’ll be sweating a lot (for example, in hot weather), or when you won’t be able to drink during the workout.

If you can drink during your exercise, it may be worthwhile sipping on an electrolyte drink while you’re working out. For things like long-distance races where you’re constantly moving, you may opt for tablets or powers which you can quickly drop into your water bottle.

This helps you to maintain an adequate water/electrolyte balance throughout your race, keeping you healthy and energetic.

When you’ve been dehydrated during a race or exercise, drinking an electrolyte drink post-race can help you recover faster by replenishing the electrolytes you lost during your exercise.

What are Alternatives to Sports Drinks?

Electrolyte supplements are handy to have on long races if you need something to help you balance out those electrolytes.

These can be in the form of electrolyte-rich drinks, salt tablets, electrolyte tablets, or even energy gels and energy chews.

But to keep your electrolyte levels in check on a daily basis, it may be more worthwhile to simply eat a healthy diet that’s high in fruits and vegetables.

They’re loaded with electrolytes, low in calories, and also packed with vital antioxidants, fiber, and vitamins. Also, they’re generally much lower in sugar than electrolyte supplements and easy to fit into your daily meals.

How to Check Hydration Levels

Best Salt Tablets For Runners in 2022

8 Tips For Staying Hydrated While Running