Home » Shoes » Brooks » Mizuno Vs Brooks – Which Brand Is Right For You?

Mizuno Vs Brooks – Which Brand Is Right For You?

Wearing the right running shoes can be the biggest factor when it comes to having a good run vs. a bad run.

The shoe brand that is best for you is largely a personal matter. Aside from accounting for your stride, choosing the right shoe is a matter of what you like. Snug vs. roomy, low drop vs. standard drop, colorful vs. understated, big brand vs. underdog.

Today we’re looking at two popular, top-tier brands: Mizuno and Brooks. Both well-known running shoe brands. Mizuno is a Japanese shoe brand that was founded back in 1906. Brooks is not much younger, being started in 1914.

But neither of them began as a running shoe manufacturer. Mizuno was big in the baseball equipment arena, as well as other sporting equipment. Brooks made shoes for a variety of purposes.

Even though Carl Lewis set the 100-meter world record wearing Mizunos in 1991, Mizuno only really began gaining momentum in the running shoe industry in 2007, when they developed their Infinity Wave sole.

Brooks dedicated themselves to producing technical running shoes in 2001, cutting out all their other products as they teetered on the edge of bankruptcy. It was a good decision. Today, Brooks is the most popular running brand in the world, outselling even Nike and adidas.

Both shoe brands have a fairly limited number of models compared to other companies. Mizuno is known for their Wave Plate technology, while Brooks has a reputation for being a cushioned, well-fitting shoe.

Let’s get into the differences between the two brands so you can decide which might be better for you. 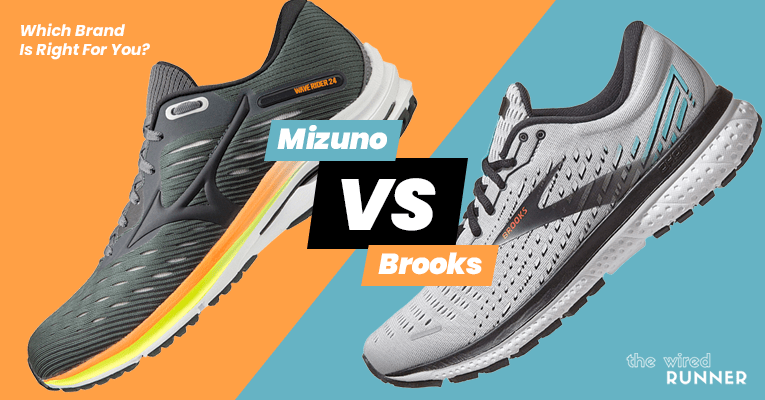 Mizuno uses AirMesh engineered mesh in their regular uppers, which is both lightweight and breathable.

You can also find options for most of Mizuno’s shoes in a Waveknit upper. This kind of upper has a tighter knit than the mesh, and fits more like a sock. It also incorporates overlays for added structural support.

The Waveknit uppers tend to fit better in the forefoot, hugging the foot comfortably and letting your toes flex without being restrictive.

But the engineered mesh is the more breathable of the two, as it has good-sized perforations that allow for effective ventilation through the shoe.

Their Dynamotion Fit Technology ensures that the shoe moves with your foot and supports it throughout the natural gait cycle. Mizuno shoes also feature a padded tongue and heel collar for extra comfort and support.

Brooks shoes have similar upper technologies. Their shoes either use breathable engineered mesh with larger perforations, or Fit Knit technology – a stretchy, sock-like upper that moves with the foot but may be less ventilated.

They also use 3D Fit Print technology, which helps to add structural stability to the upper by way of lightweight overlays.

Both shoes use traditional lacing systems that allow an individual to get a custom fit. You can also get Gore-Tex shoes, for added waterproofing, in both brands.

Mizuno is most well-known for their midsole, which features proprietary Wave Plate technology.

This is designed to disperse shock horizontally as you land, protecting your joints and foot bones. These are a variety of different Wave technologies, including Parallel Wave, Infinity Wave (two wave plates on top of one another), Cloud Wave, Fan-Shaped Wave and Double Fan-Shaped Wave.

The wave plate—or plates—sits within the midsole foam. They also use a few different foam types. One of the most common is U4ic—Euphoric—which is an EVA-based compound that delivers good cushion and energy return while being very lightweight. U4icX is the “lite” version, being softer, lighter, and yet just as responsive.

XPOP is another popular midsole compound. It’s made of compressed TPU pellets, which makes it highly durable but heavier and less responsive than U4ic. One of their latest is Mizuno Enerzy, which is soft, long-lasting, and very responsive.

Brooks is one of the most cushioned running shoe brands on the market, and they also make use of a range of midsole compounds. The softest and plushest of their midsole foams is DNA LOFT, a lightweight blended material that conforms to the runner’s foot.

BioMoGo DNA is similar to DNA LOFT, but it’s more responsive and also environmentally-friendly. For runners wanting superior energy return, DNA AMP foam consists of a heat-molded layer that returns the energy of your footstrike back to you for your toe-off.

Competitive racers will find DNA FLASH and DNA ZERO to be useful for speed work. FLASH is infused with nitrogen to offer springiness without the extra weight, and ZERO is Brooks’ lightest midsole offering.

Brooks also incorporates GuideRails technology in most of their stability shoes to add support and prevent overpronation. These are external overlays on either side of the midsole that offer stability. 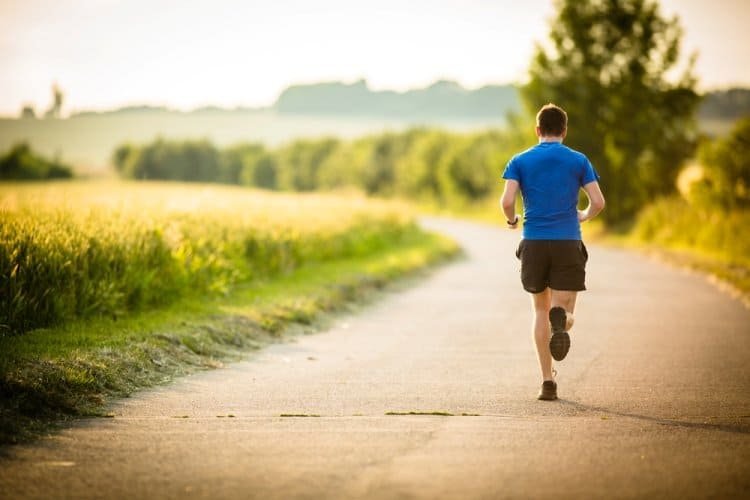 In a few of their stability shoes, they still use a Progressive Diagonal Rollbar, which is a tri-density midsole for a more traditional type of support.

Mizuno uses blown rubber in their outsoles, with a carbon rubber compound known as X10 on the high-wear areas.

It is extremely durable and offers exceptional grip on most surfaces. It’s not used in all of Mizuno’s shoes, but many of the latest models incorporate it.

They also add flex grooves (Dynamotion Groove or D-Flex Groove) to many of their shoes’ outsoles, for added flexibility and range of motion.

Brooks uses a full rubber outsole on their shoes, with some using HPR Plus, an anti-abrasive rubber compound. In some of their stability shoes, they use what they call a Dual Stability Arch Pod, which is designed to prevent overpronation without using a post.

Both brands are said to be able to handle 300 to 600 miles before the outsoles wear down and need to be replaced.

Although durability can be dependent on the user of the shoe, both Mizuno and Brooks shoes should last at least 500 miles before wearing out.

Brooks is known for their impressive cushioning. While Mizuno’s Wave Plate technology helps to ease impact, it can make the shoe feel a little more on the firm side.

Brooks’ range of EVA cushioning technologies allows the wearer to find something that suits their preference, with carrying degrees of softness. Brooks shoe models are typically considered to be more cushioned than Mizunos.

Mizuno shoes are considered to be narrow in comparison to others. This won’t be a problem for all runners, as the upper is generally stretchy, especially if you choose the Waveknit fabric. Some wearers may find that the engineered mesh upper is not as movable as the Waveknit, feeling slightly more restrictive.

Brooks is wider in fit than Mizuno, which makes it popular amongst a great many runners. It allows for a roomier toe box, and space within the shoe, while allowing the wearer to tighten the shoe as they will for comfort.

Brooks shoes are also the plusher of the two, from midsole to tongue to collar.

Both Brooks and Mizuno are comfortably light on the feet.

Mizuno running shoes are slightly more expensive than Brooks. As of the time of writing, Mizuno’s shoes range from $120 to $170 on their own website. Brooks’ shoes start at $100 and go up to $170.

The average shoe price for both brands is about $130.

In the Mizuno vs. Brooks debate, it’s hard to choose a clear winner. They’re both high-quality brands that have some great technologies, and when used properly they can help improve one’s performance.

Both brands offer neutral shoes and stability shoes, so whatever kind of foot you have, there should be an appropriate shoe for you. They are also both lightweight shoes, although the extra cushioning in the Brooks shoes makes them a little heavier than the Mizunos.

If you’re looking for plushness and cushion underfoot when you’re running, then a pair of Brooks running shoes would be our recommendation. You’ll feel like you’re running on clouds with every step, and your joints will be well-cushioned.

If you prefer a responsive shoe that has good energy return, the Mizuno may be the better choice. Their Wave Plate technology gives them extra springiness, and their lightness doesn’t hold you back. 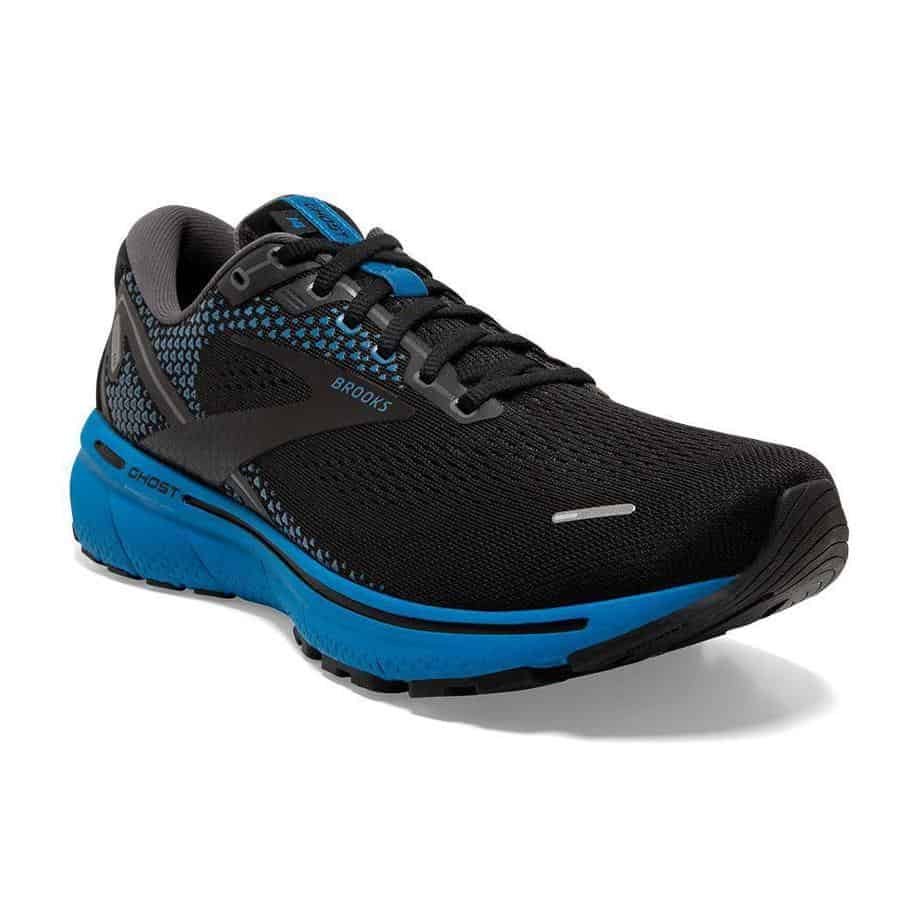 The Ghost 14 is a neutral shoe with a 12mm drop. It’s well-cushioned, and uses BioMoGo DNA and DNA LOFT foam to provide a good combination of plushness and energy return.

Runners who need a stability shoe to counter overpronation should look at the Adrenaline. Like the Ghost, it has a heel drop of 12mm and soft cushioning consisting of a mix of BioMoGo and DNA LOFT. The Adrenaline also incorporates GuideRails technology for extra stability. 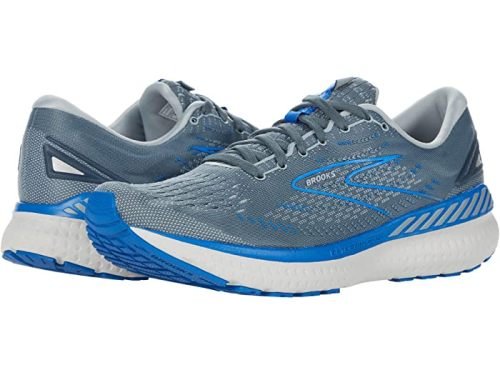 The Glycerin is one of Brooks most cushioned offerings. Its cushion level is at 3/3—which Brooks describes as being for runners wanting soft and protective cushioning.

It’s also a stability shoe, with a drop of 10mm and the inclusion of GuideRails technology for added support. 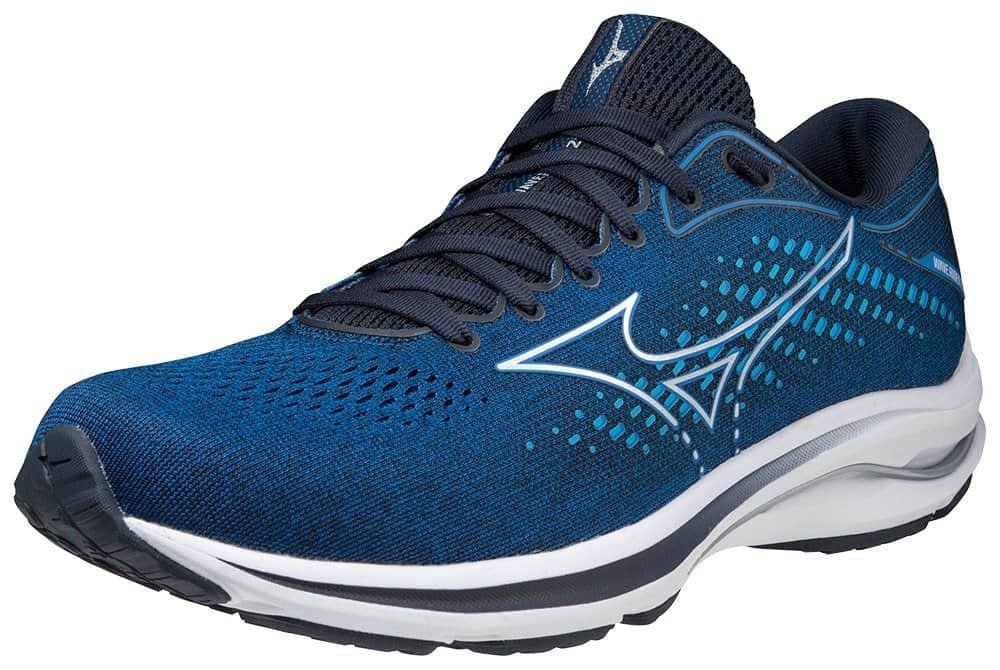 This is a neutral shoe that’s best suited for runners with high arches. It has a heel drop of 12mm, and uses Mizuno’s classic Wave Plate technology. It features Enerzy foam in the heel for great shock absorption and X10 carbon rubber to keep the outsole durable. 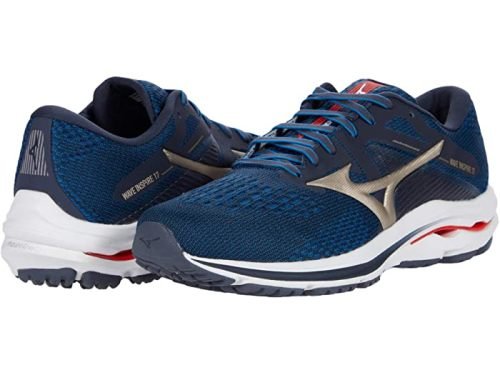 The Wave Inspire is one of Mizuno’s stability shoes. Instead of using a conventional medial post, Mizuno uses their Wave technology to provide extra support for overpronators. Enerzy cushioning sits below the Wave Plate, and U4ic sits below that. The plate may make the ride a little stiffer than what people are used to. 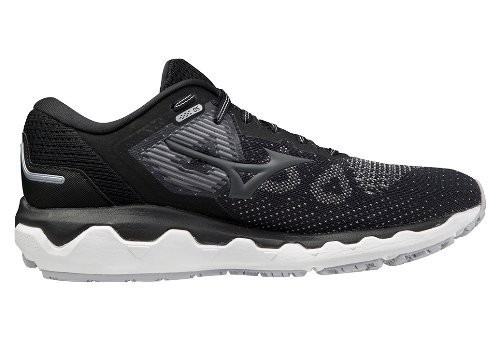 Another stability shoe, the Horizon 5 has some impressive cushioning wrapped around its Wave Plate. Your foot will be sitting on a layer of XPOP foam. Underneath that, there’s a bit of Enerzy and lastly, a layer of U4icX. Stability is added by wave-shaped foam sections.