The Magellan Echo is a new category of watch designed specifically for runners who train with their smartphone.

While there are a variety of pros and cons to using a smartphone in place of a standalone GPS watch, the biggest problem is the difficulty in viewing the smartphone screen mid-run. Most people carry their phone in an armband or pocket where it’s not easily accessible. The result is that most runners simply don’t look at the screen.

The Echo solves this problem.

See what others are saying about the Magellan Echo

It wirelessly pairs with your smartphone and displays fitness app data (time, distance, pace, and calories, for example) where it’s easily viewable on your wrist. The Echo has multiple screens that can be customized to display the exact data you want to see. To easily scroll between screens, simply tap on the watch face. 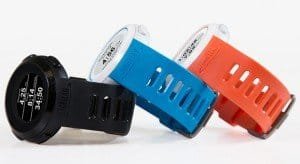 The Echo also acts as a smartphone remote control. Starting, stopping, pausing, laps – even controlling music – can be done on the Echo. Any alerts or notifications that appear on the fitness app will also appear on the Echo.

The Echo is lightweight and has a big, 1 inch, high-resolution screen. It comes with a standard coin watch battery, meaning no recharging is required — it’s always ready to go.

Beyond the requirement that you already own a smartphone, the downside to the Echo is that it’s only as good as the apps and smartphones it can support. At the moment, it works with newer versions of the iPhone (4S and above), as well as a select number of Android phones. It supports two Apps: Wahoo Fitness and Strava –but Magellan has promised increased compatibility for other apps in the near future.

PROS:
CONS:
WHO SHOULD BUY THIS WATCH

This watch is aimed squarely at runners and walkers currently using a smartphone while exercising. It’s best for anyone who wants to continue using their smartphone but needs the accessibility and ruggedness of a watch.

The Echo will display any data from a fitness app, including cycling information, making it fine for casual cyclists.

Syncs to smartphone via Bluetooth Smart

Nike React Miler vs. Nike Air Zoom Pegasus – Which Is Right for You?

Garmin Forerunner 55 vs. Forerunner 255 – Which Watch Is Right for You?