Home » Beginners » Is It Better To Eat Before Or After A Run?

Is It Better To Eat Before Or After A Run?

They always say that it’s good to let your food settle before going to work out, swimming in the pool, or going for a walk. But how much time do you need before going for a run? And is it just better to eat after a run?

In this article, we’ll answer those questions, discussing whether it’s better to eat something before or after a run, including covering what to eat and when to eat it. By the end, you’ll know what’s best for you regarding eating and running. 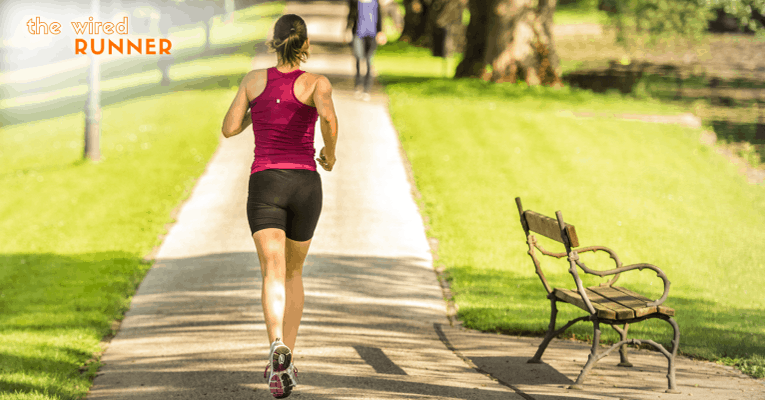 The TL;DR: It Depends

Ultimately, it depends on you. Preference varies from person to person, and it might take some experimenting to figure out what you prefer. If one option makes you sick or feel ill, then don’t do it.

The reason why the answer varies is because digestion time can vary greatly between individuals, ranging in time from two days to five days to complete the entire process. Obviously you’re not going to wait two days to run after eating. But knowing how your body deals with food and fluid intake the first few hours after a meal will guide your decision.

Time of day and length/intensity of your run will impact what you need to eat before and after. I personally prefer to have less food in my stomach because it feels more comfortable, and I don’t get side stitches. But that might be different for you.

Reasons to Eat Before You Run

The point of eating before a run is to fuel your body. Focus on easy-to-digest complex carbs.

If you’re going for runs in the morning, which is the best time to get a run in if you can, you’ll need fuel for your morning runs. Since you won’t have eaten for likely eight hours or more, it’s good to get a little something in your stomach.

You can run farther and faster if you’ve eaten food rather than running on an empty stomach. This is assuming that the food is easily digestible, because you’re getting energy and stabilizing your blood sugar. This is especially important to keep in mind for races. Even if it’s something small, make sure you get some fuel on race day morning.

Ideally, eat something 1-2 hours before you run so that your body has time to process the food and turn it into energy. If the portion is smaller, though, you might be able to get away with running closer to when you’ve eaten.

Finally, for some people, it might be essential to eat before a run. Maybe you’re someone who gets grouchy when you’re hungry and you want to enjoy your time outside. You could also experience things like feeling faint or being disoriented if you don’t have some food in your system.

Reasons to Eat After You Run

The reason to eat after a run is to kickstart recovery. Focus on a balance of protein, healthy fats, and complex carbs.

If you prefer to run in the afternoon or the evening, your body needs time to digest food. At least, if you want to avoid a heavy or full feeling while you’re running. Eating after you run can also help direct your energy toward your muscles, rather than toward digesting.

If you’re not going to go for a very long run in the evening (i.e., it will take you less than an hour), wait to eat dinner. You’ll already have fuel in your body. If you decide to go for a run too soon after eating, it is going to hurt.

You can eat a small snack before going for a run if you’re hungry, but again, it’s helpful to wait at least 1-2 hours before you dash out the door for a run. 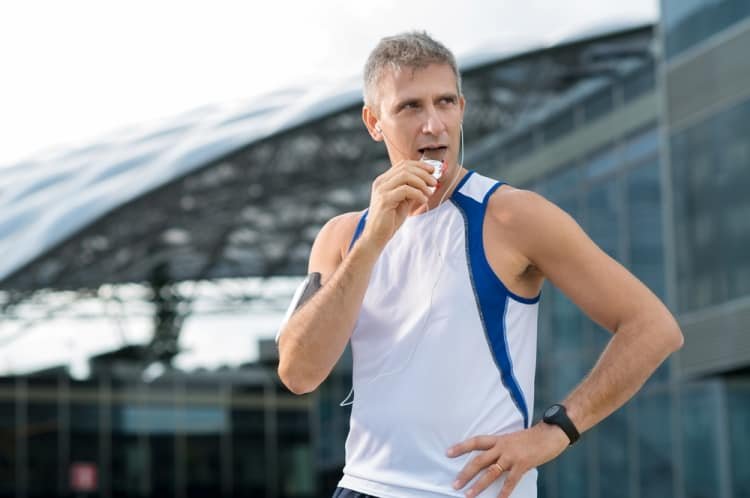 Most experts recommend waiting 2-4 hours before running after eating a large meal. If you’re trying to fit in a run and get it done at least two hours before you go to bed, this could be tricky. That’s why it’s ideal to run in the morning if possible.

Finally, some runners might struggle even with small snacks, which might make eating after you run the default option for you. If you don’t want to feel bloated, feel like your stomach is sloshing around, or deal with cramps, eat after you run.

What About Eating During a Run?

Whether or not you need to fuel up during your run all depends on the length. Longer runs will require fuel. Gels and other energy chews provide quick fuel and are easy to carry. Fruits, candy, and energy drinks also work.

You’ll have to figure out at what distance you start carrying fuel. A good rule of thumb is carrying fuel if you’re going to be running longer than an hour. One friend told me to carry one gel starting at 6 miles and add an additional one every 3 miles.

For example, that means that if I were running 9 miles, I’d take fuel at three miles and then again at six miles. This will give you the nutrition that you need without putting too much into your body.

But even gels can cause stomach problems, so test out different brands and varieties. Some gels contain caffeine, and for many runners those are even more likely to sit poorly. There are plenty of options to try.

What Portion Size Should I Consume?

While it might be that food, in general, is not helpful before a run, it might also come down to portion size. It’s a good idea to eat smaller portions before and after a run. A snack-size portion is good for before a run.

If you eat a larger portion of healthy food after a run, that’s okay if it’s part of a regular meal. Make sure, though, that you aren’t overdoing it on sugary and fatty stuff that isn’t good for you.

What Foods Are Good to Eat Before a Run?

If you’re going to eat before a run, pick something that is easy to digest. Some good options include a banana, energy bar, half of a bagel with peanut butter, oatmeal with fruit, or crackers. Bananas are personally my go-to.

What you are really looking for is complex carbs and maybe a little bit of protein. This combination will give you energy fairly quickly, but will also digest slowly to provide energy over a longer period of time. Don’t overdo it on the protein, though, as that can sit heavy in your stomach.

What Foods Are Good to Eat After a Run?

Just like you want to fuel your body before a run to make sure that you have the energy that you need, you’ll want to refuel after a run to assist in recovery, giving you the maximum benefits of your workout.

Again, opt for easily digestible foods with a balance of carbs, protein, and fats. Good options include protein shakes, yogurt with fruit, fresh vegetables with rice, and nuts, cheese, and crackers. 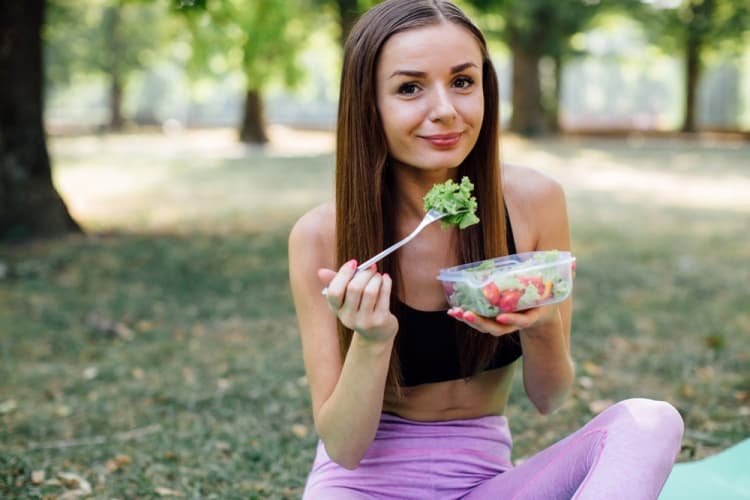 If you want something more substantive, opt for chicken, salmon, or tuna. If you’re craving fats, get some trail mix of dried fruits and nuts or eat an avocado. Quinoa, pasta, and dark, leafy greens are also excellent choices.

Some of the foods I’ve eaten after races are a chicken berry salad with hard-boiled eggs or salmon with asparagus over quinoa or rice. There are a variety of good recipes out there of meals that are great for runners that don’t take too long to prepare.

How Do I Avoid the Runner’s Trots?

Running and walking both are known to get your system moving. That’s great, until it derails your training run or race. You don’t want to have to stop mid-run to go to the bathroom. And you don’t want your mind on symptoms like diarrhea, gas, acid reflux, nausea, and cramping. Skipping high-fat foods is the easiest way to prevent mid-run stomach rumblings.

Of course, we know that many pork products and ice cream have lots of fat, but don’t forget these other culprits that might catch you by surprise: coconut (high in saturated fat), olive oil, blueberry muffins (they’re more like cake than a bread product), and some granola bars.

You’ll also want to limit caffeine (check your energy gels!) and dairy products. The reason why you’ll want to skip the cheese and yogurt before a run is that dairy products contain protein, and that is what many experts believe can contribute to the runner’s trots.

Hopefully, this article has given you a better understanding of how eating and running will work best for you. If you’re still not sure when to eat in relation to your run, answer these questions.

First, are you going for a short run, even if it’s a hard workour? If the answer is yes, you probably have enough energy stores to run without eating. This is definitely true for afternoon/evening runs, but you might need a little bit of fuel for morning runs.

Second, have you eaten a large meal? If the answer is yes, then it’s probably best to wait several hours before running, although 30-60 minutes is sufficient for smaller portions.

Finally, how soon do I eat after my run? You’ll want to eat within thirty minutes of finishing your run (and no more than two hours) in order to fuel your body back up again. Make sure to eat both carbs and protein, as this will help in recovery and enhance performance for your next run!

In the end, try different scenarios and see what works best for you. Keep track of what you’ve eaten before particular workouts (you can even put this on your Garmin watch) and see when you feel the best during a run, whether it’s before eating or after.

Tips On What To Eat Before A Triathlon

The Best Good Carbs For Runners