Home » Beginners » Hyponatremia And Running – What Is It And Should You Be Worried?

Hyponatremia And Running – What Is It And Should You Be Worried?

There is a common mantra in running: hydrate, hydrate, hydrate. Keep yourself topped up with fluids and your performance will improve. Keep drinking water, even when you’re not thirsty. Even our sports watches can nudge us to keep taking in water. This is not bad advice. But like any advice, when taken to an extreme, it has the potential to become dangerous. With drinking too much water, the danger is hyponatremia. We’ve all heard of hypothermia – a dangerously low body temperature. Hyponatremia – dangerously low levels of sodium in your blood – is far less known.

As runners, it’s important to stay healthy and have just the right amount of fluid and sodium in our systems. Too much water throws that balance off, and can result in low sodium. In this article, we’ll discuss hyponatremia in runners, covering everything that you need to know about it, including how to prevent it and put your worries aside. 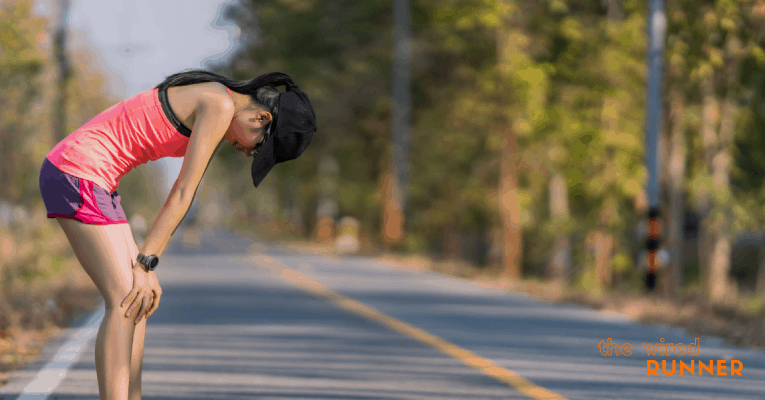 Hyponatremia means low blood sodium. It means you have too much water and not enough sodium in your body. Salt is essential to many body functions. Yes, too much sodium in your body is bad. Too little sodium is, arguably, more dangerous. You need the proper balance of water and sodium to stay healthy. It’s especially important when exercising.

Hyponatremia occurs when you have a salt deficiency. As runners know, having enough salt (and electrolytes) in your body is key to running well, so hyponatremia is definitely a big deal if it develops.

What Happens If You Develop Hyponatremia?

While it typically resolves itself within a couple days to weeks, hyponatremia will lead to symptoms like confusion, fatigue, headaches, and nausea, leaving you pretty uncomfortable. Although it’s not the same as dehydration, the symptoms can be fairly similar.

You might be more restless or irritable than usual, and you’re likely going to have less energy and be more drowsy. More serious symptoms include muscle weakness, spasms, or cramps, seizures, and even a coma.

Any of these serious symptoms warrant an immediate call to a medical professional. If it’s something less serious, you probably will be good just getting some more sodium into your system.

Extremely low sodium levels can lead to rapid and dangerous swelling of the brain, which can cause death.

While fatal hyponatremia is rare, it has occurred in long distance runners and military recruits. I knew someone who was training to join the military and who wanted to stay hydrated, but drank too much water, leading to low sodium levels and ultimately his death.

When Are Runners Likely to Develop Hyponatremia?

Typically hyponatremia occurs in runners when there is prolonged exercise. Extended time sweating leaches salt out of the system. As runners, we are trained to drink more water as we sweat more. If this is not done in a reasonable manner, and too much water is consumed too quickly, symptoms might develop. You’ve taken a body depleted of sodium, and flushed it with water, further lowering the blood sodium concentration.

Some studies found that over 30% of runners who participate in long distance events like marathons and ironman triathlons have experienced hyponatremia. That’s ⅓ of all the athletes tested, professionals included. You should definitely not rule yourself out if you participate in prolonged exercise.

What Types of Runners Are Most at Risk of Hyponatremia?

If you are a long distance runner, especially an ultramarathoner, you are more at risk of hyponatremia than shorter distance runners. Simply, you’re spending more time sweating and therefore losing salt. It’s therefore very important that you replenish those stores. Ultrarunners will actually eat salt tablets (or boiled potatoes dipped in salt) to prevent the condition. But a little bit of salt goes a long way. Don’t eat salt tablets like they’re trail mix.

Additionally, runners who may be more worried about becoming dehydrated and regularly drink more fluid (particularly without electrolytes) than they lose in sweat are also at a greater risk of hyponatremia.

If you are a slower runner, if you have a smaller body, or if you sweat a lot (especially a salty sweat), you are also a more likely candidate to suffer from hyponatremia. You spend more time sweating, you need less fluid to dilute sodium levels with a smaller body, and you’re losing more sweat (and therefore sodium), respectively. 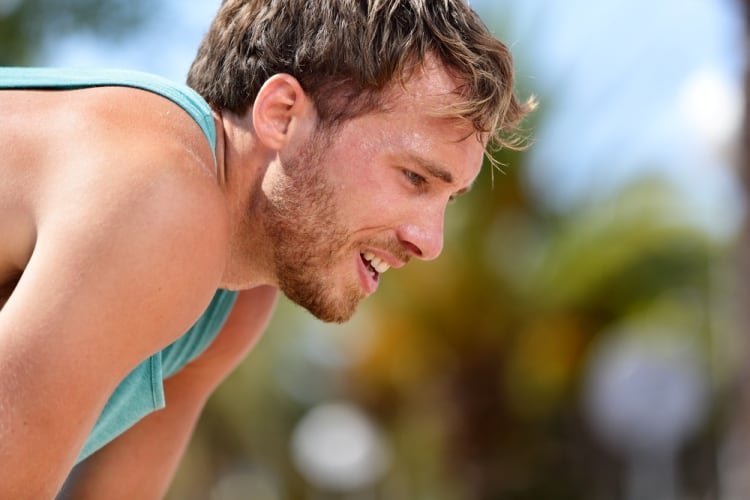 What Are Common Causes for Hyponatremia?

Unfortunately, hyponatremia can be caused by a wide variety of things, so depending on your physical condition and lifestyle, it could take some time to figure out what exactly is causing it.

Physical Changes in Your Body

If you have heart, kidney, or liver problems like congestive heart failure, fluids are more likely to accumulate in your body. As fluid levels go up, your sodium concentration will go down, because your blood gets diluted.

Similarly, if you experience hormonal changes due to adrenal gland insufficiency (Addison’s disease) or have low levels of thyroid hormone, you may be more likely to experience hyponatremia.

Dehydrating conditions like severe vomiting and diarrhea also cause your body to lose electrolytes, including sodium. Other diuretics such as alcohol also cause this. This is especially bad if it’s just before a run when you lose even more electrolytes through sweating.

While it’s definitely important to stay hydrated as a runner, you don’t want to go too much the other way and drink too much water. Again, this is not good if it’s just before a run because you’ll lose electrolytes without replenishing them.

Additionally, continuous sweating for five hours or more like you would experience in a marathon or ultramarathon can lead to hyponatremia if you’re not also making sure to replace the sodium that you’ve lost.

Some medications get in the way of maintaining a good balance between water and sodium. This includes water pills, which are used to get rid of excess salt in the body, and some antidepressants and pain meds.

How Do I Prevent Hyponatremia on Long Runs?

While hyponatremia is definitely something to be serious about, it is rare and easily preventable. Take a few of these common steps and you will have no problems.

If you’re dehydrated, your body will have lower sodium levels to begin with. That’s not good if you’re going on a long run. Make sure that you drink enough the day before going for a run, and in the hours leading up to your run.

But remember. Don’t overdo it! A good rule of thumb is to drink half of your body weight in fluid ounces per day. If you’re drinking way more than that, it’s too much. Also, your urine should be a light yellow, not necessarily super clear. If it’s really, really clear, you might be drinking too much.

Water is important to stay hydrated, but you also need electrolytes. These come from a well-balanced and healthy diet, but can also come from sports drinks. If you’re running a race, it’s okay if you take the water the majority of the time. Every few water stops, though, take the sports drink. That will give you the electrolytes (including sodium) you need. 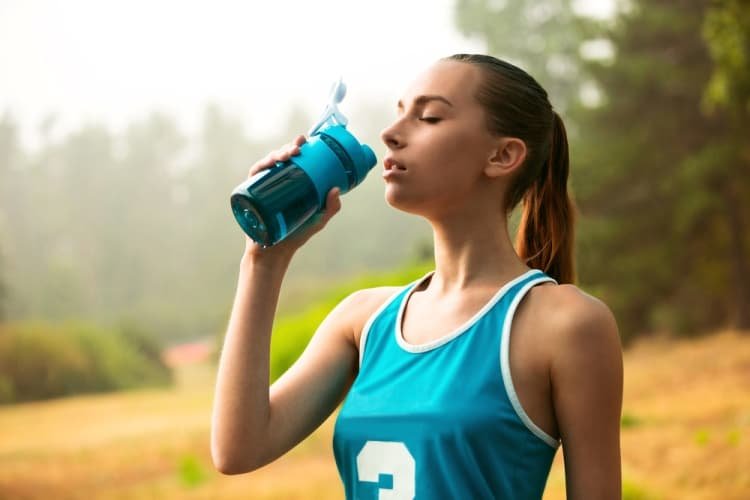 Ideally, you’ve thought ahead of time about your hydration plan. Some runners even like to carry two hydration bottles with them on long runs—one for water and one for a sports drink. Gels and energy chews also deliver plenty of electrolytes.

Don’t Force Yourself to Drink

If you’re forcing yourself to drink water when you’re not thirsty and you know you’re hydrated, then you’re likely putting too much fluid into your system. That will dilute your sodium levels.

If you’re not thirsty, don’t pressure yourself to drink a glass of water. Your body will tell you when it needs more fluid, so don’t stress.

As mentioned above, hyponatremia can be caused by drinking too much too quickly. Avoid chugging your water. The cups at race water stops contain, in general, an appropriate amount of water to stay hydrated during a race. If you drink think three cups and are running with your own water bottle to drink between stops, be careful. Instead, try to evenly space when you’re taking fluids throughout your run (and your day). Take sips, not gulps.

During longer races, salty snacks like pretzels are a common offering at water or aid stations. It’s a way for you to get some salt that you’ve lost into your system. And at the finish line, grab that bag of chips. A salty snacks after several hours of running tastes great exactly because your body is needing the salt replacement.

Figure Out Your Sweat Rate

Camelbak has a handy datasheet that you can use to convert the numbers into your specific sweat rate. That number lets you calculate how much fluid you should be drinking prior to, during, and after your runs.

It’s also important to remember that sweat rates can vary in different seasons and climates. It’s worthwhile to calculate a couple times every year to make sure that you’re still getting the fluid you need.

Hyponatremia is like hypothermia in that they are both serious issues that you want to avoid. Fortunately, making sure that your sodium and fluid levels stay balanced, especially if you’re a long distance runner, will ensure that you don’t have to deal with hyponatremia.

If you have a preexisting condition that makes you more likely to have low sodium levels, make sure that you see a doctor before starting a running program to ensure that you’re getting the sodium that you need to stay healthy and balanced.

The Best and Worst Exercises for Hip Pain