Home » Training » How Vaping Can Impact Your Running

How Vaping Can Impact Your Running

Do you vape? Perhaps you’ve recently made the switch to vaping from cigarette smoking, which is a step in the right direction.

But do you know how vaping can impact your running?

There are definite advantages to moving from cigarettes to a vape, but don’t assume that your performance will improve significantly.

Let’s have a look at vaping and how it can affect you and your running. 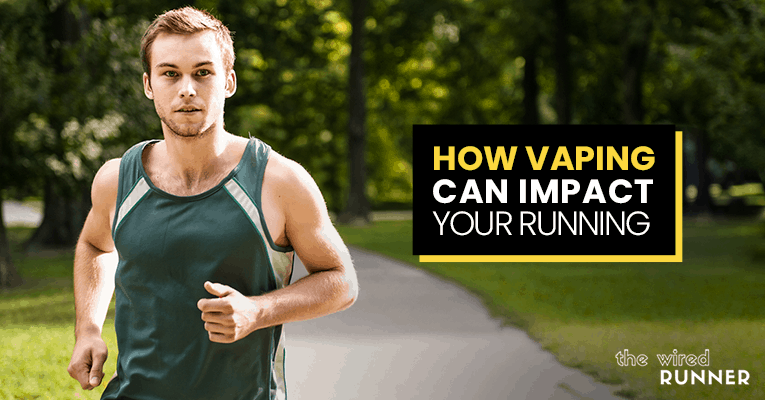 Why Is Vaping So Popular?

Vaping is a relatively new concept. It’s been cited as a healthier alternative to smoking, for a variety of reasons.

A 2016 study indicates that some of the reasons people vape rather than smoke include:

Ultimately, vaping has been promoted as a healthier way of getting your nicotine fix, although the jury is still out on that fact.

How Does Vaping Work and What Do You Inhale?

In the end, vaping works the same way as smoking, in that you inhale chemicals that give you that nicotine hit. Because vapes are electronic, they work slightly differently from normal cigarettes.

When you take a puff of your vape, the liquid within the cartridge gets heated up and turns into vapor. That’s what you end up inhaling into your lungs, as opposed to smoke.

The vapor contains chemicals like nicotine, THC in some cases, and a few others. Typically, these are healthier than normal cigarettes, but the problem comes from the additives in the cartridges.

The heating of the cartridges can cause unpleasant, unhealthy, or entirely dangerous chemicals to be released.

The other worry with vaping is taking vapor into your lungs. If you vape often, this could possibly lead to a build-up of water in the lungs, which can have adverse effects.

How is Running Performance Affected?

To understand this, we’ll need to have a good understanding of what happens in the body when smoking or vaping.

Now imagine if your lungs were compromised. This entire process is going to be much harder.

Unfortunately, inhaling chemicals into your lungs (whether from a cigarette or a vape) compromises your lungs.

This affects the lungs’ ability to deliver oxygen to the blood, which in turn means that your muscles and organs end up receiving less O2.

In running terms, this means that your muscles won’t be working optimally as they won’t be receiving as much oxygen as non-smokers’ muscles do. They may fatigue faster.

Nicotine also causes your heart rate to spike, as it’s a stimulant. So not only will you have compromised lungs, but your heart will also be beating faster and slightly softer. 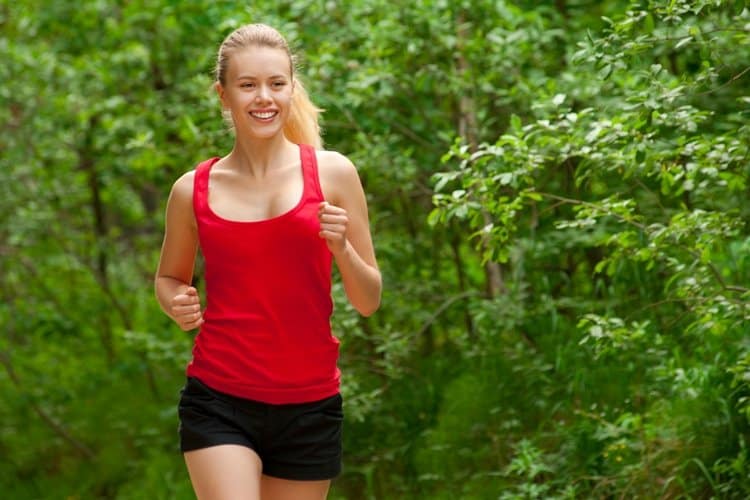 Elite athletes have a low resting heart rate, which allows them a wide window of performance before reaching their maximum heart rate. In smokers, this window is decreased thanks to an elevated heart rate.

Vaping and Running – Do They Fit Together?

You may have seen articles or social media posts claiming that vaping can actually improve running performance. There are a few studies that suggest that athletes performed better after vaping, but there are some points here worth looking at.

As mentioned, vaping has a specific effect on the body. When you run immediately after vaping, your lungs are still very compromised. So is your oxygen consumption and muscle efficiency.

If you wait a couple of hours after vaping, your baseline tends to go back to normal. It’s important to note that we aren’t sure if the athletes who took part in these studies were regular smokers/vapers or not.

On the other hand, there are studies (like this one) that point to vapers having a lower level of fitness than non-smokers.

But the truth is, there aren’t nearly enough studies out there on vaping for scientists to be able to make a proper statement on how it affects health.

It’s also worth noting that e-cigarette companies have been in trouble before for less-than-ethical business practices regarding studies about their products and their effects.

With this in mind, how can we even believe the information out there that’s saying vaping isn’t bad for you?

While it could be better than smoking cigarettes, the fact remains that vaping causes an increased resting heart rate, a decrease in blood oxygen levels, and an overall reduction in endurance.

At this point, we can only say that it appears that vaping isn’t a great idea for runners.

Changing from Tobacco to e-Cigarettes

While vaping is certainly not healthy for you, it may be healthier than regular cigarettes. Switching to vaping from normal cigarettes could give your cardiovascular system a bit of a break if you aren’t ingesting as much nicotine as you would be with a cigarette.

That said, not smoking at all is still better for you. Vaping may be healthier if you choose certain cartridges and specific flavors, but it’s still not the best idea to be inhaling vapor into your lungs.

But keep in mind that depending on how much you smoke, your general health, and what you fill your vape with, vaping could still be worse for you than cigarettes.

Cigarette smoking causes a variety of negative effects in the body. Keep in mind that these don’t necessarily make it worse than vaping, given the harmful effects of vaping we’ve already spoken about.

Here are just a few:

If you are a vaper, here are some potential positive impacts you may experience. 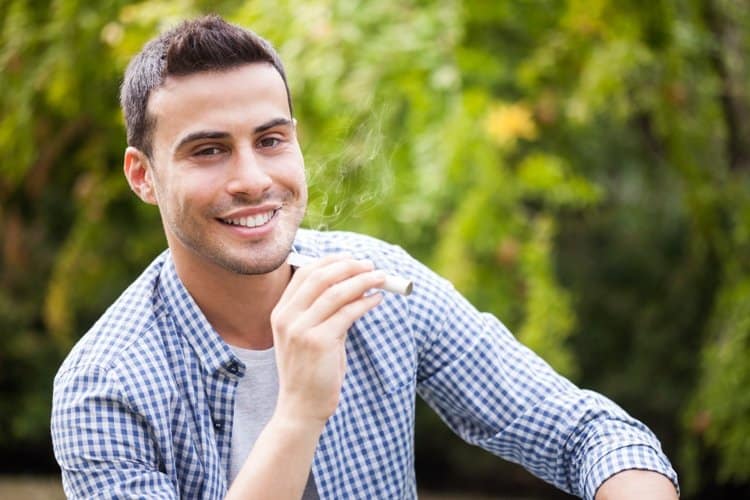 Keep in mind that these are in comparison to smokers, NOT people who don’t smoke or vape at all.

When compared to athletes who smoke regular cigarettes, vapers tend to have better cardio performance. It seems like cigarette smoking leads to shortness of breath much quicker than vaping does.

Some studies have suggested that athletes who vape can run for longer before experiencing shortness of breath, which also means running for longer before muscle fatigue sets in. Vapers also seem to have more capacity for heavy weightlifting than cigarette smokers do.

If you’ve switched from smoking cigarettes to vaping, you can expect an improvement in cardio performance.

But if you’ve recently become a vaper after not smoking at all, you should still expect a decline in your cardio performance (although not as much as if you chose cigarettes).

It’s likely that you’ll experience an energy boost if you’re using vaping liquids that contain nicotine. If you’re using flavors that are nicotine-free, you may not get this benefit.

Nicotine is a stimulant. It opens the blood vessels, allowing blood and oxygen to move through them faster to get to the organs and muscles. It also speeds up body processes like metabolism, generating energy faster than usual.

Keep in mind that although blood and O2 will be getting to your muscles quicker, there could be a reduction in oxygen levels as the lungs are compromised.

But in general, nicotine offers a nice little energy spike that could be beneficial when exercising.

If you’re a smoker of any kind, you’re well aware of the mood-boosting properties of inhaling these particular chemicals. On the flip side, being deprived of your smoke can lead to extreme grumpiness.

If the mood swings are the only thing keeping you smoking cigarettes, then it would be worth switching over to vaping. You’ll get the mood boost, but it’s slightly less unhealthy for you than cigarettes.

Another common side effect of smoking is keeping the weight down. Smokers who quit often complain of weight gain, which could be as a result of a large reduction in the amount of nicotine being consumed.

Nicotine stimulates metabolism, so when you’re no longer getting it regularly, your metabolism may slow down significantly. This can take some time to smooth out, so weight gain is to be expected when stopping.

Vaping, like cigarette smoking, can also keep cravings in check. This prevents overeating, and smoking is calorie-free!

But of course, there will always be negative effects that arise as a result of smoking, whether regular cigarettes or a vape.

Here’s what you may experience when vaping and taking part in athletic pursuits.

The degree of throat irritation you experience will depend on how often you smoke and how long before running or exercising you smoke.

The more you smoke, the more likely you are to experience irritation in the throat. When you run, you breathe harder, which can contribute to this discomfort and pain. 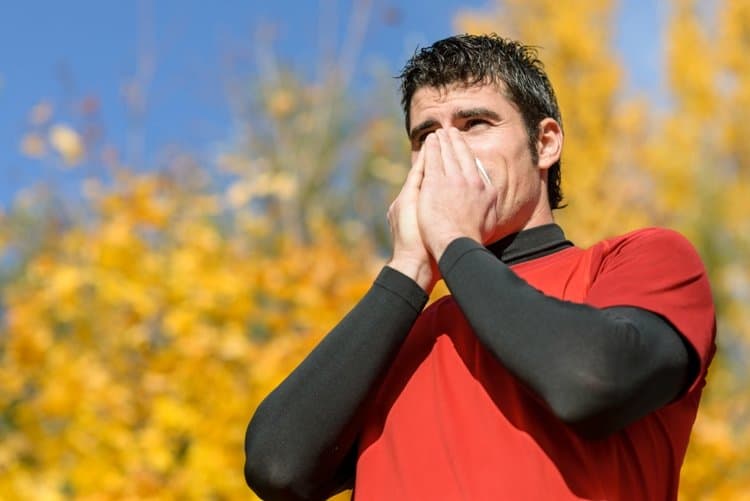 Running in cold weather is likely to exacerbate this problem even more.

Don’t think that just because you’re taking vapor into your body, it’s helping you hydrate! Not at all. The vapor from smoking ends up directly in your lungs. That’s not where your water goes when you drink!

Vaping can dry out the membranes in the mouth and throat. This leads to the irritation we mentioned above, but it can also contribute to dehydration.

You may need to drink more than usual if you’re a vaper. Whether or not you smoke, it’s wise to pay close attention to your hydration!

For many of us, smoking cigarettes or vaping is simply a habit. A hard-to-break habit, sure, but a habit nonetheless. The biggest problem with this is that there’s a very fine line between habit and addiction!

Like any drug, smoking regularly gets your body used to the feelings and effects that it causes in your body.

When you do decide to stop, you go through withdrawal symptoms. Usually, these are unpleasant and can make you feel quite terrible.

What often happens is that we end up falling straight back into the same habits to avoid experiencing these horrible symptoms.

That’s when the possibility of addiction is extremely high.

Being able to stop and wanting to stop are two different things. While smoking or vaping are not considered to be “dangerous” drugs, there’s still a very real possibility of addiction.

This makes it harder to stop when you do reach the point that you want to.

4. Effects on the Body

Even though vaping is considered to be healthier than cigarette smoking, it still has some negative effects on the body. Choosing vaping over smoking doesn’t actually mean you’re being healthy!

Inhaling chemical-laden vapor is never a great idea. Here are a few specific areas that are affected when you vape:

Your heart and blood are both affected by vaping. It’s been shown that vaping causes the heart rate to increase, which is a direct indication of your fitness level.

Because you’re taking in fluid as well as air, the oxygen levels in your blood decrease as there are fewer oxygen molecules to attach to red blood cells.

Obviously, you’re taking this vapor directly into your lungs. That vapor doesn’t just disappear into thin air, so it leaves you open to complications from fluid build-up in the lungs.

Your lungs will also be working extra hard to take in oxygen and get rid of carbon dioxide. When you exercise, you’re already putting a strain on your lungs, so if you’re vaping on top of that, they’re taking a bit of a beating.

While you won’t get that musty, stale smoke smell, you’re still taking chemical-laden vapor into your mouth, over your teeth and gums.

Although it may take a while for you to notice negative results, constant exposure to these chemicals can have a detrimental effect on your teeth and gums, leading to poor oral hygiene.

Some of the chemicals in your mouth and throat rebound to end up in your digestive system. They’re essentially a foreign substance that’s not meant to be there, so this can cause digestive issues like pain, an upset stomach, and potential long-term problems like stomach ulcers.