How To Fuel For Your First Half Marathon

As someone who just ran her first half marathon in May, I know how much time I spent talking to friends and reading articles about fueling properly so that I could perform at the highest level possible.

In this article, we’ll cover just that—how to fuel for your first half marathon (although it will be applicable for anyone running a half marathon). We’ll discuss what to do leading up to the race, what to do on race day, and how to recover so that you’re properly fueled for race day.

“Nothing new on race day.” This is rule #1 in the racing world. If you want to do something during a race, try it out several times during your training. This especially includes fuel. Running friends encouraged me to experiment with different types of fuel ahead of time just like I would with clothing I was considering wearing for race day.

Experiment to Find What Works

Different people are going to have different preferences. One of my friends, who is an amazing runner, loves GU energy gels, but it just wasn’t for me. I much preferred Gatorade chews. Other runners I know swear by Maurten, Tailwind, or Nuun. There are many options to dial in your race-day fueling.

Ask around and see which of these brands your friends are using. See is you can nick a sample from them to try on a long run and see how your body responds. You might discover something that you really love, or, conversely, something that you hate.

Just as it is important to try a variety of different outfit options to figure out what will be most comfortable for race day, trying different types of fuel will allow you to select the best option for your first half.

Try anything that sounds interesting to you, but you should especially consider trying four different types of fuel.

Known as gels, sports gels, or running gels, energy gels are packets of caffeine, carbs, and electrolytes. Since it’s important to replace lost carbs and electrolytes when you’re running longer than 90 minutes (which almost everyone will do for a half marathon), gels can be a great fuel option for your first half.

Gels have a gelatinous consistency that is easy to swallow without chewing. They pack about 100 calories each, and it is recommended to eat one every 45 minutes or so. But experiment to see what’s best for you. Depending on your size, you might need to take more or fewer per hour.

The great thing about gels in particular is that you don’t have to chew, which means they can be easier to use mid-run than other fuel options. They can also be dissolved into water bottles if you don’t have a drink mix and want something more than water. Ideally, you’ll take a gel at least once during your half marathon, at about the half-way point, to fuel up for a strong finish.

I opted to use Gatorade energy chews because I liked the taste, they fit easily in the small pocket that I had, and I knew exactly how much I was getting each time since it was contained in a small chew.

One chew every 3 miles worked well for me. Rather than chewing it, I sucked on it, which gave me something to do and distracted me when running got tough. A typical chew has about 35 calories, so three chews is about the same as one gel.

I tried a couple different flavors before my race to decide on the one that I liked best and that didn’t cause any negative impacts in my body. It happened to be the green apple flavor, which was great motivation for my race because my favorite color is green. 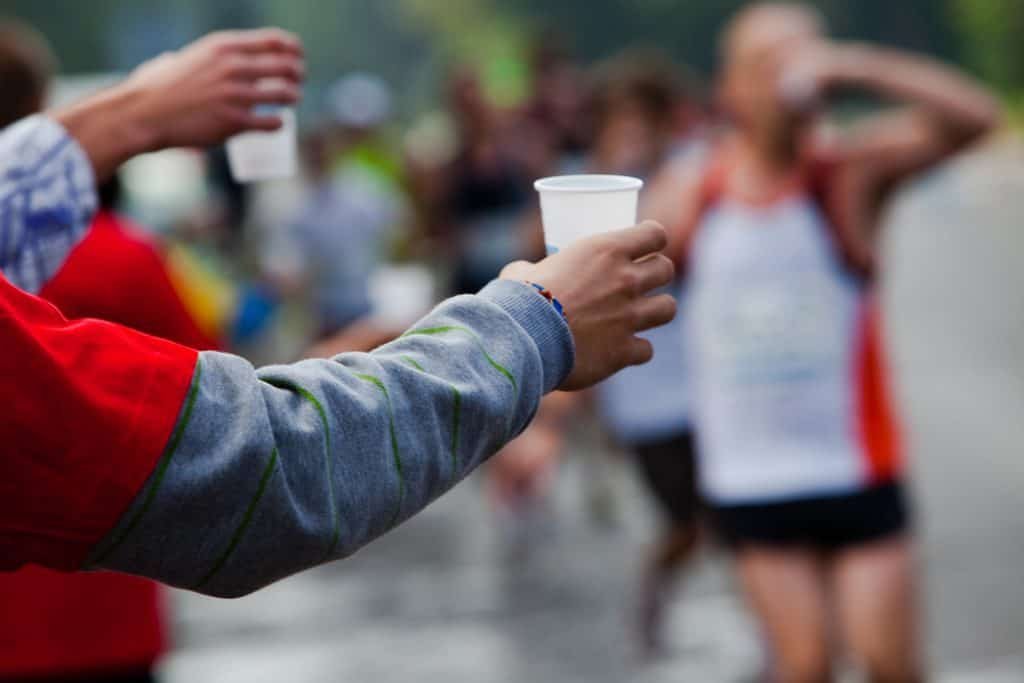 Sports drinks can be very sugary, but they also provide electrolytes, which your body needs to replace what it’s lost through sweat. You might consider making your own sports drink that is less sugary. My brother-in-law does this. Or, just purchase a less sugary option if you’re focused more on the benefit of getting electrolytes. With drink powders, you can customize how strong you want your drink (although some brands, like Maurten, warn you very sternly to follow their powder/water ratio exactly).

Related: How To Train For A Half Marathon On A Treadmill

It’s important for your body to replace carbohydrates that it has lost during a long run, but some people don’t like all the processed sugar in sports drinks and energy gels and chews, so they prefer to eat real food.

This was the preference of some runners in Christopher McDougall’s book, Born to Run. You might consider trying nuts, pretzels, fig newtons, bean burritos, or even a peanut butter and jelly sandwich. These options will provide carbs, protein, and salt to help your body refuel. Talk to your trail-running friends about aid station food. Trail and ultra runners are the real pros in this category.

What to Eat the Week Before Your Half

You’ll want to add some more carbs to your diet the week before your half. While it’s more important to carb-load before a marathon, it’s also worth it for a half because you’re likely going to be running longer than 90 minutes.

Timing is key. Rather than eating a giant plate of pasta the night before a race, focus on dinner two nights before, and lunch one day before. This gives your body a bit more time to reap the benefits of your carb-intensive meal.

I personally tried to add some complex carbs. Whole-wheat pasta with pesto sauce and tacos with whole-grain tortillas filled the week leading up to my half. That way, I got in my carbs without it being too heavy.

You’ll also want to make sure that you’re hydrating properly. I drank plenty of water during the week before my race, and I drank one sports drink a day during the two days before my race so that I would have plenty of electrolytes in my body.

What to Eat the Night Before Your Half

The meal you eat for dinner the night before your race is important even if it’s not the focus of carb-loading. This is not the time to go to McDonald’s and get a big Mac. You want something healthy but filling.

I personally opted for salmon, steamed spinach, and quinoa as my last dinner before my race, and that was a great choice. It gave me the fuel I needed, but it wasn’t too heavy, and I didn’t feel like I was overflowing.

What to Eat the Morning of Your Half

Even if you’re someone who doesn’t normally eat breakfast, don’t do that the day of your half. You want to give yourself something to get you going. I personally opted for a banana, because I didn’t think I could stomach any more food.

I know other people who will eat half a bagel and drink some orange juice or eat oatmeal with berries on top. Figure out what’s going to be best for you by trying different options in the months leading up to your race.

Don’t forget rule #1, though: Nothing new on race day. Now is not the time to try a new breakfast cereal or to break out that new juicer you’ve been meaning to try. If you haven’t had this breakfast before one of your long training runs, don’t start now!

How to Fuel During the Half 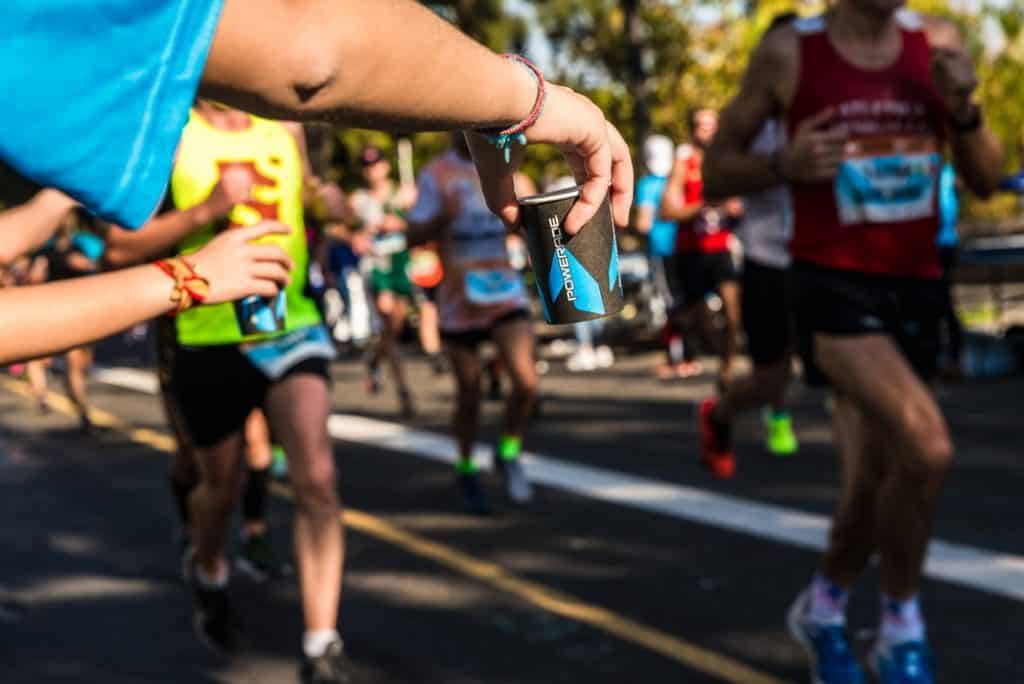 You’ve prepared for race day. Now, it’s finally here. Make sure to knock it out of the park by fueling properly during your half.

Use the Method That Worked Best During Training

This is not the time to try something new (rule #1 is worth repeating). Use the fueling method that worked best for you during training. Whether that was gels or real food, don’t do anything different. Even if you see a new product at one of the fuel stations during the race, it’s probably not the best idea to try it because you don’t know how your body will react.

Related: How to train for a marathon on a treadmill

The big question you might have is, “Should I use the on-course sports drink?” I would answer that it depends on how you’ve trained as well as what the weather is like.

If you’ve been drinking sports drinks during your training, it’s probably fine to use the on-course sports drink. But if you’ve just been using water, you might want to forego the sports drinks because it might be too much sugar in your body if you haven’t prepared for it.

Weather, though, might play a role. If it’s much hotter than you anticipated, you’ll be sweating more, which means that you’ll be losing more electrolytes. In that case, it might be good to take the sports drink during one of the fuel stations.

That’s what I did during my half. It was quite a bit hotter than many of my training runs had been, so I opted to take the sports drink at one of the fueling stations because I knew that the weather was impacting me and I wanted to replace the lost electrolytes.

How to Carry Gels, Chews, Etc.

Everybody is going to do things differently. Depending on how the race is set up, a friend or family member might be able to hold onto your fuel and give it to you mid-race so that you don’t have to carry it.

I personally had a small pocket in the top band of my shorts, which made it easy and comfortable to carry a few items. During my training runs, I could fit my keys and a couple chews, and, for my race, I included my hotel key and my chews.

How to Recover From Your Half

Don’t forget this last step—make sure that you get the proper nutrition to recover. I know the last thing that I wanted to do after my half was eat food. Half-marathons are exhausting, but I took all the fuel that they provided once I crossed the finish line.

A couple cups of Gatorade replaced the electrolytes I had lost. A few hands-ful of nuts and a banana put back some calories as well as salt and potassium. I also made sure to stretch and not let my muscles get tight. After I showered, my family and I went out for lunch where I got a salad with some chicken tossed on top for protein.

Again, you want to be smart about what you eat after your half so that you don’t feel too empty or too full. Picking healthy options with some complex carbs, protein, and electrolytes is the way to go.

In the end, properly fueling for your first half will make your race that much more comfortable and enjoyable. It will ensure that you perform the best that you can because you’ll have plenty of fuel in your body!

Training Tips for Walking a Half Marathon

How To Go From The Couch To A Half Marathon

Best Running Shoes for Half Marathons in 2022