Home » Beginners » How to Become a Faster Runner

How to Become a Faster Runner

If you’ve been running for any length of time, chances are that you’ve probably looked into ways to become a faster runner. The good news is that there are many different ways to become faster, and the more you incorporate into your routine, the better chance you have at getting faster quicker!

Change Up Your Pace

The surest way to ensure that you don’t get any faster is to always run the same distance (and maybe even the same route) at the same pace. Your body will start to get used to that distance and pace and won’t have to work as hard, meaning that your body will get kinda lazy.

In order to make sure that you’re getting faster and not plateauing, you have to change up your pace. A common workout is the tempo run, at a comfortably hard pace you can sustain for at least 20 minutes, or through interval training at paces you can only sustain for a minute or two.

I’ve personally found that interval training has been great to help me improve in speed. While what intervals you choose varies by person, I’ve done eight repeats of a quarter mile (roughly 400m, or one lap of a track) at a particular pace with short walking/jogging breaks in between. Half-mile or 800m repeats are another common interval for distance runners. Start with six repeats at a pace slightly slower than your 400m intervals. This has increased my speed by quite a bit.

Another option is the hilarious word ‘fartlek.’ Much to the chagrin of your inner 11-year-old, it’s a Swedish word that just means “speed play,” and it’s interval training on a more random schedule. You can vary up your long runs this way by including a couple sprints and jogs. You’ll get variety plus increased speed and endurance.

Finally, you can’t go wrong with a progression run. This is one of my favorites to do, as it’s great for working on speed and endurance as well as giving you an amazing feeling when you accomplish it. Start at a particular pace, and each mile, drop your pace by something like: 15 per mile. I’ve done this several times, and it’s an amazing feeling to see that you started out at a 10:45 pace and ended with a 7:45 pace for a 10 mile run! 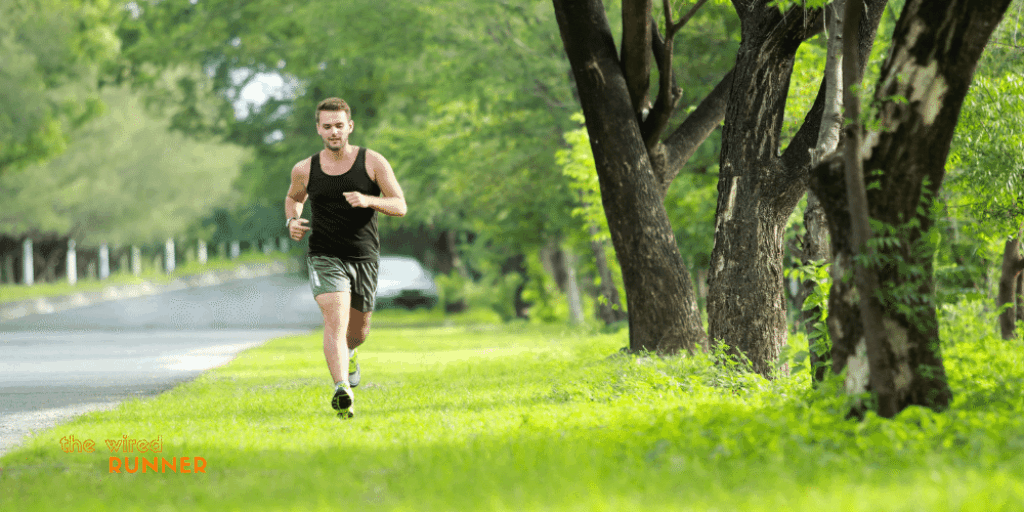 Strengthen Your Core (and Body in General)

Cross-training isn’t just about taking a break from running and doing something else. If you want to get faster, you need to strengthen your whole body. So those days spent away from running can actually be beneficial to your running goals. Strengthening your core, and the rest of your body, allows you to have more force when you’re running.

You don’t have to spend hours working your core and abs. Just adding 15 minutes of core exercises a couple days a week will give you everything you need to speed up. Even if you don’t have a lot of time, make sure you do even just a few lunges, planks, pushups, and squats.

If making progress is your goal, then doing a little bit more, or a little bit better, on each hard workout might seem a little obvious. But I’ve found it to be helpful. You’re going to make the greatest improvements by small things that you do consistently every day, so start good habits.

This may not mean that every run is faster than the previous one, but try to push yourself in at least some small way each time. That might mean running just a little bit harder at the finish or going a little bit further.

Each time, the little bit more will gradually increase until you find yourself several months later able to do something that you never expected to do. Slow and steady will pay off!

Another great way to do a little bit more is running with a faster friend every so often. It shouldn’t be someone who is too much faster than you, but anyone with a pace that is 30 to 60 seconds faster than yours is a good partner to push you during a speed workout.

If you want to become a faster runner in a way that doesn’t put as much stress on your body, hills are the way to do it. They will train you to run faster for hilly race courses as well as flat ones.

While hills are killer as you’re going through them, you’ll build muscle strength (toning those calves!) and give yourself a boost of confidence. Plus, hills will help you with your mental game, as you have to focus on the task at hand and get through the hill.

It’s definitely grueling, but with the gains in leg strength, you’ll see marked improvements in your speed.

While many ways to work on speed come with more or different running, an easy way to increase speed is to make sure that you’re getting the proper nutrition. Because you don’t have to fit in an extra run or workout, it should be a straightforward way to add speed!

Simply put, junk food is not conducive to fitness. This isn’t the place for a full discussion of the many popular eating philosophies, but one thing holds true across all of them: minimize processed foods, maximize whole foods, prepare meals fresh, and don’t overeat. Good food translates to good energy.

Dehydration is the silliest way to lose speed. Plus, you’re not taking good care of your body. If you’re dehydrated, you’re making your heart work harder, and this can come from even the slightest dehydration!

If you want to perform your best and give your body the best treatment, take the time to drink plenty of water. And if you’re trying to lose weight, drinking cold or ice water will help you burn a couple extra calories, killing two birds with one stone.

Take the Time to Stretch, Use Good Form, and Rest

We can all be lazy and sloppy at times, but if you want to get faster, the more consistent you can be, the better! You want to make sure that you’re taking the time to stretch…ideally, every day.

If you specifically target your hip flexors, you’ll increase your lower-body flexibility, which will improve your stride. Additionally, your muscles will just feel better from daily stretching, and you’ll reduce your risk of injuries. I read about one runner who never had an injury in 10 years, and it was likely due to daily stretching and a little bit of luck.

When we first start running, we probably try to work really hard on our form, but as we run more, it’s easier to get sloppy. Don’t do that! Make sure that your shoulders are facing forward and open, your face is forward, your hands are not tense, your arms are swinging forward, and your upper body is tall, yet relaxed.

Finally, make sure that you take a day or two per week to give your muscles time to rest and recover. When you run and work out, you break down muscle fibers. If you want them to get stronger, you have to give them time to heal, so don’t skimp on your rest days! You need them.

Many of us don’t get the amount of sleep we need, and that’s not even taken into consideration extra sleep time you need from training hard. This has its disadvantages for everyday life, but it especially impacts running. Depending on your body, you probably need between 7-9 hours of sleep a night. Make sure that you get that amount. Just as you can prioritize a track workout by putting it on the schedule, prioritize your sleep.

Research demonstrates that athletes who get more sleep have better reaction times and finish faster, so there’s no reason not to start making sure that you get a little bit more sleep. Make sure that you put away those devices (phone, tablet, or whatever) at least 30 minutes before you try to fall asleep.

It’s important to give your body time to calm down before trying to fall asleep, and electronic devices do the exact opposite by stimulating your brain and body. If you want to sleep better and run faster, put your phone across the room at night! 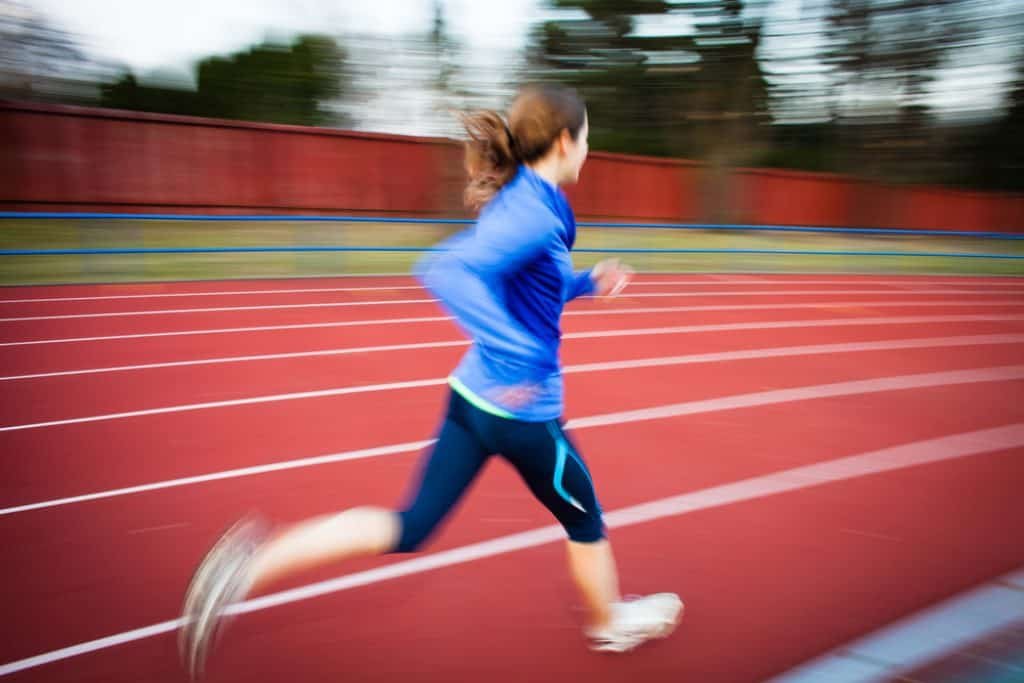 Have a Specific Goal

It’s hard to reach a moving target. If you don’t have a specific goal, it’s going to be challenging for you to push yourself harder. Simply saying that you want to be faster gives you no idea of how much faster.

Let’s say that you used to run 8:30 minute miles, and now you can do 8:25 minute miles. That’s technically faster, but that may or may not meet the intention of your goal. So be more specific, and then you’ll be able to reach that goal.

Shoot for the (reasonable) stars because it gives you something to strive for. I personally had no clue of what kind of pace to train for with my first half marathon, and where I was currently at in terms of running would likely have had me finishing at 2:30 for a half.

I decided that I wanted to see how much I could beat that time by, so I’ve been training for a very aggressive goal, which has forced me to work harder (although I haven’t overdone it). When the actual half comes around, we’ll see how long it takes me, but I’m guessing it will be faster than what I originally thought I could do.

I remember reading a sentence several months ago that simply stated that the last little bit of a race, particularly a longer race like a half or full marathon, can make all the difference between 1:44 (and thus under a 1:45 time) and 1:46.

The article then encouraged runners to finish strong, which is something I’ve tried to tell myself every time that I’m nearing the end of a run. It’s those last few minutes and miles that will make a difference in my time.

First, I can’t quit early because the race isn’t going to end early. Second, now is the time to push. You’ve stayed steady and consistent the whole run. Your body needs to know that it can push hard at the end. Finally, how bad do you want it?

I’ve tried to give it everything I’ve got in that last mile because I have less than 10 minutes to go, I know I can sustain the pace, and I’ve always heard that it’s the last 2-3 reps in strength training when you see the greatest improvement. I imagine it’s the same for running.

So, push yourself at the end. Often the pace for my last mile is faster than the overall average pace I want to have, sometimes by a minute or more. It feels way better finishing strong because you know you gave it all you’ve got.