How Long Does Runner’s High Last?

Why do you run? While we’ll all have different answers to this question, chances are that running makes you feel good.

You can be physically spent after a race, but there’s always that element of pride, joy, and excitement that you’ve finished.

Sometimes these feelings of elation can kick in during your race. It’s most common during half-marathons and longer.

This is known as runner’s high!

It can be super motivating. But how long does runner’s high last? Can you use it to your advantage?

Let’s look into it in more detail. 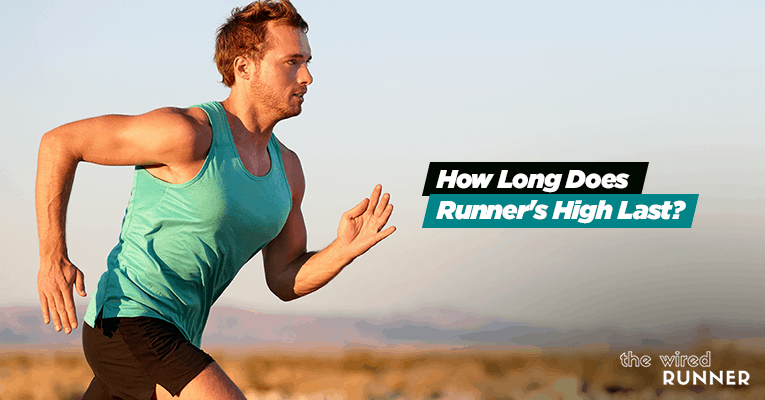 What is Runner’s High?

The term “Runner’s High” refers to the joyful feeling runners get during or after their run. Common feelings include elation, extreme joy, and reduced stress. Some runners even report reduced pain.

It can kick in sometime during your run or after your run. There’s no specific time that runner’s high kicks in, and it doesn’t necessarily happen in every run!

Runner’s high is technically caused by stress on the body. When you run for an extended period of time, your body takes strain.

The body needs extra help to keep performing its various bodily functions. So it begins to release two important components: endorphins and endocannabinoids.

Endorphins are also known as the “happy chemicals” in the body. You may be surprised to learn that endorphins are extremely similar to opioids, which have pain-relief properties and can induce feelings of euphoria.

These chemicals are released when you exercise. That’s why runner’s high often comes with reduced pain. Your body is basically producing its own pain relief medication!

These are neurotransmitters – meaning they transfer messages between nerve cells. Endocannabinoids contribute to a variety of bodily functions, and the body has a whole endocannabinoid system!

You may notice the telltale “cannabinoid” reference in this word. Cannabinoids are the compounds found in cannabis. They have excellent health-promoting properties, but they also have psychoactive properties.

Endocannabinoids (“endo” refers to them being “within” the body) are a very similar compound to regular cannabinoids. They’re produced naturally in the body, and while they don’t cause a high in most cases, they can activate to cause a buzz or “high” during runner’s high.

How Long Does It Last?

Runner’s high can last anywhere from a few minutes to a few hours.

It depends on a lot of factors, including how long you run for, how intense your exercise is, and how healthy your endocannabinoid system is.

Does It Only Happen in Running?

Actually, despite its name, runner’s high can happen in other sports too. It was named after running as it was first noticed during half-marathons and full marathons.

But athletes can achieve the same feelings in any other form of exercise that can be performed at a continuous level for at least 45 minutes to an hour at a time. Rowing, cycling, swimming, and a range of other exercises can create the same feeling.

Take note that these exercises are rhythmic. Some may consider them to be monotonous! Running is a repetitive motion, which may contribute to runner’s high. You may not get a good high from forms of exercises that aren’t continuous and rhythmic.

Techniques To Get a More Consistent Runner’s High

You don’t need to go all-out to get a runner’s high. Ideally, you should be in a zone where your body is stressed enough to produce the natural chemicals, but not so stressed that it goes into emergency mode. 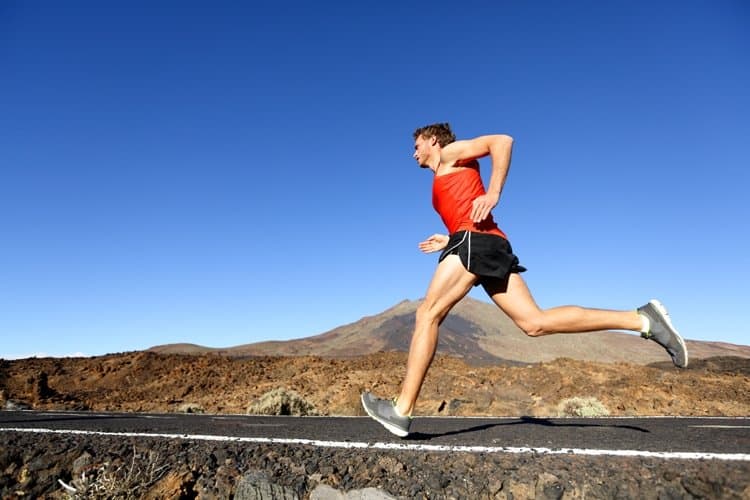 Between 70 and 85% of your maximum intensity is a good range to aim for. Keep in mind that you’ll also need to perform at this level for more than 30 minutes without a break.

Run for a Longer Time

There’s a runner’s high “sweet spot”, which is typically between one and two hours after beginning your workout.

If you’re aiming for a runner’s high, you’ll need to be running (or doing other rhythmic exercise) for at least an hour at the same intensity.

Running in a basement isn’t a great environment. We understand that sometimes, you have no choice but to stick your treadmill in the best available space and run there when the weather is bad or other circumstances call for it.

But if you’re after a runner’s high, fresh air and the great outdoors can help! There are a whole lot more stimuli for your senses, which can help push you to that high.

It’s also a great idea to run in a park or on a trail instead of around streets with traffic. Traffic pollutes the air, and running somewhere that’s beautiful and has clean air not only gives you a mental boost, but it also means there’s more oxygen getting into your lungs.

Beginners aren’t likely to experience runner’s high. This is because they can’t sustain an intense level of activity for an extended period of time.

If you’re a newbie, the best way to get to the point where you can run or exercise intensely for an hour or more is simply consistency!

As hard as it is, it’s important not to push yourself too hard in the beginning. Work at a steady and regular pace to get your running to that point. It’s advisable to increase your time or mileage by 5% a week.

Be aware that this will be a long process. You won’t reach the runner’s high point in a few weeks if you’re starting from scratch. It’s likely to be a few months at least. Be patient and consistent!

Incorporating intervals or pyramids into your running will help to prevent monotony, but it also stops your body from acclimating too easily to your workout.

Intervals keep the intensity of your workout high, getting you closer to that high. It also gives your body and cardiovascular system a little bit of time to calm down between intervals. That way, you still get a properly intense workout without overdoing it.

You can download an interval app or just use your watch.

This is an area in which many of us fall short. Life is busy, and often we end up sacrificing sleep to fit everything in.

But sleep deprivation can have many detrimental effects, one of which is a reduced capacity for intense physical exercise. 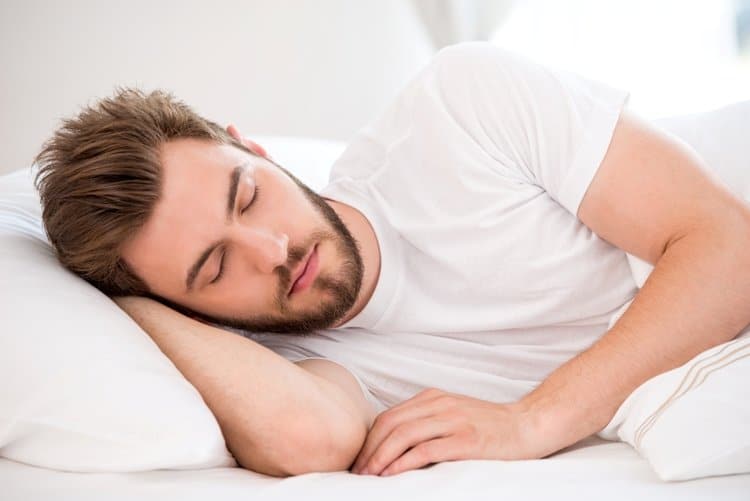 In terms of reaching that runner’s high, lack of sleep also inhibits endocannabinoid production. If you want that buzz, get enough sleep! 8 hours is optimal, although if you’re catching up, your body may need closer to 9 or 10 hours at first.

Rest is equally as important as running! If you don’t give your body enough time to rest in between runs or other exercise sessions, your chance of injury increases.

It can be super tempting to push hard every day. While you may be able to do it for a few weeks or even months, it’s not sustainable in the long term.

Schedule rest days during your week. At least two rest days per week are necessary for beginners. Once you’re used to that, you can begin to do active rest days, during which you can incorporate recovery runs or cross-training.

Why Aim For a Runner’s High?

You might be wondering why you should aim for a runner’s high. Pre-workout does the same thing, right?

Well, not quite. If you’re taking pre-workout, you’ll get a nice initial buzz but it wears off after time. Runner’s high is a euphoric experience that gives you a pre-workout feeling mid-run.

But apart from that, there are other benefits to a runner’s high that you won’t get from pre-workout or a mid-run energy gel.

Training Will Get Easier

Runner’s high can be a great motivator. Once you’ve experienced it, your body will be after that feeling again. It will be able to push harder next time to get you closer to that chemical release.

Your Mood Will Improve

We could all do with more natural happy chemicals flowing through our brain and body!

The good news is that you don’t need to hit that runner’s high for these chemicals to be released. They just release in exponentially higher amounts when you reach a certain point, which is why you get that high.

But even a light jog or moderate exercise gets these chemicals flowing, which improves your mood.

Losing Weight Will Be Easier

Running for longer increases the number of calories you burn. So does high-intensity interval training. If you’re incorporating both into your training, you’ll lose weight much faster than doing low-intensity, short runs.

Once you’ve shed a few extra pounds, you’ll also find it easier to run further and at a higher intensity. The easier it becomes to run, the more you’re likely to do it. In turn, the more weight you’ll lose.

Keep in mind that losing weight depends largely on your diet. You can run all you want, but if you’re eating more calories than you’re burning, you won’t lose weight.

It Gives You a Solid Goal

There’s no telling exactly at what point your runner’s high will kick in. So it’s a fairly open-ended goal, but aiming for that feeling is an exciting goal to motivate you and spur you on when you begin to feel like giving up.

It’s also a goal that never ends! Feeling a runner’s high for the first time is incredible. But it’s an awesome feeling the second time, and the third, and the 100th. Just because you’ve reached it once, it doesn’t mean the goal is ticked off.

Whether you’re training or running a race, whether you’re familiar with the buzz or not, hitting that high is a great goal to work towards.