Hoka One One Vs On Running – Which Is Right For You?

Both Hoka and On Running are unique shoes that are instantly recognizable. And each brand has runners that swear by their shoes.

The Hoka shoes are maximalist, noticeably cushioned, and have a wide platform. They make mostly running shoes, but you can also find some casual shoes and recovery sandals.

On Running shoes have a unique cushioned sole which is extremely shock absorbing. They have a narrower platform and a sleeker design. The brand makes mostly running shoes but has also started making certain types of clothing.

Let’s have a look at the difference between Hoka One One vs On Running shoes so you can decide which of these interesting brands is the right one for you. 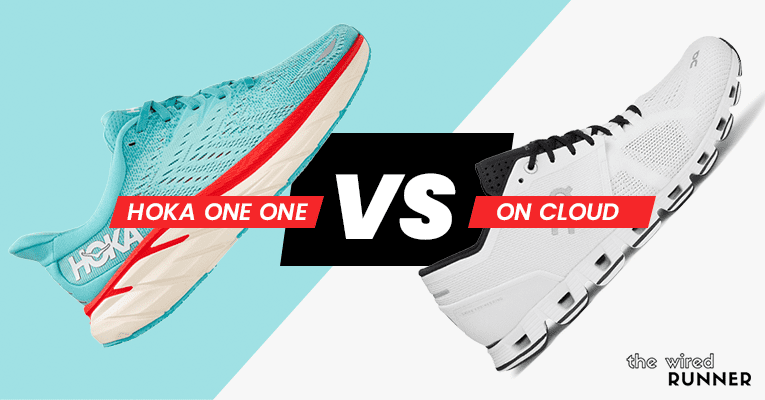 Hoka One One was founded in 2009, by mountain trail runners Nicolas Mermoud and Jean-Luc Diard. They wanted to create a shoe that would allow them to run downhill faster and improve their race times.

After a number of ideas and a few prototypes, they finally created the first “maximalist” cushioned running shoe on the market.

The French-born brand was given a Māori name, which means “fly over the earth” when translated to English.

Hoka shoes were immediately set apart from the crowd and easily recognized for their oversized outsole. They had more cushioning, provided a stable platform, were made from lightweight materials, and featured a rockered profile.

The brand quickly gained popularity with all types of runners, as the shoes offered a smooth, cushioned ride that placed less impact and stress on the feet and legs.

As they gained in popularity, Hoka expanded their range of shoes to include track spikes, lightweight trainers, and racing shoes.

In 2013, Decker Brands, which is also the parent company for other shoe brands like Teva and UGG, purchased Hoka.

On—also referred to as On Running—was founded by three friends—Olivier Bernhard, David Alleman, and Caspar Coppetti—who shared a love for running.

Together, they wanted to create distance running shoes that would provide the “perfect” running experience.

The shoe had to be highly cushioned to provide a soft landing, but also a responsive take-off while being extremely lightweight.

After developing numerous prototypes, the On brand was founded in 2010, in Zürich, Switzerland.

On running shoes gained popularity quite quickly, due to the unique CloudTec cushioning elements that cushion your landing and provide a firm take-off.

Hoka One One uppers are plush and comfortable. Made of engineered mesh or leather, some of the shoes feature light synthetic overlays for added support.

They’re breathable and quick-drying, thanks to multiple perforations across the upper. The uppers are also lightweight and are known for a generous fit. Hoka uses a traditional lacing system.

Another feature that’s popular on the Hoka uppers is the “elf ear” tab at the heel. Not all their shoes offer this, but it’s common in their latest offerings. The tongue and ankle collar are also known to be plush and comfortable.

Mesh versions of shoes are often available in a range of bright colors, instantly noticeable, and easy to match with your running outfit. Leather shoes are available in black or white.

On Running shoe uppers are made from blended fabric, with at least 30% of it being recycled polyester.

They’re seamless and soft to the touch, and feature no-sew taped reinforcements by the toe cap and across the shoe. This helps to add structure to the upper and provides a comfortable, supported, and secure feel. 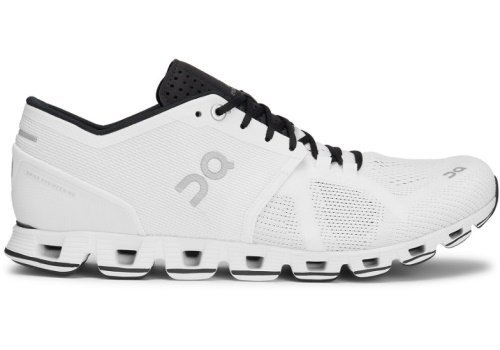 The uppers are extremely breathable and the fabric has a slight stretch that moves with your foot through your stride.

Another feature of the mesh uppers is built-in antimicrobial properties, which help to prevent unpleasant odors, keeping your shoes fresh.

Some of On’s shoes use an easy-entry lacing system—a bungee type lace—which allows you to slip them on and off easily. However, these can be replaced with conventional laces for a personalized fit.

The older Hoka shoes used a single-density EVA-rubber foam, but most of the newer designs are using Profly foam. This is a dual-density foam that uses denser foam in the forefoot and soft foam in the heel. It allows for a soft and comfortable landing while providing a springy toe-off.

The midsoles also incorporate Active Foot Frame technology, which has been likened to a bucket seat in a vehicle. This cradles the foot, offering support and a comfortable, stable feeling.

Hoka has also started using carbon plate technology in some of its newer shoes, to increase energy return without reducing the cushioning.

Stability shoes use J-Frame technology, which is a denser foam running in a J-shape around the medial side of the shoe for better support.

On Running also has a unique-looking midsole and it’s instantly recognizable. Their Cloudtec cushioning features 16 small pods underneath the foot, which compress as you run and absorb shock, returning it to the foot for a bouncy toe-off.

Many On shoes use Zero-Gravity foam, which is soft underfoot but firm enough to hold the shape of the Cloudtec pods. Their later shoes use Helion foam, which is a blend of EVA and olefin block copolymer foams, which is more temperature-resistant.

There’s also a plastic Speedboard running down the middle of the midsole, similar to carbon plate technology, which allows the shoes to flex with the foot and rebounds for a speedier run.

The majority of Hoka’s sole is made of the thick lawyer of midsole EVA. There’s a light layer of rubber over high-wear areas of the sole for increased durability and better grip on a number of surfaces.

On their stability shoes, the J-Frame is easily seen on the outsole, a firmer rubberized section running along the medial side of the outsole to provide support for overpronators.

Another well-known feature of Hoka shoes is their meta-rocker sole. Some use an early-stage meta-rocker, which is when the curve of the sole is slightly behind the metatarsals. 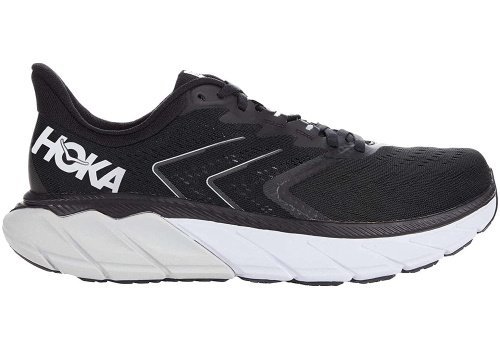 Fewer of them use a late-stage meta-rocker, which has the curve placed in front of the metatarsal heads. This allows for more stability of the platform while still assisting with the heel-to-toe transition.

A lot of the On shoe midsole is exposed, but the highest-wear areas of the outsole—the 5 pods in the forefoot and 3 in the rearfoot—are covered with a layer of high-abrasion rubber.

On updated this rubber compound in 2018—called Missiongrip—to be stickier and uses diagonally-lined textures for increased traction.

Hoka One One is a fairly durable shoe, as the thick midsole doesn’t flatten easily. The minimal layer of rubber on the outsole may wear away more quickly on the road but may last longer on the soft surfaces of the trails.

Some runners worry that On shoes don’t last long, as the midsole design includes a lot of open space. The worry is that the pods may wear through, rendering the shoe useless.

However, it takes a lot of use to wear away even the small rubber sections on the high-impact areas. They also don’t flatten easily, continuing to provide excellent shock absorption and responsiveness for a long time.

On recommends replacing your shoes when they’ve done between 310 and 465 miles.

Hoka’s cushioning has been described as marshmallowy. The generous stack height provides a soft feeling underfoot, effectively absorbing shock on every step. They do have 3 different levels of cushioning, which vary in softness.

However, this does come at the expense of responsiveness in many of their shoe models. They are rectifying this with the addition of carbon plates in some of their later shoes.

The unusual pod design means that On shoes don’t look very cushioned, but they do offer highly effective shock absorption. This adds to the comfort of the shoe on every step.

When this unique design is combined with shock-absorbing, responsive foam, the result is a highly cushioned ride that doesn’t feel overly plush.

Hoka shoes have a generous fit and would be suitable for those with slightly wider feet. Many of their newer model shoes have a more accommodating toe box. The length runs true to size.

On Running shoes are designed to be slightly more narrow in fit than Hokas. The fit varies a little more across the range of shoes, but they may be better suited to runners with narrower feet.

They also seem to have a fairly narrow heel, and even those with a more spacious toe box feel snug in the heel. They would be a better choice for runners with a narrow rearfoot.

Depending on which shoe model you like, you can expect to pay between $140 and $170 for most of the popular shoe models.

On Running shoes range from $130 for the entry-level shoes to $270 for their marathon shoe, the Cloudboom Echo.

You can find shoes for casual wear, hiking, racing, and every day running at all price points in between.

Both Hoka One One running shoes and On Running shoes are unique and effective at cushioning the feet. However, the brand that would be best for you depends on both your running goals and your personal style preference.

However, Hoka is favored by long distance runners who want the softness and don’t need as much snap in the push-off. They’re also the better choice for wide-footed users.

On shoes provide less plush cushioning but offer better energy return. They’re favored by runners who want a good mix of speed and comfort. They’re a better option for those with narrow feet.

Best Selling Hoka One One 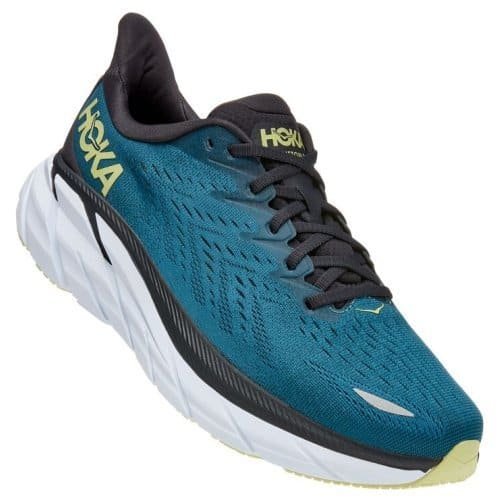 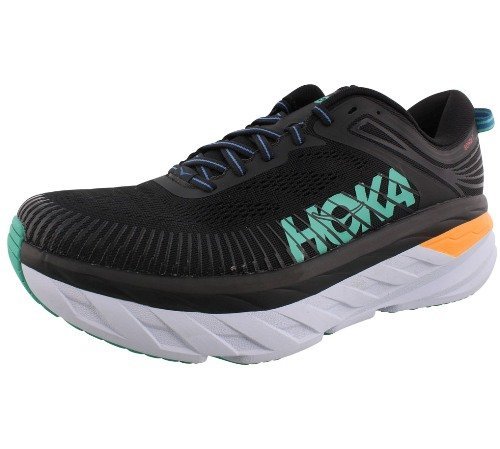 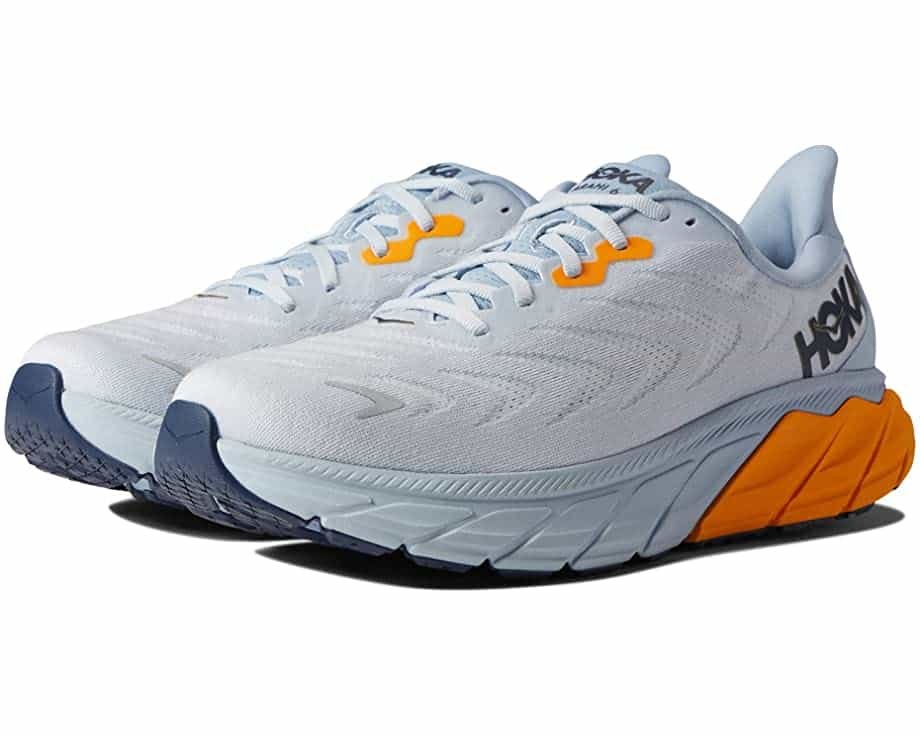 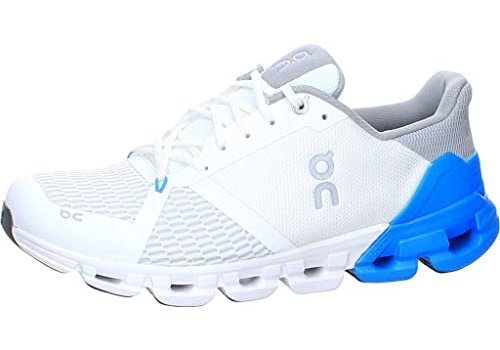 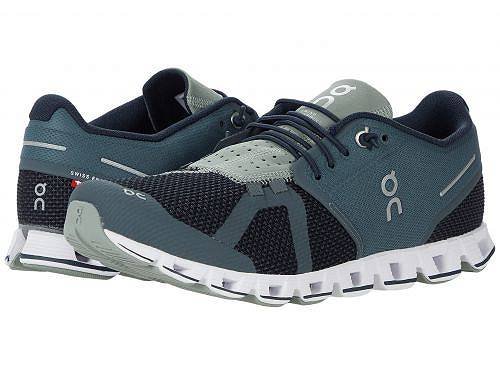 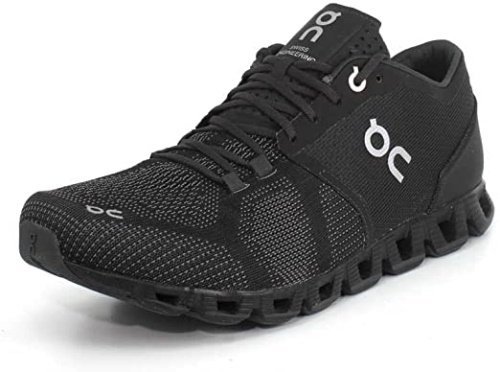