Hoka One One Clifton Vs Bondi – Which Shoe Is Best For You?

Hoka One One is a relatively new shoe brand, having been formed in 2009 in France. Despite their French heritage, the name (pronounced Hoka Oh-nay Oh-nay) is based on a Maori saying, which means something similar to “flying over the earth”.

Interestingly, the founders of Hoka were both former employees at Salomon! So they brought some great shoe tech knowledge with them and aimed to create running shoes that would soften the blows of downhill running. So began the Hoka One One brand.

As shoe brands start to gain popularity, certain models also rise to the top. With Hoka, that indisputably is the Clifton and the Bondi.

The debate over these two shoes is a tough one. They’re fairly similar, but have enough differences that you may hate one and love the other – or love them both! 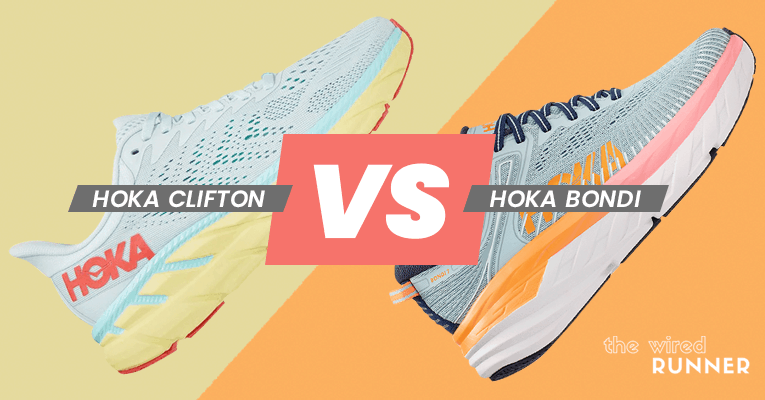 The Clifton is an unusually lightweight shoe. This is great for running fast but means you lose some of the cushion and support. If you know Hoka, though, you know that “less cushion” is a very relative statement.

The Bondi is the Hoka shoe with the most cushioning. And again, if you know Hoka, you know that’s really saying something. It features a rocker bottom, and the foot sits deep and securely inside the shoe. It’s the pricier of the two, but also the more durable, so it evens out.

Both shoes are neutral, made for non-pronating runners with medium/high arches. Despite the Clifton being less plush than the Bondi, both are more cushioned than your average running shoes.

And they both have the funky Hoka thick-soled look! Let’s get into their similarities and differences in more detail.

Both shoes feature a newly engineered mesh upper. They also both have a traditional lacing system.

The Clifton 8’s sandwich mesh upper has been well received by wearers. It makes the shoe very breathable without adding any extra weight.

No heavy overlays are present on this shoe. Subtle support is offered by 3D bands, strips of solid material between the perforations that give some rigidity to the upper without the need for extra material.

A plush Achilles collar and high heel tab provide both comfort and stability to the back of the shoe. The toe box is wide enough to be comfortable and allow the toes to splay.

The Bondi 7’s upper has been praised for its sturdiness and for providing extra structure and support to the shoe. Running around the midfoot and toe are small overlay strips, which give it extra structure from the sole up.

Although reports have suggested that the Bondi 7 is more breathable than its predecessor, many users claim that the upper is rather thick and not great at letting heat escape. If your feet are sensitive to heat, this shoe may not be the one for you.

If you’re not worried about your feet overheating, the plush memory foam ankle collar has been praised not only for its comfort but for providing an unusually stable lock-in to keep your foot secure in the shoe while you’re moving.

Hoka’s are known for their cushioned midsole, and neither of these shoes disappoints.

The Clifton has a full-length compression EVA foam midsole, with Hoka’s signature chunky 29mm stack height. An early-stage Meta-Rocker makes up for the forward propulsion the shoe lacks from the low heel-to-toe drop.

Clifton’s cushioning bed is symmetrical, catering to a neutral foot. According to their own website, the cushion is designed to be balanced – not too plush and not too responsive.

It offers great shock absorption, but with slightly less cushioning than the Bondi, it’s lighter, bouncier, and the more flexible of the two. 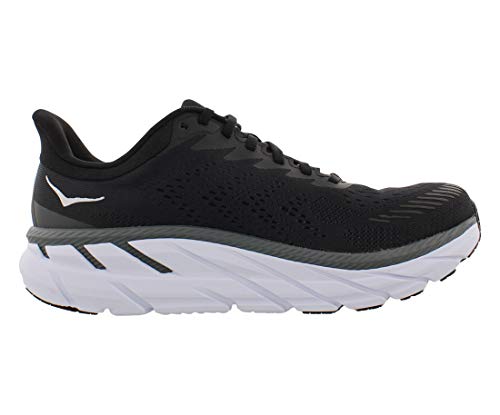 The Bondi 7 is said to be Hoka’s most cushioned shoe ever. It features a full EVA midsole, also including an early-stage Meta-Rocker for smoother heel-to-toe transitions.

This is what’s known as a maximalist shoe. Hoka labels their Bondi cushioning as being plush rather than balanced or responsive. That means you won’t be getting a lot of bounce in your toe-off, but your heel strikes will be superbly cushioned and shock-absorbing.

Be aware that some reviewers of these shoes have noted that the plushness of the cushioning can change depending on the climate. In cold weather, it seems to become more firm. In the heat, the cushion feels more spongy and luxurious.

The Clifton has strategically-placed high-abrasion zones to maximize coverage without adding extra weight.

The Bondi’s outsole hasn’t been extremely well-received, with parts of the midsole exposed without protective rubber. Depending on your gait, you may find that parts of the outersole wear out somewhat quickly.

It seems that while Hoka has put effort into creating the most cushioned shoes on the market, they’ve left other parts of their shoes quite minimalistic, and the outersole is nothing special.

The Clifton appears to fit true to size, while the Bondi seems to run slightly narrow, which is normal with Hoka shoes. Both of these models have a generous toe box.

The Bondi 7 is the first of Hoka’s running shoes that comes in various widths. Men have three choices (normal, wide, and extra-wide), while women have two.

Neither of these shoes is built for stability. Thanks to the luxurious cushioning, they’re both less stiff than a stability shoe would be.

If we had to compare, the Clifton would be the slightly more flexible of the two, as it features less cushioning and a lighter upper. The Bondi’s chunky cushion doesn’t lend itself to flexibility.

Regardless of the cushioning, neither of the shoes is sufficiently stiff to count as a stability shoe. In fact, the extended stack height may cause the shoe to be more unstable when on the move.

Of the two, the Bondi has more support, due to its expansive outer sole and thick cushioning. But if you need support, better to check out the Hoka Arahi or Gaviota, their true stability shoes.

Both shoes have quite a serious stack height, but an unusually low heel-to-toe drop. This means there’s not much of a forward lean when wearing them, so there’s no extra help propelling the runner forward.

The Clifton 8 features a heel-to-toe drop of 5mm. The stack height of 29mm at the heel and 24mm at the toe is unusually high, but not much padding is sacrificed in the drop. The majority of the cushioning is retained, giving a flatter underfoot feel than many other shoes.

The Bondi 7 has an even lower drop, at 4mm. The stack height is the same as the Clifton, although the women’s is 27mm. Being as cushioned as it is, the Bondi is not built for speed. The drop may not cater for propulsion, but that’s not what the shoe was designed for.

It’s worth noting that the increased stack height in these shoes could be a hazard for some. If you have weak ankles, it can be super-easy to turn an ankle if you’re not used to the extra height.

The Bondi is one of Hoka’s heaviest shoes, which is understandable given all that cushioning. Runners who aren’t after speed may not mind, but it’s likely to be noticeable even to casual runners. The Clifton sacrifices cushioning for speed and weight reduction.

At the time of writing, there’s only a $20 difference between the Clifton 8 and the Bondi 7 on Hoka’s website, with the Bondi 7 being the slightly more pricey of the two.

Considering the shoes are similar and the final choice between the two will most likely rest on your preference for cushioning, we feel that the price difference reflects the shoes and their quality fairly.

The Clifton 8 and Bondi 7 are fairly similar shoes. But depending on your running style, it’s important to make sure you choose the one that will benefit you the most.

We recommend the Clifton 8 for runners who want a good daily trainer that’s lightweight but still cushioned enough to feel plush. It looks more like a regular trainer than the Bondi, too. Interestingly, the Clifton is also vegan!

We suggest going for the Bondi 7 if you’re looking for maximum cushion. Runners who suffer from knee pain, back pain, or hip pain will benefit from the impressive shock-absorption properties. The cushion is also great for heel strikers who need extra padding.

If you’re going for speed, HIIT, or improving running performance, neither of these shoes is the best choice. While plenty of people race in them, they aren’t designed specifically for speed and responsiveness. For recreational runners, though, they offer the comfort needed for long distance running, whether in training or racing.

They’re close enough in price for the cost to be negligible. In the end, it will come down to your own preferences – are you going for max, cloudy cushion, or comfort and light responsiveness?

That will make all the difference. Whichever one you choose, your feet will thank you for the cushioned ride. 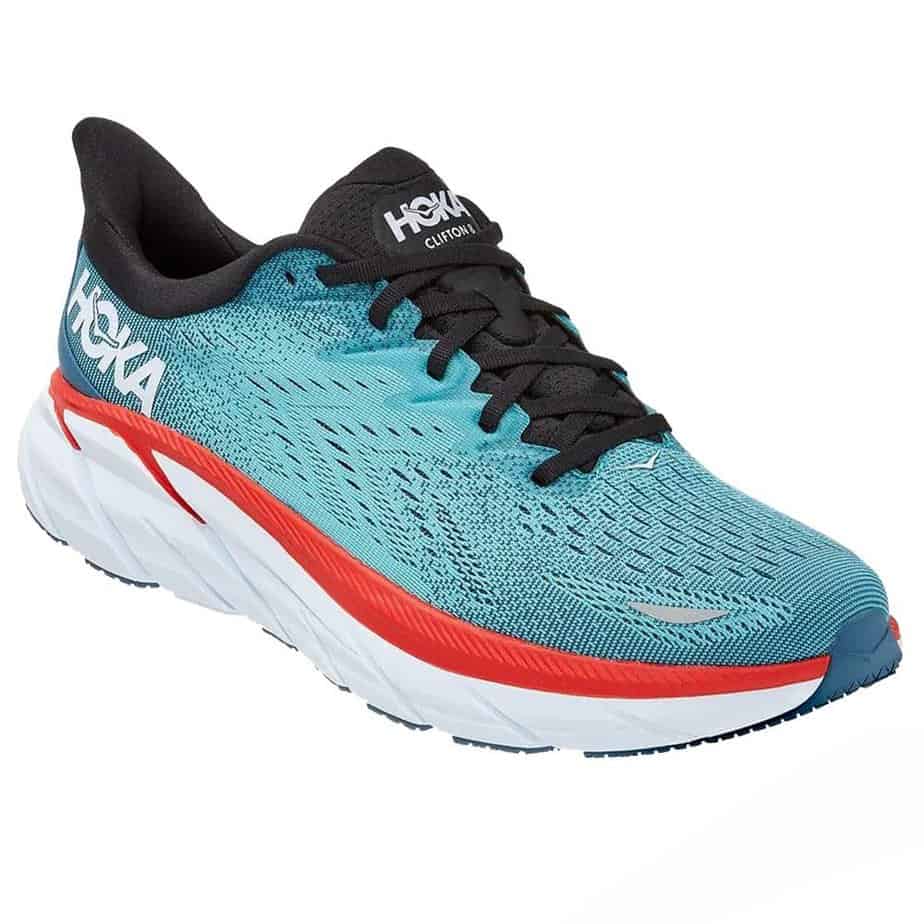 Hoka One One Bondi 7 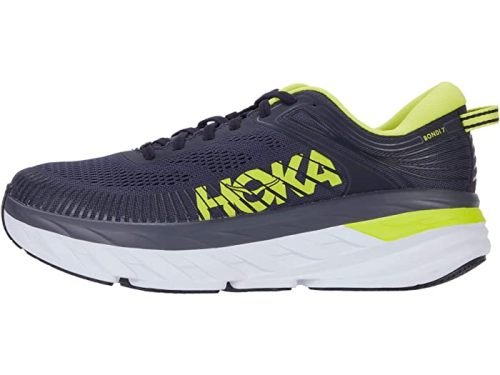