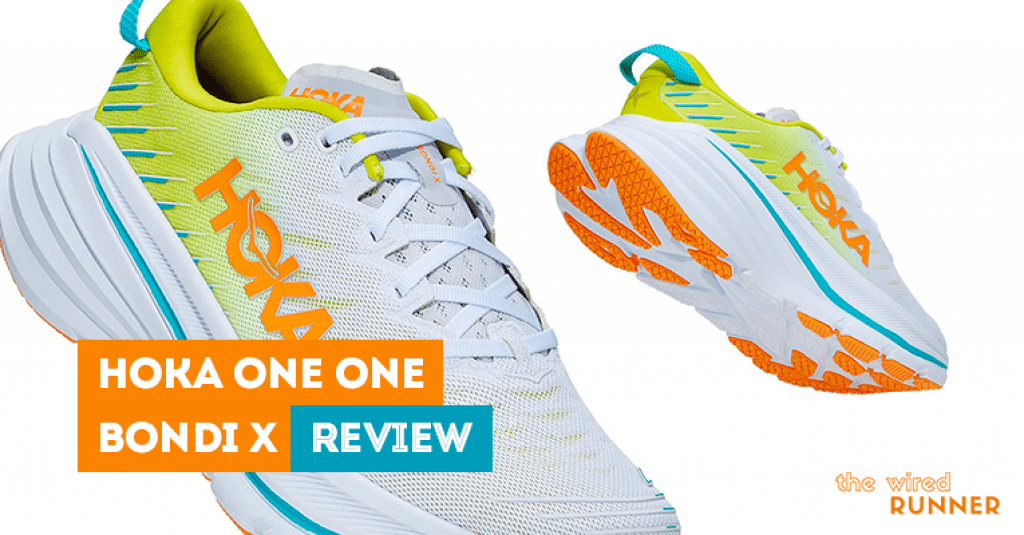 Hoka One One fans will love the fact that not much has changed in the making of this shoe. It retains many of the much-loved features of the Bondi, just with a little springy twist.

Hoka One One has always been known as a max-cushion, minimal-weight running shoe brand.

Although they do have some lower-profile shoes, the first thing that usually comes to mind when you say “Hoka” to a runner is that chunky, oversized midsole that’s soft underfoot.

The Bondi, especially, has always been known as a plush, padded running shoe that caters more to comfort than energy return, thanks to a heck of a stack height and a full hunk of EVA (and nothing else) in the midsole.

But that may be changing with the Hoka One One Bondi X – the beloved Bondi silhouette and cushion with a spunky carbon plate thrown into the mix.

If you’re unsure of this pairing, read through our Hoka One One Bondi X review to get the full scoop of what this shoe contains.

It became available in stores on October 1st, so if you’re a Bondi fan, go check it out!

The Hoka One One Bondi X is a new iteration of the much-loved Bondi. It’s a maximalist shoe, with a large chunk of soft cushion in the midsole.

The X features a carbon plate in the midsole too. This adds a touch more stiffness to the shoe, creating a more propulsive feeling. When paired with the meta-rocker, this could be a significant increase in performance over the Bondi 7.

It’s also worth noting that the Bondi X isn’t Hoka’s first carbon-plated shoe. But it is the first time the favorite Bondi line is getting a carbon-plated makeover.

The mesh upper is designed for breathability and stability. It’s uncomplicated, features minimal overlays, and uses something that Hoka calls 3D Hotmelt yarns, which are designed to be durable but not sacrifice breathability.

There’s plush padding in the heel and ankle collar, keeping up with the cushy feeling the Bondi is known for. A thin tongue helps provide an extra good lockdown on the foot and doesn’t feel like you’re choking the top of the foot.

It’s a comfortable fit that feels natural and easy on the feet. Flat and stretchy laces help you to really get a sturdy lockdown, which you need with the hefty midsole.

There’s also a decent-sized heel tab which makes this chunk of a shoe much easier to get on and off. The fit appears to be true to size.

Here’s where the Hoka gets fun. This is where plush padding meets sleek carbon-fiber plate, where all the real good stuff comes into play.

Let’s look at each element separately so we can really get into the details.

Like the Bondis before it, the X features the classic full-length, chunky slab of EVA foam in the midsole. 33/31mm in the heel and 28/26mm (men’s/womens) in the forefoot ensures that every part of your foot is more than sufficiently padded.

There’s nothing fancy about the midsole foam. It’s plain old EVA, soft underfoot for optimal shock absorption but dense enough to not be mushy as you run.

Ah, the new addition to the old favorite. If you take a look at the Bondi X, you’ll see a bright blue streak running along the outside of the midsole. This is a visual representation of the carbon plate, showing where it’s located in your shoe and the curve it has.

It adds some moderate stiffness to the known softness of the Bondi, which provides better responsiveness and energy return. The plate adds a smoothness to the heel-to-toe transition, making every step seem slightly more bouncy and fun. 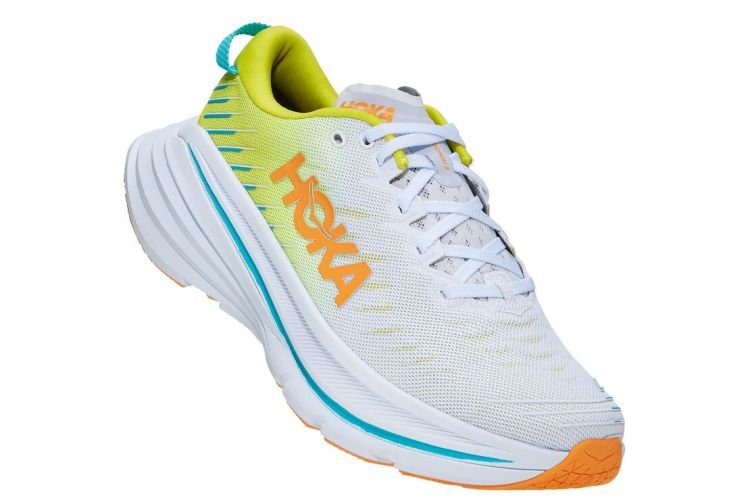 That being said, the carbon-plate paired with the sizable midsole isn’t going to turn the Bondi into a racing shoe. You’ll get a nice bounce and more energy efficiency, but it’s not enough of a performance boost to be considered a racing-worthy shoe.

The carbon plate and meta-rocker work really well together. The meta-rocker is early-stage, meaning it’s in the forefoot. It also works very nicely together with the swallowtail heel.

The heel facilitates a smooth move from the heel to the midfoot, and the meta-rocker takes over from there. They work really well in sync to make a very smooth heel-to-toe transition.

The Hoka platform is wide and stable. If you look at this shoe from the underside, it actually looks a little distorted. The wideness is an asset, though, as it balances out the stack height nicely and adds stability to the shoe. Anything narrower would feel wobbly.

Like most other Hokas, the midsole foam is exposed on the bottom. Most of it is covered with a light layer of bright orange rubber, with the exception of the midfoot, which is exposed midsole.

The rubber is decently thick, and should be fairly durable. It has a light triangular tread pattern which provides some traction, and the medial edge of the forefoot features a striped tread pattern instead for some grip variation.

In the rearfoot, there are four slits in the shape of an X, through which you can see the carbon plate. There’s no real structural point to this, unless it was simply to save on weight.

The potential problem here is that these grooves tend to pick up on small rocks, so by the time you finish your run, you’re clicking all the way down the road and have to spend a few minutes digging all the rocks out.

This could be a possible durability issue too. If rocks are consistently jamming in the EVA foam and being pushed around as you run, it may cause the foam to wear away faster.

Despite the addition of the carbon plate, the Bondi X is very similar in weight to the Bondi 7.

A men’s X actually weighs 0.1 ounces less than the 7, while the women’s weighs 0.2 ounces more.

The men’s shoe is around 11 ounces and the women’s is around 9 ounces in weight.

This isn’t bad – there are heavier shoes out there. And considering the generous amount of foam you get in the Bondi, this is actually one of the best weight-to-cushion ratios out there.

But those who were hoping for a lightweight racing-type shoe will be disappointed. Despite a bit of extra pep from the carbon plate, the heavier weight still works against you when it comes to speed.

Both the men’s and the women’s shoes have a heel-to-toe drop of 5mm. The men’s shoe features a heel stack height of 33mm and a forefoot of 28mm. The women’s is only slightly lower, with 31mm in the heel and 26mm in the forefoot.

Keeping the foot at less of an angle actually helps feel more stable. Considering the high stack height, those who aren’t used to the Hoka may feel unstable at first.

But the lower heel-to-toe drop helps to keep your center of gravity where it should be, and ensures that there’s no unnecessary pressure on the forefoot that could lead to injury or discomfort.

Be prepared to drop some extra dollars for the carbon plate. 50 of them, to be exact. The Bondi X is retailing at $200, which is kind of a huge leap from the $150 of the regular Bondis.

Worth it for the carbon plate? Some think so, others don’t. In the end, it’s up to you and how much you want to keep the faithful Bondi silhouette while gaining a light performance-enhancing element.

The Hoka One One Bondi X isn’t for everyone. Bondi fans will definitely be interested in this new iteration, but should think carefully before deciding whether it’s a worthwhile investment.

It’s worth investing in a pair if you can deal with the $50 hike and aren’t expecting speed miracles from the shoe. You’ll get a quality shoe with ample cushioning featuring the classic Hoka softness underfoot but with a bit of bite from the carbon plate.

But if you’re a casual runner who loves the softness of the Hoka and isn’t too focused on shoe tech to improve your speed, then we recommend sticking to the Bondi 7.

If a carbon-plated shoe sounds like something you’d like to try for the performance-enhancing, speed-boosting aspect, then there are better options out there.

Die-hard Bondi fans may want to add this shoe to their collection just so they can say they have it. If you have the cash to spare, it’s worth a try.

Hoka One One Bondi X Stats

Hoka One One Vs On Running – Which Is Right For You?