***All versions of the fenix 3 (including the fenix 3 HR) are now on sale. Check the price on Amazon here!***

Big, bold, beautiful. With a price tag to match its size and style, the fenix 3 – Garmin’s latest version of their popular running/hiking/multi-sport GPS watch – arrives in a package that looks as great in the office as it does on the trail. Let’s dive in to find out what’s new in the Garmin fenix 3 and see if it justifies its high cost…

The fenix 3 is comes in three versions: the standard fenix 3, the fenix 3 Sapphire, and the fenix 3 HR. We’ll cover the first two in this review and go over the HR version separately.

To start, the fenix 3 has gotten a stylish overhaul on par with fashionable men’s** watches. This is especially true with the fenix 3 Sapphire models – these look almost too nice to sweat on. But one of the unique things about the fenix 3 is that it’s one of Garmin’s few watches meant to serve both the hard-core athlete as well as the casual weekend warrior.

**There is one fenix 3 with a sort of feminine-style (not trying to gender stereotype here) that’s has a white band with a pink bezel, but really Garmin is targeting men with this watch.

The Sapphire model differentiates itself with a scratch resistant, domed sapphire lens. In addition to being scratch resistant, the sapphire lens is less likely to shatter or crack and is easier to read in direct sunlight. The fenix 3 Sapphire also ups the ante with leather, titanium, and metal bands. It’s these upgrades which shift the fenix 3 towards a more-fashion-less-function watch for everyday wear.

The price for this added styling and sapphire lens? An extra $100 (or in the case of the titanium version, an extra $300!!). Is it worth the extra cost? If you’re going to consistently use it as a running/cycling/swimming watch, I’d buy the standard fenix 3. As an everyday watch with less frequent outdoor use – then it’s worth splurging on the fenix 3 Sapphire.

Physically, the fenix 3 is hefty. At two inches in diameter and weighing 3 oz** (except for the Sapphire Titanium version which weighs 4.8 oz – about 60% heavier than the standard fenix 3!), you’ll notice the watch on your wrist. It takes some getting used to, but I haven’t found it to be a problem. That said, my wrists are about average – people with thinner wrists might have an issue. Compared to the fenix 2, the fenix 3 is basically the same weight and height.

**For reference, a standard men’s fashion watch weighs about 3 oz. A fancy watch like a Rolex weighs about 4.5 oz. The Apple Watch weighs between 2.2 and 3.6 oz depending on band choice. And the Garmin Forerunner 920XT weighs 2.1 oz.

The fenix 3 comes with a color screen and a high resolution display. The resolution is nearly 3-times better than the fenix 2 and very close to what you’d find on the Apple Watch. This crisp resolution allows the fenix 3 to display standard numbers as well as sleek graphics. 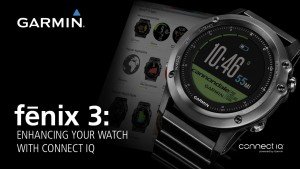 This segues us into Garmin Connect IQ. The fenix 3 is compatible with Connect IQ, Garmin’s new 3rd party app platform. Meant to compete with Suunto’s uploadable apps, Connect IQ is like an app store for Garmin watches.

Apps allow the fenix 3 to do new functions it can’t do out of the box. Like this Gym Timer that creates new types of timers for gym/crossfit type workouts. 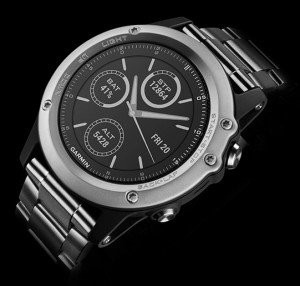 Watch faces are different ways to show the time – many of them recreate analog watches.

And widgets are apps that connect a smartphone to the fenix to receive various notifications like weather updates.

Right now, all apps are free. And it’s still a fairly new service. App quality and usefulness seem to range from terrible to above average. Hopefully, this improves as more (and better) apps are built.

Battery life is still awesome: 20 hours in activity mode; 6 weeks for everyday use. This remains steady with the fenix 2. One notable difference is the fenix 3 is now waterproof up to 100 meters (vs. 50 for the fenix 2).

An interesting new feature is GLONASS compatibility. GLONASS is a Russian-developed satellite positioning system that operates in the same manner as GPS. The advantage of GLONASS is that when it’s used in conjunction with standard GPS, it’s theoretically more accurate than GPS alone.

While we’re on the subject of accuracy, the fenix 3 has been dogged with reports of inaccurate distance and pace tracking, especially in heavy tree cover or near tall buildings. In some ways, this isn’t fair as all GPS watches don’t perform well in these situations. But users are reporting the fenix 3 is worse than other watches. My best recommendation is to ensure GLONASS is turned on and to keep the fenix set to 1- or 2-second data tracking.

Something I personally like is the auto-sync feature. No longer do you need to plug-in and sync your watch to upload data. It’s done via Bluetooth to a mobile phone or using Wi-Fi on a laptop or desktop PC.

In terms of new software features, there are some modest additions but many of the features have been carried over from the fenix 2. Here’s a brief overview on the new features:

Activity Tracking. Like many of Garmin’s newer watches, the fenix 3 comes with a built-in activity tracker. It counts steps, creates daily step goals, gives you get-off-your-butt reminders, and monitors sleep (although I can’t imagine sleeping with such a heavy watch on). Activity tracking might seem like a throw-away feature, but I do find that repeatedly walking – or at least getting up from a sitting position regularly – does help with my endurance performance. That’s purely my 2-cents but I think activity tracking is a worthwhile feature.

Swim Workouts & Multiple Bike Profiles. The fenix 3 made a couple small improvements for triathletes. It now includes swim workouts. So you can create specific swim workouts, very similar to what’s been available on Garmin Swim-specific watch. It can also be programmed with multiple bike profiles. So if you own several bikes – and use them with Garmin’s cadence sensors – the fenix 3 remembers each bike individually – useful if your bikes are different sizes.

Music Control. If you listen to music on a smartphone, the fenix 3 can remotely play, pause, and skip tracks (it can also control volume on certain Android phones). This is similar to what the Magellan Echo offered.

Find My Phone. The fenix 3 also comes with a “Find My Phone” function. When engaged there will be an audible sound from your smartphone along with a hot/cold gauge on the watch display. It won’t work for long distances like the iPhone app – it’s more useful if you misplace your phone inside your house.

PRs. The fenix 3 remembers personal records. To me, this is kind of a kitchen-sink type feature. Most people probably already have personal records (which the fenix 3 won’t know already – it only remembers PRs you do with the watch), so I don’t see this as very useful.

Golf. The fenix 3 comes with some golf features. Admittedly, I’m not much of a golfer – and clearly this feature is geared for the casual everyday wearer – however, it does add to the overall scope of the fenix 3. Specifically, the fenix 3 will measure shot yardage and give yard distances to dogwoods, layups, and different points on the green. The fenix 3 will also digitally track scores. I should also mention that courses need to be individually downloaded to the fenix to take advantage of these features.

Paddle Sports. The fenix 3 can track metrics for canoeing/kayaking/rowing as well as SUP (Stand-up Paddleboarding). It can track stroke count, stroke rate, and measure distance per stroke.

Existing Features from the fenix 2

The fenix 3 is one of Garmin’s most robust GPS watches. Let’s cover some of the features carried over from the original fenix and fenix 2:

Smart notifications: Stay on top of texts and emails when you pair the fenix 3 with a smartphone (and keep them in close proximity). Notifications and texts can be read on the fenix 3 as they are received.

Bluetooth: Upload your workouts onto Garmin Connect through a compatible smartphone. This goes hand-in-hand with the new Wi-Fi compatibility feature that let’s you auto-upload to a PC.

Vertical Speed: This monitors how fast or slow you’re moving vertically up or down. Comes in handy for downhill skiing or snowboarding.

Altimeter: Used for tracking elevation – much better than the GPS elevation found on many other Garmin watches.

Temperature sensor: The fenix 3 displays temperatures through a built-in sensor or (even better) with a sensor called the tempe that attaches to your clothing or pack. The tempe won’t give distorted readings from body heat that occur with the built-in sensor.

On-screen Breadcrumb map and huge waypoint storage: Create a route, upload to the fenix 3, then use the map on the fenix 3 to see where you are in relation to where you’ve been. Waypoints can be added both ahead of time or on the fly. Mark important spots to easily find them again.

Track Back: This function can help you find your way back to where you started. An arrow will point you in the direction to go as well as how far you are from the start.

Auto-lap and auto-pause: Laps will be auto-created at a distance of your choosing. Auto-pause stops the watch automatically when you stop.

Ski/snowboard mode: Similar to auto-pause and auto-lap, the fenix 3 can detect when you’re skiing/snowboarding vs. riding the chairlift, then auto-pause on the lift and mark a lap accordingly.

Live Tracking: Friends and family can track you in real time when you pair your phone with the fenix 3.

The Garmin fenix 3 is one of the most ambitious GPS watches on the market. It has tons of features, strong battery, and looks great. This is an awesome watch and I’d definitely recommend it provided a) the cost doesn’t scare you off b) you don’t mind wearing a large, heavy watch and c) you’re going to use most of the features – any watch with this many features can be complicated to use.

Sometimes jack-of-all-trade watches do a lot but don’t do a lot of it well. In this case, I think Garmin has pulled it off. The watch looks great and has the features to match.

***All versions of the fenix 3 (including the fenix 3 HR) are now on sale. Check the price on Amazon here!***

PROS:
CONS:
WHO SHOULD BUY THIS WATCH
Runners

The fenix 3 equals Garmin’s running watches (the Forerunner 230/630 series) in its running features. It’s got a great battery-life; however, some runners may find the additional weight distracting.

Feature-wise, it’s great and just as good as Garmin’s other GPS watches. The downside is there is no easy way to mount it to a bike (unlike the 920XT which has a quick-release to mount on handbars).

Excellent. The fenix 3 is water-resistant to 100 meters and has all the same features as Garmin’s swim-dedicated watches.

Vertical speed and the auto-pause and auto-lap for each ski run make this a great choice for downhill skiers and snowboarders.

Navigation features and the long batter life make this a nice watch for runners going all day and night.