Home » Triathlons » What Is The Event Order Of A Triathlon?

What Is The Event Order Of A Triathlon?

What is the event order of a triathlon and why is it done that way? You can’t just decide which of the three disciplines you want to do first; there’s an order and you have to stick to it!

First comes the swim, next up is the bike leg, and it finishes off with the run. If you’re a runner who’s just branching into triathlon, you’ll need to become proficient at the first two so that you’re still fresh by the time your run comes around.

Here’s all you need to know about the various stages of a triathlon, why they’re set up that way, and how to make the most of them. 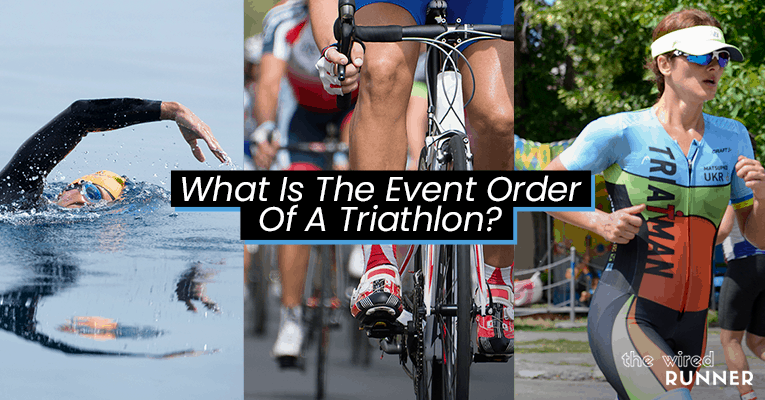 What is a Triathlon?

Just to clarify, a triathlon is an event that consists of three different sporting disciplines. Each sport is done immediately after another, all within the same event.

There are a whole lot of different triathlon variations. But the most common, and the standardized competitive event, uses the swim-bike-run format.

What is Triathlon’s Fourth Discipline?

Yes, there’s a fourth element to a triathlon! No, it’s not a sport. Something that needs as much attention as the three sporting disciplines is the transition – in other words, the switch between sports.

The transition between the swim and bike ride is known as T1 in official triathlon circles. The second transition, between the cycle and the run, is called T2.

Fumble around during your transition and you could end up adding a good minute or two to your final time.

On the other hand, if you have a strong and organized transition, you could save yourself a couple of minutes. This could be the difference between missing and making a new PR!

It’s worth giving your transitions as much attention as you do your sports during training. Yes, practice your transitions! The smoother you can get them, the faster your end time will be.

We suggest practicing for good reason. It’s not a case of just running out of the water, hopping on your bike, and heading off. Or jumping off the bike and hitting the ground running.

There needs to be a change of clothing, a change of shoes, and getting your equipment and accessories on.

For example, you won’t be swimming with your shoes on. Some of your transition time during T1 will need to be set aside for putting your cycling shoes on before you get on the bike.

If you make the mistake of doing half a job, you could suffer the consequences later, like a stray loose shoelace getting stuck in your bicycle chain!

Triathlons began in France, as far back as the 1920s! The three disciplines were running, cycling, and canoeing. A little different from today!

The first modern-day triathlon took place in California in 1974. The legs consisted of running, cycling, and swimming. In 1978, the first Ironman event was held in Hawaii, and used the now-standard swim-bike-run formula.

What is the Order of Events in a Triathlon?

As we’ve already mentioned, the standard triathlon order (ie. those held under USA Triathlon and similar organizations) begins with the swim, moves onto cycling, and ends with the run.

Why is This the Order in a Triathlon?

This order hasn’t just been chosen at random! There’s a good reason behind it, and it’s all about safety and convenience. 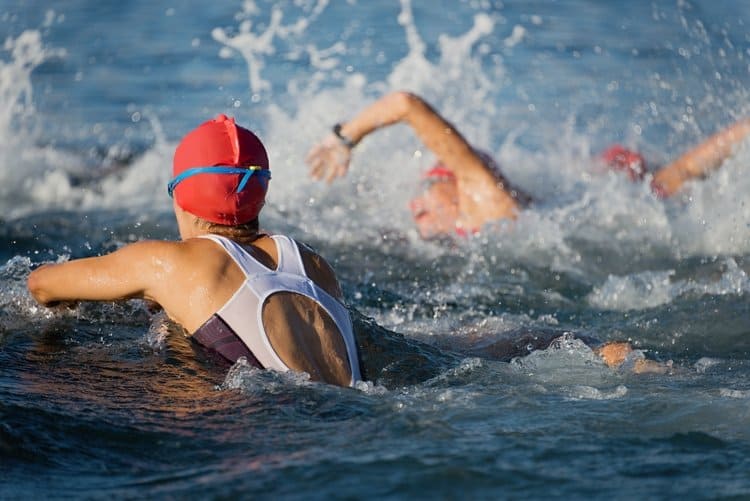 Have you ever thought that it would make sense to have the swim leg last so that you can cool off after swimming and running? Well, that would work but it could leave athletes open to danger.

Have you ever tried swimming when you’re completely physically exhausted? Probably not, because, you know, drowning.

When you’re out on the open water during a triathlon, you can’t just swim to the side and rest for a bit if you’re feeling tired.

With that in mind, it makes perfect sense to have the swim leg first. You’re fresh, feeling strong, and aren’t susceptible to the life-threatening danger that could come with exhaustion.

If you’re wearing a wetsuit (which is compulsory in some cases), it takes much longer to get it on than it does to take it off.

Having the swim leg first means you’re free to take your time putting your wetsuit on, and you won’t waste precious time stripping it off during your transition.

During the biking leg, it’s not just you. It’s you and your bike. Chances are you’ve spent a good bit of cash on an excellent triathlon bicycle, which probably also includes equipment such as aero bars and a high-performance wheelset.

The last thing you want is to be involved in a crash that has the potential to both injure you and wreck your bike.

Swimming is first for a good reason. So biking has to be second or last. The problem with leaving the cycling until the end is that athletes are more exhausted at the end of the race than they are halfway through the race.

With exhaustion, the chance for crashes to happen increases. This is especially common in the final miles of the race, as cyclists are pushing hard to sprint the last bit of the leg.

It makes sense, then, from a safety perspective, to have the cycling leg second.

Drafting is when a cyclist rides directly behind another one, in order to take advantage of the reduced air pressure. It’s allowed in some races (like ITU races) but not in others (for example, Ironman).

For those that allow drafting, it’s as much an exciting spectacle for the viewers as it is a strategic move for the racers. Putting this upfront would eliminate the excitement or the need for such a strategy.

For non-drafting triathlons, it still wouldn’t make a lot of sense to have the bike leg first. Apart from anything, it would make it more difficult to have a standard order for triathlons if drafting and non-drafting events chose different orders.

Imagine the space you’d need for thousands of athletes to gather at the starting line with their bicycles!

It makes a lot more sense to start with an event that doesn’t require that kind of space, and “store” all the bicycles in the transition areas until they’re needed.

There’s also a safety aspect to this. As the athletes come out of the water, they’ll be heading off on the bikes in a staggered fashion. 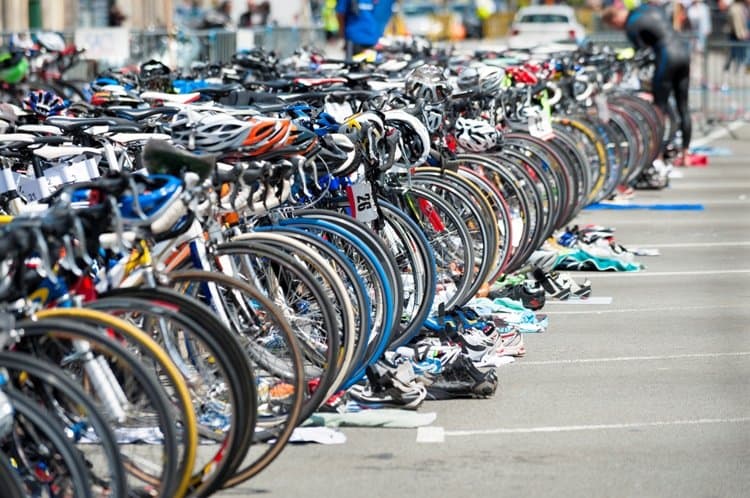 Instead of having a huge group of people trying to ride in a crowd, which increases the chance of crashes, injuries, and chaos, there’ll be only a small number of people heading off on the bike at any given time.

Having to wait for every cyclist to finish their full race (ie. if cycling was last) would keep roads closed for extended periods of time.

It’s not difficult to see why the running leg is best held last. As you near the end of your triathlon event, you’ll be starting to fatigue.

If you need to stop and rest for a moment, it’s much easier to do that when running than swimming or cycling. In serious cases, if you need medical assistance, it’s far easier for the medics to reach you and help you on the spot.

If you’re feeling intimidated after reading all this and worried about heading into your first triathlon, there are other options that may be easier to ease you into.

The duathlon consists of only two events – running and cycling. There are still three legs, though.

Participants begin with a run, move onto cycling, and then finish off with another run. If you’re a weak swimmer or a strong runner, it may be a good idea to start with a duathlon.

You can also get used to transitioning without the stress of wetsuits and water.

If you would prefer to avoid cycling, an aquathon could be for you. There are only two sports in this event – swimming and running.

It’s ideal for athletes who are looking for a challenge but don’t have a high-quality bike (and aren’t going to be investing in one).

If you despise running, the aquabike event could be ideal for you. You’ll do a swimming leg and a cycling leg, no running at all!

If you suffer from joint pain or chronic injuries in the feet and legs, this could be a good choice. Both swimming and cycling are low-impact sports. There’s no need to give up competitive sport if you have joint trouble!

If you enjoy getting off the beaten track instead of running or cycling on the road, try a cross triathlon!

You’ll start off with the swim like a normal triathlon. But instead of biking and running in the streets, you’ll do a mountain biking trail and a trail run.

This is an excellent choice for adventurous athletes, or seasoned triathletes who are looking for something fun, different, and challenging.

There’s no swimming in this event, just a rugged mountain biking trail and a nature-filled trail run.

Don’t have a bike but you’re looking for a challenging event? Try a Swim Run!

Athletes will begin with a swim, and then move into a run. From there, they’ll go back into a swim. 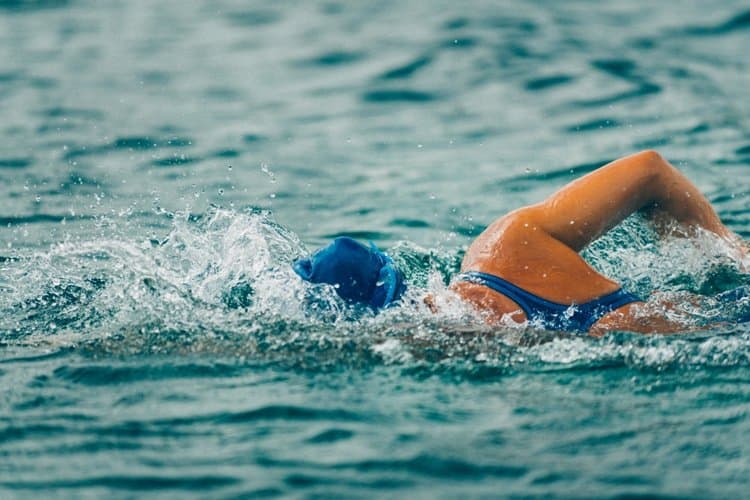 Depending on the length of the full race and the duration of each leg, there could be three, five, or even seven rounds.

If you live somewhere that snows, you can do a winter triathlon! Obviously, swimming is out of the question in this case, so it’s replaced with cross-country skiing.

Participants start with a run, then do a mountain bike trail, before heading into the cross-country skiing leg.

Make sure you’re adept at skiing before attempting this, though!

Distances can also vary depending on what kind of triathlon you’re doing. It’s worth double-checking your event before starting, though, so you’re never caught unaware.

Here are the most common distances you’ll find (in both miles and kilometers!).

This is the most common distance you’ll find in triathlons. It’s become the standardized distance for the event.

If the standard triathlon is a little too easy, a middle-distance triathlon might be a good challenge for you!

If you can comfortably run 20 miles, then this might be a good length for you. Ensure that you can manage the biking and swimming distances, though.

If a standard triathlon distance is a little too long for you, a sprint-distance triathlon may be the best choice for you.

It’s an excellent way to start getting used to the workings of a triathlon so you can operate efficiently in a full-length event.

The super-sprint distance is the shortest one you can find. It’s perfect for beginners who want to get a good feel of the event.

The Ironman is not an event to be taken lightly! If you can comfortably complete a long-distance triathlon, then the Ironman may be the next step.

If you’ve never completed a long-distance triathlon, don’t even contemplate an Ironman! It’s something you need to work up to, but it’s a worthy bucket list item.