Energy Gels Vs Sports Drinks – Which Is Better?

We’ve all had that moment. You’re three-quarters of the way through a race you’ve been training for, and bam – your energy disappears.

If you don’t have some easy-access, quick-absorbing carbs with you, you’re left staggering to the finish line in pain! Bonking, cracking, hitting the wall – whatever you call it, it’s a situation every runner tries to avoid.

Thankfully, athletes, trainers, and scientists have figured out a few ways to fix this issue. Energy gels, chews, and drinks have become an important part of runners’ nutrition and performance.

If you’re looking for the most effective and efficient way to “beat the bonk,” you’re most likely considering energy gels and sports drinks. And you might wonder whether one delivers more benefits.

In this article, first, we’ll go over sports drinks. Then, we’ll move on to energy gels.

Here’s what we know so you can choose the right energy-boosting method for you. 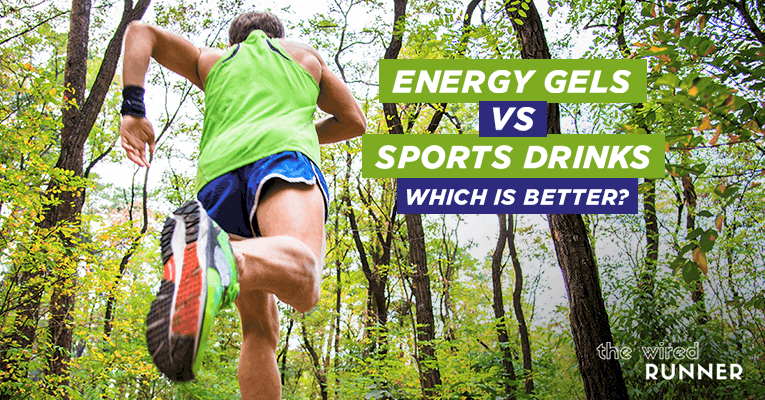 What are Sports Drinks?

Sports drinks are beverages that contain high levels of carbohydrates and sodium. Some contain other electrolytes, and others even have high levels of protein. The original sports drink, Gatorade, was developed at the University of Florida to help football players replenish nutrients lost from sweat.

There are many more options today. They’re all a quick and convenient way to replace both fluid and electrolytes that have been lost during exercise. Most of them come in powder form, so you can simply add a scoop to your water bottle while you’re running.

It’s super important to note that true sports drinks are not packed with sugar. Although they do contain carbohydrates (often a variety of sugars), it’s at a healthy level. High amounts of sugar (like that in energy drinks) tend to give a short high and a nasty crash!

Sports drinks do give you a carbohydrate boost, but they usually focus more on replacing electrolytes. Often, they contain caffeine as a way of boosting energy, rather than sugar.

How Many Carbohydrates are in Sports Drinks?

If you want a higher carbohydrate content, you can try a concentrated sports drink mixture where you can control the concentration yourself.

Some sports drinks have almost no carbohydrates at all but focus on replacing electrolytes rather than carbs. These are typically much lower in calories.

Keep in mind, though, that during a race, you won’t be consuming a full serving all at once. You’re more likely to drink an ounce or two here and there. Water stations typically provide cups with about 3 oz. of fluid – far from a full serving.

How Many Carbs Do I Need In a Sports Drink?

The carb content you choose should depend on a few things.

Number one, your unique needs! No two runners are quite the same, and what works for one may not work for another.

If you prefer running fasted, then choosing one with fewer (or no) carbs is the way to go. If you aren’t worried about calories and would like an extra boost, added carbs could be helpful for you.

Number two, the duration of your run. Runs longer than 90 minutes may need carbs to maintain your effort. Runs between 60 and 90 minutes usually just call for electrolytes.

It’s worth experimenting a little to find what’s right for you.

How Much Sodium Should They Have?

There’s no right or wrong figure with regards to how much sodium should be in a sports drink. But if you’re looking for something that will effectively replace the sodium you lose when sweating, find a sports drink with around 50mg of sodium per 100ml.

Some runners will be fine with less. You could start off with a lower-sodium choice, and if you feel it didn’t help as much as you’d have liked, you can find another drink that has an increased sodium count.

As well as a good sodium count, a sports drink should also contain a decent amount of potassium. Your potassium count can be severely depleted when you sweat, which leads to stomach troubles, lack of energy, and possibly cramps.

If you sweat a lot when you run, you’ll need to choose a drink that’s high in both sodium and potassium in order to perform well on the road.

How Much and How Often Should You Consume Sports Drinks?

When running long races (over an hour), you should be taking in 4 to 8 ounces of fluid every 20 minutes. Staying on the lower end of that range is probably smarter – 24 oz of fluid per hour, while running, is more than most stomachs can handle. The exact number will depend on the runner, so you may need to experiment a bit to find out what works best for you. 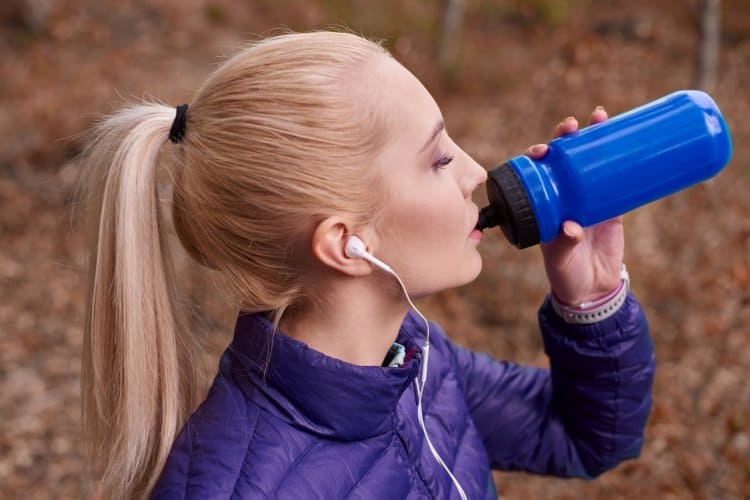 Studies have even shown that simply rinsing your mouth with a sweet sports drink provides a boost. That is, you might not even need the fluid at all. Just a little taste has a positive effect.

If you’re running for less than an hour, you can get by with just water, as your electrolytes won’t be as depleted and you can refuel after your run.

You can make use of powdered energy drinks every time you run. These are not the same as “energy drinks” that you find in any store’s refrigerator.

While there’s nothing wrong with partaking in one of these drinks every now and then, we recommend not using them to enhance your performance. They’re loaded with sugar, which will give you a short boost that’s not worth the following crash.

If you’re using the correct type of energy drink (a powdered carbohydrate and electrolyte mix without tons of sugar) you can use them as often as you need to during your run without fear of negative results.

Powdered sports drinks are a highly useful tool if used correctly. Here are some of the benefits to using sports drinks when you run:

One of the best things about sports drinks is that they’re easy to choose and modify to suit your particular needs. Carbs, no carbs, high sodium, moderate sodium, high potassium… There’s something for everyone.

If you need to, you can always dilute it more than recommended to lower the numbers of carbs or electrolytes. Or, you can add two instead of one packet to your water bottle, if you’d prefer more.

Most sports drinks can be bought in bulk (in a tub or tin), or in individual sachets.

Buying in a tub typically reduces the cost per scoop, and it’s convenient for home use such as training on a treadmill.

Individual sachets are great for taking along with you on the road so you can use them when and if you need them. They’re also perfect if you’re traveling and wish to take a few servings along in as small a space as possible.

If you struggle to increase your carb intake because you fill up too quickly, carb-rich sports drinks can be a way of boosting your carbohydrate intake without feeling overly full.

Sports drinks can be considered to be an “all-in-one” supplement for using on the go. They not only replenish your carbs and electrolytes, but they also help rehydrate your body as quickly as possible.

What are Energy Gels?

Energy gels are small packets of a gooey gel substance. They’re usually sweet and sticky, and come with a single serving in a small, easy-open packet.

They’re packed with carbs, and most contain a mix of glucose and fructose. A lot of them also contain caffeine, for an extra energy boost. They come in a large variety of brands, and a huge range of flavors, so there’s something for almost every runner. 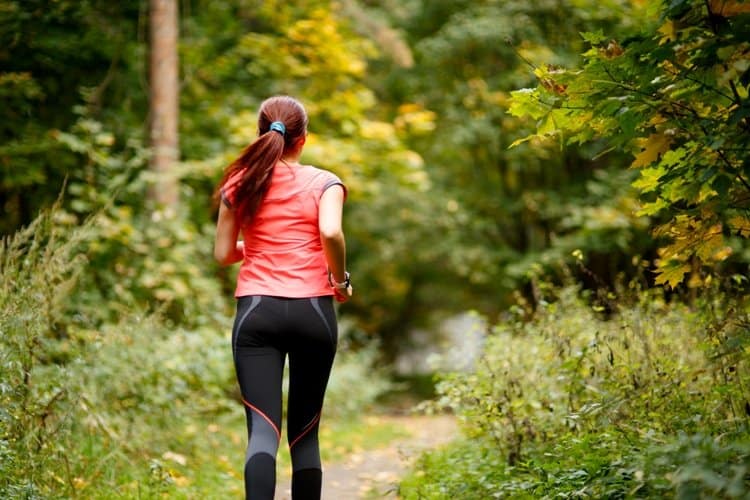 Their small size makes them super easy to carry in a pocket or running belt to give you a fast-acting carbohydrate boost when you need it most. Way better than trying to fit a banana into your running belt!

How Many Carbohydrates are in Energy Gels?

Every energy gel is different, but most of them have 20 to 30 grams of carbs in them.

You won’t usually find any fat or protein in an energy gel. Most contain sodium or perhaps potassium, but generally, they’re used for carbs and not for electrolytes.

Energy gels are extremely easy to carry around with you. You can slip a few into a pocket, stick them into a running belt or backpack, or even tape or tie them to a bicycle frame!

They’re much easier to carry around for easy carbs than real food. If you’re running, it’s hard to carry fruit or a sandwich. You can’t just stick a sandwich into your belt (or even a backpack) without it possibly getting squished (or soggy).

An energy gel is also a great way to get a quick caffeine boost. Caffeine content varies widely by gel, but if you find one that works for you it’s also far easier than trying to down a cup of coffee while you’re jogging!

The texture of energy gels can be problematic for some runners. Some may struggle to get them down, and others may just have a bad tummy reaction to the carbohydrates or caffeine.

If you’ve had a bad stomach experience with gels, don’t give up on them! All you need to do is find a gel that’s easier for your stomach to absorb.

You may see the words “low-osmolality” on a product, which means it’s less concentrated and less likely to cause you digestive troubles.

Don’t forget to hydrate! Many gels recommend about 4 oz of water with each gel. Some runners even just dissolve their gels straight into their water bottles for ease and exactness.

Gels consumed by themselves without water are more likely to cause gastrointestinal problems, as they’re more concentrated and harder for the stomach to deal with. It’s also harder for your stomach to absorb the sugars.

In the end, if you need an extra boost while you’re running, both sports drinks and gels are effective.

The right one for you will depend on what exactly you want to ingest when you need that boost.

Sports drinks are a more all-in-one, carb+electrolyte boost (if you choose the right one). Energy gels are more of a carb boost and don’t contain electrolytes at all.

Ultimately, the one you choose is up to you! If you’re new to either one of them, we recommend giving them both a try and assessing which one works best for you.