Home » Training » The Difference Between Cycling Vs Running Power Meters

The Difference Between Cycling Vs Running Power Meters

If you’ve been in the running, cycling, or triathlon world for any length of time, chances are you’ve heard of power meters. Maybe you already use one. Or perhaps you’re looking into buying your first one.

Your next question may be about whether you should invest in a cycling power meter or a running power meter. They’re fairly different devices, and one can’t do the other one’s job.

So what’s the difference between cycling vs running power meters and which one should you choose?

Here’s what you need to know about them and which one we suggest buying. 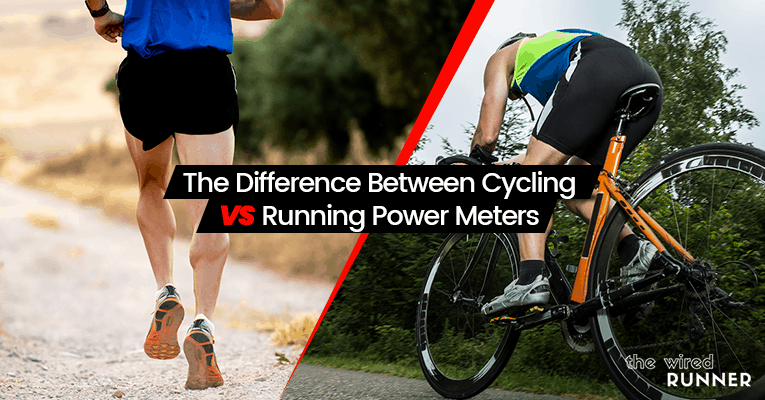 What Does a Power Meter Do?

A power meter measures how much physical work you’re doing (how much effort you’re putting in), and how quickly you’re doing it.

Scientifically (although in simple terms), power is the amount of force that’s exerted over a certain period of time. In other words, the physical effort you’re putting in (force) and how quickly you’re working (time or, more correctly, velocity).

The power meter, whether you’re using a running or a cycling one, measures this metric in watts.

This can be super useful for those athletes who keep track of and use their data for training purposes.

You’ll be able to understand at which points of races your power weakens and when you need to put in more effort to avoid losing time.

You’ll also be able to track your improvement and see how your power metric increases with training and consistent work.

If you use the wrong one consistently, you’ll be able to see an improvement in your power. But it won’t give you accurate numbers for the activity you’re doing.

How Does a Running Power Meter Work?

Your running power meter accounts for all three of those movement types as it measures your force and velocity. It uses all this data to put out a number in watts, which is a measure of how much energy you’re putting into moving.

Take note that the number your power meter displays is fairly subjective. If you weigh 10 pounds less than your running buddy, you’re going to need fewer watts than he or she does to move at the same speed.

For this reason, it’s best to not compare yourself to others when measuring your power as a metric. The better metric (in running to a degree, but more so in cycling) is your power-to-weight ratio. 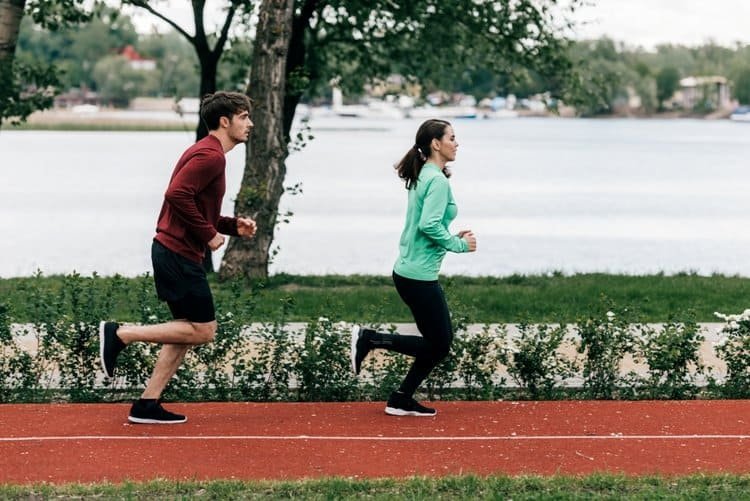 Therefore, you can’t assume that X watts is a great number to be hitting. For you, it may be. For your running buddy, it may seem like it isn’t. In the end, it all comes down to the power-to-weight ratio and what your goals are.

What Types of Running Power Meters Are There?

Most running power meters are pods that you attach to your shoelaces. This particular position gives the best indication of your power as your feet are the things that contribute the most to your movement.

These foot pods deliver your data to an electronic device, which could be your smartwatch, smartphone, or a training platform like Training Peaks, SportTracks, or Strava.

Some watches come with built-in power meters. These are few and far between, though and generally aren’t quite as accurate as those that work with the feet.

Watches that include a power meter function are:

Note that the Garmins need a chest strap or a run pod sensor to work. If you’d prefer to try a foot pod, you could invest in the Stryd or RunScribe Plus.

What are the Benefits of a Running Power Meter?

If you don’t have a power meter, you don’t necessarily need to run out and grab one. But there are certain advantages to using one, especially if you want to use your metrics to improve your performance.

Monitoring your power can help you to:

If you want to improve your power, you’ll most likely start looking into things like cadence, ground contact time, and arm swing. All of these things can have an effect on your running form.

Tracking your power can help you identify small issues with your form. If you’ve been tracking it for a while and it’s not quite where it should be, it may be time to look more closely at your form.

Thankfully, intentionally practicing your running form isn’t difficult. If you realize your form is a problem, spend around a mile every running day intentionally working on it.

Things to consider are:

If you aren’t quite sure how to get all of this right, you could always hire a coach or invest in a reputable running technique course.

If you’ve been training hard but your power seems to be decreasing, it could be an indication that you’re fatigued and aren’t recovering as well as you should be. 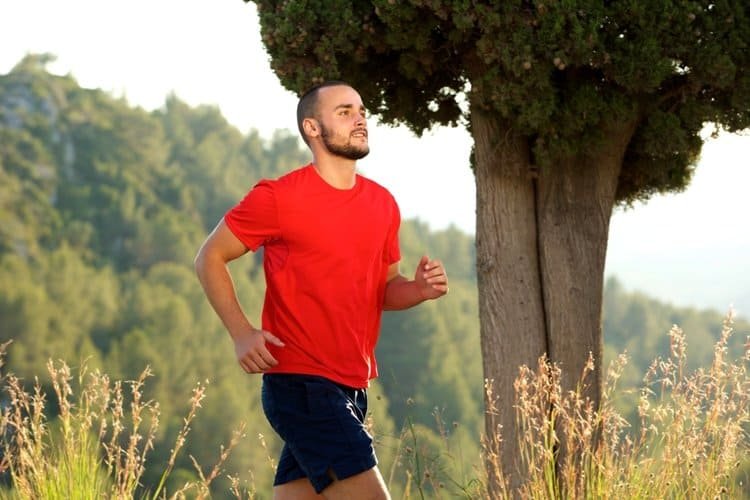 Listen to your body! If your power is low, take a break and focus on recovering fully before you keep pushing hard.

If you’re recovering from an injury, monitoring your power can help you to know how far along the road to recovery you are.

This can help you not to push yourself too hard and aggravate the injury, possibly adding more recovery time.

Some runners pace themselves fairly easily. Others struggle with it. If you’re one who needs a bit of help, monitoring your power can help.

For this, you’ll need to work out something called your Functional Threshold Power (FTP), which is the maximum power output you can maintain consistently for a full hour.

Here’s how to do that:

So how do you use this to pace yourself? Once you know what power you can comfortably sustain on flat surfaces, you can work out an appropriate power to stick to throughout your race.

If your FTP is 240, you’re not likely to be able to stick to that throughout a hilly race. By maximizing your power in flat areas and lowering it slightly on hilly sections, you can maintain a fairly average power throughout your race.

Monitoring your power can be an excellent indication of overall fitness levels. The fitter you get, the better your power output is likely to be.

Keeping all this in mind as you go through your training can help you understand how your general fitness level is improving.

How Does a Cycling Power Meter Work?

But it does use a slightly different algorithm because cycling and running aren’t quite the same kinds of movement.

Cycling includes a rotation as you pedal, which running doesn’t. So the “force” part of cycling measures torque and its rotation. Like running power meters, it displays a measure of your physical effort in watts.

Cycling performance is more affected by wind and aerodynamics than running is. This means the effort applied can change somewhat more than during running.

Also, because cycling power meters are fitted directly to the bike and aren’t attached to the body of the cyclist, they don’t account for any waste of energy through unnecessary side-to-side or other body movements. 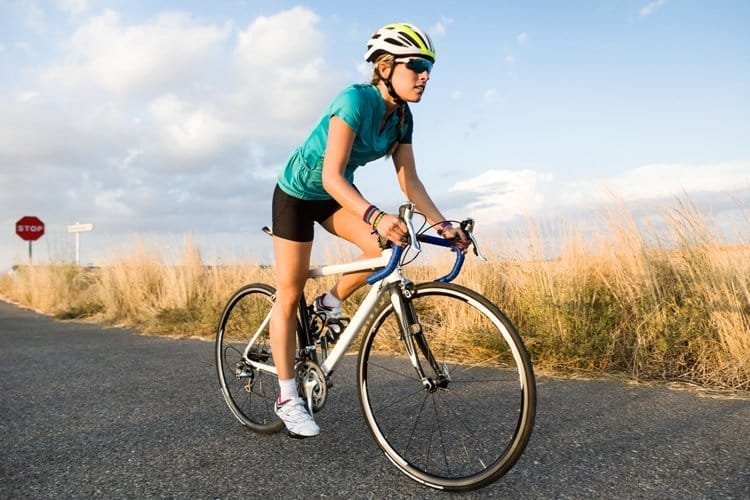 They simply measure the amount of power being put through the drivetrain. For this reason, it’s a little harder to use a cycling power meter to pick up on issues with your cycling form.

What Types of Cycling Power Meters Are There?

These kinds of cycling power meters are known as the most accurate. The chainring is directly responsible for your bicycle’s movement, so there’s little room for discrepancies.

This power meter completely replaces your bike’s current chainring and crankset. They can be a little difficult to install, so if you’re new to them you may have the best luck getting it professionally installed.

These kinds of power meters are also often the most expensive type. But once they’re integrated with your bike, you won’t find a more easy-to-use one.

Crank arm-based power meters are also fairly accurate, as they’re located as close as can be to the drivetrain. Like the previous type, this power meter replaces the existing crank arm on your bike.

It’s a simple and easy-to-install option. Typically, they only come in singles, for one side of the bike. This shouldn’t affect your readings at all, though.

Replace your pedals with pedals including a built-in power meter. You can buy just one (a little less accurate), or you can get two and replace both your pedals.

They’re the easiest type to install and can be moved quite easily from bike to bike, unlike others.

Spider power meters are the oldest type and were considered to be the gold standard at one point!

The spider is where the chainring bolts onto. It’s considered to be the “heart of the bike”, and it’s extremely well-protected so your device will be safe even in the event of a crash.

These kinds of cycling power meters are also extremely accurate and measure both left and right leg power.

What are the Benefits of a Cycling Power Meter?

Using a power meter is an excellent way to analyze your fitness, strengths, weaknesses, and set achievable goals.

Which One Should I Use?

If you’re a triathlete and regularly train for both running and cycling, we highly recommend getting one of each. It’s a little more pricey, but you can’t measure running power with a cycling power meter and vice versa.

Having both will allow you to make the most of both types of training. If you can only afford one, then go for the event that you prefer and enjoy training and improving more.