Home » Training » Can Running or Exercise Cause Spotting?

Can Running or Exercise Cause Spotting?

It can be shocking to finish a great exercise session and head to the changing room, feeling good, only to discover that you’re spotting. This can instantly cause anxiety!

Can running or exercise cause spotting, or is there another cause for concern? The good news is that spotting during or after running or other forms of intense exercise isn’t necessarily unusual. It happens to many women of all ages and can be caused by various underlying factors.

Let’s look at what exactly it is and how it can happen during your exercise session, so you can put your mind at ease. Spotting is light vaginal bleeding at any time outside your normal menstrual bleeding. We say “light” because the most common sign of spotting is exactly that—spots of blood that have been discharged during your exercise that you only notice later.

Heavy bleeding—similar to your typical menstrual bleeding—isn’t often referred to as spotting. A significant amount of blood is generally referred to as “bleeding” and may be more serious than spotting.

Spotting can be dark red, bright red, brownish, or pink.

Difference Between Spotting and Hematuria

It’s important to note that spotting does NOT come from the urinary tract. Blood in the urine is known as hematuria, and this is a completely different phenomenon from vaginal spotting.

Blood in your urine can be a sign of overtraining, but it’s more often a sign of an impending urinary tract infection, damage to the kidneys or bladder—usually as a result of blunt force trauma—or a side effect of certain medications.

Hematuria doesn’t usually cause spotting. In most cases, you’ll only notice the blood when you actually urinate. Conversely, spotting occurs during your activity and is immediately noticeable even before you urinate.

Who Is More Prone to Spotting?

Spotting can affect any woman. Outside of exercise, it’s more common in teens and pre-menopausal women.

In the context of exercise, it’s a little more likely to happen when you’re doing intense or high-volume exercise.

When you put these two together, teenagers and pre-menopausal women who do intense exercise are most susceptible to spotting.

But that being said, it is something that can affect almost any woman at any time, depending on a variety of factors.

Why Does Exercise Cause Spotting?

In most cases, the movement and friction of exercise are not what’s to blame for spotting during or after exercise. It’s more often a result of hormonal changes associated with the physical stress of exercise.

The hormones released during exercise can disrupt the hormones that regulate the process of building up and shedding the lining of the uterus.

While these hormones follow a very specific cycle normally—the menstrual cycle—exercise can cause them to accidentally signal the uterine lining to shed, causing spotting.

Causes of Spotting After Exercise

There can be a variety of different causes behind spotting. Here are some of the most common ones.

Near a New Menstrual Cycle

Ovulation occurs in the middle of the menstrual cycle—about 10 to 16 days after you have your period. Bleeding—or spotting—during this time is not unusual. In fact, it happens in 10 to 30 percent of women. 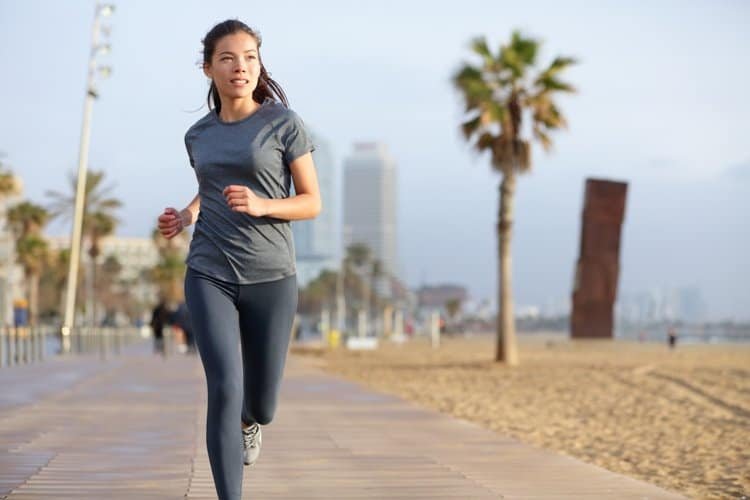 During ovulation, estrogen levels rise rapidly and then decrease rapidly, leading to an egg being released from the ovaries. This causes the lining of the uterus to become unstable, which can easily lead to spotting.

Daily stress increases the levels of cortisol in your body. High cortisol levels can lead to your regular hormones— often estrogen and progesterone—is being suppressed, which can also cause instability in the uterine lining, leading to spotting.

As you can already tell, hormonal imbalances can wreak havoc on your body. Aside from stress, there are many reasons your hormones may be imbalanced, including:

The hormonal changes associated with pregnancy could also lead to spotting. If there’s a chance that you may be pregnant, it’s wise to do a test if there’s no other logical reason behind the spotting.

If you’re already pregnant, you should see your doctor if you notice spotting. While it can be just a sign of hormonal changes, there’s a small chance that it may be an indication of a complication.

Your hormone levels begin to change as you approach menopause. This could lead to more frequent spotting during or after exercise.

If spotting occurs more frequently and you’re over 40, approaching menopause may be the underlying reason.

Infection in the vaginal canal or cervix can lead to spotting. It’s important to note that this is different from bladder or kidney infections that can lead to blood in the urine.

In most cases, an infection may be accompanied by pain, an odor, and fever. The fever can be mild or severe, depending on the severity of the infection.

Polyps are benign growths that can occur on the vulva or cervix. They are more common in women over the age of 40, and friction on these growths may cause breakthrough bleeding.

What To Do If You Experience Exercise-Induced Spotting Regularly

Experiencing spotting on occasion is usually nothing to worry about. However, if it becomes frequent and you have ruled out pregnancy, menopause, and a change in birth control, you may want to put some thought into why it could be happening.

You may want to consider your diet and whether or not you’re likely to have nutrient deficiencies. If you’re serious about your exercise, you may want to consult a dietician to ensure that you are eating correctly.

Take notes of changes in your lifestyle, such as starting new medications or a change in schedule or stress levels. If you can relate the spotting back to these occurrences, it can be easy to make changes to reduce the chances of it happening again.

When Should You Worry?

While running or exercise can cause spotting, and it’s not unusual, in some cases, it’s better to get it checked by a doctor. You should seek medical advice if: