Home » Training » Best Way To Listen To Music While Running

Best Way To Listen To Music While Running

We all know that music is very powerful. From invoking feelings of sleep for a baby’s lullaby to feeling like you’re back home on a dirt road with a country song, music moves us. And it’s especially powerful for running to get you pumped up and ready to perform at your best.

By the end, you’ll know everything that you need to know about the best way to listen to music while running for you! 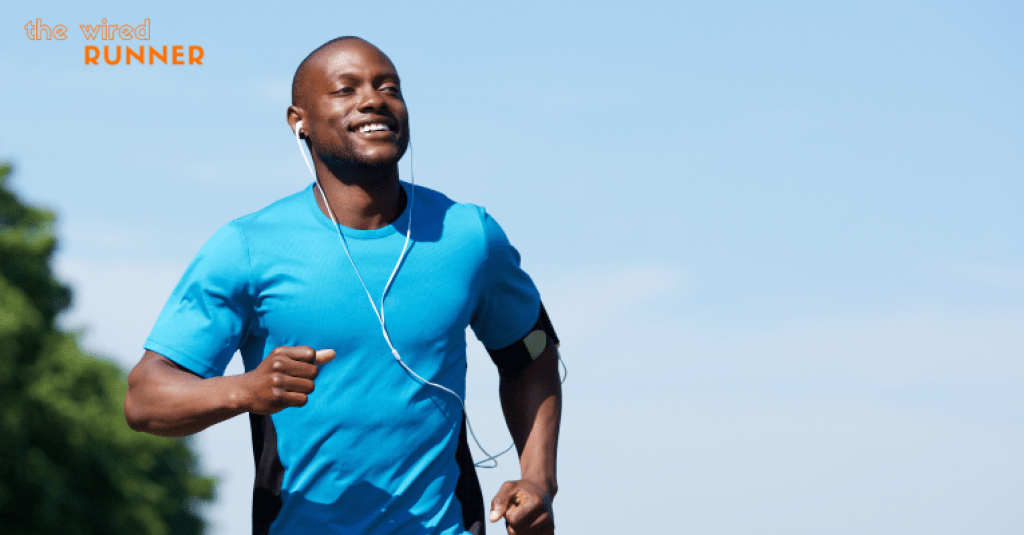 Benefits of Running With Music

Although there are definitely purists out there who prefer not to run with music, there are quantifiable and scientifically proven advantages to cranking out the tunes while running. Here are just a few reasons.

Studies and sports doctors confirm that running with music is a great way to get in a good mood for your training run. Even if you have a long run ahead during your training program, there’s a good chance that music will boost your spirits and optimism.

Because music reaches such a deep part of us, even if we don’t understand the science behind it, we just intuitively know that we’re happier when our favorite song comes on the radio, and you can channel that happiness on your run.

Distracts You From Discomfort During Your Run

This makes sense to all of us. Listening to your favorite songs during a hard workout will help you get through it because at least there’s one thing you like. But it turns out that according to one study, your body actually feels like it’s not working as hard when you’re jamming to your favorite tunes.

In other words, music doesn’t just distract you from discomfort. It will also make you run harder and faster, and help you improve more quickly. Pretty crazy, right? It also increases your chance of being in the zone, meaning that you’re more likely to reach a sense of “flow” and a runner’s high more quickly.

According to one journal, music will actually help you run better and recover faster. So if you’re close to PRing in one of your distances and haven’t been listening to music, pick up some headphones and a playlist. It could make all the difference.

Additionally, if you pick the right music (make sure that you have something upbeat when you start a faster bit of your run, for example), it can make a huge difference. My brother-in-law often selected music that would allow him to maintain the cadence he wanted to maintain.

Although the purists will tell you that they are more in-tune with their bodies since they don’t have the tunes, you can train yourself to run well and actually perform better than those without music when the beat of your music matches your cadence, according to one study.

Safety When Running With Music 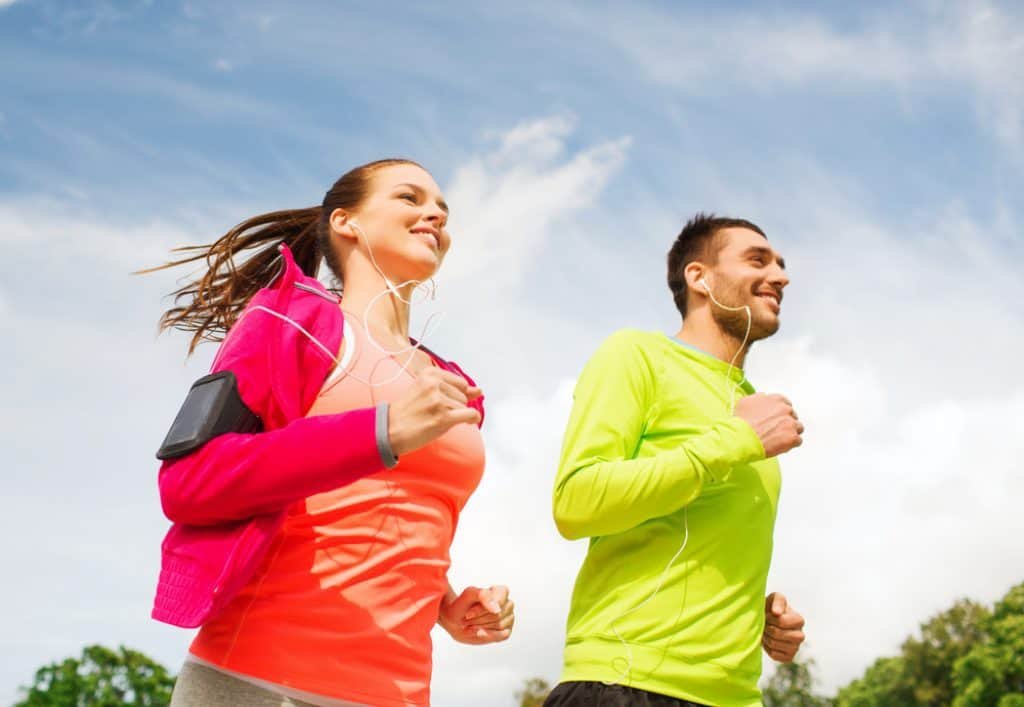 One of the biggest downsides to running with music is safety. When I asked one of my friends why to run without music, his first answer was “safety.” And while that’s harder to do when you’re listening to your favorite tunes, you still can be safe with these tips.

You should consider purchasing headphones that allow ambient noise, meaning that you aren’t blocked off from the world around you. While it might be nice to get in the zone and tune out everything around you, that’s not safe unless you’re running on a treadmill. Leave the noise-cancelling headphones at home and reach for a pair of bone conducting headphones instead.

Don’t completely tune out your environment, especially in cities or other high-traffic areas. Make sure that you can still hear what’s going on around you. Don’t jeopardize your safety just to feel more pumped up.

Keep Music at a Reasonable Level

It goes without saying that you should keep your tunes at a reasonable level. Think about what your mom told you growing up about what volume you should listen to. I know my mom always said that I should be able to still hear people around me.

That’s likely what you’ll want to aim for in terms of volume—something that your mom could be proud of. Plus, it is also more courteous if you’re going to pass people on the street. Chances are that they don’t want to hear your music too.

This might not seem like a big deal, but it’s really important. If there are a lot of people, cars, bikes, and so forth around, you’ll want to avoid the music and headphones. You’ll want to be aware of what’s going on around you.

Additionally, if you tend to run early in the morning or late at night, leave the headphones at home for safety. This is especially important for females who need to be aware of their surroundings when there are fewer people around and it’s darker.

Pros and Cons of Different Headphones 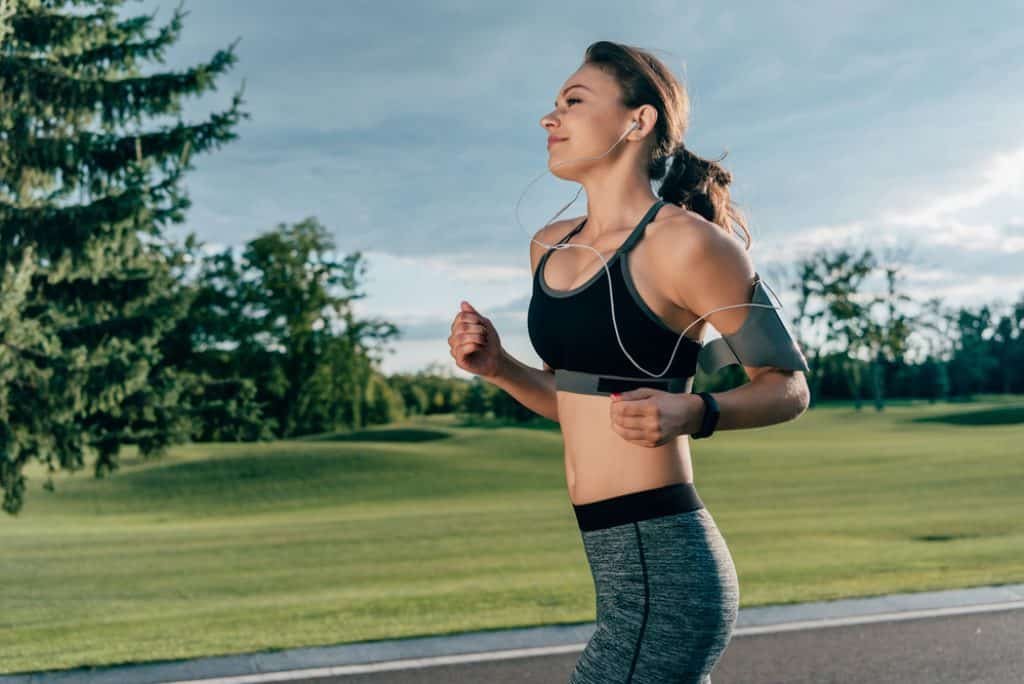 Every person is different, so figure out what’s best for you. But we’ve included some basic considerations for a couple different types of headphones.

Obviously, with wired headphones, you’re going to have a cord, which means that it could interfere with your running at some point if the cords get tangled or something like that. In addition, most smartphones today don’t have headphone jacks, so you might need a special cord.

But you’re going to get a better listening experience with wired headphones and you know that they won’t die mid-run, so they are a more reliable option than wireless headphones. Plus, if one starts to fall out for some reason, it will still be connected to the cord, so you won’t lose it.

Wireless headphones are great because you don’t have to worry about a wire, and you can use them with any device that has bluetooth capabilities. But the sound quality likely isn’t going to be as good as wired headphones, and there’s always a chance that you might do something funky and one earbud could fall out.

If you want sound to bypass your outer and middle ear and instead go straight to your inner ear using your bones as a conductive element (that’s right!) you’ll need to choose bone conduction headphones.

You don’t put them in your ear. Instead, they sit on top of your ear. Those who suffer from hearing loss, who are in the military, or who are runners really appreciate their functionality. If you’ve never tried them before, they might be worth investigating.

The other advantage to this style of headphone is that it allows you to hear ambient noise. This is ideal for running outside when you want to hear cars, dogs, and people approaching you. From a safety standpoint, this is a great feature.

In-ear headphones are much more common, and you likely have several pairs lying around your house. In terms of convenience, they’re the better option, but bone conduction will give you a better performance while running.

Pros and Cons of Different Devices

Depending on how old-school or new-fangled you are, you might have different preferences for devices, but each one has its advantages and disadvantages. You just have to decide what you like best!

The great thing about using your smartphone as a music device is that it can double as a GPS watch or just as a general safety device. You won’t have to worry if you need to call someone or if you don’t have a running watch. Your phone can provide for those needs and give you tunes.

At the same time, today’s smartphones are so bulky, so it might be incredibly uncomfortable to bring your phone with you. I had an iPhone 5c before I upgraded either this year, and it was much easier to carry with me while running. My phone now is much larger and harder to carry.

Although MP3 players are really a thing of the past, they can be great running devices because you won’t have any distractions like text messages or email notifications. And they are typically quite a bit smaller than your average smartphone.

At the same time, you don’t have the versatility of a smartphone. No using your phone as a GPS watch or to call someone if you need to. An MP3 player is for music only.

If your running watch has the capability to play music, then you can kill two birds with one stone—track your runs and listen to music. And you won’t have to worry about an additional device, so that’s a plus.

On the flip side, it might be harder to scroll through music, so you’ll have to have a pre-set playlist, and you’ll probably have to use wireless earbuds or headphones. If you prefer wired headphones, this could be a downside.

Pros and Cons of Different Ways to Carry a Device 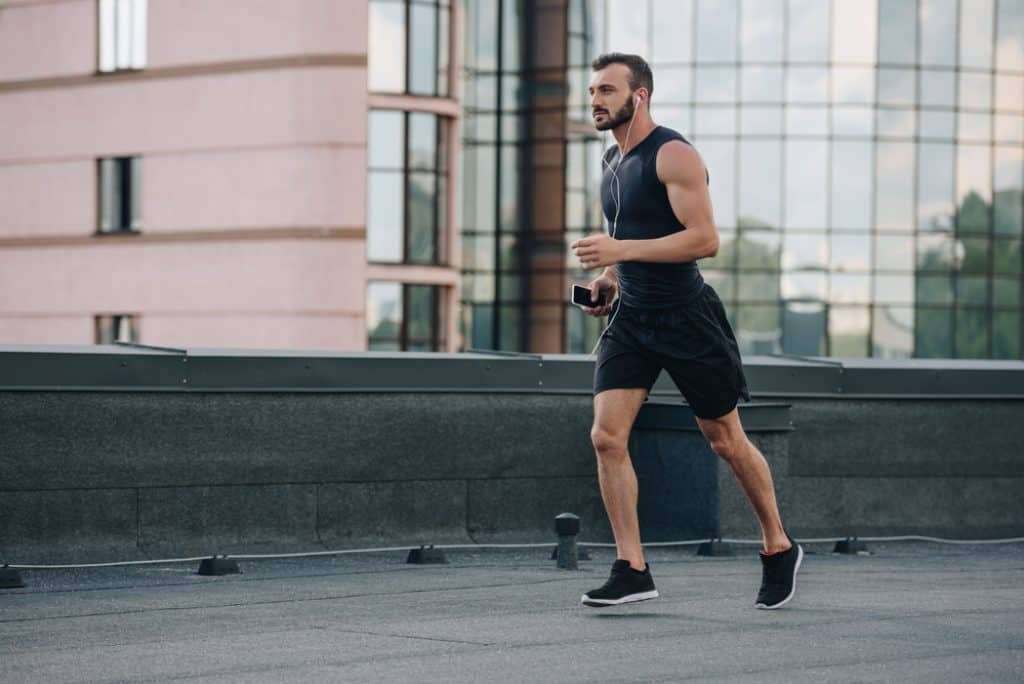 As a low-tech solution, you can always put your phone/device in your shorts or pants pocket. This is likely a better option for men, as they have deeper pockets. Even so, you might be able to fit a device into a side pocket of leggings for women.

If the pocket doesn’t have a zipper, you always risk the possibility of your phone falling out, and you’ll likely feel it when you run so it might not make your run particularly comfortable. Plus, it might be hard to reach your phone mid-run if you need it.

Armbands are a popular option to carry your phone, especially for women. You can access your phone more easily during your run if you want to scroll through different songs or whatnot. Plus, because it’s on your arm, you’ll always have an eye on it and make sure that you don’t it.

As a downside, though, one arm is going to be more heavily weighted, which might impact your running. You might feel a bit lopsided, and this could make your run more uncomfortable and less effective.

Finally, you can always try a running belt. It will require an additional purchase and is an additional item that you have to wear, but then you can ensure that your phone will be proportionally balanced on your body.

Plus, you can zip most running belts, keeping your music device secure, and you’ll be able to easily access it during your run, although not quite as easily as an armband. If you want the benefits of a pocket and an armband, a running belt is a nice medium.

In the end, it will take a little bit more coordination to run while listening to music than to go without. But there are definitely quantifiable benefits if you want to include some tunes on your run. With these tips in mind, running and listening to music will be a breeze!