Home » Beginners » Beat the Heat with These Summer Running Tips

Beat the Heat with These Summer Running Tips

Rachel Basinger
No matter where you live, whether it’s Florida or Alaska, summer can be hot. And there is nothing that makes most runners fear a workout more than a steadily climbing thermometer. But just like we can’t take the winter off once the temps get too cold, we can’t take the summers off, either. Running in the heat isn’t necessarily a deal-breaker. You just need a few strategies to make sure it remains as enjoyable as possible, even if you are going a little slower and sweating a little more.
In this article, we’ll talk about running in the summer heat, why it’s hard, and tips to make summer runs easier. Soon, you won’t be dreading those summer runs quite as much. 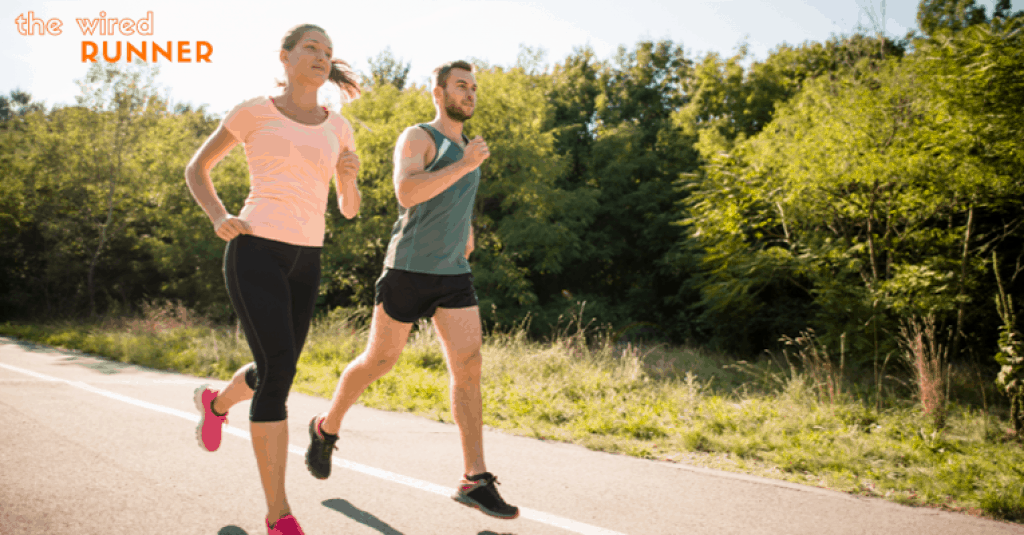 Why is it so hard running in hot weather?

Running in hot weather is hard because it impacts both short-term and long-term performance, predominantly in four different ways.

Because it’s hotter outside, your body will struggle more to keep your temperature down, and that’s just plain uncomfortable. You sweat more and can exert yourself less. When you run a fever, your core body temperature is up and you feel awful, more so if it’s a higher number. It’s the same with running in heat. And because your body needs to cool itself in order to perform at its best, hot-weather running is extra taxing.

Because your body starts to heat up faster in the summer, your blood is diverted to your skin so that it can help cool you down through sweating. This means that less blood is available to transport oxygen to your muscles. The result? You can’t run as fast or as hard.

It also becomes harder to maintain or increase your pace. Some have likened this phenomenon as being somewhat similar to altitude training.

Anyone can tell you that you’ll get more dehydrated in the hot and humid weather of summer. And this can have disastrous effects—your body can’t sweat as much when your fluid levels drop, meaning you can’t control your body temperature as well, limiting your performance.

It makes sense that running in the heat would affect your workout, but it also impedes your recovery. After you’re done working out in hot conditions, your body has to spend more energy on cooling itself when it should be delivering nutrients to your muscles.

This means that you recover more slowly after running in the heat because your body is cooling itself and trying to deliver nutrients. As a result, you won’t be as fully prepared for your next workout as you would in the spring or fall. 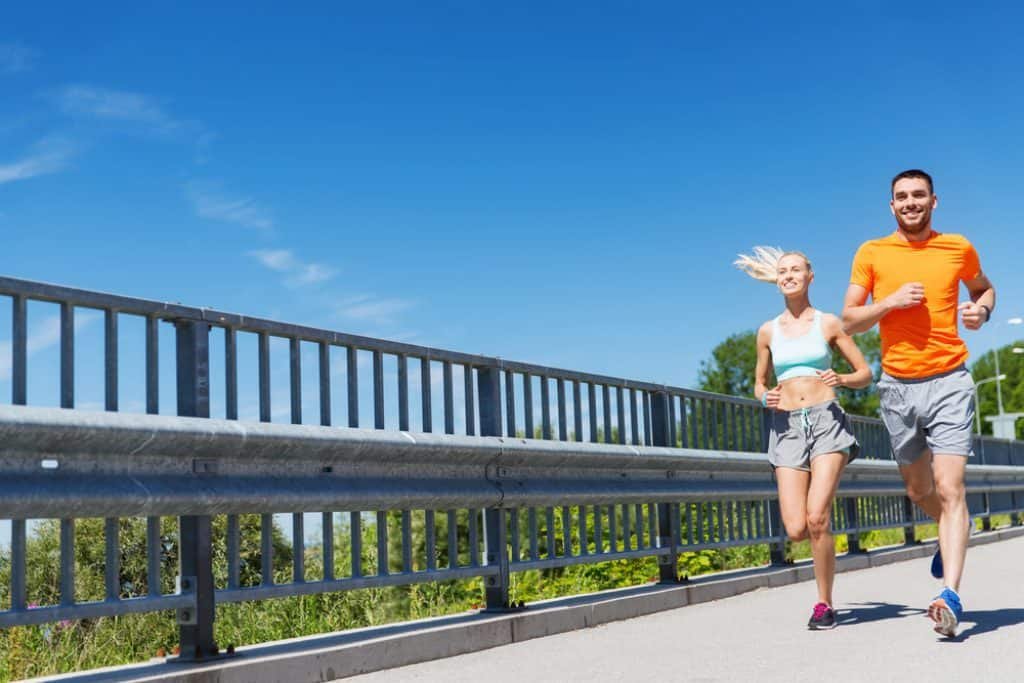 Tips to stay cool and safe

Okay, now that you know why it can be so challenging to run in hot weather, let’s look at some ways you can make it a little better.

When the days start to get longer and the weather starts to get hotter, it’s not the time to push. Instead, it might be the time to slow down and take it easy for a week or two to adjust to the new climate.

You might consider making the first week or two of summer when it’s starting to get really hot like your recovery week after a race. There’s no need to push. You want to make sure that you have a sustainable program for the summer.

Hydrate before, during, and after your run

This step is key in order to successfully run in the summer. You’ll want to make sure that you’re properly hydrated before, during, and after your run.

Since sports drinks have a higher carbohydrate content, they tend to absorb slower. Drink water or diluted sports drink before you run. You’ll want as much fluid in your body as possible, and the full-strength stuff can be difficult to digest, especially in the heat.

It’s just as essential that you hydrate during your run. Even if you don’t typically run with water like me, it’s a good idea to carry a bottle in the summer. Bring water with you, drop water along the route, or run loops with water stored in your car or house. Whatever your strategy, you’ll want some water even for short and easy summer recovery runs.

You might want to consider a sports drink or recovery beverage after you run. It won’t matter as much that it absorbs slower. The major goal is to replace the fluid you lost during your run.

Each season of running has its different gear. In the summer, you’ll be well-served by light-colored, loose-fitting clothing that wicks moisture. Even if you have a pair of dark shorts that you always run in, you might want to consider buying a new lighter-colored pair for the summer.

In addition, you might consider wearing a mesh, lightweight hat with a brim to keep your face protected as well as sweat-wicking socks to prevent blisters. Finally, don’t forget about Body Glide to prevent chafing and blisters. And of course lots of sunscreen. 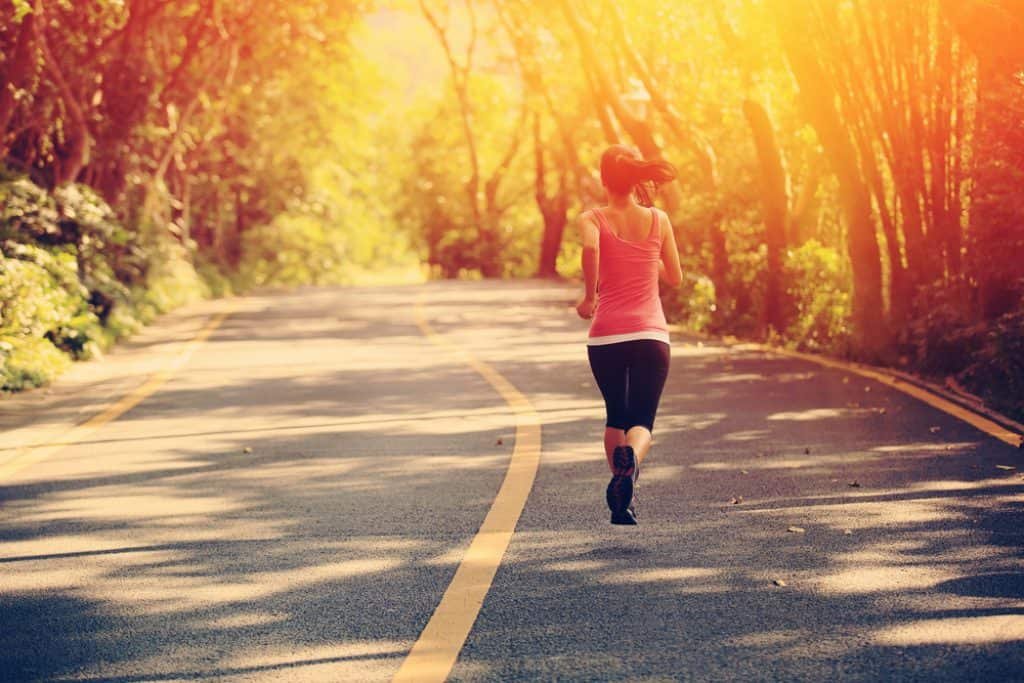 Run at the coolest time of day

However, I live in the South by the beach, and it’s already 80-something by 5 am with a heat index pushing the temperature into the 90s. And it’s worse in the evenings. I’ve had to cut back how hard I’m pushing. You might even want to consider running indoors if you have a hard workout.

Run in the shade on trails, grass, crushed gravel or other non-asphalt surfaces

It goes without saying to run in the shade. This will make the temperature significantly lower than if you’re running in full or partial sun. But you might not have that option available to you depending on where you live, so try to run on non-asphalt surfaces that will be cooler. Any paved surface, like asphalt or concrete, radiates a significant amount of heat, and can make the air much warmer.

Summer is really the time for trail runs, because you’re running on dirt, grass, and crushed gravel and are often in the shade. Even if it’s a little bit farther away, you might want to consider spending the majority of your summer running on trails.

The heat is going to impact your pace. Probably more than you might think. It’s going to take much more effort to run at a given pace than in the spring or fall. Summer is the time to really get in tune with your body and run by feel, ignoring actual pace. Don’t be surprised to find yourself running 30 or even 60 seconds per mile slower than in cooler temps.

Also, don’t be afraid to take walk breaks if necessary. The idea is to get a workout in. If you’re able to finish a 3 mile run by walking for 1/10th of a mile of it in the middle, do that. That’s better than only being able to run 2 miles.

If you’re curious how much heat will impact your running paces and times, you can check out this calculator. 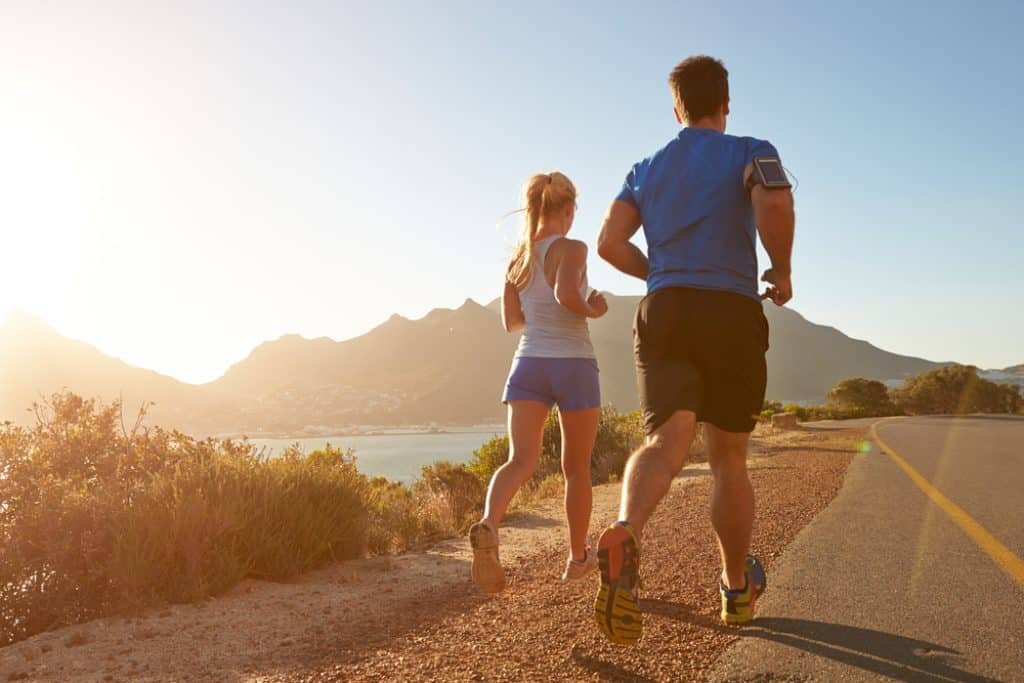 Watch for signs of heat illness

Finally, you need to be on the alert for any signs of heat illness. The last thing you want to do is put yourself in a bad position physically just because you were trying to get in a run.

As the name suggests, heat cramps are brief-but-painful muscle cramps that occur during exercise in a hot environment. They can, however, begin a few hours later and typically involve muscles like calves, thighs, and shoulders.

One possible solution, especially if you are still running high mileage in the summer, is salt tablet. Many believe heat cramps to be caused by electrolyte problems. That being said, it doesn’t take too many salt tablets to exceed what is healthy; they aren’t energy chews. If your symptoms don’t improve, see a doctor about whether your heat cramps have progressed into a more serious heat injury.

If you’re suffering from heat exhaustion, it’s because you’ve been in high temperatures and often are dehydrated. One major cause of heat exhaustion is water depletion. Absent enough fluid in your body, you’ll feel excessive thirst, weakness, headaches, and even loss of consciousness.

Another cause can be salt depletion. This might cause you to suffer nausea and vomiting, muscle cramps, and dizziness. Heat exhaustion isn’t as serious as heat stroke, but it’s serious enough to warrant your very careful attention. It can lead to much worse if it’s not taken care of.

The most serious form of heat injury, heat stroke is considered a medical emergency. It’s also known as sunstroke, and can kill or cause damage to the brain or other internal organs. Individuals over 50 are more likely to suffer from heat stroke, but it can impact anyone.

The hallmark symptom of heat stroke is a body temperature above 104 degrees. Fainting is another common occurrence. In addition, heat stroke typically occurs as a progression from milder heat-related illnesses, so you need to take those seriously.

In the end, summer isn’t likely going to produce your best workouts because you’re going to have to work that much harder on your runs. But you can make your summer runs a little bit better and more enjoyable by following these tips! And soon, the ideal running temperatures of 50s-60s will come back.