Home » Training » 8 Ways To Run Fast Without Getting Tired

8 Ways To Run Fast Without Getting Tired

In this article, we’ll discuss how you can run faster. We’ll especially target those who are new to running and who are having some difficulties improving their speed. By the end, you’ll have a good idea of specific steps to take going forward.

Before we discuss the eight ways, I do want to note that it will take a bit of a time investment to start to see progress. You have to realize that you’re not going to take minutes off your mile time in a week. Building a base of fitness and a certain amount of strength is critically important.

But if you are willing to work at it for a month or two, chances are that you’ll get faster. How much? It all depends. You just have to be willing and able to put in some time and hard work to see results. And the bigger the results, the longer and/or more intense time investment you’ll have to put into it. 1. Set a Goal to Run Faster and Longer

Now, write down these goals. Research shows that people who write down their goals are much more likely to accomplish them than those who don’t. Give yourself plenty of time to meet your goals, but not so much time that you’re going to be bored.

Finally, keep it up. You’ll run faster and longer just by running on a consistent basis. You may even want to try a process goal, like running every day, as opposed to an outcome goal like running a 7-minute-mile. Why? Because you’ll see the results when you keep something up on a regular basis.

How to Run Faster

The best way to run faster and to burn more calories is to add speed work to your training. There are three main categories of speed work: tempo runs, intervals, and fartleks.

Tempo runs are the most demanding, but also the most productive. Run at a sustained pace about 30 seconds slower than your fastest 5k time. A tempo run should feel “comfortably hard,” and last anywhere from 15 minutes up to about an hour.

An easier place to start your speed training is intervals. These feature shorter distances – maybe as short as 200m, or half a lap of a track. Over the weeks, gradually increase the distance or time. For example, start with doing ¼ mile intervals at a quicker pace (maybe a goal time that you’d like to reach like a 7-minute-mile) with intervals of walking or jogging in between.

Fartleks are similar to intervals. They are random distances, though,rather than repeats of a single distance. Fartlek is Swedish for “speed play.” The idea is to always keep your body guessing so that it doesn’t get used to anything. So go kinda faster for five minutes, really fast for 1 minute, and whatever you want to mix it up. 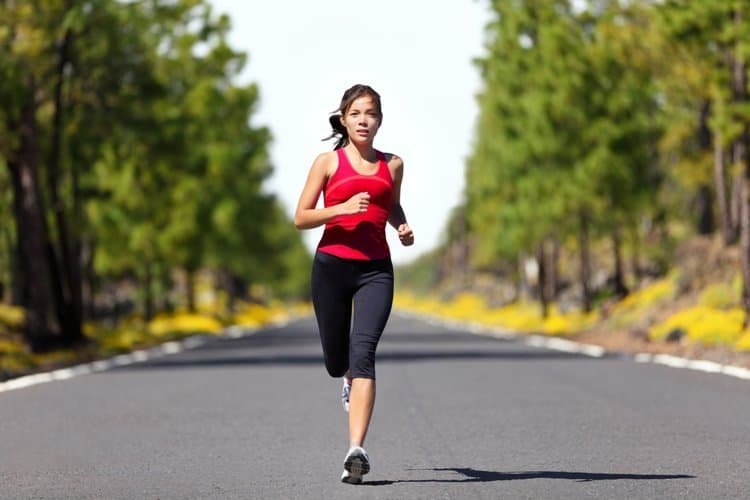 Something else that I have tried and had great success with is running really hard for the last 1/10 mile or so. My thought was trying to train myself to push hard at the end like I would for a race. This has improved my speed quite a bit.

How to Run Longer

Whereas running fast intervals builds the mechanics to run faster, adding miles to your training is also a reliable way to increase pace. If you want to be fast, you need a strong aerobic engine, and long slow distance is where this is built.

If you want to run longer, your course of action is slightly different. Start by adding a longer run once a week to increase endurance. Typically, people do these on the weekends because there is more free time, but obviously, pick a day that works for you.

You don’t have to push yourself really hard on these longer runs. In fact, don’t push yourself hard. The point is to improve your ability to exercise in an easy zone. Just keep running for as long as you can. Even if you slow down some, at least you’re still running! Try to find a comfortable pace; you should be able to run while maintaining a conversation.

It’s okay to do these longer runs slower, especially when you’re going up hills if you feel winded. Elite runners who typically have 7-minute-mile paces or faster for long races like half marathons still do their long runs much slower, like a 9-minute-mile pace. The idea is getting the miles in, not the speed with which you do it. That’s what speed days are for.

Having a good warm-up routine when you incorporate some dynamic stretching and even a light jog before you start running will help you with speed and avoiding tiredness. You want to warm up so that your body is prepared for the work it is about to do.

Think about it like warming up a car on a cold day. We do that so that the engine is warm enough by the time that we want to drive. When you do a light jog or walk before you start your run, your body temperature is warming up so that it’s ready to go. This will impact your performance.

This is why experts recommend going a little bit slower on that first mile for a longer race. You want to give your body time to adjust and to get going. You’ll wear yourself out if you dash off on your run without warming up beforehand.

3. Fuel and Hydrate Before Your Run

Just like your car needs gas, your body needs fuel and hydration. In fact, you could substantially slow down your run time if your body doesn’t have the nutrients it needs.

If you’re running for over an hour, you’ll need to resupply with fuel and hydration during your run (although this does vary with intensity of the run as well as weather). You’ll want to take a gel or chew (along with water) every 30-45 minutes if you’re planning to run for over an hour. 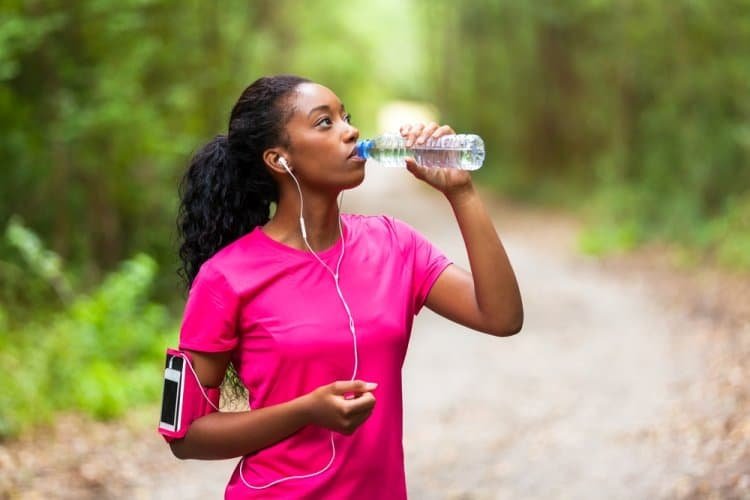 Make sure that you’ve gotten the nutrition you need before a run, although not too soon before. Take the necessary nutrition you may need during your run. Drink some water and get a snack with electrolytes. After your run, refuel with protein.

Your head should be looking forward. Your arms should be swinging front-to-back, not across your body. A quick stride turnover helps to prevent overstriding.Relax you shoulders and hold them low. Your body and back should be nice and straight, and your feet should land lightly, ideally on your midfoot.

Breathing properly can transform your runs. Not only will it give you more energy and make you able to run farther and faster, but also you should avoid those annoying side stitches that can plague runners.

If your exhale is always on the same foot, you’re increasing your chance for injury as well as running less efficiently. Try a 2:1 or 3:2 (odd) breathing pattern where you inhale for two or three steps and then exhale for one or two steps.

You can also use your breath to gauge your effort. A 3:2 pattern is fine for an easy run. If this starts to feel labored, or you find yourself needing to switch to a 2:1 pattern, slow down. 2:1 patterns are useful to sprint workouts and tempo runs, where the effort is substantially higher.

It’s easy to discount the importance of rest when you’re just getting into running. The idea is to schedule it strategically so that you’re making the most of your rest days and giving your muscles a chance to heal.

While there are successful training methods that deliberately build “cumulative fatigue,” running tired is not, in general, a good idea.

Make sure that you’re getting plenty of sleep each night. This will help you run better because your body is well-rested and getting the recharging that it needs. Schedule your rest or off days after hard runs. Your body needs a chance to heal so that you can keep getting stronger.

Runs can sometimes seem really long and/or hard if you don’t have something to do. Obviously, running with a friend can be a great option. I know that several miles can fly by when I’m running with friends. 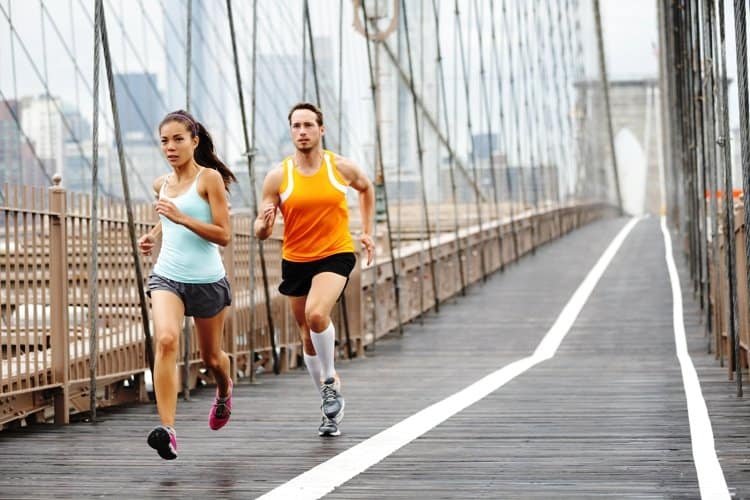 Other options include listening to music, audiobooks, or podcasts, and you can even use this as a motivation to run. Save something you really want to listen to for runs only.

For example, maybe there’s a podcast that you really love (for me, it’s Laura Vanderkam’s Before Breakfast). Listen to that only during your run. It will be a treat for you to go on runs and will help the miles go by faster.

You can also set goals during your run. Even the smallest things can keep you going. The brain tells the body that it’s tired while you still have plenty of juice in you.

For example, you can say that you’re going to run for one more minute or even run to the next telephone pole or landmark. Once you’ve done this, motivate yourself to do more.

Runners need strong legs to run fast, but also a strong core. That’s why it’s important to strength train in addition to running. You need to have a birds-eye view of your running in order to see the most benefits. Build a body that is balanced, flexible, and strong. The speed will follow.

The reason strength training will help you get faster is that you’ll need less energy to get your muscles to move. You will be able to run faster and longer than you were able to before strength training. This is backed up by years of scientific research.

Plus, it’s good for your brain to take a break from the running routine. Work some different muscles so that you’re less prone to injury. This is a great opportunity to try a group class like spinning or yoga, hit the gym and use weights, or even do other activities like cycling (which is great if you’re training for a triathlon).

In the end, if you give it enough time and put in the effort, you will definitely get faster. Way faster than you ever expected when you first started training. Keeping track of how long it takes you to run certain distances can be deeply rewarding when you see your progress!

But it’s definitely something you have to commit to. That’s why I’d recommend a process goal of running every day or four times a week or whatever it is. You’re not putting as much pressure on yourself, but you’re getting out there and running, and that ultimately is what is going to make you run faster.